People most at risk of catching coronavirus should be tested regularly and random testing is a waste of time, experts say.

Researchers from the University of Oxford suggest targeted, regular swab testing would do a better job of cutting Covid-19 infection rates than random tests.

They said health and care workers, public transport staff, delivery drivers and members of religious congregations or other large groups could be prioritised. And people living in inner city areas could be further up the priority list.

Currently only care workers and care home residents are routinely tested for Covid-19. Random testing is done in surveys to see how many people are carrying the virus.

Britain is in the process of scaling up its swab testing programme, with the Government pledging to hit a capacity of 500,000 per day by the end of October. Around 230,000 swabs are being carried out each day currently.

The system is currently struggling to cope with the numbers of people who are ordering tests because they think they might have Covid-19, but regular testing could become a feature in the future on the way to the Government’s ‘Operation Moonshot’ ambition to test everyone every week – some 10million tests per day.

‘Focusing testing on groups who are at particular risk of spreading Covid-19 at regular intervals is a far better use of scarce testing resources than testing the entire population at random,’ said Oxford’s Dr Daniel Susskind.

A current list of testing priorities sees NHS patients at the top of the list, with care homes second followed by NHS staff and teachers, above members of the public.

Similar lists of rationing have been suggested for a vaccine, which could be given to the most at-risk people first to slow or stop the virus spreading to lower risk groups. 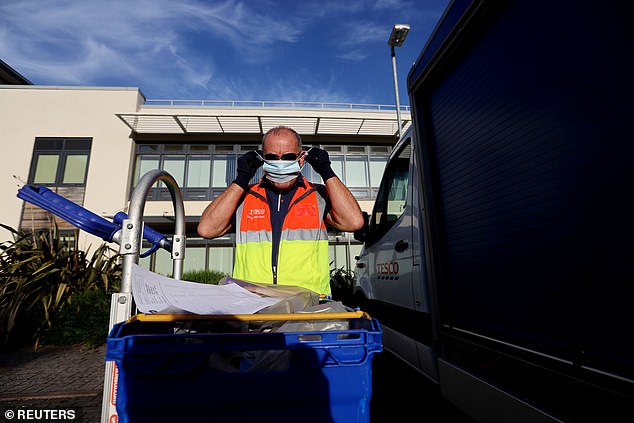 Delivery drivers and other people who have to travel to meet multiple people every day for work should be considered at high risk of Covid-19 and tested regularly, scientists say (Pictured: A Tesco delivery driver in Stoke-on-Trent) 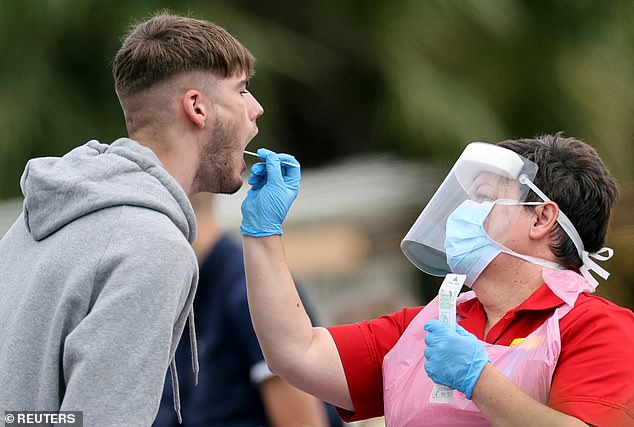 When mass testing is available it should be prioritised for people who are most at risk of having the disease, according to experts. This would make it more likely that the system would detect infections (Pictured: A man receives a swab test in Stone, Staffordshire)

The Oxford team explained that random testing would always involve people who have an extremely low chance of testing positive for the virus.

Those generally considered to have a low risk are people who live in remote, rural areas, who don’t have many social interactions and who work from home or in jobs away from people.

Swab testing low-risk people for no reason, the researchers said, would be a ‘waste of resources’ and lead to a programme missing people at higher risk.

Not everyone carries an equal risk of catching or spreading the coronavirus and the likelihood changes depending on someone’s location, job and social behaviour.

For example, if random testing picked out 100 people from Birmingham and 100 from Devon it could end up sending too many tests to Devon but not enough to Birmingham.

People living in cities are more likely to catch and spread Covid-19 because they live closer together, come into contact with more strangers and use public transport.

HOW DOES THE UK PRIORITISE COVID-19 TESTS?

Coronavirus tests are generally only available in the UK if people have symptoms of the illness – a cough, a fever or a lost sense of taste or smell – or if they are taking part in a study.

This is how coronavirus tests are rationed, ranked in order of priority:

Randomisation also means that some people or groups of people might get tested more often than others, regardless of whether their risk is any higher.

‘Governments around the world are looking for a testing strategy for Covid-19,’ said Dr Susskind, an economist.

‘This strategy will inevitably be constrained by our testing capacity: in short, every person in the world cannot be tested every day.

‘Given these constraints, which still bind us many months into this crisis, we need to focus again on a testing strategy that is workable, efficient and affordable for the government.’

He added: ‘We have seen over the course of the pandemic that certain groups, such as healthcare and social care workers that are in frequent close contact with others, are more likely to pass on Covid-19 than other groups, for example those working from home.

‘Focusing testing on groups who are at particular risk of spreading Covid-19 at regular intervals is a far better use of scarce testing resources than testing the entire population at random, as has recently been discussed globally.’

In the groups who could be first in line for regular testing, Dr Susskind and colleagues suggested people who take part in large religious gatherings such as church services.

Public transport workers and delivery drivers could also be prioritised because they travel a lot and come into contact with large numbers of people.

‘Random testing wastes a lot of resources,’ Dr Susskind said. ‘This is because every day, some of those tested will have been tested the day before, while others who could be infectious will, nevertheless, not be tested and could continue infecting people.

‘A more useful testing programme is to test members of an identified group at regular intervals – for example, testing a different fifth of the group on a rotating schedule.’

A report published by the Office for National Statistics in June shone a light on the industries which had higher-than-average Covid-19 death rates during the peak of the crisis.

Groups with higher death rates are also likely to have higher infections, meaning this data could be used to work out who is most at risk. 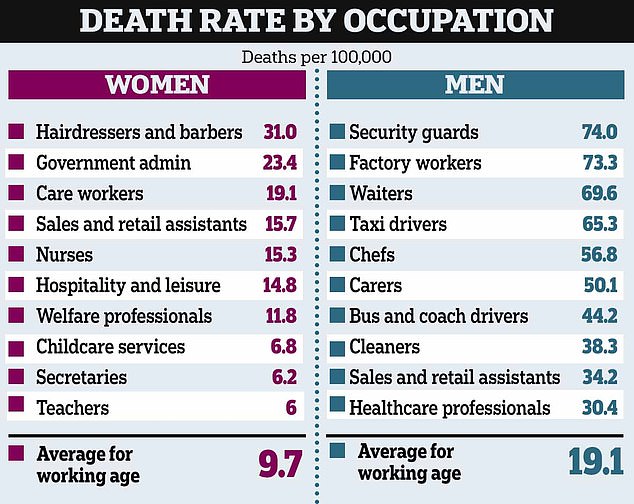 Office for National Statistics data in June shone a light on the occupations in which people were more at risk than average of dying of coronavirus, which suggests those industries also experience higher-than-normal chance of catching the virus

One major benefit of regular testing would be that it could catch people who are infected with Covid-19 and could pass it on but don’t have symptoms so are unaware.

These people are not currently picked up the Government’s testing programme because only people who are showing signs of illness are eligible to get tested.

Dr Susskind added: ‘Regular testing within key groups would limit spread, especially for those spreaders who are asymptomatic.’

His paper ‘A workable strategy for COVID-19 testing: stratified periodic testing rather than universal random testing’ was published in the journal Oxford Review of Economic Policy.

Why should you invest in emerging markets? Investing Show