Peerless Rangers swept aside Aberdeen to end the Scottish Premiership term unbeaten before officially lifting the Scottish title for the 55th time.

Steven Gerrard’s side are the first to go unbeaten since Brendan Rodgers’ Celtic in 2016-17 and also matched their city rivals’ 107-year-old clean-sheet record.

Rangers’ task was made easier by Joe Lewis’ unfortunate early own goal, with Kemar Roofe adding further efforts either side of the break, and Jermain Defoe scoring a late fourth.

The Ibrox side lived dangerously at the back in the second half but survived with their goal intact to finish the campaign having gone 26 league games without conceding.

The 13 goals they have conceded is one fewer than Celtic allowed in the 1913-14 season.

And, having won all 19 home league games, Rangers match the feat achieved by Martin O’Neill’s Celtic, who ultimately went on to win 26 consecutively between 2002 and 2004.

Rangers have now not lost to Aberdeen in eight meetings, winning all four of their encounters this season, including two 4-0 wins at Ibrox.

Having not scored in their previous four most recent visits to Ibrox and having already finished in fourth place, Stephen Glass’ side started like one with little to play for and little belief that they could end Rangers’ dominance.

Contrasting fortunes of rival captains handed Rangers the initiative as a James Tavernier cross struck defender Jack MacKenzie and goalkeeper Lewis contrived to divert a ball that looked to be spinning wide into his own net.

The sound of chanting fans anticipating the post-match trophy presentation continued to grow outside Ibrox from a low murmur to a constant hum – interspersed with the wail of the occasional police siren – as Rangers extended their lead.

Ryan Kent forced his way past Connor McLennan’s weak tackle to make it to the bye-line and his low cross into the six-yard box is flicked towards goal by Kemar Roofe and in off the again unfortunate MacKenzie.

A double substitution by visiting manager Glass turned the tide – but without improving the scoreline.

Unmarked substitute Fraser Hornby failed to turn in a Ryan Hedges cross to the back post, Lewis Ferguson fired against the underside of the bar with an even more open goal gaping, and SPFL Premiership player of the year Allan McGregor produced a series of saves.

However, two defensive slips allowed clinical Rangers to add the gloss to an outstanding season as Roofe and Defoe stroked past a hapless Lewis. 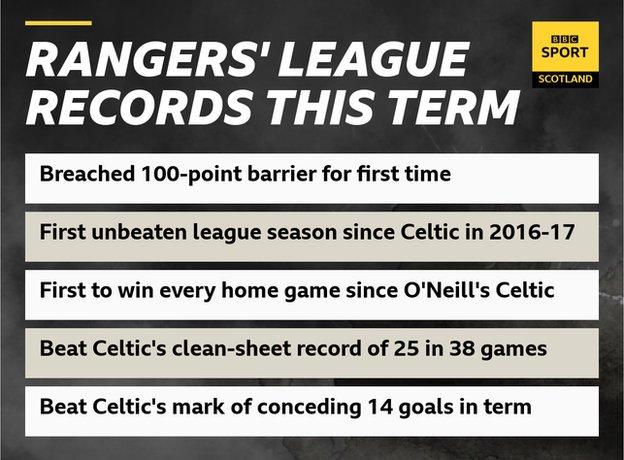 Man of the match – Kemar Roofe

Some players will go this summer, but Gerrard will no doubt think he is building the foundations of a squad that can repeat their dominance in the Premiership next season.

Rangers eased to victory over Aberdeen despite looking like they had one eye on the post-match trophy presentation, although a few scares at the back suggest that defence might be the one area where strength in depth needs improving.

Aberdeen will wonder why they did not start the first half as positively as they did the second.

While the opening 45 will have underlined to recently appointed manager Glass the work that needs done in the summer, the second will give him some signs of hope for the future – and who in his squad is up to the task.

Rangers move into a pre-season when Gerrard will look to consolidate their dominance of the Scottish top flight but more immediately prepare for the Champions League third qualifying round in August. Aberdeen’s Glass has a bigger rebuilding job ahead of the second qualifying round in the new European Conference League in July.