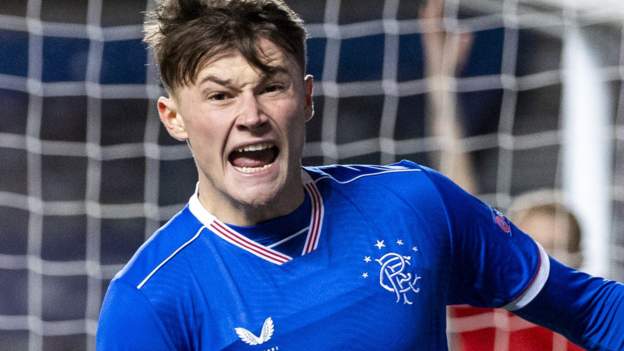 Rangers completed a gloriously chaotic 9-5 aggregate win over Royal Antwerp at Ibrox to reach the Europa League last-16 for the second successive season.

Half-time substitute Nathan Patterson scored 19 seconds after coming on to restore Rangers’ lead on the night after Alfredo Morelos and Antwerp’s Lior Refaelov had traded goals.

Ryan Kent quickly made it 3-1 before Didier Lamkel Ze replied in a breathless start to the second half, but penalties from Borna Barisic and Cedric Itten dispelled any doubts.

Rangers will discover their last-16 opponents in Friday’s draw at 12:00 GMT.

The anarchic entertainment of the first leg in Belgium had a set a high bar, but both sides once again threw off the shackles and went for broke.

In a frenetic start, Kent – a non-stop blur of blue – stood out. The Rangers winger’s direct running had the visitors on the back foot and after sending two efforts skidding wide of the far post, his pressing led to the opener.

Antwerp centre-back Jeremy Gelin attempted to play himself out of a tight spot by rolling a pass back to goalkeeper Ortwin de Wolf, but Kent was on him in a flash to intercept and cut the ball back Morelos to slot into the unguarded net.

Rangers looked in the mood for more and Ianis Hagi’s stinging drive had to be parried away by De Wolf at the near post.

It took Antwerp half an hour to finally gain a foothold and Jordan Lukaku’s cross was volleyed wide by fellow wing-back Aurelio Buta to serve a reminder that the visitors carried a threat.

Antwerp still needed two more goals without reply to progress, but Rangers’ composure had deserted them and Balogun picked up a booking that rules him out of the last-16 first leg.

Balogun was tormented again by Lukaku – who nutmegged his marker but could only fire into the side-netting – before being put out of his misery as Gerrard replaced him with Patterson at half-time.

It was a chance of redemption for 19-year-old Patterson, one of five Rangers players who had earned a club fine and the wrath of manager Steven Gerrard after breaching Covid-19 rules by attending a party.

He had 45 minutes, but needed only 19 seconds to make an explosive impact as he latched on to a Morelos pass down the right and drove into the box to slam an unstoppable finish into the far corner.

Few players thrive on the big European occasion more than Morelos and he provided another assist as Rangers earned some breathing space. The Colombian knocked the ball past Martin Hongla down the right and beat him for pace to square for Kent to blast past De Wolf.

Game over? Not quite in this crazy tie. Rangers were exposed at the back moments later as Rafaelov’s lofted pass picked out Didier Lamkel Ze to nip past McGregor and tap in.

Antwerp had more than half an hour to press for the further goals they needed. But Rangers finally put the tie to bed when Morelos was tripped by Maxime Le Marchand and Barisic left De Wolf helpless with a perfect penalty into the corner.

Gloss was added in stoppage time as Nana Ampomah clambered over Scott Wright and fellow substitute Itten blasted his spot-kick down the middle.

Man of the match – Alfredo Morelos

Oprah Winfrey asks teen Mary-Kate and Ashley Olsen ‘what size are you?’ in unearthed 2004 interview