Rare 2,000-year-old Roman gold coin is expected to fetch ‘up to £5 MILLION’ at auction in London

Rare 2,000-year-old Roman gold coin commemorating the assassination of Julius Caesar is expected to fetch ‘up to £5 MILLION’ at auction in London

A rare gold coin which commemorates the assassination of the Roman general Julius Caesar is expected to auction for ‘over £1.5 million’ this month.

Over two millennia old, the token is one of three of the same design known to have been cast in gold, making it the ‘holy grail’ for ancient coin collectors, experts said.

The minting of the coin has been described as a ‘naked and shameless celebration’ of Caesar’s murder two years previously in 44 BC.

The assassination was prompted by concern among the Roman senate that Caesar — having recently been named ‘dictator in perpetuity’ — would name himself king.

Fear of this tyranny fostered a conspiracy of 60 senators who ended up stabbing the statesman 23 times, according to history’s first recorded autopsy.

Caesar had, however, been popular with the Roman lower and middle classes — and the uproar in the wake of his assassination set in motion the fall of the Republic. 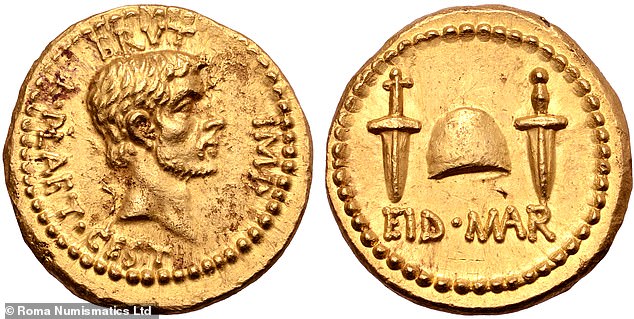 A rare gold coin which commemorates the assassination of the Roman general Julius Caesar is expected to auction for ‘over £1.5 million’ this month

The coin ‘was made in 42 BC, two years after the famous assassination,’ Mark Salzberg — the chairman of the Numismatic Guaranty Corporation of Sarasota, Florida, which confirmed the authenticity of the coin — told Fox News.

‘The front has a portrait of Marcus Junius Brutus — one of Caesar’s assassins — and the other side dramatically has two daggers and the words EID MAR, a Latin abbreviation for Ides of March,’ he added.

It also features a ‘cap of liberty’, signifying the motivations behind the murder — and on the other face, the date of the deed.

The item, Mr Salzberg explained, is ‘one of the most important and valuable coins of the ancient world.’

Nearly 100 of such ‘Ides of March’ coins are known, according to the Numismatic Guaranty Corporation — however, most are cast in silver, and even these are considered essentially unobtainable by aficionados.

Only two others in gold are known to exist — one of which is on display in the British Museum, while the other resides in the permanent collection of the Deutsche Bundesbank, the central bank of the Federal Republic of Germany. 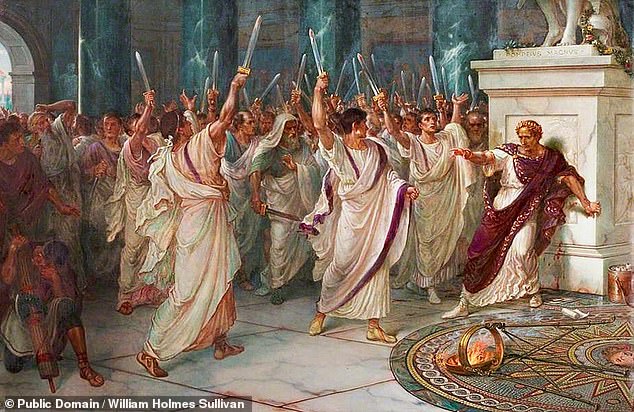 The minting of the coin has been described as a ‘naked and shameless celebration’ of Caesar’s murder two years previously in 44 BC, as depicted. The assassination was prompted by concern among the senate that Caesar — having recently been named ‘dictator in perpetuity’ — would name himself king. Fear of this tyranny fostered a conspiracy of 60 senators who ended up stabbing the statesman 23 times, according to history’s first recorded autopsy.

Held until now in a private collection in Europe, the mint-condition gold coin will be sold at auction by London-based Roma Numismatics on October 29, 2020.

‘We are extremely privileged to bring this coin to auction with the invaluable assistance of Numismatic Guaranty Corporation, whose expert specialists have assisted in authenticating it,’ said Roma Numismatics’ director Richard Beale.

Although the coin has been given a conservative pre-sale estimate of £500,000, it is expected to go for considerably higher — and may well become the most expensive Roman gold coin to have ever been sold.

‘Considering the coin’s rarity, artistry and fabled place in history, I would not be surprised if it sold for several million,’ Mr Salzberg told Fox News.

In fact, Numismatic Guaranty Corporation expert Barry Murphy has suggested it could reach the heights of £3–5 million in the auction.

How England spent almost half a millennium under Roman rule

55BC – Julius Caesar crossed the channel with around 10,000 soldiers. They landed at a Pegwell Bay on the Isle of Thanet and were met by a force of Britons. Caesar was forced to withdraw.

54BC – Caesar crossed the channel again in his second attempt to conquer Britain. He came with with 27,000 infantry and cavalry and landed at Deal but were unopposed. They marched inland and after hard battles they defeated the Britons and key tribal leaders surrendered.

However, later that year, Caesar was forced to return to Gaul to deal with problems there and the Romans left.

54BC – 43BC – Although there were no Romans present in Britain during these years, their influence increased due to trade links.

43AD – A Roman force of 40,000 led by Aulus Plautius landed in Kent and took the south east. The emperor Claudius appointed Plautius as Governor of Britain and returned to Rome.

47AD – Londinium (London) was founded and Britain was declared part of the Roman empire. Networks of roads were built across the country.

50AD – Romans arrived in the southwest and made their mark in the form of a wooden fort on a hill near the river Exe.  A town was created at the site of the fort decades later and names Isca.

When Romans let and Saxons ruled, all ex-Roman towns were called a ‘ceaster’. this was called ‘Exe ceaster’ and a merger of this eventually gave rise to Exeter.

122AD – Emperor Hadrian ordered that a wall be built between England and Scotland to keep Scottish tribes out.

312AD – Emperor Constantine made Christianity legal throughout the Roman empire.

228AD – The Romans were being attacked by barbarian tribes and soldiers stationed in the country started to be recalled to Rome.

410AD – All Romans were recalled to Rome and Emperor Honorious told Britons they no longer had a connection to Rome.

Source: History on the net

Healthy Mexican Recipes – The perfect recipes for your tastebuds and body!