Rare supermoon lights up the night sky in spectacular fashion


Rare supermoon lights up the Australian night sky in spectacular fashion – so did you catch a glimpse of the ‘pink’ phenomenon?

If the fluorescent molten-orange orb pinned on the horizon was not pitched against the black night sky, you could be forgiven for thinking this April’s rare supermoon was a second sun.

The astrological phenomenon, dubbed the ‘Pink Moon’, captivated Australians as it ascended over the skyline on Tuesday evening. 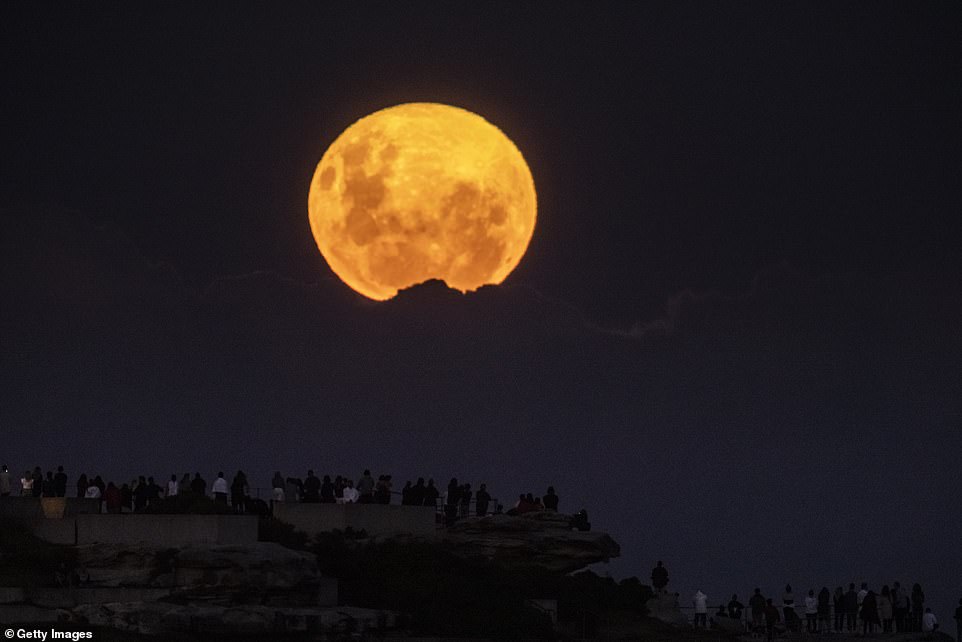 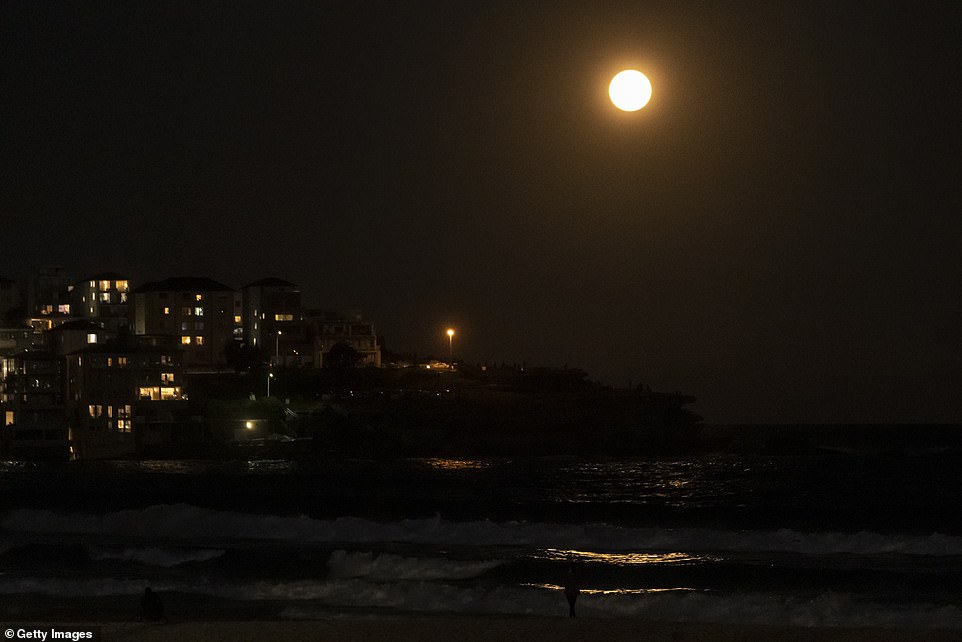 A full moon is called a supermoon when it is at it’s closest point to earth, making it look much larger and brighter 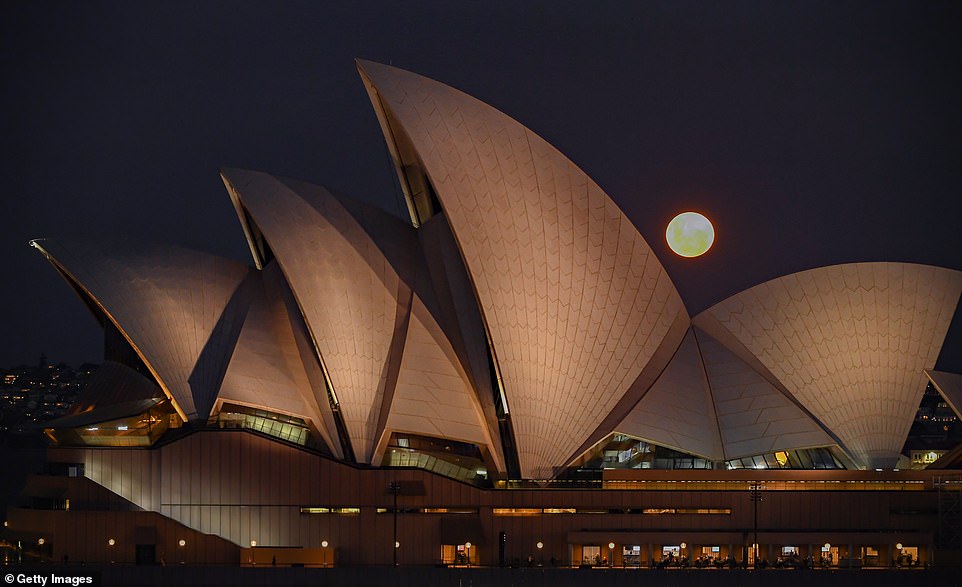 Sydneysiders flocked to the cliff tops at Bondi Beach to stare in amazement as the marvel hovered overhead, appearing almost close enough to touch.

A full moon is called a supermoon when it is at it’s closest point to earth, making it look much larger and brighter.

On average, supermoons are about seven per cent bigger and about 15 per cent brighter than a typical full moon – but this one was twice as dazzling.

With 30 percent more luminescent and 14 percent more voluminous than the usual full moon, this supermoon was a unique wonder as it hovered close to earth. 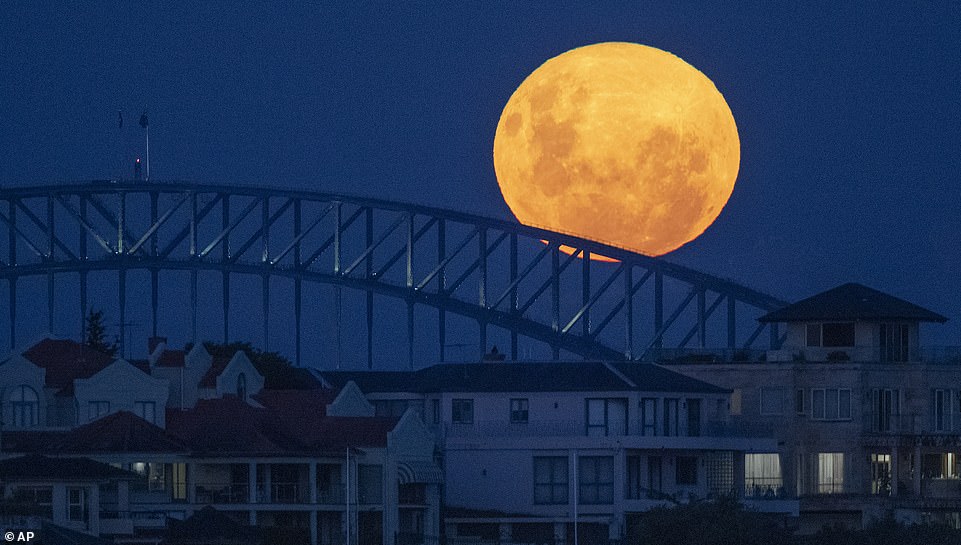 The astrological phenomenon towered over rooftops and the Sydney Harbour bridge, as the rare full moon was 30 per cent brighter and 14 per cent bigger than normal 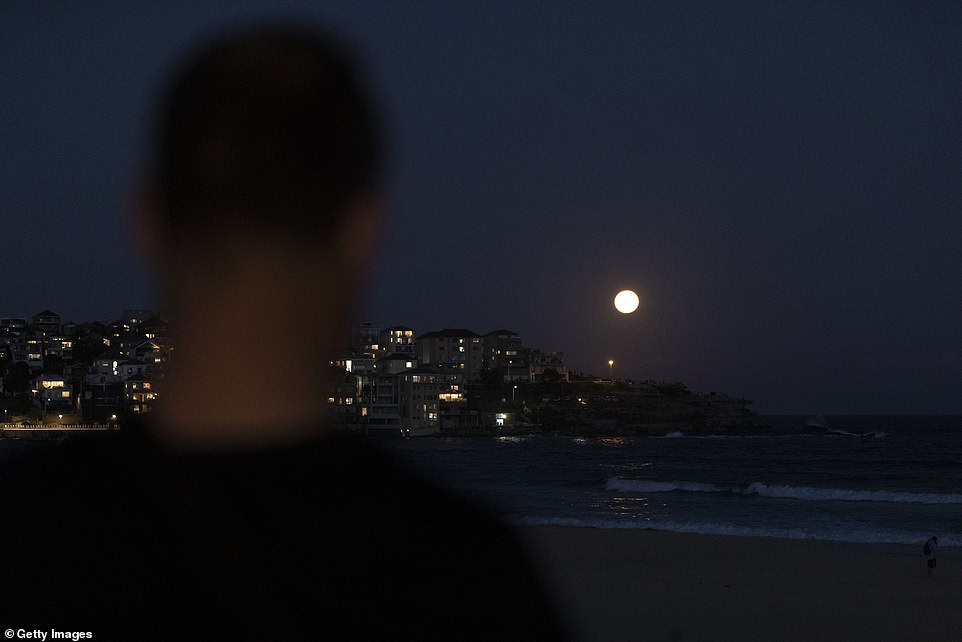 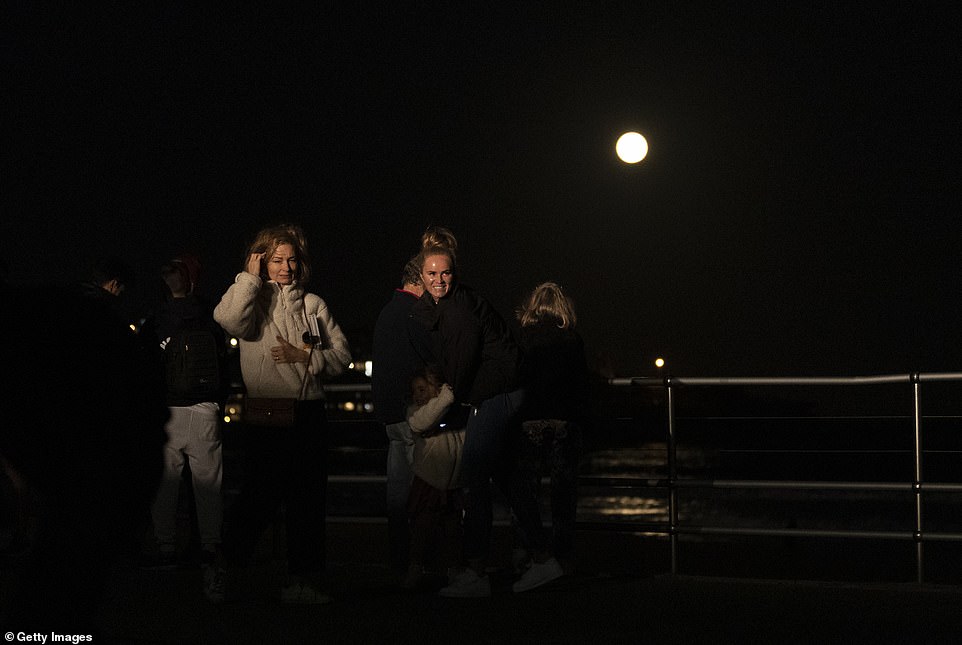 The name derives from the early springtime blooms of certain flowers native to eastern North America that are commonly known as creeping phlox – but has been referred to ‘moss pink.’

Australians should have a great view of the full moon for the entirety of Tuesday night, however the most impressive vantage times were at sunrise and sunset when it was closest to the horizon.

Although the spectacle will be at its brightest on Tuesday, the rare moon put on an early show on Monday afternoon as it basked on the skyline just above roof tops in Sydney’s east.

Locals walking along Bondi Beach could be seen stopping to gaze up at the marvel as it carved a goldish orb on the horizon. 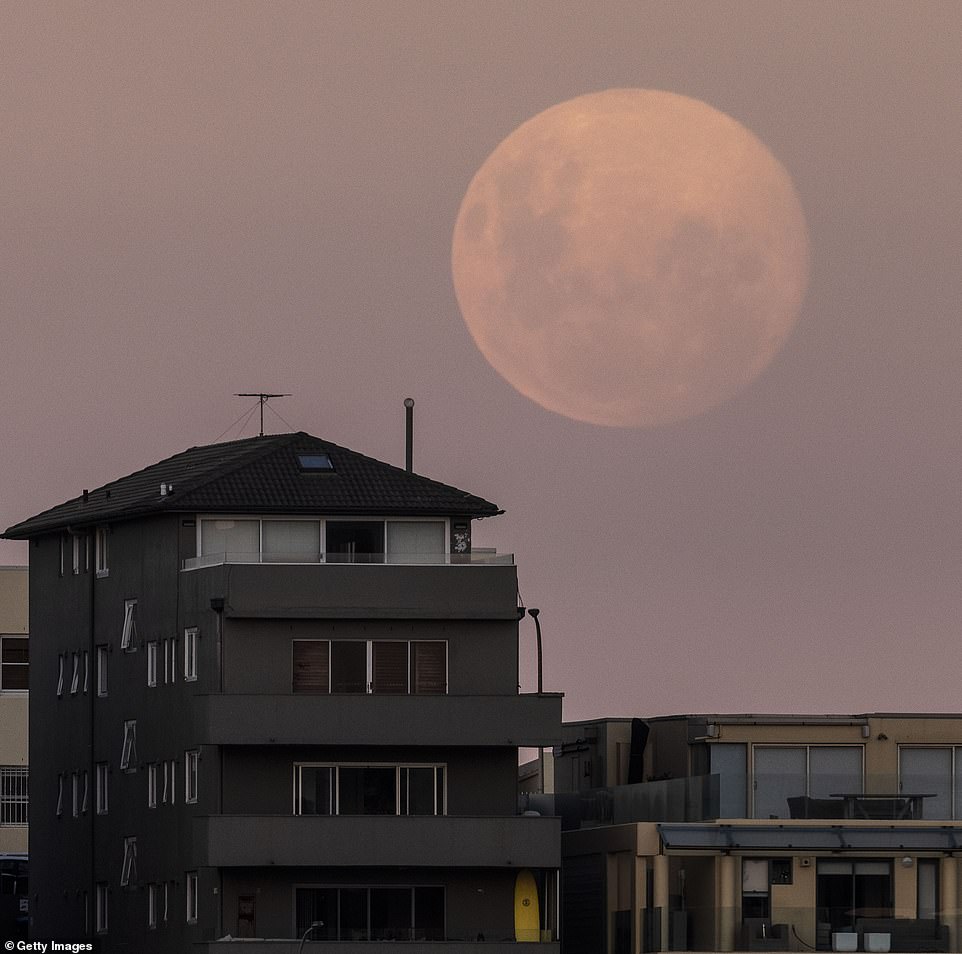 Although the peak viewing time was on Tuesday, the vibrant astrological phenomon lit up the sky over Bondi on Monday night 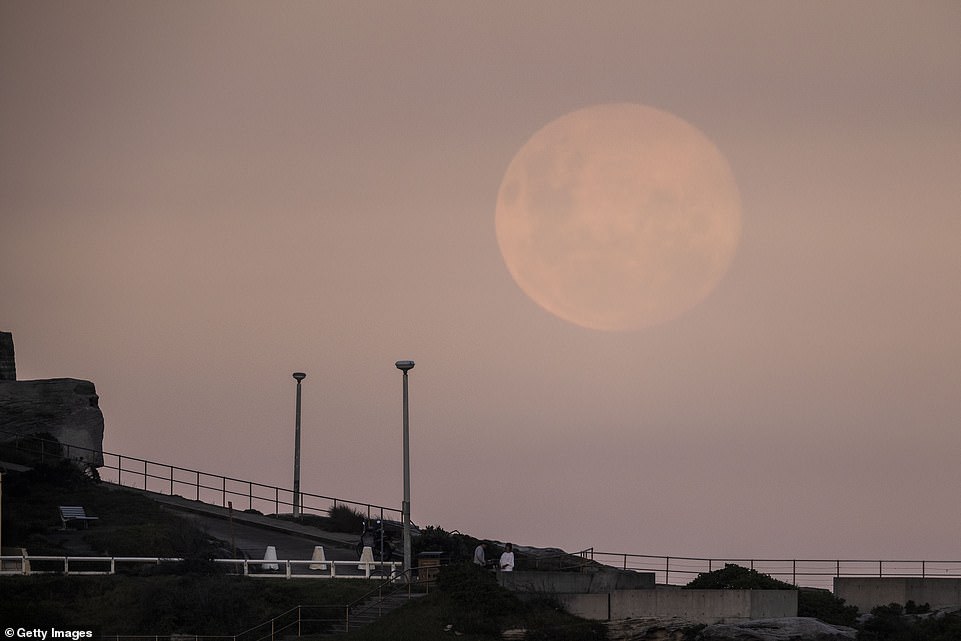 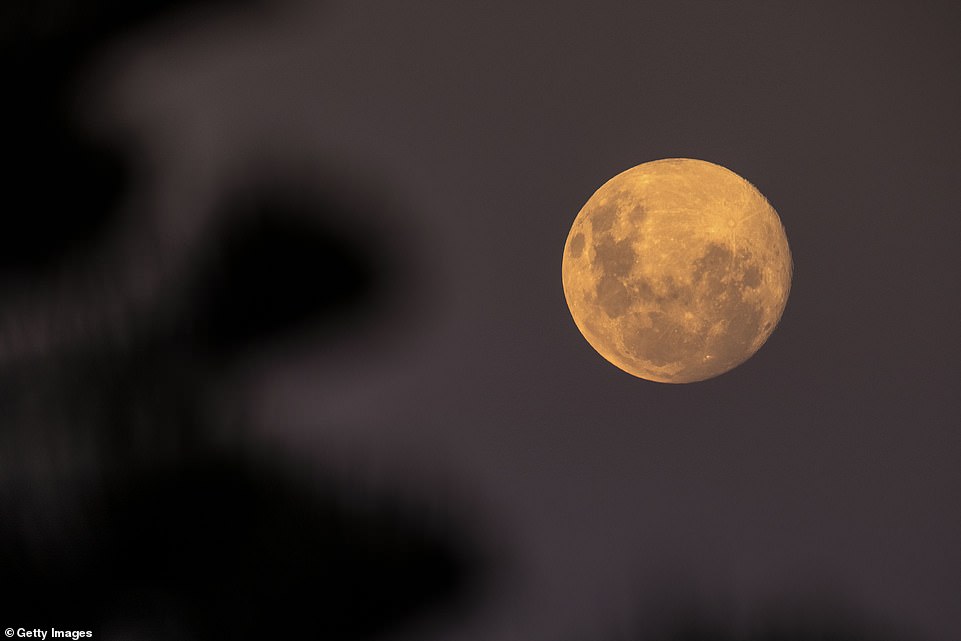 Despite its name, the lunar surface does not glow pink, instead emitting a stunning goldish colour

While supermoons typically only occur once every 12 to 14 months, this year we will be graced with two – just weeks apart.

The second supermoon is on Wednesday, May 26, which is also the date of a total lunar eclipse, so the moon will turn into a super blood moon.

The eclipse begins at 6.47pm AEST and will peak at 9.18pm. This blood moon will be a reddish colour due to earth’s shadow covering the moon.

Native Americans have a name for the full moon of every month in the calendar, including Wolf Moon for January, Snow Moon for February and Worm Moon for March – then Flower Moon in May.Strawberry Moon is for June, Buck Moon is for July and Sturgeon Moon is for August.