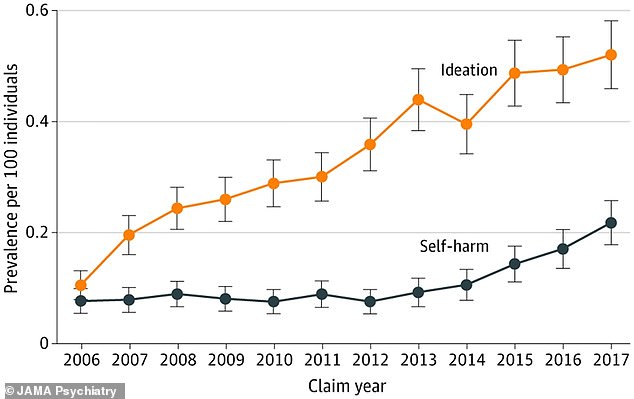 Depressive symptoms and self-inflicted pain are on the rise among pregnant women and new mothers, a new study suggests.

Researchers found that the rates of suicidal thoughts among this group of women tripled between 2006 and 2017 and the rates of self-harm doubled.

What’s more, the greatest increases in these rates tended to be among women who were young, black and from low-income families.

The team, from Michigan Medicine, is calling on policy makers to pass laws that ensure pregnant and postpartum women have access to universal suicidality screening and any subsequent treatment that is needed.

A new study from Michigan Medicine found rates of suicidality among pregnant women and new mothers tripled from 0.2% per 100 women to 0.6% per 100 women (yellow line) and intentional self-harm diagnoses doubled from 0.1% to 0.2% over the decade (black line)

Researchers found that the greatest increases in these rates were women who were young, black or from low-income families (file image)

‘Suicide deaths are a leading cause of maternal mortality in the US,’ said lead author Dr Lindsay Admon, an obstetrician-gynecologist at Michigan Medicine Von Voigtlander Women’s Hospital.

‘It’s a public health crisis that has silently grown worse.’

For the study, published in JAMA Psychiatry, the team looked at data from the Maternal Behavioral Health Policy Evaluation (MAPLE) study from 2006 to 2017.

Researchers analyzed suicidality trends among women between ages 15 and 44 in the year before and after they gave birth.

Meanwhile, diagnoses of intentional self-harm doubled from 0.1 percent to 0.2 percent over the decade.

Results also showed disparities among which women were affected the most.

Women between ages 15 and 18 also saw a spike with suicidiality diagnoses rising from 1.6 percent to 9.5 percent.

Among mothers with household incomes of 400 percent or less of the federal poverty level, diagnoses of suicidality increased from 0.2 percent in 2006 to 0.8 percent in 2017.

‘We need to improve screening for mental health wellness during and after pregnancy,’ Admon said.

‘We know that untreated mental health conditions put both moms and their children at higher risk for adverse health outcomes, including preterm birth and maternal suicide.’

‘We need to seek health system and policy avenues to better identify suicidal symptoms in childbearing women,’ she said.

‘It’s critical that we intervene as early as possible and provide necessary therapies to reduce the risk of the most tragic outcome.’