Real against Celta Vigo .. Camavinga scores the fourth in his first appearance with the Royal “Video” 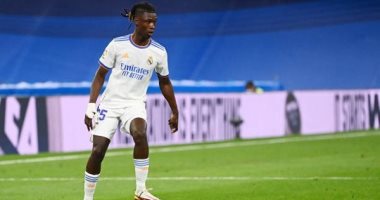 French youngster Eduardo Camavinga added Real Madrid’s fourth goal against its guest Celta Vigo, during the meeting that brings the two teams together, at the “Santiago Bernabeu” stadium, where the royal team returns to play after an absence of 560 days, due to comprehensive renovations, in the fourth round of matches. Spanish La Liga competition.

Camavinga’s goal came in the 72nd minute of the match, after he followed up on a rebound from Celta Vigo goalkeeper and easily put it in the empty net, so the result became Real Madrid’s 4-2 lead.

The young Frenchman came as a substitute for Belgian star Eden Hazard in the 66th minute of the match.