A woman who was dubbed a real life Eliza Doolittle after growing up in a council flat before being taken in by a wealthy family during World War II has died aged 94.

Patricia ‘Pat’ Wood had humble beginnings in south London but was  evacuated to a wealthy house in Fittleworth near Chichester during the war.

While there, she taught herself how to speak with a posh accent – just like Eliza Doolittle in My Fair Lady.

And later she married two millionaires –  Leonard Berney, the director of Rembrandt Clothing and Ken Wood, of the Kenwood manufacturing brand, and rubbed shoulders with royalty.

Her son John, 62, has now paid tribute to her following her death. 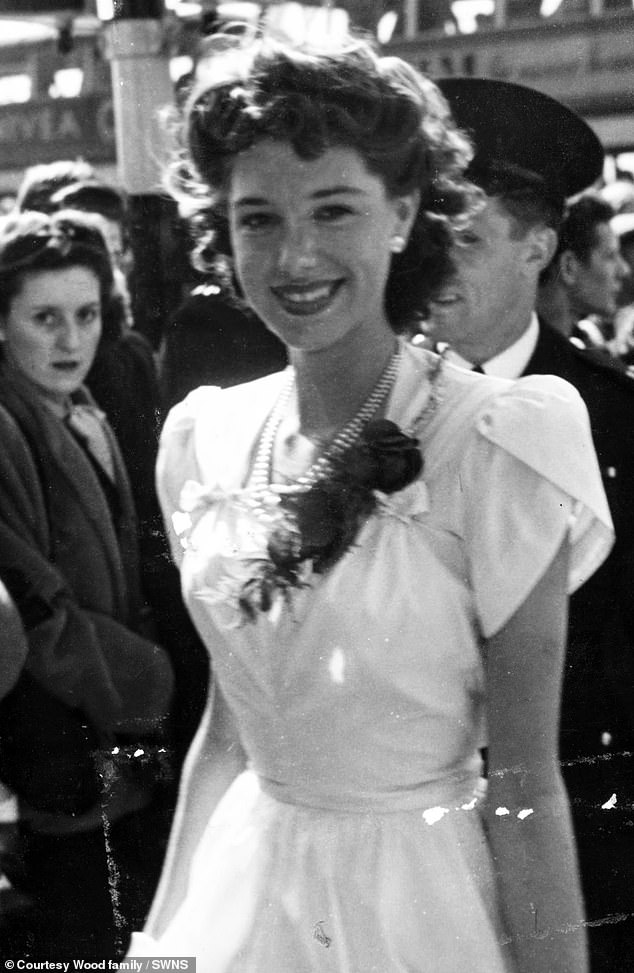 A woman who was dubbed a real life Eliza Doolittle after growing up in a council flat before being taken in by a wealthy family during World War Two has died aged 94. Patricia ‘Pat’ Wood had humble beginnings in south London but was evacuated to a wealthy house in Fittleworth near Chichester during the war. She is pictured as a teenager 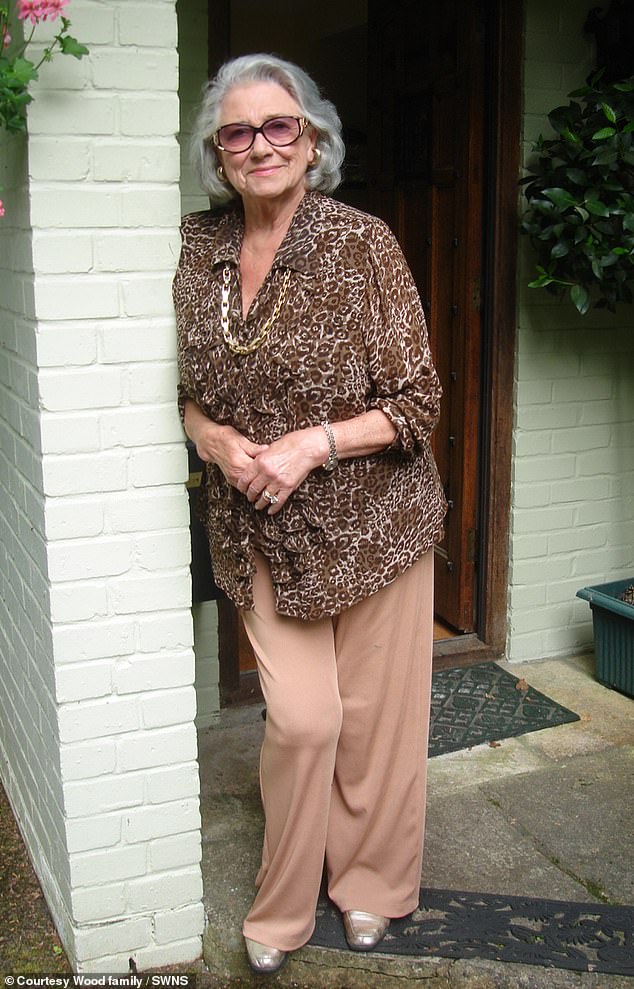 ‘She was a city kid with a cockney accent and next minute she was riding horses with a well-to-do family. She taught herself to speak posh because she knew she wouldn’t get anywhere with her ‘Cor blimey’,’ he explained.

‘She used to put eyeliner on the back of her legs to pretend like she was wearing stockings because you couldn’t buy them in the war, and she was asked out by everybody – all the Lords and successful businessmen.

‘On several occasions, she was taken to dinner by a Lord or a Sir or whoever and then was dropped home in their chauffeur-driven car.

‘But mum would ask to be taken to Eaton Square or similar, not wishing to reveal that she really lived in Camberwell, and then walk all the way home.’

Born to parents Lily and Herbert Purser on 7 December 1927, Patricia grew up in humble beginnings in a council flat in Camberwell.

When the war broke out, her dad, who had fought in the First World War as a sniper, was one of the first to sign up to the Home Guard.

Patricia was evacuated to a  Fittleworth near  where the young Londoner experienced a dramatic class change.

John explained Patricia knew her background could hold her back both socially and professionally, but she found work as a switchboard operator at the British newspaper publishing company Amalgamated Press on Fleet Street, 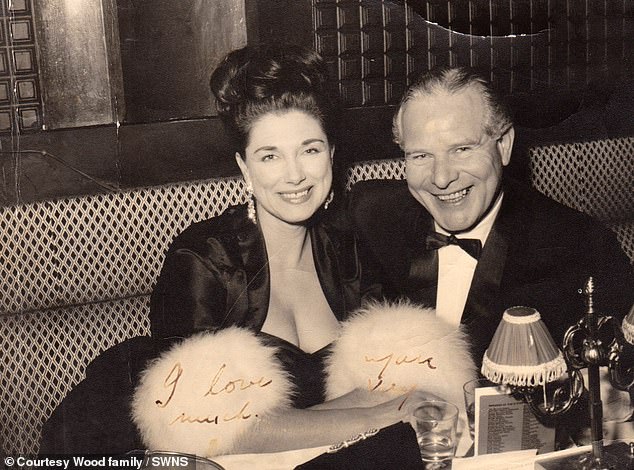 Oh so glam! Patricia and Ken Wood, the founder of Kenwood manufacturing at a party. Born to parents Lily and Herbert Purser on 7 December 1927, Patricia grew up in humble beginnings in a council flat in Camberwell. 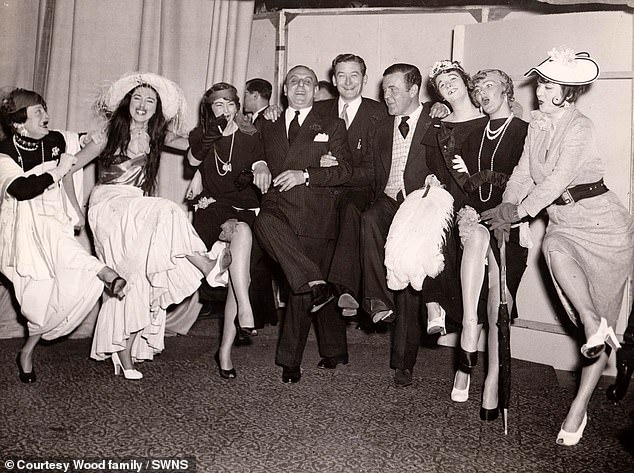 When the war broke out, her dad, who had fought in the First World War as a sniper, was one of the first to sign up to the Home Guard. Pat with Norman Hartnell surrounded by other models including Leslie Berker, June Oaks, Lady Cobham.

With the idea of becoming a model still stuck in her mind, Patricia decided to enter into a beauty contest which was hosted by the Merchant Navy in 1946. She won.

The success of the competition catapulted her into the world of fashion and before she knew it, Patricia had become a model for leading British fashion designer, Sir Norman Hartnell.

Best known for being the royal dressmaker for Queen Elizabeth,  The Queen Mother and Queen Elizabeth II, Sir Norman Hartnell had a troop of young ladies, which now included Patricia.

According to John, his mum made lots of friends while modelling in London, but her closest friend was a woman called Gina Egan, who later married Jagaddipendra Narayan or ‘Bhaiya’, the Maharaja of Cooch Behar in 1956.

Gina, who later became an Indian princess, remained lifelong friends with Patricia and was later asked to be John’s Godmother when he was christened in 1960.

Patricia also found love and one day while swimming at Royal Automobile Club, she bobbed her head above the water to see Leonard Berney – a successful businessman who worked for a clothing manufacturing company called Berketex in Plymouth. 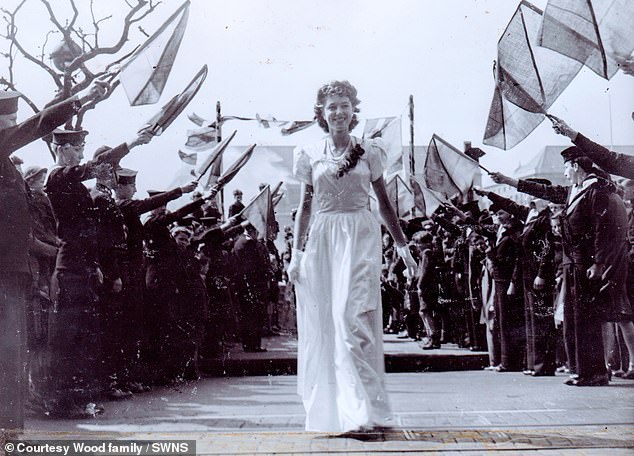 The idea of becoming a model still stuck in her mind, Patricia decided to enter into a beauty contest which was hosted by the Merchant Navy in 1946. She won. Pictured in the contest 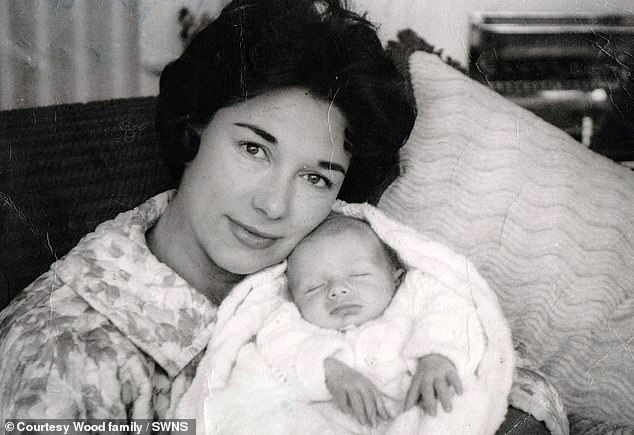 Patricia holding her son John, at 10 days old. John has now paid tribute to his mother who has passed away

The two immediately hit it off and after dating, Patricia followed Leonard to Devon where they got married in Plymouth Register Office in 1951.

John added: ‘They built a luxury apartment on the edge of the factory which was where mum and dad lived, and where they had my two older brothers.’

Although they lived hours away from London, the pair made regular trips back and forth for work and social events.

John explained that on one occasion his parents attended a party hosted by Gina and Bhaiya where they met a man called Ken Wood.

He said: ‘After that party, they didn’t meet again until she was pregnant with me.’

John’s family stayed in Plymouth for about a decade until his father decided to set up his own business in London.

He said: ‘I was six weeks old when we moved in the New Year of 1960 to a big house in New Malden in Surrey. 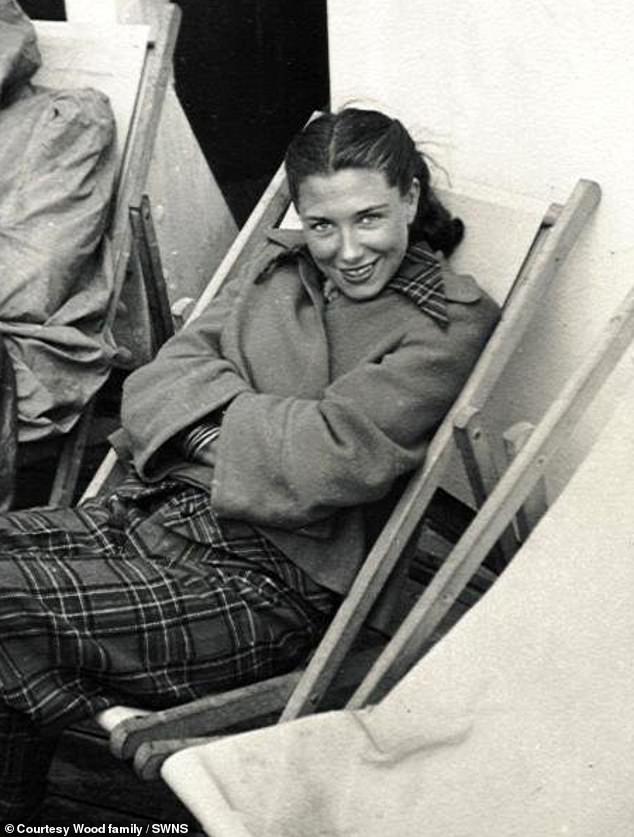 Patricia Wood, who had grown up in south London, put on a posh accent to fit in with London’s riches. She is pictured as a teen 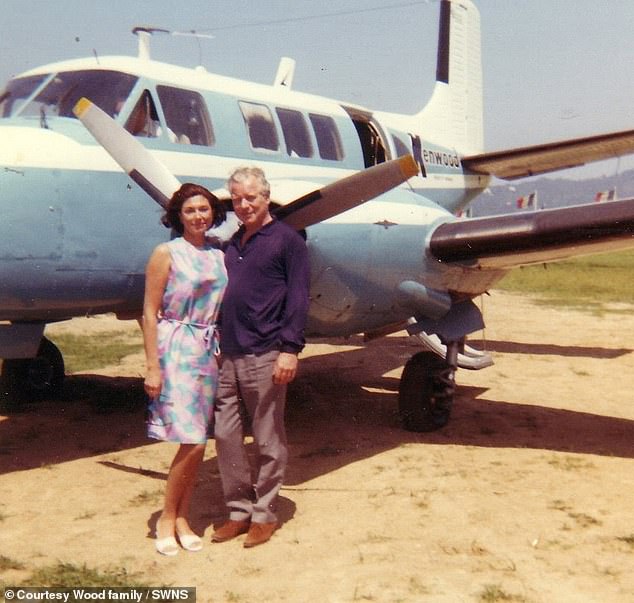 Patricia and her second husband, Ken – the founder of Kenwood manufacturing – standing outside the Kenwood plane.

Leonard’s work brought the family back to the fashion capital, but while he shot to success as the director of Rembrandt clothing, behind closed doors, their marriage was falling apart.

John explained that his father had lived two lives; one as a businessman and the other as a Jewish-born British Army officer, who led the clean-up of the infamous Bergen-Belsen concentration camp during World War Two.

Leonard, who was from an anti-aircraft regiment with the 8th Corps 21st Army that helped defend London during the Blitz, was one of the very first to witness the atrocities of the Holocaust and only started speaking about his war activities much later on in his life.

While not being very emotional, John described him as the ‘complete opposite’ of his mum and wasn’t sure whether the war made him like he was.

After the marriage fell apart Ken, the gentleman from the party, started to get close to Patricia and bought her a clothes-dryer as a present to help with the extra laundry loads.

Soon after, they became more than ‘just friends’ and a romance blossomed.

The Lewisham-born businessman was the household name and founder of Kenwood manufacturing.

Despite their subsequent divorce, Leonard and Patricia remained on good terms.

Speaking about that time, John said: ‘They were so different. Dad was tough and intelligent while mum, although she was a smart cookie, mum was such fun and loved to argue, so maybe it was their differences that caused it all. 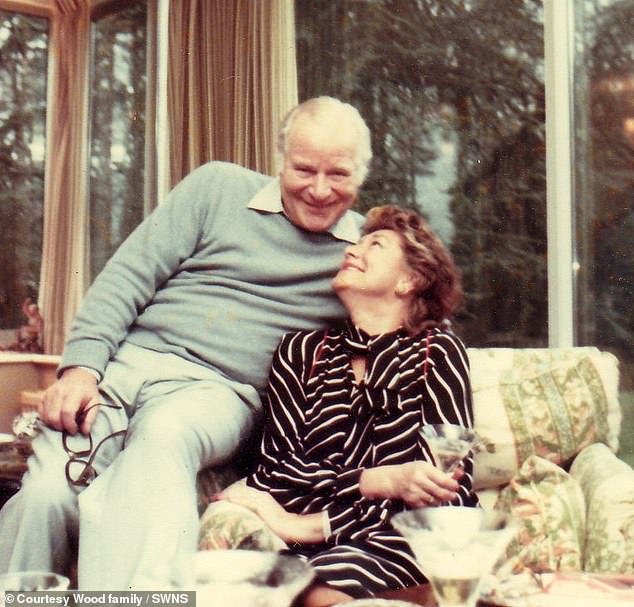 Ken and Patricia later in life. The Lewisham-born businessman was the household name and founder of Kenwood manufacturing 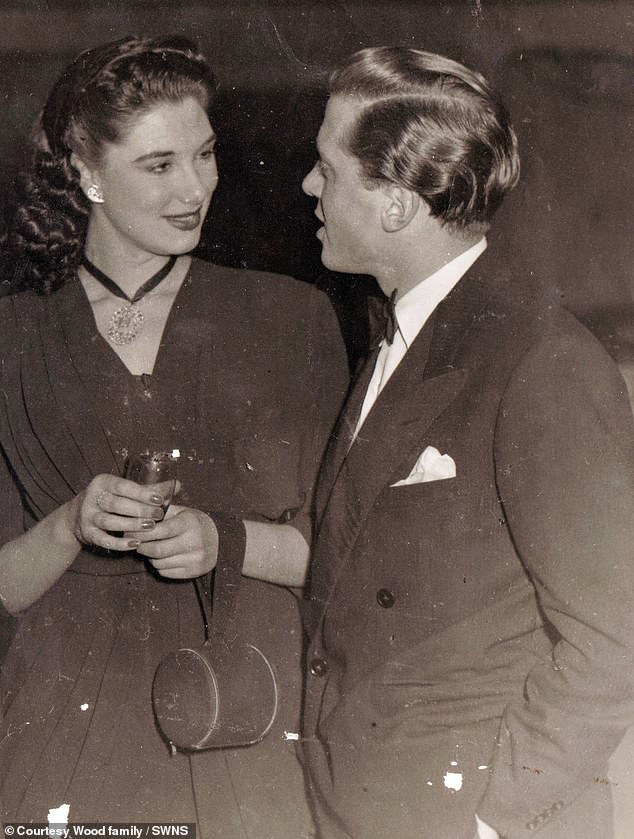 Pat Wood with Richard Attenborough at the premiere of Brighton Rock (1948) in Leicester Square.

‘When Ken entered our lives, he bought us a house round the corner and we spent years travelling with him on amazing holidays to Spain and the Bahamas on the Kenwood plane.

‘We moved down to West Wittering together and would often be delivered fresh mangoes from the Kenwood factories in India – I have just fantastic memories from that time.

‘Ken was absolutely besotted with mum and they were so happy together.’

After a happy and luxurious life together, Ken died in October 1997, as John remembered.

He said: ‘On Ken’s deathbed he made me promise to look after her.

‘Two days before he died, he asked for a pen and paper and he poured his heart out about how much he loved her. I fulfilled my promise and did everything I could to look after mum.

‘I moved in with her on two occasions after she had had a fall and then when she had a stroke in 2001 which made her wobbly but she was tough and didn’t want a stairlift until she really needed it.’

‘It became more difficult to look after her so there was no choice but to move her into a home.’

Patricia’s family carried on visiting her until the very end and as the family’s archivist, John now hopes that his mother’s story can live on forever.

He said: ‘My dearest mum – a real character, loved by all, always glamorous, and the kindest, warmest and most generous person you could ever wish to meet – passed away.

‘What a fantastic life she led and what a wonderful mother she was to me. I love her dearly and will always miss her – her warm heart, her smile, her kindness, her love, and most of all, her sense of fun.’

Nvidia’s $40B arm deal is dead; what does this mean to the future of the company?

Nvidia's $40B arm deal is dead; what does this mean to the future of the company?