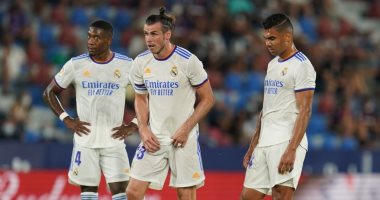 The Real Madrid team returns to play again at the “Santiago Bernabeu” stadium in the presence of its fans for the first time in a long time, after the completion of the development process inside the royal team’s castle, where it will host its rival Celta Vigo, in the confrontation scheduled to take place at nine in the evening, Sunday, in the competitions The fourth round of the Spanish League “La Liga”.

Real Madrid will play tonight’s match under the leadership of Italian coach Carlo Ancelotti, and he is third in the Spanish league table with 7 points, while Celta Vigo is in the eighteenth place with one point.

Real Madrid has been with Celta Vigo in 127 years throughout history, as follows:

The number of matches that ended in a tie: 21 matches.

– The last 5 matches between Real Madrid and Celta Vigo, Real Madrid won 4 of them and the two teams tied in one match.

– Real Madrid has scored at least two goals in the last 10 games it played against Celta Vigo in all competitions.

Real Madrid plays 6 consecutive matches in 17 days in the Spanish League and the European Champions League, where the royal team plays 4 La Liga matches and two matches at the start of its Champions League campaign in the new season 2021-2022.

Not getting vaccinated against covid-19 is like driving drunk, says expert

Anas, a caricaturist and drawing coach, at the age of eight: “I want to be in Picasso’s fame.”

Anas, a caricaturist and drawing coach, at the age of eight: “I want to be in Picasso’s fame.”