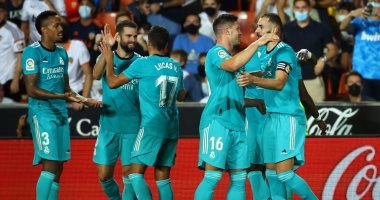 Real Madrid will host its counterpart Real Mallorca at ten in the evening, Wednesday, at the “Santiago Bernabeu”, as part of the sixth round of the Spanish League championship for the current season 2021/22.

The two teams have faced each other in 58 matches before, Real Madrid won 37 matches, while Real Mallorca won 10 matches, and 11 matches were tied between them.

Dani Carvajal will miss 4 Real Madrid matches initially, and it may extend to 6, and it will be against Real Mallorca, Villarreal, Sherif Tiraspol and Espanyol, with the possibility of his absence against Athletic Bilbao and Shakhtar..

Real Madrid will try hard to prepare the player to face Barcelona on October 24 at the Camp Nou stadium.

Carvajal was injured during the match against Valencia, and he missed Real Madrid last season in 36 official matches.

Real Madrid is expected to play the match as follows:

On the other hand, Real Mallorca is in eighth place in the table with 8 points, after a goalless draw against Villarreal in the previous round..

Mallorca is looking to correct the path and get back on the right path, so it will try in various ways to stop the bleeding of points and continue to compete strongly for the advanced positions..