Real Madrid’s team bus has a window SMASHED on the drive to Anfield, with Liverpool fans ‘throwing missiles’ during hostile welcome ahead of Champions League quarter-final second leg

Real Madrid‘s hostile reception from Liverpool fans led to a smashed window in the hours building up to the Champions League quarter-final second leg.

Liverpool fans lined the streets close to Anfield to give an intimidating welcome to the Spanish champions as flares were set off with the Madrid bus driving through a red haze.

But the damage was more than just obscuring the vision of the driver as the outer screen of the window was damaged with reports from Spanish media of missiles causing the breakage.

In the end Real Madrid’s players refused to let it affect them as a 0-0 draw was enough to progress to the last-four with a 3-1 aggregate win. 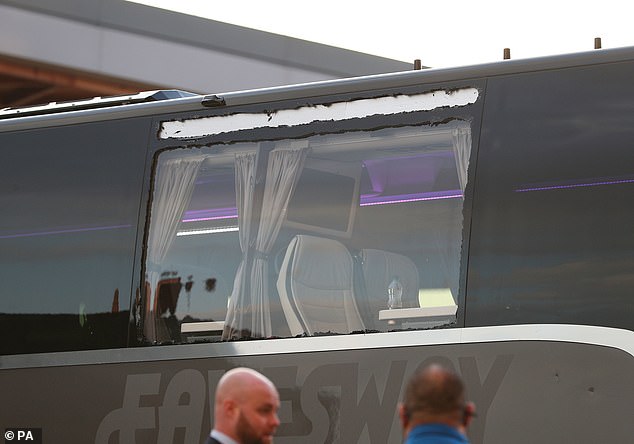 In a statement following the incident, Liverpool said: ‘We condemn unequivocally the actions that led to Real Madrid’s team bus being damaged during its arrival to Anfield this evening.

‘It is totally unacceptable and shameful behaviour of a few individuals. We sincerely apologise to our visitors for any distress caused.

‘We will work together with Merseyside Police to establish the facts and identify those responsible.’

Real Madrid arrived on Merseyside with a 3-1 lead from the first leg but they will be wary of Liverpool’s record in famous turnarounds in Europe at Anfield. 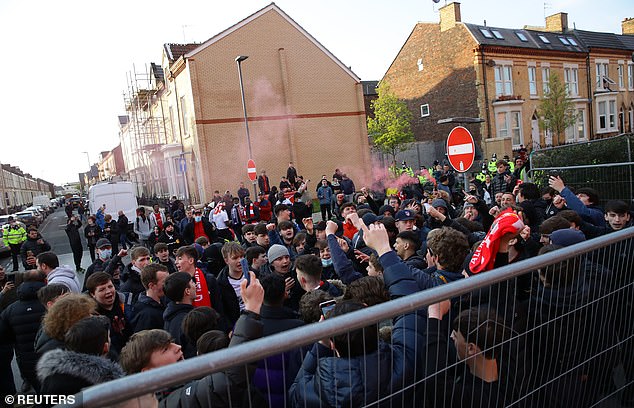 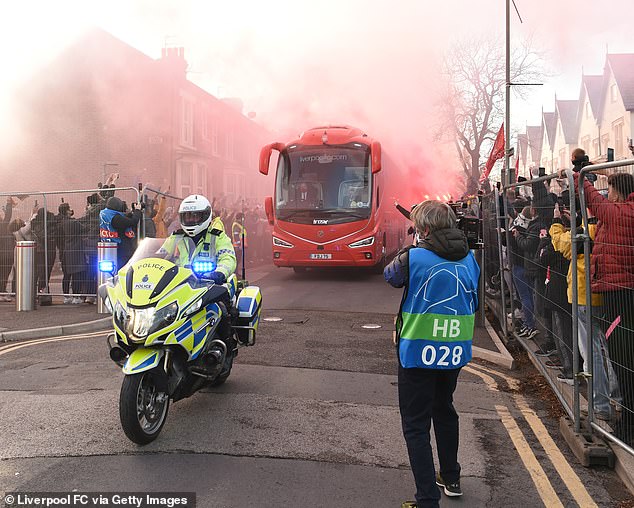 Much of Liverpool’s success in those games has been influenced by the noisy home support but this match remains without fans and behind closed doors.

That did not stop some gathering in the streets close to Anfield before the game and reports, originally from Cadena COPE, stated that missiles were thrown from home fans at the Real Madrid bus, leading to the window damage.

Public gatherings of more than six people are currently prohibited due to coronavirus restrictions but many supporters came out on Wednesday to catch a glimpse of the two teams.

This would not be the first time Liverpool fans have targeted a visiting team’s bus for a European tie.

Back in 2018 at this same stage, Man City’s coach was struck by bottles and cans as it drove into Anfield.

Back in 2018, Manchester City’s bus was struck by objects thrown from Liverpool supporters

So bad was the damage to the coach carrying Pep Guardiola and Co, City needed an entirely new bus to make the journey home with the original said to be unusable.

‘It is so strange because you go with your own bus through the crowd and it feels fantastic, it is passion,’ the German said after the City bus was damaged three years ago.

‘Then you come into the stadium and the first thing I heard is they smashed the bus of Man City and it kills everything in that moment for us.

‘You cannot be happy about that, you don’t feel “it” any more. Because of a few idiots it will maybe never happen again. It changed everything.’