A recovering addict who is suffering from liver damage and will likely need a liver transplant has warned against the dangers of alcohol abuse, revealing her liver is so enlarged that people ask if she’s pregnant.

Trina Beil, 49, from Oregon, has been candid about her struggles with alcohol and drug abuse on TikTok, sharing that she used to consume a fifth of vodka a day and initially ignored her doctor’s insistence that she stop drinking.

While she is now sober, she still struggles with a number of health issues as a result of her substance abuse. She told BuzzFeed News that she has been diagnosed with hepatomegaly, abnormal enlargement of the liver.

In late May, Trina shared a video of her stomach to show what ‘liver damage of an alcoholic’ looks like, stressing that ‘this is no joke.’ 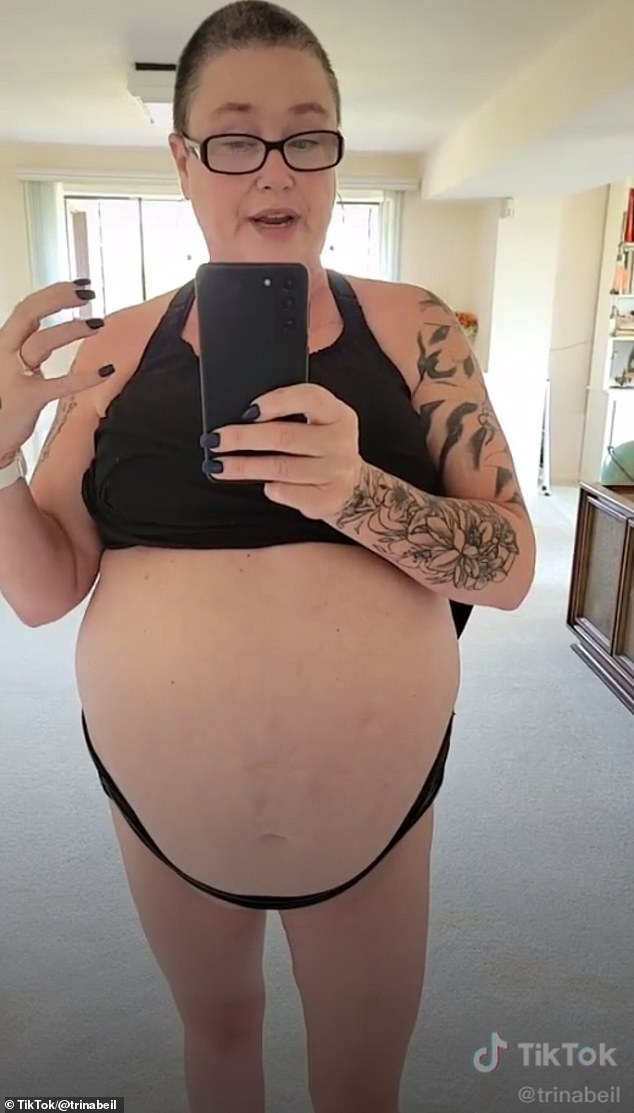 Warning: Trina Beil, 49, from Oregon, shared a TikTok video of her enlarged stomach in May to show what ‘liver damage of an alcoholic’ looks like, stressing that ‘this is no joke’ 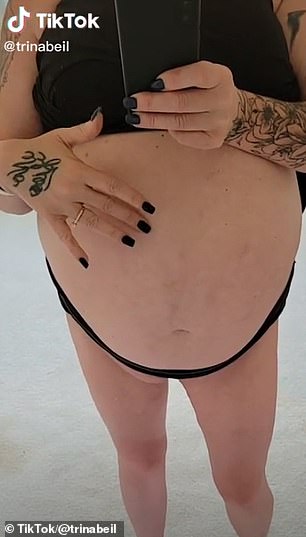 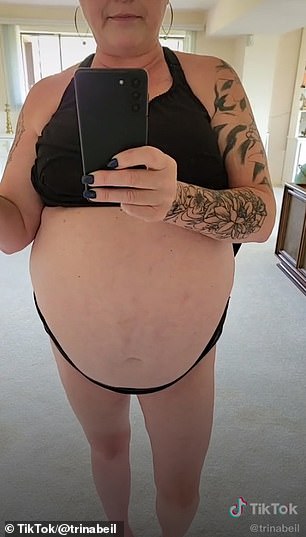 Struggle: While she is now sober, her past substance abuse has left her with a number of health issues, including hepatomegaly, abnormal enlargement of the liver

‘Hi, guys. This is not food in my stomach. I’m Trina, an alcoholic addict. I’ve been clean off meth almost two years, and I’m four and a half months sober,’ she said at the start of the viral clip.

‘I did not listen to my specialist when he told me to stop drinking or I’d have huge liver problems, and — here we are. I got a report yesterday that is not good.’

Trina explained that her liver is so large that it’s ‘squishing’ her stomach,’ saying: ‘When I try to eat or drink anything, it’s super uncomfortable.’

‘If you’re questioning whether you should stop drinking, or you think that s**t like this can never happen to you… it can,’ she added.

‘I’m just balls-out here showing you because this is the reality of addiction and alcoholism, and I hope, if you’re questioning to stop or not, that you definitely will.’

Trina’s eye-opening video has been viewed 13.2 million times and has received more than 41,000 comments. Many people thanked her for sharing her story to help others. 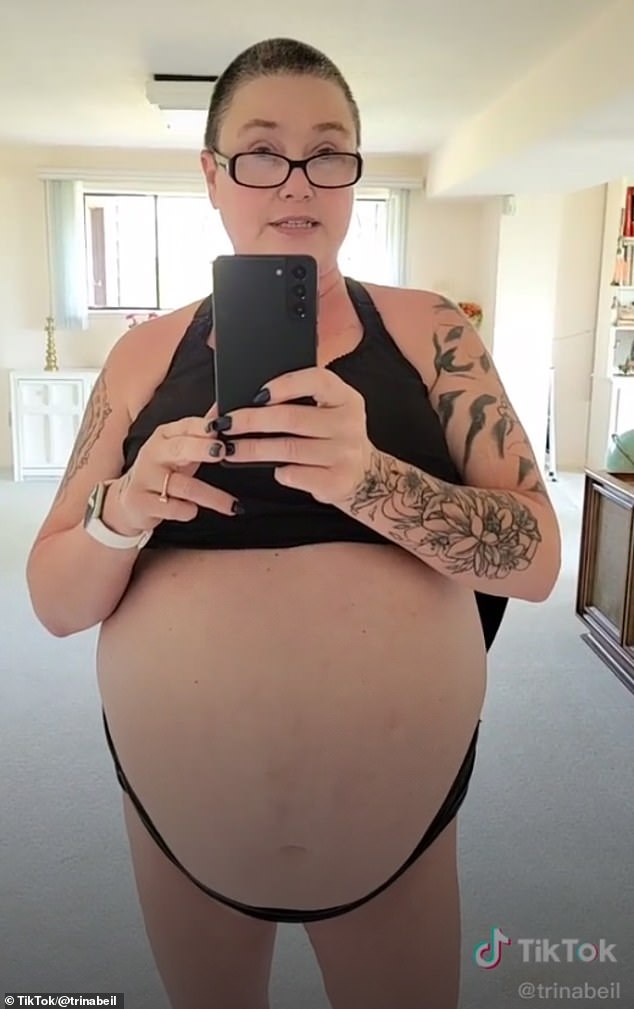 Out  of control: Trina started abusing narcotics at age 24, but her drinking increased when she gave up meth nearly two years ago

Going viral: The eye-opening clip has been viewed 13.2 million times, and thousands of people thanked her for sharing her story

‘Wow thank you for the courage to share this. I will absolutely pray for you to heal and get better,’ one person wrote.

‘It takes a lot to share this with the cruel internet but honestly so thankful for you spreading this type of message,’ another added.

‘Thank you for the raw truth,’ someone else shared. ‘I have no doubt you will help endless people because of this video.’

Trina shared a number of follow-up clips about her battle with addiction and her road to her recovery, as well as updates on her health.

In her recent interview with BuzzFeed News, she explained that started abusing narcotics when she was 24 as a way to dull the pain of her childhood trauma. 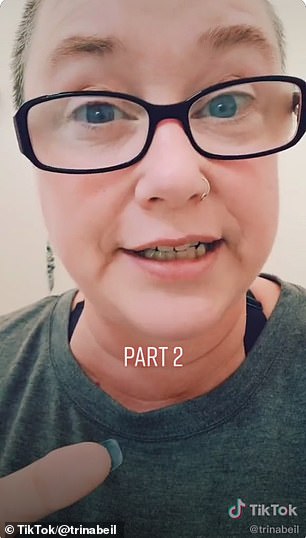 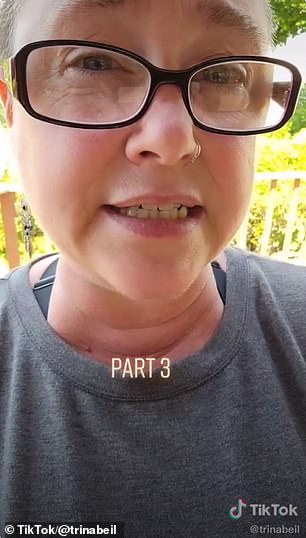 Looking back: Trina has been candid about her struggles with alcohol and drug abuse on TikTok, sharing that she used to drink a fifth of vodka a day 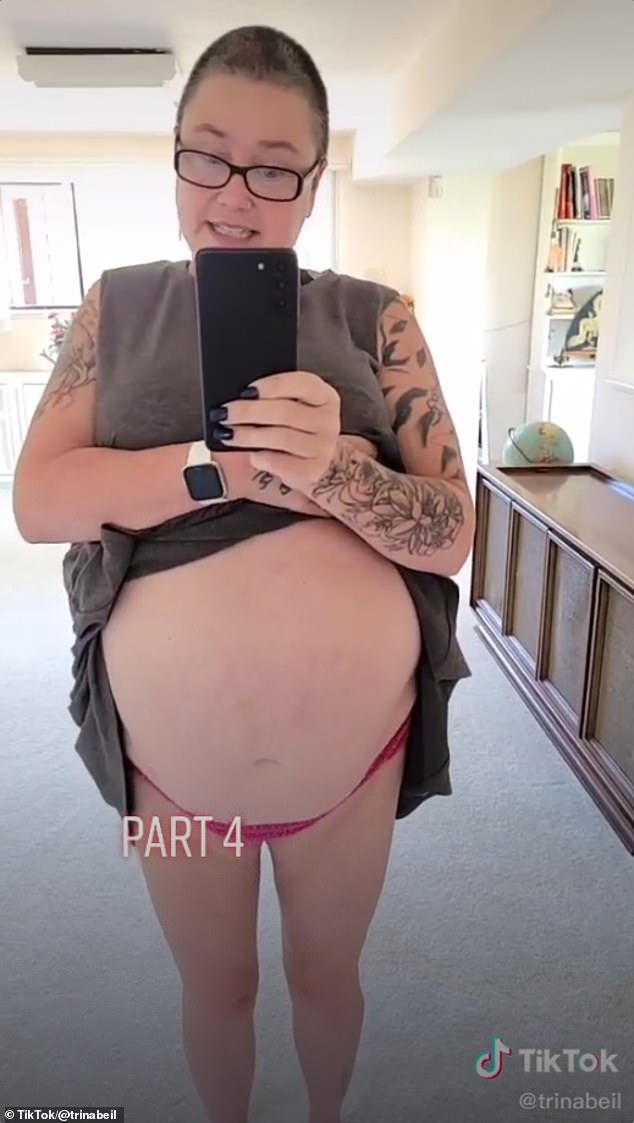 Health concerns: In June, she gave a health update, saying an MRI confirmed that she has liver damage and would likely need a liver transplant 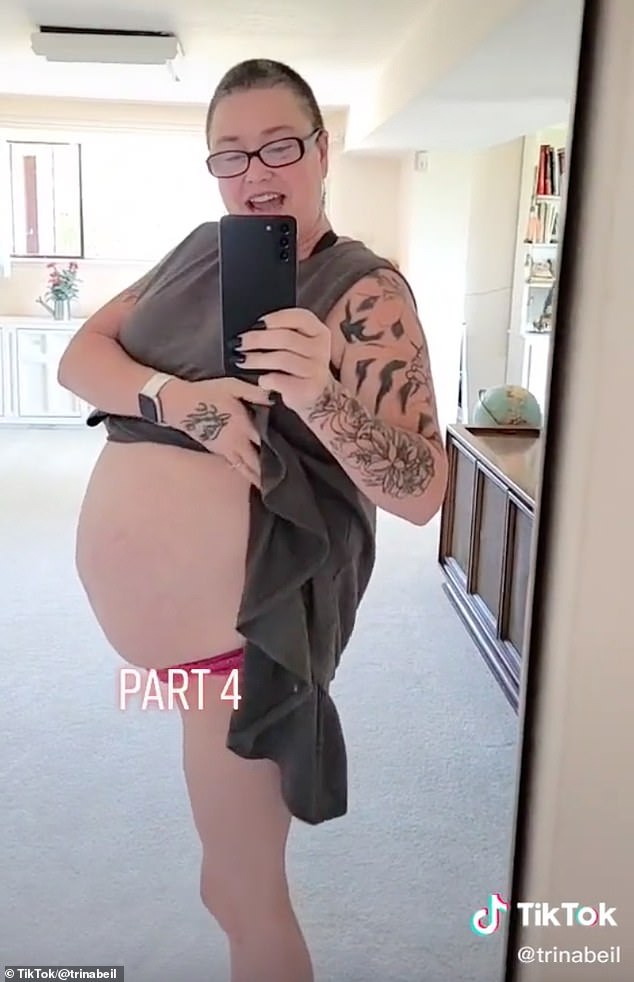 Mistaken: Trina said that her stomach is so distended because of her enlarged liver that people often ask her if she is pregnant

‘The reason I kept taking them was because it numbed all the issues I felt had been suffocating me since I was a young child,’ she said.

Over the years, she became addicted to meth, alcohol, and cigarettes. When she quit meth a few years ago, her drinking increased.

‘I was a beer girl, but if I wanted to get drunk, you know, I would straight shot something,’ she recalled in one video. ‘The last couple years I was drinking a fifth a day of vodka, and I would just straight shot it.’

‘I’d send my husband to the liquor store at 10 a.m. I’d drink it, be done with it about 6 p.m. and then I would send him to the store to get two tall-boy Trulys.’

In her final months of drinking, Trina would throw up every time she took a shot.

‘I knew I was out of control, and I knew I was spending thousands of dollars, and I was also treating my husband so unfairly,’ she said. ‘He is the best thing that has ever happened in my life, and I had to change my attitude around and pull up my big girl panties.’ 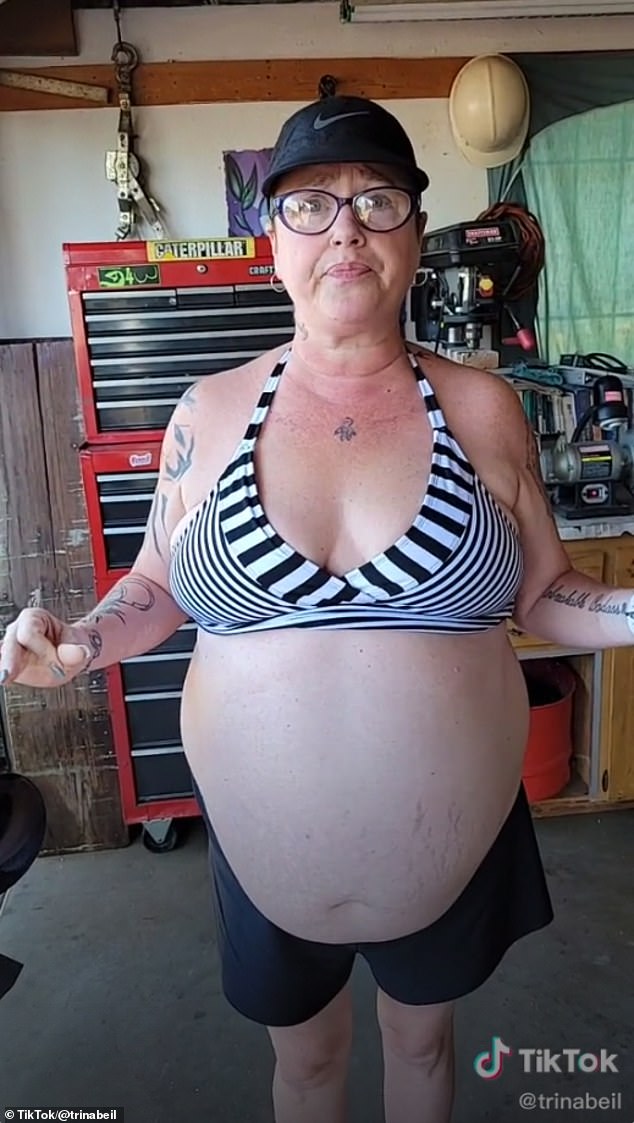 Hard to handle: Trina said her liver is ‘squishing’ her stomach,’ and it’s ‘super uncomfortable’ when she eats or drinks anything 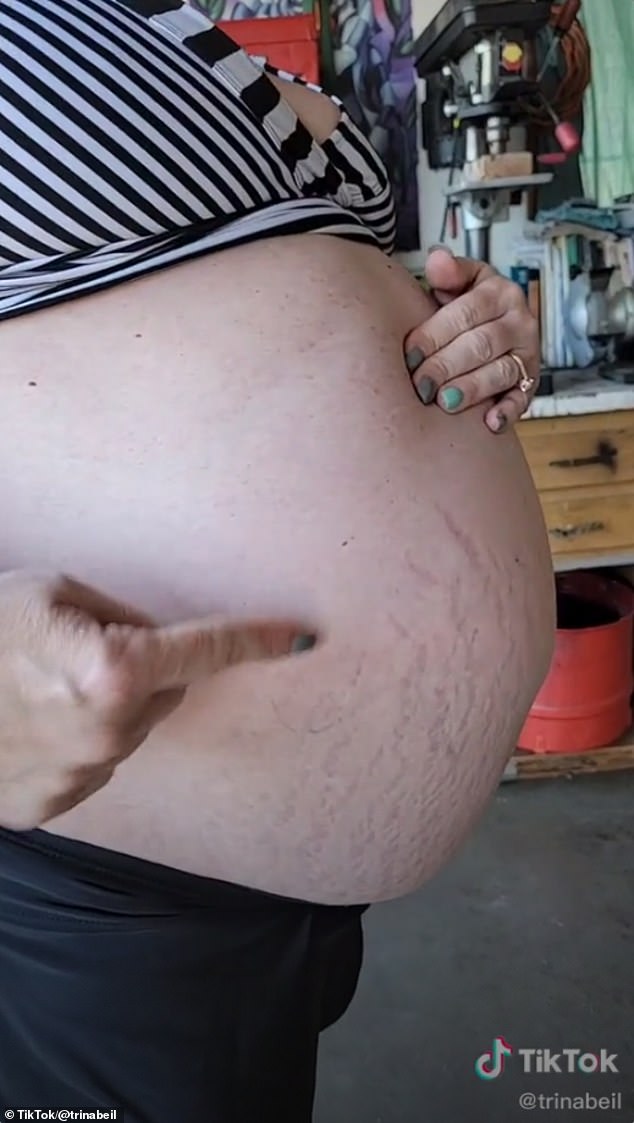 Warning: ‘I put myself in liver damage due to too many drugs and drinking and not listening,’ she said. ‘I never thought it could happen to me. I thought I was invincible. Now I’m here’

In another clip, she shared some of the physical symptoms of her alcohol abuse that coincided with her kidney cancer diagnosis three years ago.

Trina said she suffered from ‘severe panic attacks,’ swollen ankles and legs, bloody stools, and bloody noses, adding that her ‘stomach felt like it had been through a grinder.’

‘My stomach is not soft. It doesn’t jiggle. It’s hard,’ she explained in one video. ‘I’m not pregnant. I have no acidities, no fluid in my stomach — which a lot of people are shocked about that.’

In June, she gave a health update, saying an MRI confirmed that she has liver damage and would likely need a liver transplant.

‘I’m tired, but you know I did this to myself. I just want to get this awareness out,’ she said. ‘Please, if you are even thinking of picking up a drink or questioning if you should stop, please stop.

‘I’m not saying this happens to everyone, but this is drug and alcohol abuse. I put myself in liver damage due to too many drugs and drinking and not listening. I never thought it could happen to me. I thought I was invincible. Now I’m here.’

Hepatomegaly is a medical term used to describe abnormal enlargement of the liver.

An enlarged liver is not a disease but rather a sign of an underlying problem, such as liver disease, cancer, or heart and blood vessel problems. Treatment involves identifying and controlling the cause of the condition.

Other symptoms of an enlarged liver from liver disease include abdominal pain, fatigue, nausea, vomiting, and yellowing of the skin and whites of the eyes (jaundice).

Covid: A town’s intoxicating will to press on through the pandemic

Watch Texas trooper dashcam that shows illegal immigrants pouring out of a human smuggler's car after...