Riders of the New York City subway and bus system are at low risk of being infected with the novel coronavirus, researchers claim.

The report, commissioned by the American Public Transportation Association (APTA), looked at mass transit ridership across the country over the last three months.

It claims buses and trains are safe because they are well-ventilated and people wear masks and don’t talk during their relatively short rides.

The authors state that COVID-19 infection rates are linked to how widespread the virus is in a community rather than how many people ride its public transportation.

However, there have been several studies and papers which argue transportation systems in big cities such as New York City helped spread the virus, particularly during the early days of the pandemic. 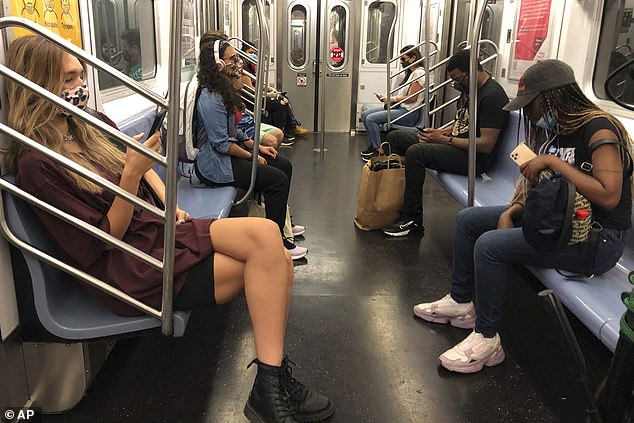 A new report claims that New York City subway and bus commuters have a low risk of catching coronavirus during their rides. Pictured: People in face masks ride the subway in Manhattan during the coronavirus pandemic, August 27 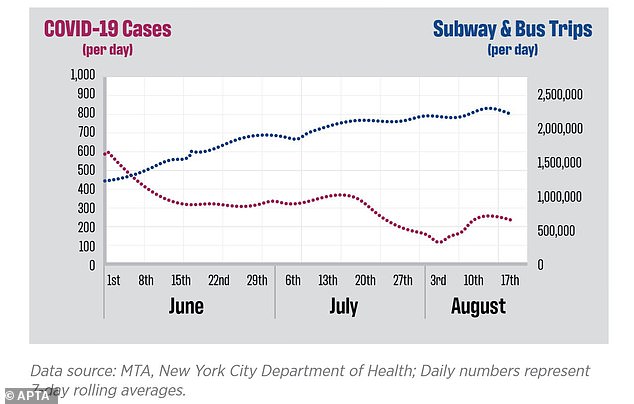 Between June and August, MTA rides rose from 1.25 million per day to 2.25 million while cases dropped from 650 daily to 250, the report states (above)

Sam Schwartz, whose consulting firm prepared the report, said risks are low on trains and buses because people spend short amounts of time on them.

He argued airplanes, on which people spend long period of time, pose much higher risks to travelers.

Schwartz said people face much greater risks in their workplaces than during their commute to work.

‘Everything has a risk to it, but your risks are probably greater at your place of employment or if you are going out to a restaurant,’ he told The Wall Street Journal.

In the report, researchers looked at COVID-19 cases in New York City and ridership on the city’s transit system between June 1 and August 18, 2020.

Meanwhile, the average number of coronavirus cases dropped from about 600 daily day to around 250 daily.

‘[There is] no direct correlation has been found between use of urban public transit and transmission of COVID-19,’ the report states.

The APTA did not immediately reply to DailyMail.com’s request for comment.

Ridership in New York has severely fallen, according to data from the Metropolitan Transit Authority (MTA), which runs public transportation for the state.

The authors state that COVID-19 infection rates are linked to how widespread the virus is in a community rather than how many people ride its public transportation. 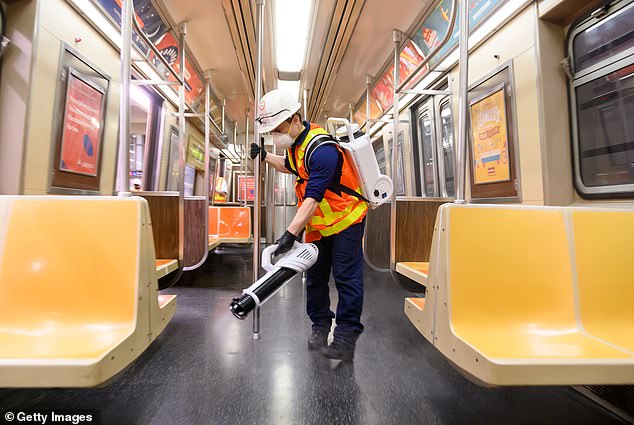 Millions of dollars have been spent cleaning and disinfecting buses, trains and high-touch point areas such as kiosks. Pictured: An MTA cleaning contractor sprays Shockwave RTU disinfectant inside a New York City subway car, May 23

Officials have taken several steps to ensure the public that it is safe to ride again.

Millions of dollars have been spent cleaning and disinfecting trains, bused and high-touch point surfaces such as kiosks and turnstiles, and a $50 fine has been implemented for those who don’t wear a mask during their ride.

‘This report adds to the growing body of evidence that mass transit is safe with the proper public health safeguards in place,’ Abbey Collins, a spokeswoman for the MTA, said in a statement to DailyMail.com.

However, Dr Jeffrey Harris, a professor in the Department of Economics at the Massachusetts Institute of Technology disagrees.

In April, Harris published a paper arguing that New York City’s subway system was a one of the biggest – if the not the biggest promulgator – for the spread of COVID-19 during the early days of the pandemic.

He told The Journal that the MTA did not take such stringent cleaning steps in March and April 2020.

Harris added that there was high ridership on subways in the first two weeks of March at the same time there was a ‘rapid, exponential surge in infections.’

‘There is strong evidence that New York City’s unique, massive subway system served as a vehicle to propagate the virus rapidly throughout the city’s five boroughs within days of arriving from abroad,’ he told the newspaper. 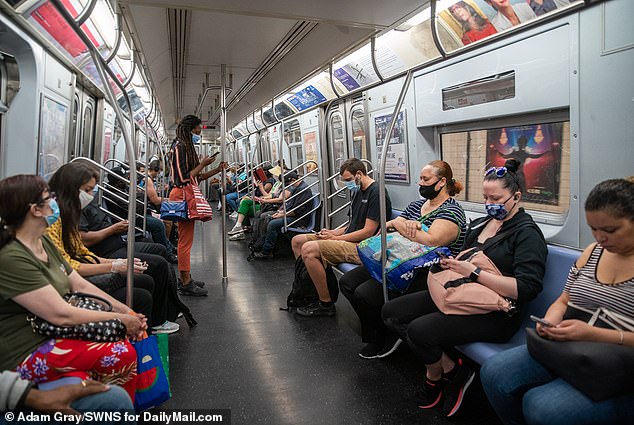 Academics argue such cleaning measures were not in place during the early days of the pandemic, which is what helped spread the virus. Pictured: People ride the L train subway during rush hour in New York City, June 8 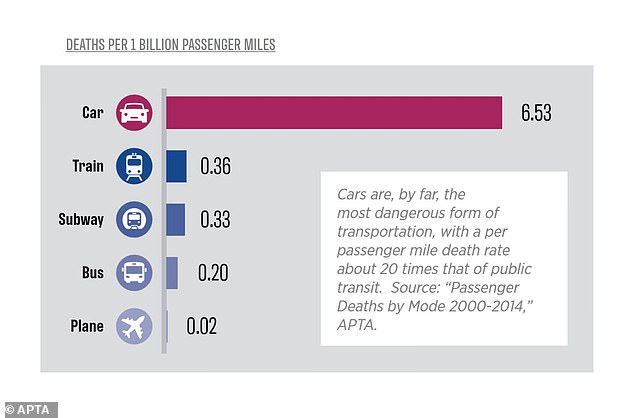 The MTA ridership data also showed that traffic at bridges and tunnels is just 20 percent lower than 2019 averages – almost back to pre-pandemic levels.

This implies that as commuters have shunned subways, trains and buses, they have switched to using cars and taxi cabs.

The report warns of ‘long-term health consequences’ if the public begins riding in cars rather than on transit systems.

‘On a per mile basis, passengers are about 20 times more likely to experience a fatal crash in a car than when using public transit,’ the authors wrote.

‘In addition, more time spent in a car can lead to inactivity diseases, including obesity, diabetes, and high blood pressure. On an environmental basis, cars pollute far more than public transit and increase a traveler’s carbon footprint.’

Read more : The Safety.com Guide to Public Transportation During COVID-19

Reasons to Let Your Child Learn and Practice Karate