Reports: Besiktas is close to ending the Pjanic loan deal 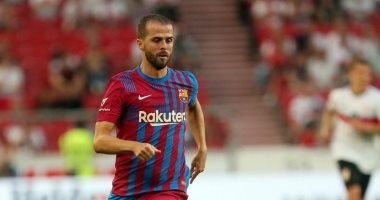 Today, Thursday, press reports revealed that the Turkish club Besiktas is close to obtaining the services of the Bosnian Miralem Pjanic, the Spanish midfielder of Barcelona, ​​​​on loan for one season, during the current summer transfer season.

The Catalan newspaper, “Mundo Deportivo”, reported that Besiktas made an offer to Barcelona to borrow Pjanic during the current Mercato and before the registration door was closed in the Turkish League, and that the Bosnian player was being pressured by the Catalan club’s management to leave.

The newspaper pointed out that Besiktas and Barcelona are in advanced talks to finalize the deal, and that the agreement is now close between the two clubs, and that negotiations are underway regarding personal terms and the salary that the player will receive.

The newspaper pointed out that Besiktas has until midnight to register Pjanic in the Champions League list.

Pjanic participated with Barcelona 1295 minutes in 30 matches, and did not score or assist any goals, and he is far from the accounts of Dutch coach Ronald Koeman throughout the events of last season.

Turkish reports had indicated that Besiktas Club had submitted an official offer to its English counterpart Arsenal to obtain the services of the Egyptian international, Mohamed El-Nini, before the transfer market was closed..

The transfer market in Turkey ends on September 8, and there is an opportunity for Besiktas to sign Mohamed Elneny at the request of the coach, Sergin Yalcin..

Besiktas’ strong interest in the return of his former player comes in conjunction with the desire of his rival and rival Galatasaray, the professional in his Egyptian international ranks, Mustafa Mohamed to include Elneny..

According to the newspaper, Besiktas club submitted an official offer to Arsenal to sign the player due to the competition between him and Galatasaray..

The two clubs are seeking to resolve the Mohamed Elneny deal before tomorrow morning, Friday, September 3, and close the European registration date from “UEFA” in the Champions League and European League..