Homeowners on the Gold Coast fear their houses will be taken and their properties devalued by the Queensland government as part of the plan to extend the city’s light rail network by widening the highway.

Between 200 and 300 people received the notices, which the Department of Transport and Main Roads claims ‘provide certainty about property use in this area’.

Daily Mail Australia spoke with a number of residents who received the letter, which included an overhead plan showing how much of their property may be needed if the Stage 4 expansion of the rail eventually runs along Gold Coast Highway through Palm Beach and Tugun.

‘Some people have been told that 15 to 40 square metres of their property might be needed but in my case, they would need 75 sq m of my front yard,’ said Tugun homeowner Rosie Welk. 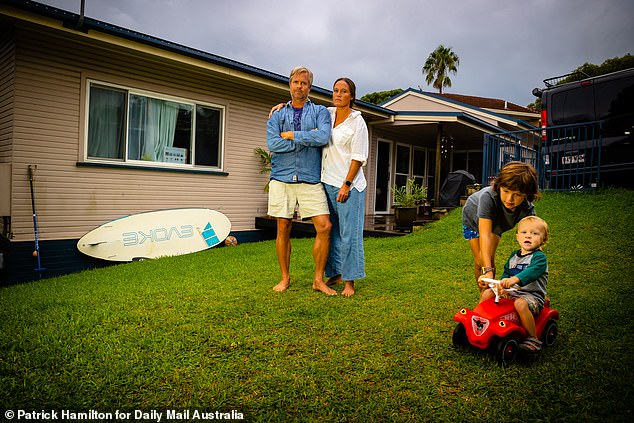 Tugun couple Matt Plummer and Rose Welk in their front yard with children, Finley and August 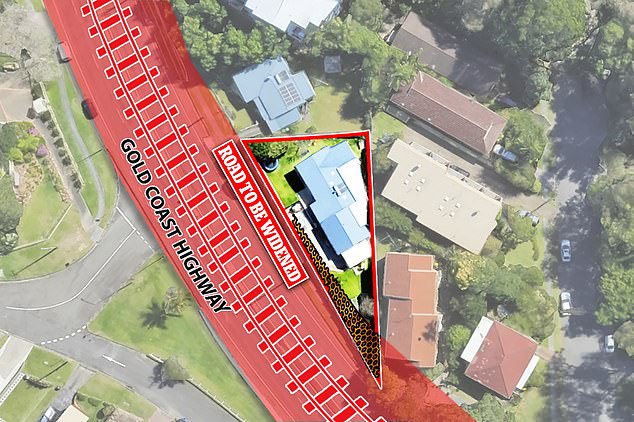 ‘The Gold Coast Highway would be right at my front door if it goes ahead. Plus vehicle access to the highway would be reduced to one lane and I already struggle to get in and out of my property with two lanes.’

‘It would make my front yard unusable. The real problem is that with the gentrification of the Gold Coast, if we wanted to move we’d never be able to afford anywhere else.’

Ms Welk said a neighbour, who didn’t wish to speak to the media, had lived in her property for 52 years and will also have part of her front yard removed under the plan. 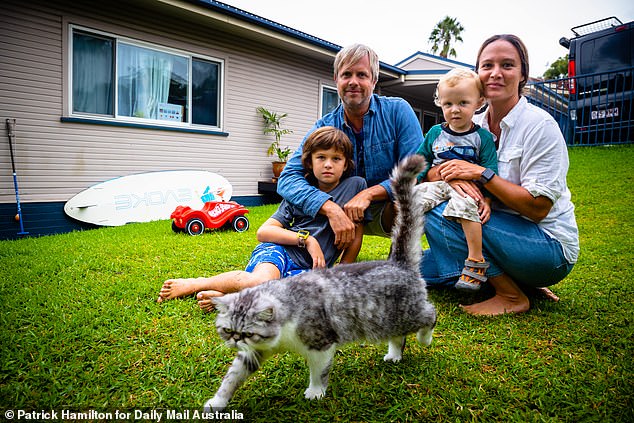 ‘She’s a little old lady with an agoraphobic daughter who doesn’t go out and has everything delivered, so they are really concerned.’

Ms Welk revealed that she had been invited to a meeting with the DTMR to discuss her concerns.

Peter Behns has lived and worked in Palm Beach along the proposed route for 32 years and runs a denture clinic from his house.

The possible route would remove 60 per cent of the carport and adjacent car park in front of his clinic, which is currently Mr Behns’ only parking option for clients. 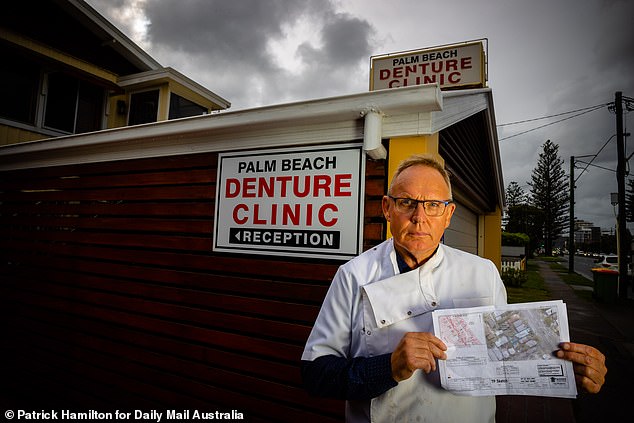 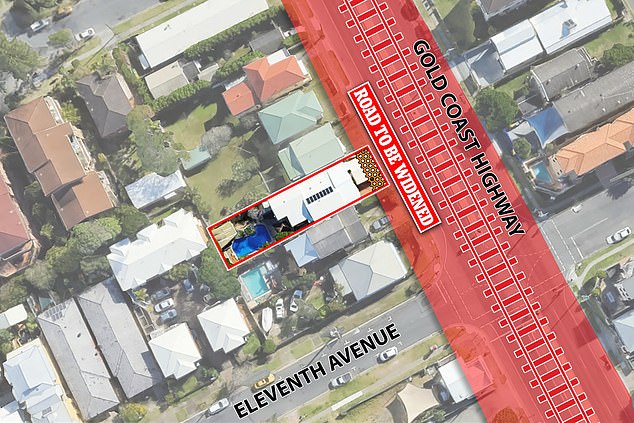 ‘If this goes head I’ll have no business and will struggle to sell my house,’ Mr Behns said. ‘I’ve worked for myself for nearly 40 years and this business is my superannuation.

Mr Behns’ practice caters for many elderly people, including Blue Care and Veterans’ Affairs patients, who he said rely on wheelchair access to his property.

‘They will have no where to park if I lose the front of my place.’

Mr Behns said a nearby friend of his who runs a medical centre would lose 120 sq m of his property under the proposal. 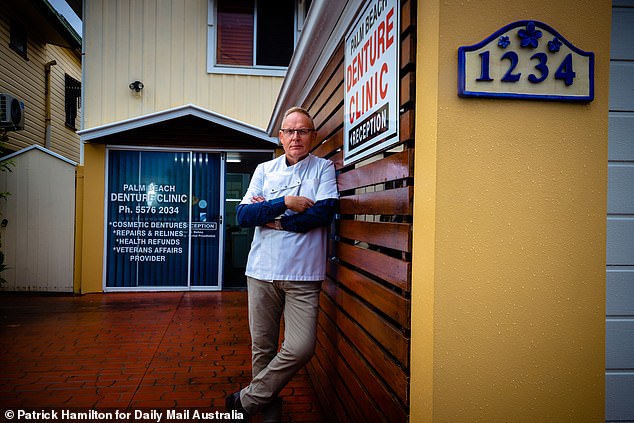 Mr Behns in the car spot he could lose, which he said is used by many of his elderly patients 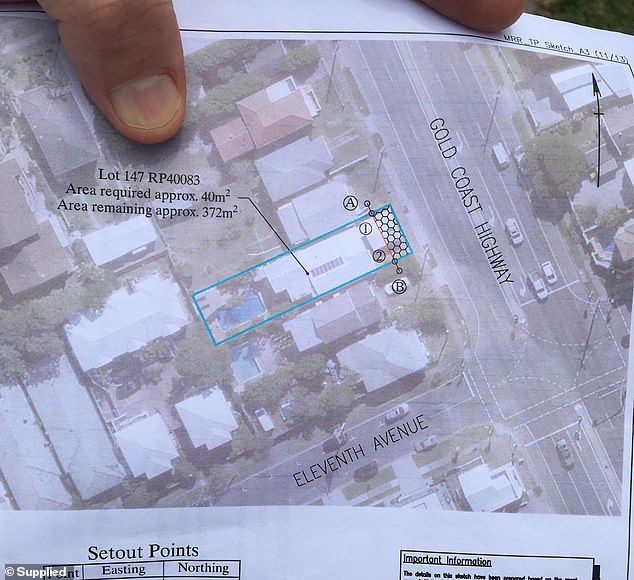 He said locals feel the light rail extension is unnecessary and is being fast-tracked to cater for tourists and the possible influx of international visitors if Brisbane wins the 2032 Olympic Games.

‘There are plenty of buses already going past here every day and most of them are empty, ‘ he said.

Mr Behns is currently seeking legal advice on his position.

In response to outrage from residents, the DTMR posted to Facebook branding claims that the letters were resumption notices as ‘scaremongering’.

‘The letters are to make sure our stakeholders who are directly affected by the Gold Coast Light Rail Stage 4 know what’s going on *before* we head out to consult with the broader community.’

While assuring those affected that the light rail extension remained at the consultation phase, Queensland Transport Minister Mark Bailey told media last week, ‘Sometimes it might only be a sliver of land that is required, other times it might be something larger.’

‘Everyone will have the opportunity to participate in the consultation process – to ask questions and give face-to-face feedback,’ said the DTMR. ‘Any future project decisions will be subject to a detailed business case.’ 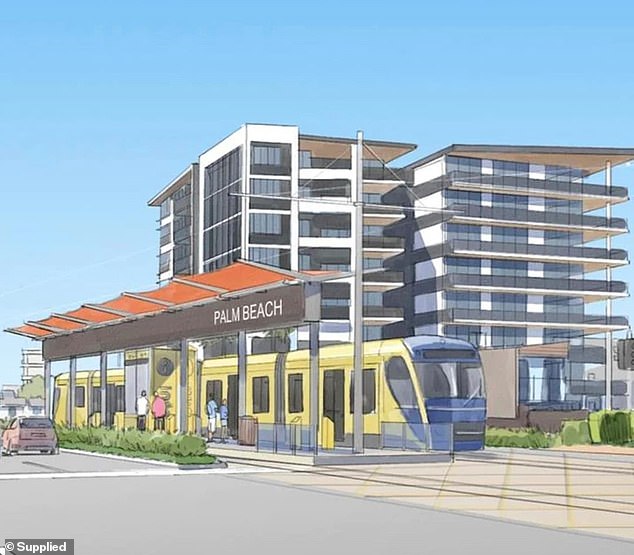 The Gold Coast light rail currently runs from Helensvale at the northern end of the city to Broadbeach in the heart of its shopping precinct.

Early work on construction of Stage 3, extending the line to Burleigh Heads at a cost of $709 million, has begun, with completion set for 2023.

The controversial 13km Stage 4 extension is planned to link Burleigh Heads to Coolangatta via the Gold Coast Airport. 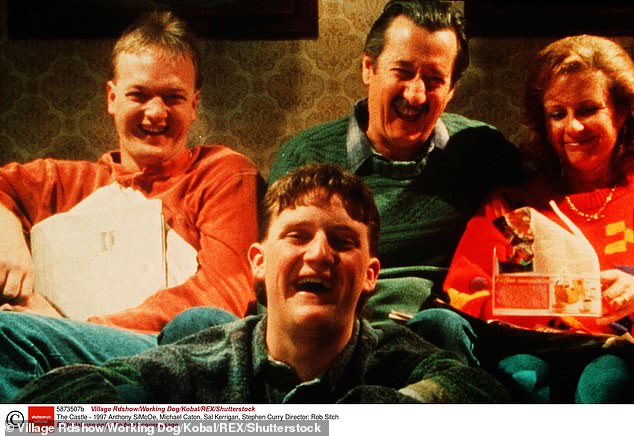