Resistance forces in Afghanistan have vowed to continue in their fight against the Taliban as they trained in the Panjshir Valley, a strategic fortress which sits north of Kabul.

Hundreds of fighters, who have never surrendered to the new rulers of Kabul, were seen wading through water with logs of wood over their back while others trained with their rifles as they prepared for the possible arrival of Taliban forces.

Elsewhere, others resistance members, dressed in military gear and carrying weapons, were spotted marching through the deserted streets of the mountain enclave.

The anti-Taliban uprising forces, known as the Northern Alliance, have vowed to fight on to the last and defend the 170,000 residents, most of them Tajiks, who live in the Panjshir valley, which lies in the Hindu Kush mountains north of the Afghan capital.

It comes as the Taliban claimed they were sending hundreds of fighters to the region and had the Panjshir surrounded. 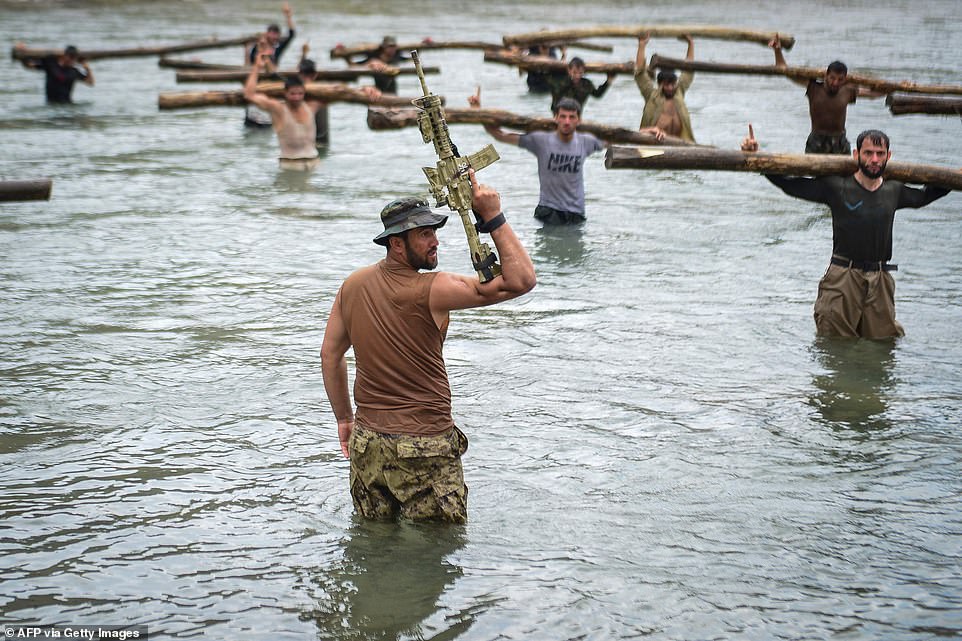 Resistance forces wade through the water with logs on their back as they train in the Panjshir Valley, a strategic fortress which sits north of Kabul, Afghanistan 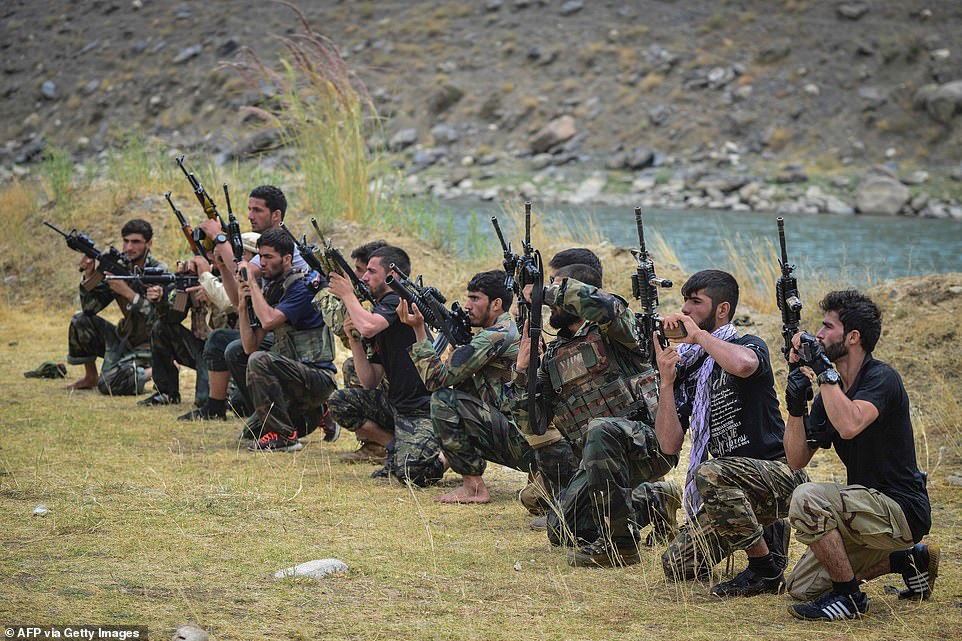 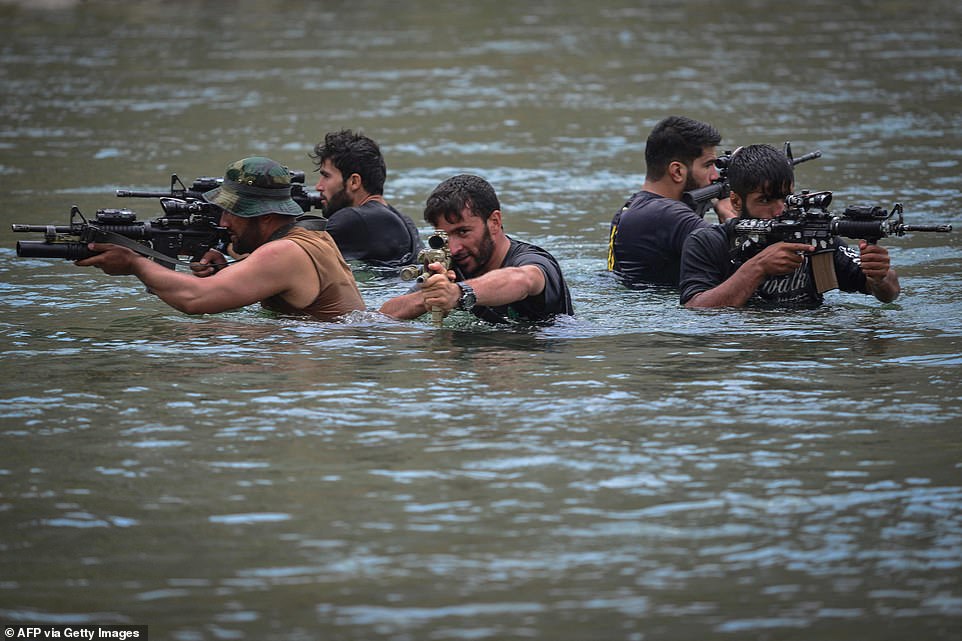 Afghanistan’s last bastion against the Taliban, is being led by Ahmad Massoud, 32, the British-educated son of a legendary freedom fighter in the Panjshir Valley

Mr Massoud, who was trained by the British military at Sandhurst, has vowed that no Taliban fighter will pass through the narrow gorge into the valley.

He was only 12 when his father, Ahmad Shah Massoud, who was as a formidable guerrilla fighter, known as the ‘Afghan Napoleon’ and ‘the Lion of the Panjshir’, was murdered by Osama bin Laden’s Al Qaeda assassins posing as Al Jazeera journalists – two days before 9/11.

Mr Massoud, who was forced to leave his homeland, then went to secondary school in Iran before training for a year at Sandhurst and then graduated with a degree in War Studies from King’s College London in 2015.

Now Mr Massoud has vowed to fight on to the last and defend the 170,000 residents of the Panjshir.

He is joined in the struggle by Afghan Army generals, their staffs and some soldiers, along with Amrullah Saleh, the vice president in the toppled government who calls himself Afghanistan’s acting president, and the ousted defence minister Gen Bismillah Mohammadi.

‘There are many other people from many other provinces who are seeking refuge in the Panjshir valley who are standing with us and who do not want to accept another identity for Afghanistan,’ Mr Massoud said.

‘We want to make the Taliban realise that the only way forward is through negotiation,’ he added. 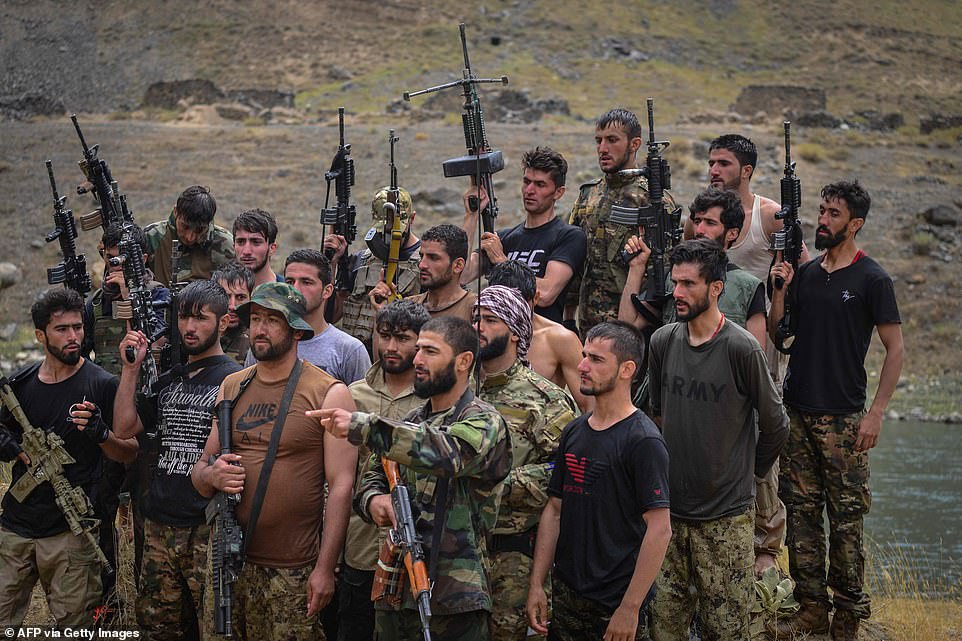 Afghan fighters train in the Panjshir Valley, a strategic fortress which sits north of Kabul, and vow to resist the Taliban from the mountain enclave 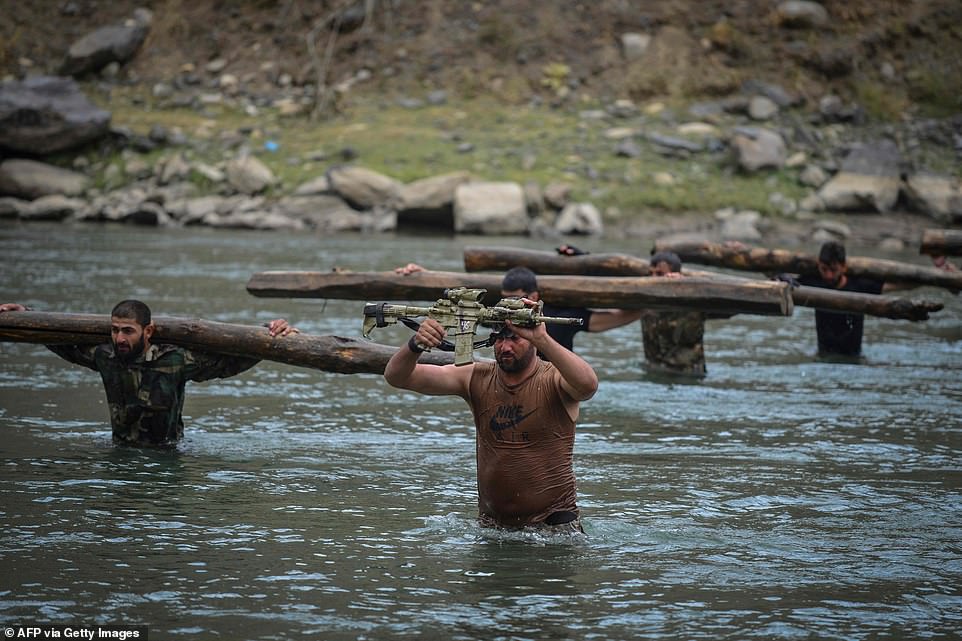 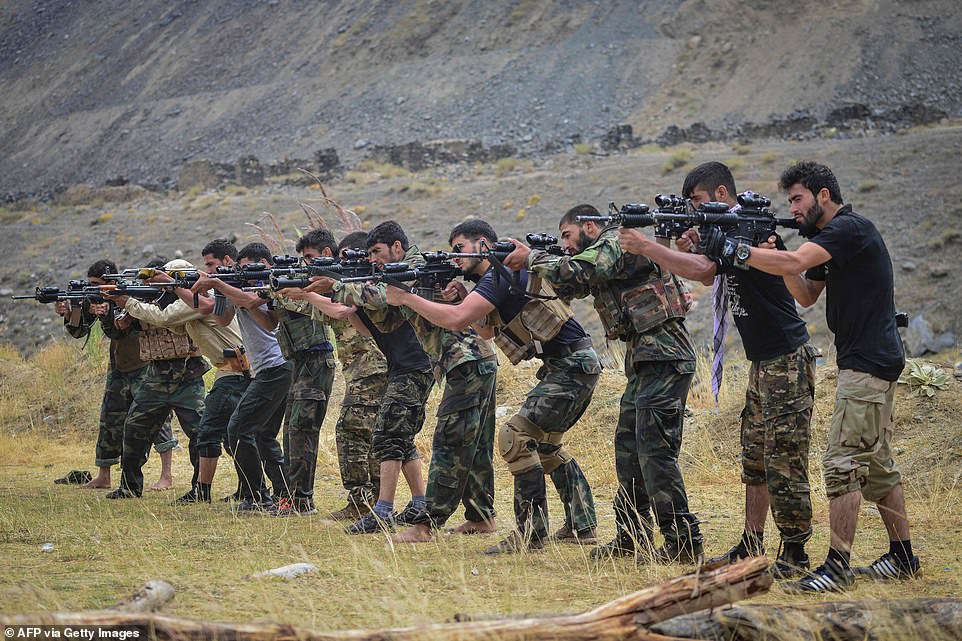 The anti-Taliban uprising forces have vowed to defend the 170,000 residents, most of them Tajiks, who live in the Panjshir valley 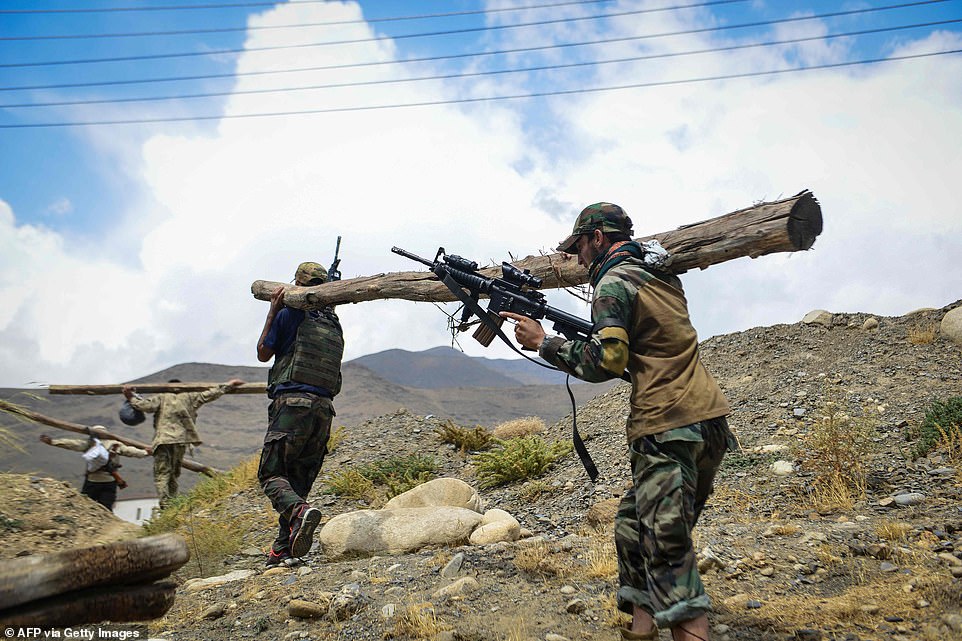 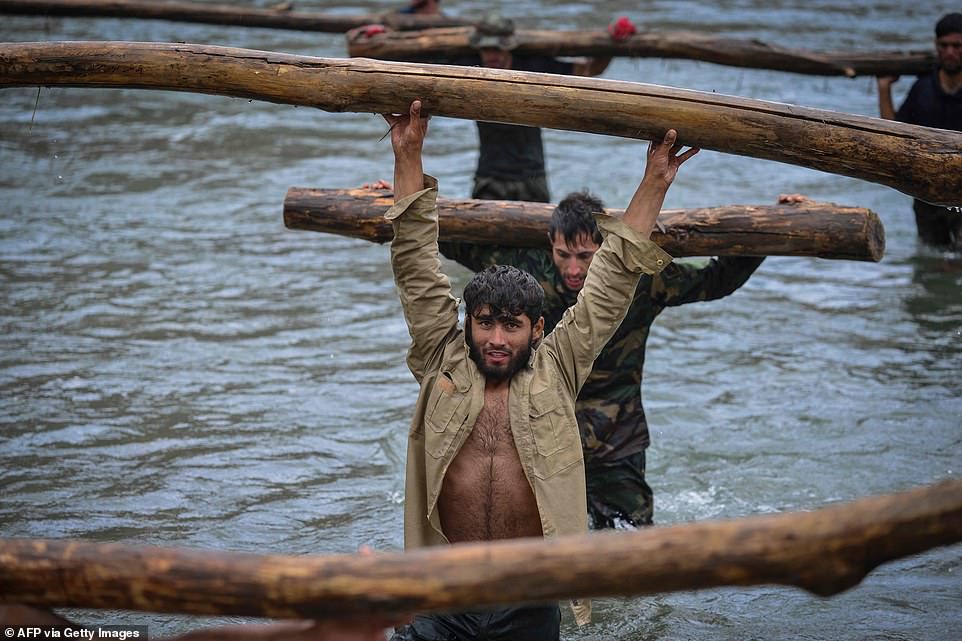 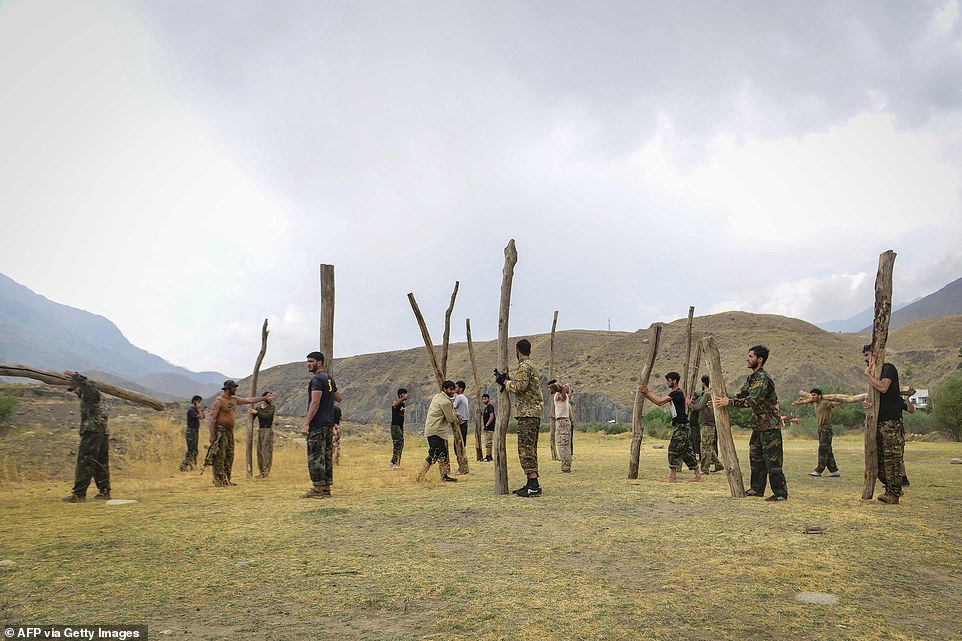 Resistance fighters, dressed in military gear, assemble and train after vowing never to surrender to their new Taliban leaders 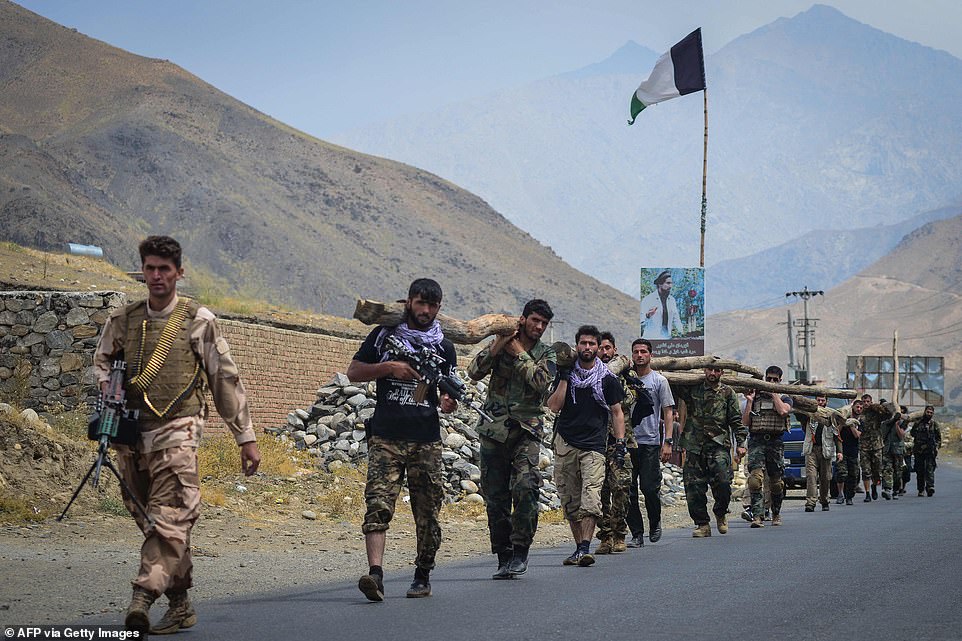 The Northern Alliance is being led by Ahmad Massoud, 32, the British-educated son of a legendary freedom fighter in the Panjshir Valley 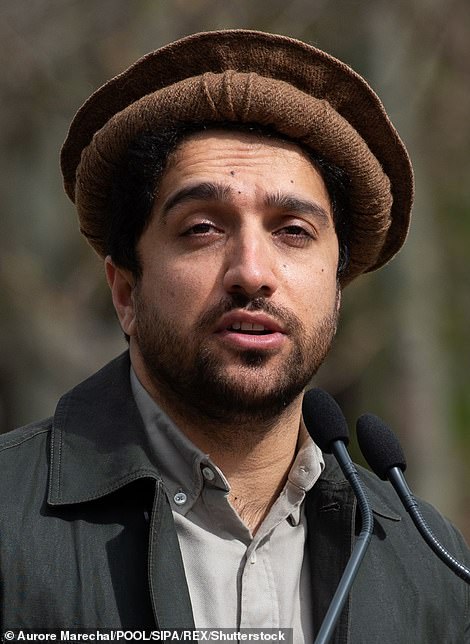 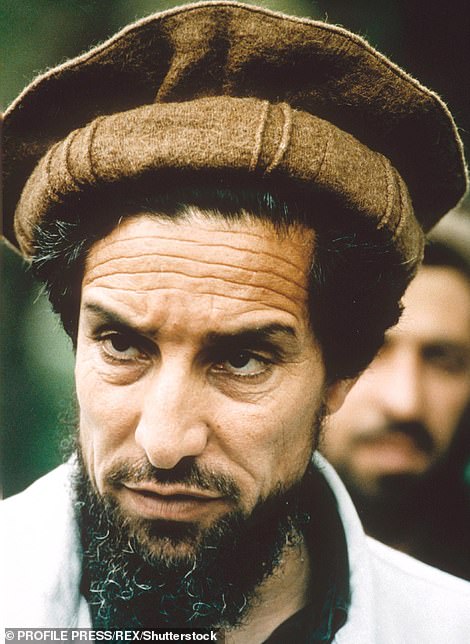 Ahmad Massoud (left), leader of the Northern Alliance and son of ‘the Lion of the Panjshir’, says that no Taliban fighter has yet dared to enter the narrow gorge into the valley. He was only 12 when his father, Ahmad Shah Massoud (right), was murdered by Osama bin Laden’s Al Qaeda network 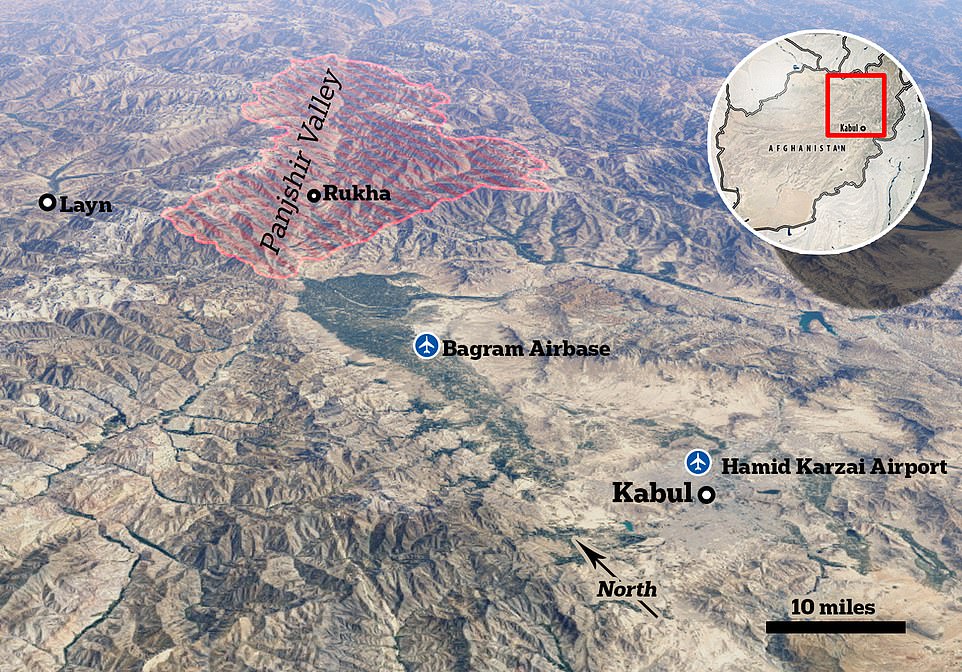 PANJSHIR VALLEY: The valley lies around 100 miles north of Kabul, overlooked by the Hindu Kush mountains and with narrow approaches ideally suited for ambushes, the river valley stretches for miles, opening into broad meadows where its 170,000 people live

The Taliban, having waged a 20-year insurgency, already appear to be amenable to the idea that they could use some allies to help govern. They have asked the health minister and the mayor of Kabul to remain in office.

But if Mr Massoud wants to bring them to the negotiating table, he will need munitions.

The fledgling leader has conceded that his forces, which one aide said numbered more than 6,000, would need international support if it came to fighting.

The Taliban have funded themselves not only through opium, but also with covert support from allies, many of them regional rivals to the United States.

However, Mr Massoud’s resistance might not be able to rely on Washington which has been emphatic that it wants a full withdrawal from Afghanistan.

The fighter, whose father is renowned in France, has been lobbying Emmanuel Macron’s government for backing in the struggle.

French journalist journalist Bernard-Henri Lévy said: ‘[France] is the country in the world where his name resonates the most … and Massoud is, today, the only one who resists and holds on.’

Speaking to Politico after a meeting with Massoud last October, Mr Lévy said: ‘What I think, and given the historic ties with the father, it is normal that France provides him with the most advanced help.’

It is believed that the Northern Alliance are being sponsored by Tajikistan with a photo last week showing a Tajik helicopter landing in the valley.

‘The morale of the resistance is high. We are grateful to our neighbour for all the support they started since beginning.’ 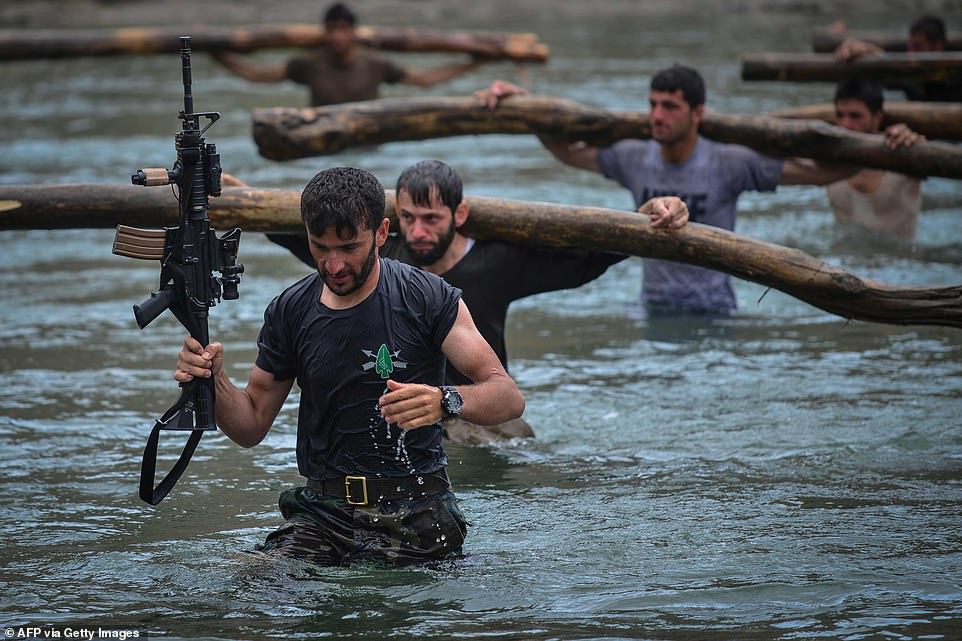 While the Taliban have seized power in Afghanistan, the resistance fighters have said they will defend the 170,000 residents in Panjshir 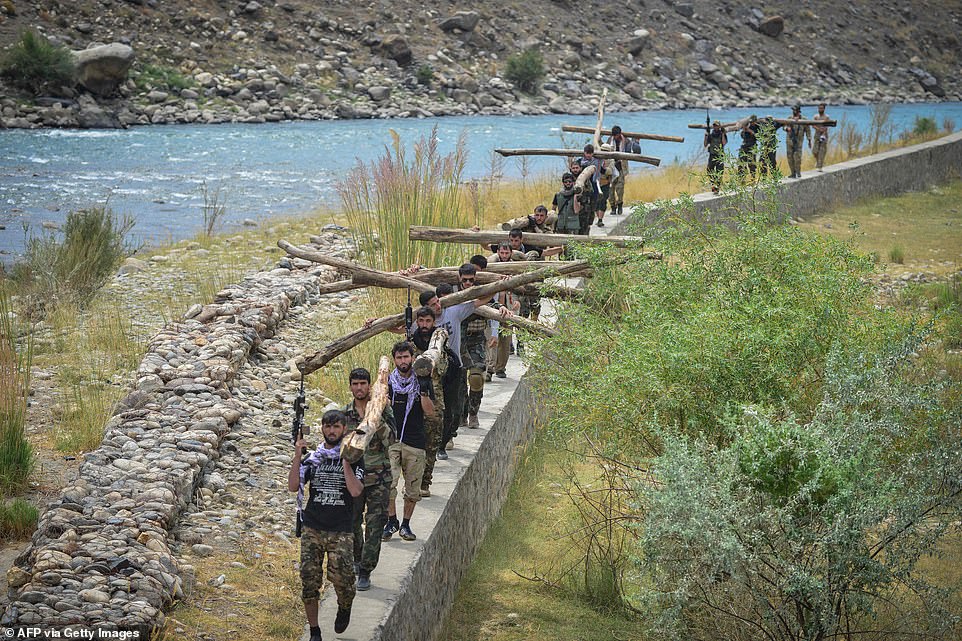 Groups of fighters walk through the mountains and train in the Panjshir province , with Mr Massoud, saying that no Taliban fighter will pass through the narrow gorge into the valley 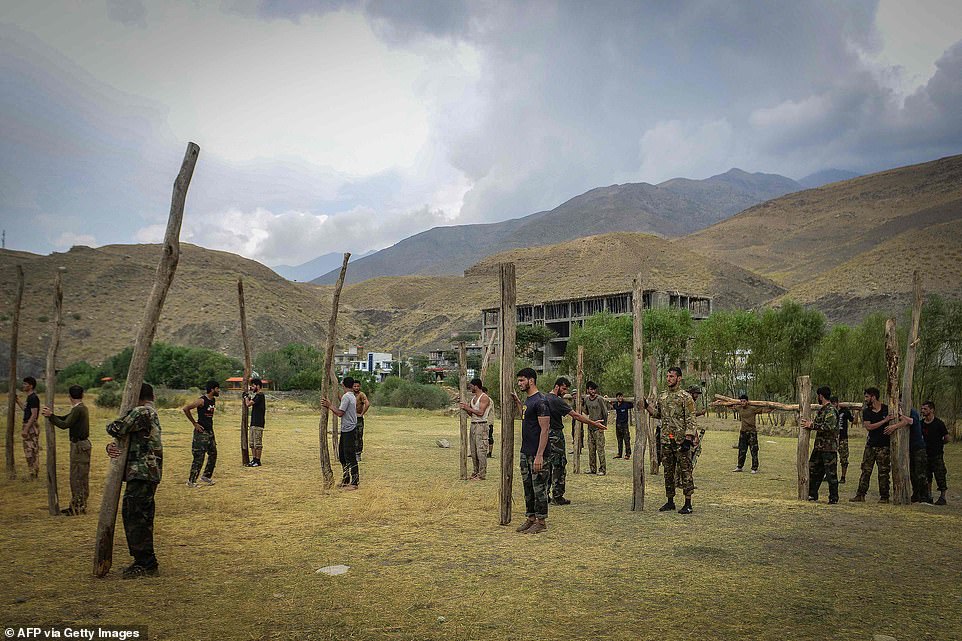 The resistance group is made up of Afghan Army generals, their staffs and some soldiers, who have vowed to defend the region 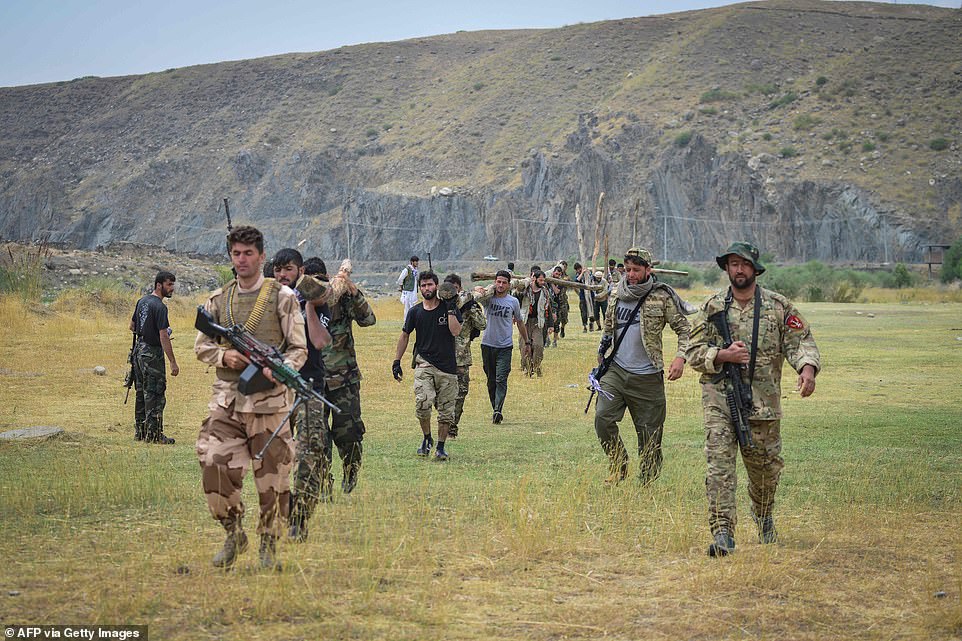 It is believed that the Northern Alliance are being sponsored by Tajikistan, with a tweet from the group saying they had ‘imported enough equipment, guns, & foods’

The scenes come as so-called Islamic State militants fired a volley of rockets at Kabul’s rapidly emptying international airport today, with just hours left before a deadline for US forces to withdraw at the end of America’s longest war.

The Pentagon is tight-lipped about final operations and has not specified when the withdrawal will be completed ahead of Tuesday’s deadline.

But spokesman John Kirby told reporters ‘there is still time’ for Americans to join a massive airlift that has allowed more than 116,000 people to leave since the Taliban swept back into power two weeks ago.

All day on Monday, US military cargo jets came and went despite the rocket attack, which did not hurt anyone.

The Taliban released a video shot from the airport’s grounds, saying the Americans had removed or destroyed most of their equipment and that troop numbers were far lower.

‘It looks like today will be the last day,’ one of the unidentified fighters said.

With the departure of the last of its troops, the US is ending its 20-year war with the Taliban back in power.

Many Afghans remain fearful of them or further instability, and there have been sporadic reports of killings and other abuses in areas under Taliban control despite pledges to restore peace and security.

In the last 24 hours, the US military evacuated about 1,200 people on 26 C-17 flights, while two coalition flights flew out 50 others, the White House said.