A California restaurant owner is fining his patrons $5 for wearing a mask or ‘bragging’ about COVID vaccine – which he says he’ll donate to charity.

Chris Castleman, the owner of Fiddleheads Cafe in Mendocino, has been a vocal critic of the coronavirus restrictions since early in the pandemic, often making the news for his controversial stances.

California and Hawaii are the only two states which still require masks indoors for those who have been vaccinated after the Centers for Disease Control and Prevention said vaccinated people do not have to wear a mask in most settings.

Fiddleheads, which displays a ‘Don’t Tread On Me’ flag in the window, posted signs on its windows on Monday announcing its latest policy, SF Gate reported.

The sign reads: ‘$5 FEE ADDED TO ORDERS PLACED WHILE WEARING A FACE MASK.’ 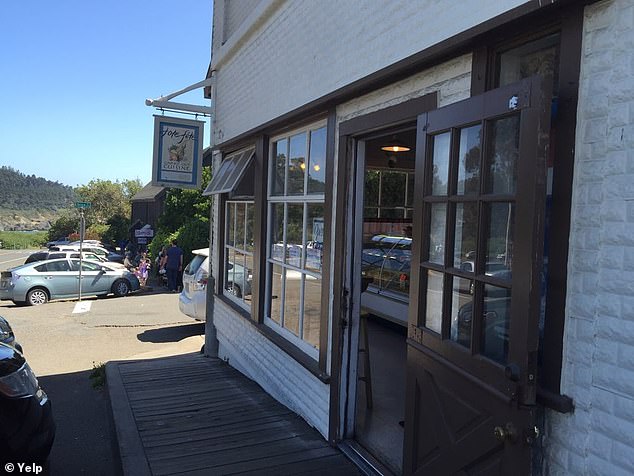 Chris Castleman, the owner of Fiddleheads Cafe in Mendocino, pictured, has been a vocal critic of the coronavirus restrictions since early in the pandemic 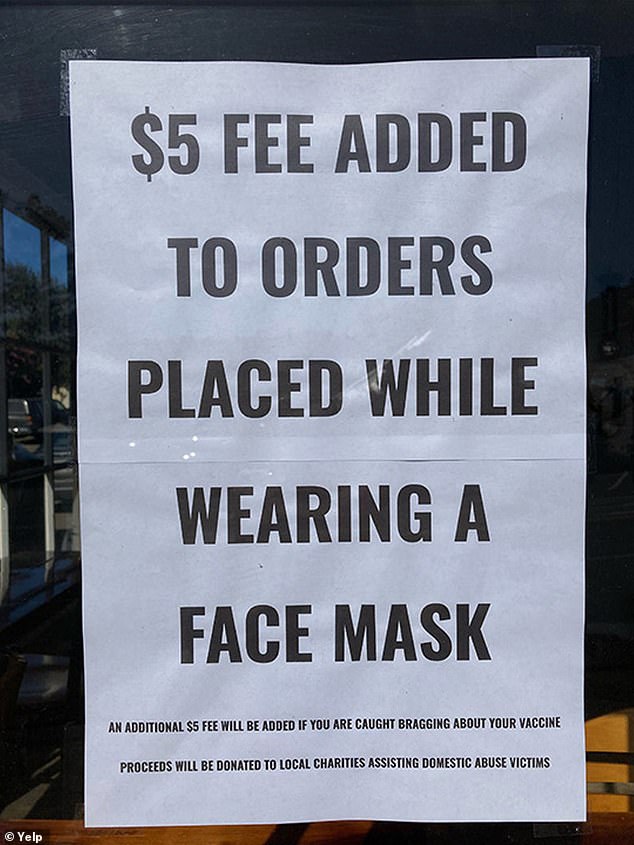 Castleman posted a sign on Monday that reads: ‘$5 FEE ADDED TO ORDERS PLACED WHILE WEARING A FACE MASK’

The message included fine print underneath the bold text revealing that people caught ‘bragging’ about their COVID-19 vaccines would pay the same price.

‘An additional $5 fee will be added if you are caught bragging about your vaccine. Proceeds will be donated to local charities assisting domestic abuse victims,’ the fine print reads.

Castleman told Fox News that charities working to combat domestic abuse, suicide and poverty ‘have been overwhelmed by collateral damage of the government lockdowns.’

‘I’ve been asked this entire time to put on a mask and that that’s not a large request, all I’m asking is a $5 donation to charity and I don’t think that’s too much,’ he said.

Castleman told Fox News that so far about 100 patrons have been ‘more than willing’ to pay the fee after learning it’s going to charity – while others ‘are really upset by it.’

‘You can see outside they were about to come in and they see the sign and they turn away,’ he said.

Castleman plans to keep the signs up ‘for at least a couple of months,’ he told SF Gate. He said he doesn’t believe Mendocino County officials will rescind its mask mandate anytime soon.

Castleman’s neighbors have been less-than-thrilled about his latest headlines, noting locals have been directing their anger at his policy at their businesses.

Meredith Smith, who owns the neighboring restaurant Mendocino Cafe, told SF Gate that people keep confusing her business for his – even leading her to confront him over his ongoing shenanigans in April.

‘I get a lot of feedback directed at him. They think I’m him, we’re across the street from one another,’ Smith told the outlet. 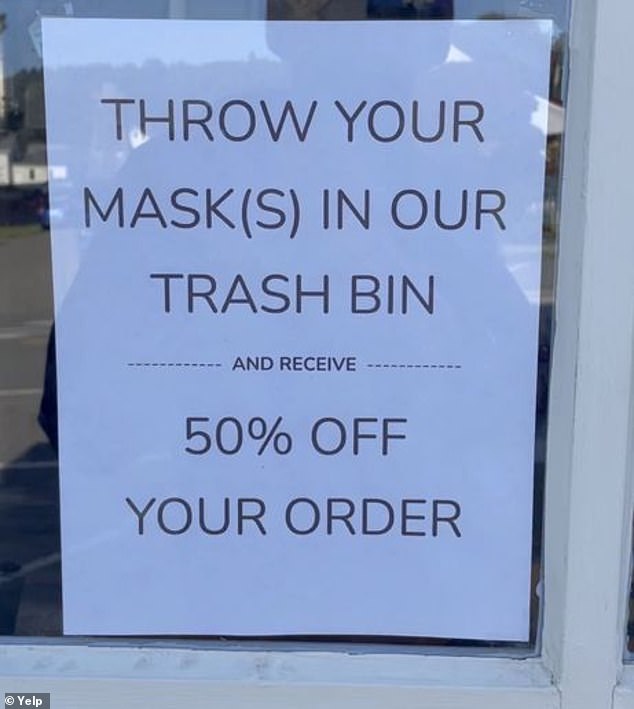 Fiddleheads made headlines again in mid-March when Castleman posted a sign that read: ‘Throw your mask(s) in our trash bin and receive 50% off your order’ 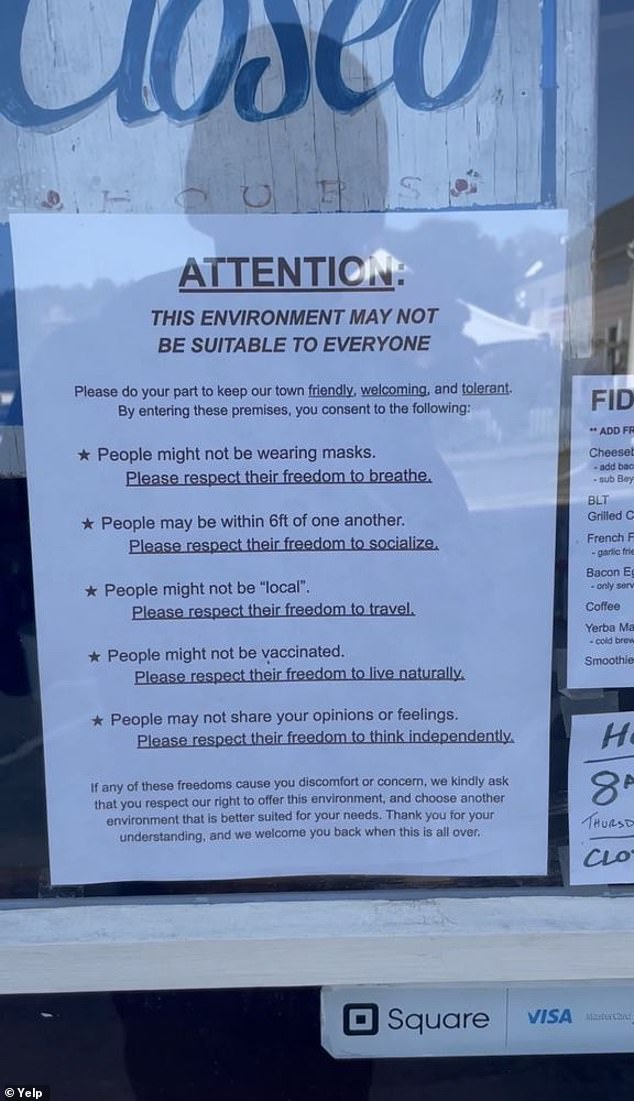 Last May, during the onset of the COVI-19 pandemic, Castleman made a blog post in which he said he would not comply with ordinances that were taking effect across California and the country.

‘I respect everyone who has been taking actions over the past few months to protect their family, friends, coworkers, and the community. But protecting our health does not just end with COVID-19,’ he wrote.

‘There are serious negative effects of an economic shutdown and lack of social interaction on a person’s mental well being. Depression, suicide, child abuse, domestic abuse, substance abuse, etc. These sometimes permanent consequences have been researched and documented for decades.’

Castleman appealed to his patrons to ‘consider our concerns for mental sanity and financial freedom during this unprecedented crisis.’

‘Just because our solution is different than yours doesn’t make it wrong, and it certainly should not make us criminals. I love and care for Mendocino, which is why I will not close my doors to those in this town asking me to keep them open,’ he said.

In the post, he said he ‘will not cover my business in plexiglass and plastic tarps’ and ‘will never be forced to hide my smile.’

Then last June, Mendocino County officials fined him $10,000 for his defiance of a countywide health orders, The Press Democrat reported.

‘In general, the stance I have on all this is it’s about personal responsibility and personal choice. It’s not about me being a police officer,’ Castleman told the outlet.

The outlet noted at the time that Castleman had posted signs in front of his business that read: ‘Our freedom doesn’t end where your fear begins.’

The Press Democrat reported that Castleman then faced a second $10,000 citation for violating the county’s health order.

Castleman decided to board up his Fiddleheads Cafe instead of forcing his seven employees to wear masks or otherwise comply with his county’s health order, the outlet reported.

A code enforcement officer with the county had ordered him to stop operating his business unless he agreed to comply with coronavirus restrictions.

Castleman put wooden boards over his windows spray-painted the words: ‘Closed by order of Mendocino County,’ the outlet reported. It was not immediately clear when he decided to reopen his Fiddleheads Cafe.

County officials at the time contested Castleman’s claim and told the outlet they did not order the restaurant to close.

‘We’ve done everything we can to work with the employer. What I heard from him is he’s not willing to agree to the state’s requirements,’ Supervisor Ted Williams said.

Fiddleheads Cafe made headlines again in mid-March when SF Gate reported that Castleman had posted a sign that read: ‘Throw your mask(s) in our trash bin and receive 50% off your order.’

The sign went viral after it was posted on TikTok and received at least 39,000 likes and almost 1,700 comments, the outlet reported.

Castleman told the outlet at the time that customers were split on his stances, but he received a slew of fake negative reviews online from people who had not even visited Fiddleheads.

‘It’s very alarming how people have gotten all up in arms about this sign — the sign isn’t breaking any law or any ordinances,’ Castleman told SF Gate.

He added: ‘My point is, if you don’t like me, that’s fine. I respect that opinion of yours, and you can go anywhere else in this county right now to eat and pretend that you’re in a safe environment.’

Schedule, scores and results as Ash Barty returns to the French Open

An independent Scotland would ‘totally’ sign up to the Euro, says SNP chief

Girl Kitty Spencer's father Charles was notably absent from her lavish wedding ceremony in Rome on...