Sir Richard Branson has paid tribute to his late mother Eve as he became the second oldest man to travel into space.

He has inaugurated the dawn of the age of space tourism by becoming the first billionaire to make it into space after the 70-year-old Virgin Galactic founder took off on a flight to the edge of Earth’s atmosphere in the VSS Unity plane.

Branson is travelling on VSS Unity, which launched from mothership VMS Eve with a live stream of the event starting at 3.30pm (09:00 ET) from Spaceport America in New Mexico.

The launch was delayed by 90 minutes due to bad weather in the area which arrived overnight which delayed the start of flight preparations. Once it reaches 50,000 feet the carrier plane releases Unity, a reusable, winged spacecraft designed to carry six passengers and two pilots into space. 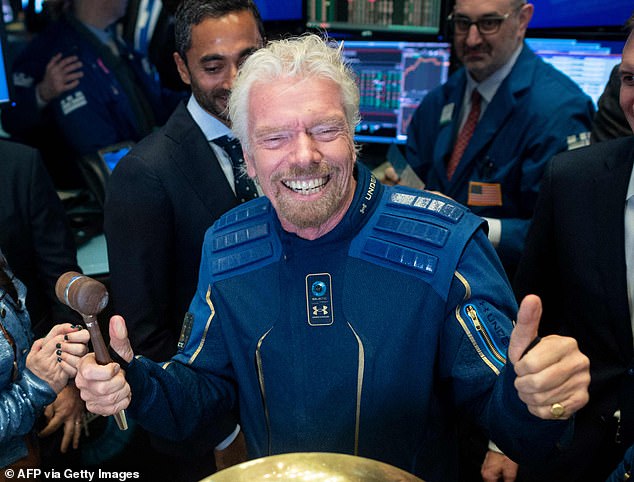 In a live stream on the company’s website, Sir Richard said: ‘Dear mum, you always told me to reach for the stars. Well, I took my own winding road but I always knew to follow your lead. You always pushed us to our limits.

‘When I was a child, you threw me out of the car miles from our house and urged me to find my own way home. You let me jump into a river to sink or swim.

‘You and Dad taught me and my sisters independence and loved us with fierceness and tenderness.

‘You were always an adventurer. You took glider lessons dressed as a boy, enlisted during World War Two. Toured Germany as a ballet dancer after the war. You flew treacherous routes as intrepid cabin crew for Start Up Airlines.

‘You took us into the great unknown on family holidays. You treated every day as a chance to explore.

‘Before the word existed, you were always an entrepreneur. You helped make ends meet by creating your own small businesses. You showed me how to grow a company, how to treat people, how to be creative, how to balance work and play, how to live.

‘You were always a romantic. You and Dad showed Joan and me the way to build a life filled with humour and heart, hope and humility, honesty and happiness. You showed us the value of kindness, the magic of laughter, the beauty of music and the joy of family.

‘You were always my guiding light of Virgin Galactic. You share with me that the day we named our mothership the MSE was one of your happiest.

In the emotional tribute, he said how she let him ‘jump into a river to sink or swim’ and threw him ‘out of the car miles from their house’, urging him ‘to find his own way home’

‘You always knew Eve would start my journey to space one day. Just as I always knew you would do the impossible for me.

‘Well, mum,  our mothership carries your name, will carry the next generation of dreamers into space.

‘You were always a dreamer. You urge me to strive for every opportunity I saw. You told me to chase my wildest fantasies and to live life to the full.

‘Well, the brave may not live forever. But the cautious do not live at all.

‘How you lived, how you loved and how you are missed.

‘Dad always said “isn’t life wonderful” and you both showed us it was. Always.’

He said that his father always said ‘isn’t life wonderful’, continuing that both of his parents always showed him and his siblings that it was 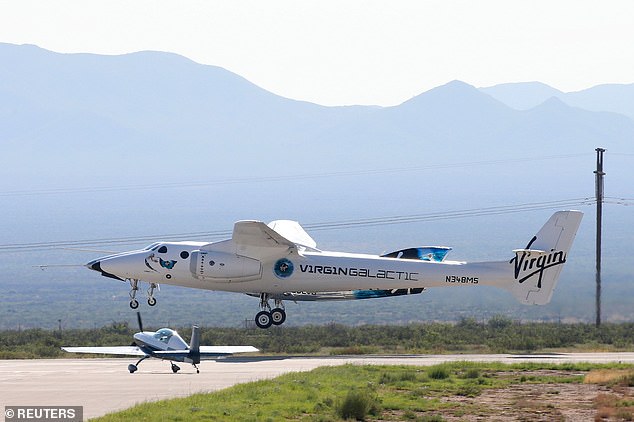 Pictured: The Virgin Galactic SpaceShipTwo space plane Unity flies at Spaceport America, near Truth and Consequences, New Mexico on July 11, 2021 before travel to the cosmos with Sir Richard Branson onboard with five other crew members

With a crowd of more than 500 watching, the plan was for the space plane to detach from the mother ship at an altitude of about eight miles, fire its rocket engine and then pierce the edge of space at about 55 miles up.

After a few minutes of weightlessness for the crew, the space plane was supposed to glide to a runway landing. The brief, up-and-down flight was intended as a confidence-boosting plug for Virgin Galactic, which plans to start taking paying customers on joyrides next year

Sir Richard was not supposed to fly until later this summer, but he assigned himself to an earlier flight after Bezos announced plans to ride his own rocket ship into space from Texas on July 20. More than 600 people have already made reservations for a ride into space with Virgin Galactic, founded in 2004.

The flamboyant billionaire, who was pictured cycling to the facility this morning, is the second oldest person to travel to space – after 77-year-old John Glenn in 1998. 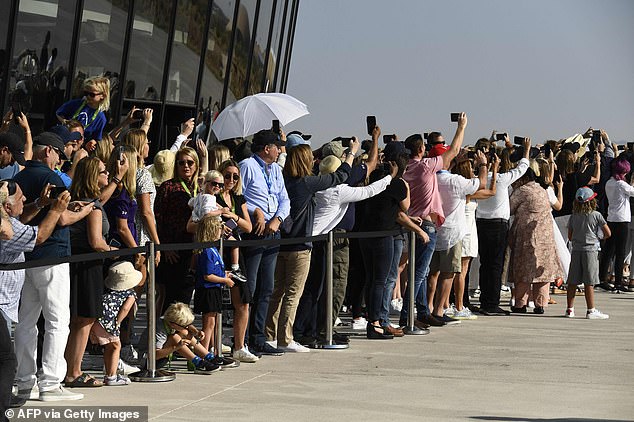 Rachel Thurlow had barely switched her pc on at work one morning when she was known as to a...

CPAC attendees weigh in: What should parents do about CRT in schools?

Fans BREAK IN to Wembley amid chaotic scenes