When celebrated interior designer Nicky Haslam sold his business, he thought the new owners would happily keep on pasting up wallpaper in the mansions of the rich and famous without him.

But, I can reveal, Nicholas Haslam Ltd is embroiled in a furious High Court battle with an Italian heiress over allegedly unfinished work.

Violetta Caprotti — who inherited a fortune from her supermarket billionaire father, Bernardo — is suing the firm, of which Paolo Moschino and Philip Vergeylen are co-directors, for £1 million.

The pair started work on her villa on the French Riviera in 2019, but it was interrupted by the pandemic and the company abandoned the scheme without ever completing it, she says.

She claims the ensuing delay and confusion resulted in leaks in her home, damaging the walls, flooring and carpets. 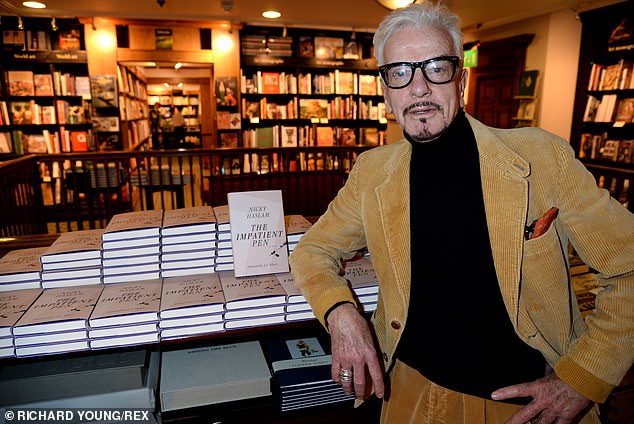 And that the handrail on the staircase was insecure and posed a serious risk of injury. Caprotti accuses Nicholas Haslam Ltd of failing to finish the work within a reasonable time.

A writ issued in London’s High Court claims the designers supplied goods of unsatisfactory quality which were not reasonably fit for purpose, and which were not installed correctly, either.

Haslam himself is concerned that people may link him to the claims of shoddy work, and says that such a case had never been seen under his leadership.

‘I’d like to think people know I’m not involved any more,’ he tells me.

‘It’s never happened before, so I don’t know what will happen or what people will think.’

Caprotti says she had to rent another villa in Saint Tropez at considerable cost, and was unable to use her home between April and October last year, causing her great inconvenience and expense.

Now she is seeking a price reduction of £202,500, and damages of up to £1 million for breach of contract, negligence and breach of statutory duty.

A spokesman for Nicholas Haslam Ltd’s lawyers tells me: ‘As the matter is subject to legal proceedings, it is not appropriate to comment other than to say that the claim is denied and is being fully defended.’

Daisy gets savvy in Savile Row

When Daisy Knatchbull became the first designer to have a women-only shop front in London’s Savile Row, she feared a frosty reception from the stuffed shirts.

In fact, the great-granddaughter of the 1st Earl Mountbatten of Burma tells me: ‘The street has embraced change and been so supportive. I feel very welcome.’

Daisy, 29, whose father is Philip Knatchbull, boss of arthouse cinema chain Curzon, wore a striking pink suit to a party in Mayfair this week.

She adds: ‘It’s a crying shame that there wasn’t a shop front for women [in Savile Row] before.’

It might be our favourite family show, but Strictly Come Dancing is made by a ruthless bunch, according to comic Frank Skinner.

Each week a celebrity reads out the voting terms and conditions, and Skinner says: ‘I turned down doing this once, and the Strictly group are unforgiving.

They’re like a sultan of old — once you offend them, you need to flee the country. They have great power as they’re a TV institution.

‘It’s a joyous experience with some nastiness, which is what people want.’ 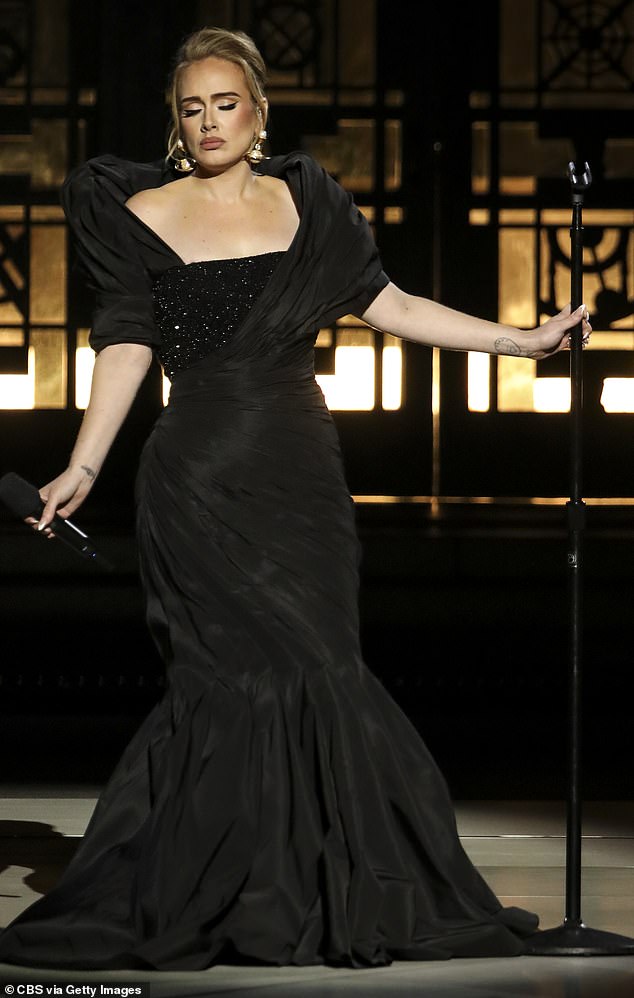 Adele picture performing in Los Angeles on October 24 for a primetime special named Adele: One Night Only that aired on Sunday

Adele’s new album will certainly struggle to live up to the hype, but famous guests at ITV’s London Palladium show An Audience With Adele were left shocked.

Not by the music, but by the absence of a goody bag, I hear.

‘We weren’t even given a copy of the album,’ wails one member of the audience, which included model Naomi Campbell, actress Emma Watson and funnyman Alan Carr.

‘It was a long and rather dull evening. There wasn’t even a party after to thank her friends for coming.’

Ungrateful swine! They were lucky even to hear her sing — tickets for her London shows sold out in minutes.

One person not moaning is Adele’s manager, Jonathan Dickins, who’s sitting on £20 million.

Time’s up for Hewer’s Aston 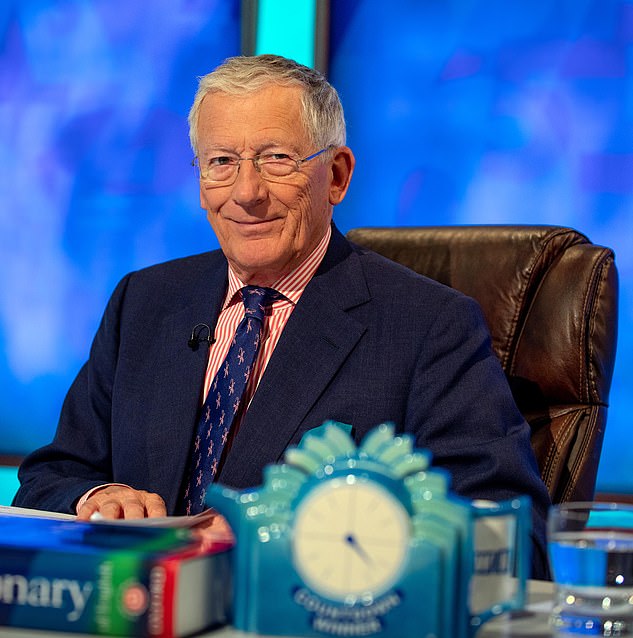 Nick Hewer pictured during his time hosting Countdown. He is now looking to sell his Aston Martin to help save the planet

Here’s a conundrum: former Countdown host Nick Hewer wants to help save the planet but loves his gas-guzzling Aston Martin.

‘I think the time has come for me to grow up and sell my beloved Aston Martin Rapide,’ he laments.

‘I want to do my bit for the environment.

‘Within a matter of years it will probably be a criminal offence to drive such a high-powered car anyway.

‘So, if I don’t put it on the market soon, who in their right mind is going to buy it?’

Despite his fame, Tebbutt, 47, is not given priority at top London restaurants.

‘If I call to reserve, they don’t recognise my name, which is disappointing,’ he says.

‘It’s lovely when you go to friends’ restaurants as you always feel special.’

Of her Bafta-winning film director boyfriend, Taika Waititi, she says: ‘I’m finally happy, and it’s taken me a long time to get here. I love him — he is so funny.’ 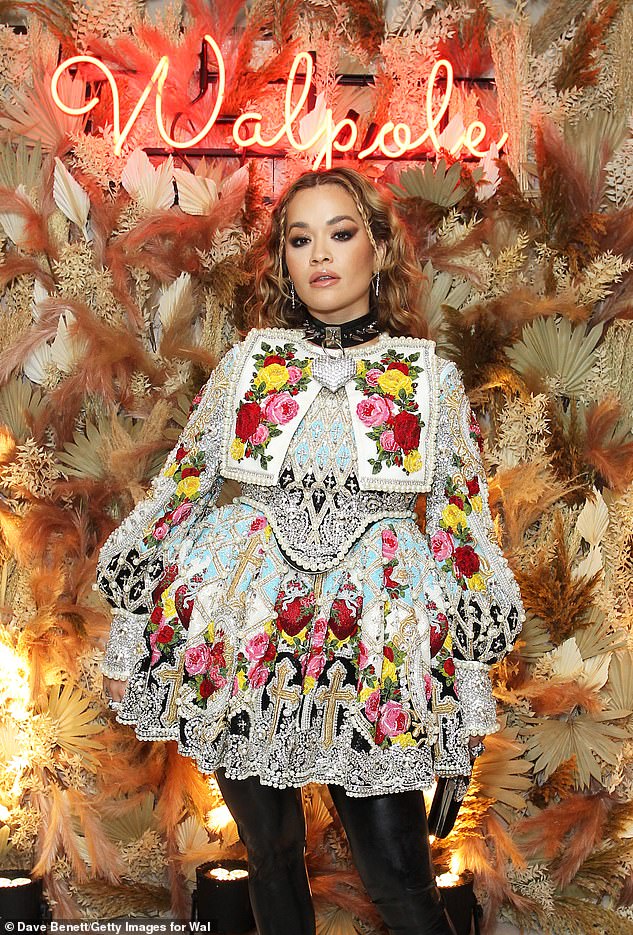 Rita, 30, who’s a close friend of society figures including Cara Delevingne and Lady Lola Bute, tells me: ‘People can just tell when you’ve found happiness — it radiates on your face.’

Taika presented Rita with the British Artistic Icon prize at the Walpole British Luxury Awards at The Dorchester in Mayfair.

‘I usually get a call from him after every race,’ says Christian, the husband of former Spice Girl Geri Horner.

‘He still gives me plenty of grief. He’s 91 now but is an avid follower of the sport and not afraid to voice an opinion.’