Hanna is calling from the shattered balcony of her second floor flat. ‘Such a golden piece of land, what a beautiful town and such lovely people!’ she shouts – at me and the rest of the world outside the Kremlin. ‘And then they did this! The oligarchs in Russia stole their billions and now they make war on us!’

Hanna is 83 years old, poor and sick. She once worked in a clothing factory in Kyiv. Today, every window in her apartment block has been broken by a blast. Some of the frames have been sucked out and lie in what passes for the surrounding garden.

But Hanna is lucky, relatively. She is still alive. And what she can see, from up there, is far, far worse. But you don’t need a grandstand view to appreciate the apocalyptic demolition of Borodyanka.

It has – or at least, had – about the same population and lies the same distance north west from the centre of the Ukrainian capital as the Hertfordshire town of Tring does from London. 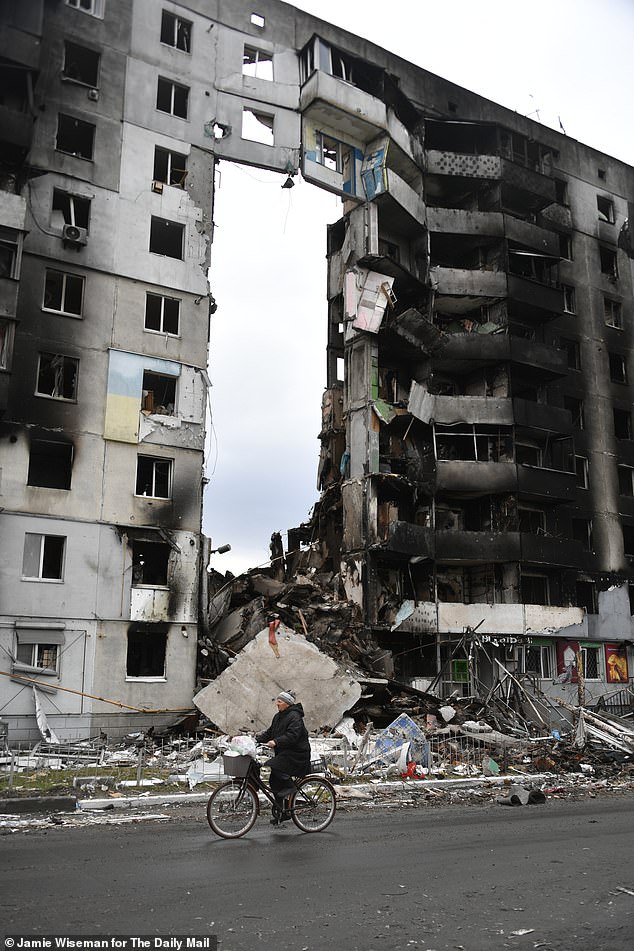 The destruction of housing blocks in the town of Borodyanka, west of Kyiv in Ukraine 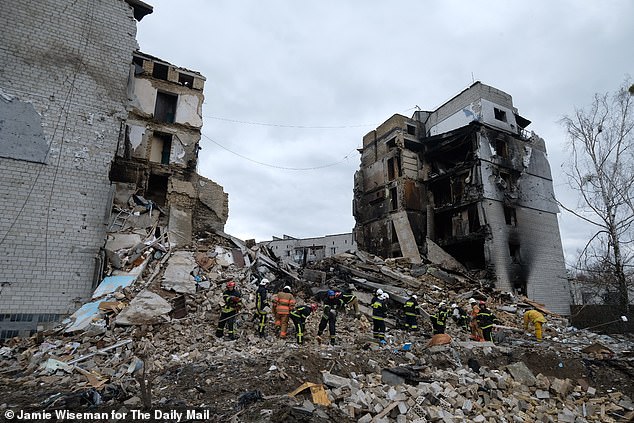 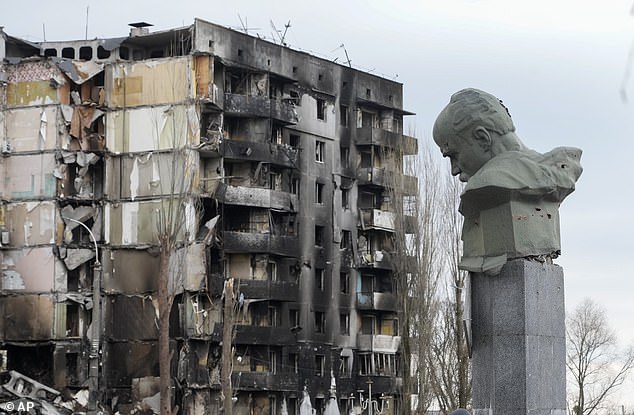 A monument to Taras Shevchenko, a Ukrainian poet and a national symbol, in seen with traces of bullets against the background of an apartment house ruined in the Russian shelling in the central square in Borodyanka, Ukraine, Wednesday, April 6 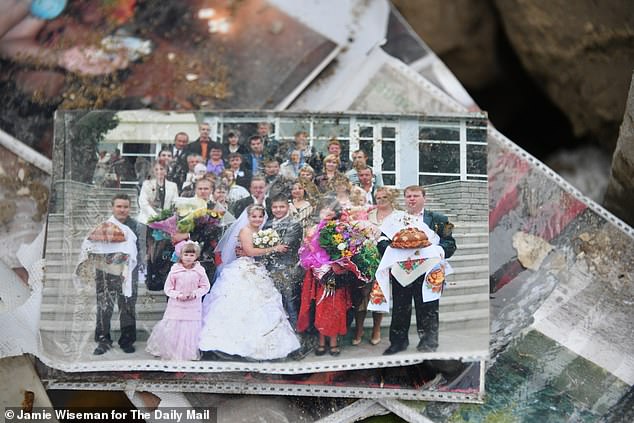 Distant memory: A wedding photo found in the rubble of the shelled town near Kyiv 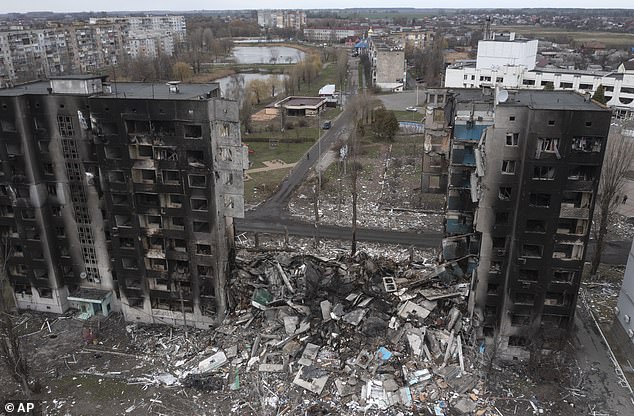 An heavily damaged apartment building following a Russian attack in the center of Borodyanka, Ukraine, April 6 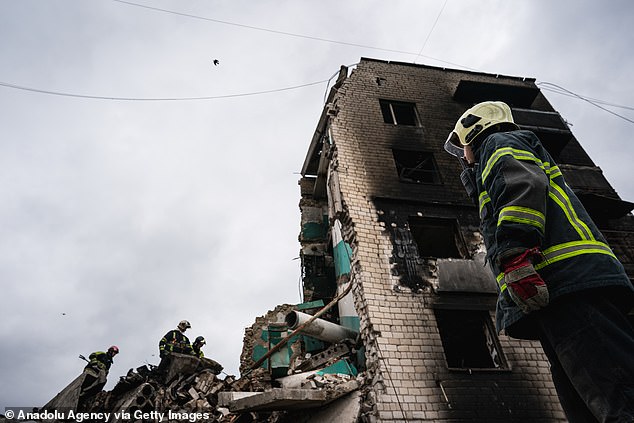 This is where local Ukrainian territorial defence unit volunteers attempted to halt the main Russian thrust from Belarus. They failed.

And what followed was the destruction of Borodyanka; the most intense urban devastation we have yet witnessed, in the battle for Kyiv and its surrounding region. As a result, perhaps hundreds of Hanna’s fellow residents are still trapped, dead or – less likely – alive under the rubble caused by Russian air strikes and tank assaults.

Nearby, the bottom seven storeys of a nine-storey apartment complex have disappeared entirely, as if some demonic cookie cutter had been placed against the block.

This was not a government building – this was where people were living.

Now, a massive rectangle of rain-filled sky is framed by fragile concrete. And the interiors of the flats that once occupied the space have been collapsed, or are scattered across the adjoining highway. 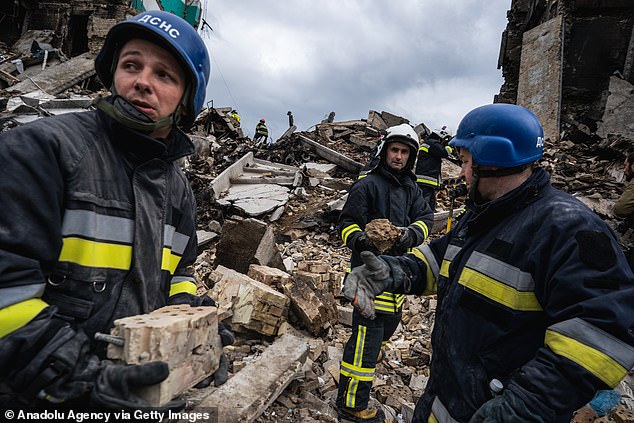 Although the Ukrainian army regained control of Borodyanka, it is now a ‘ruined town’ strewn with destroyed buildings and burnt armoured vehicles 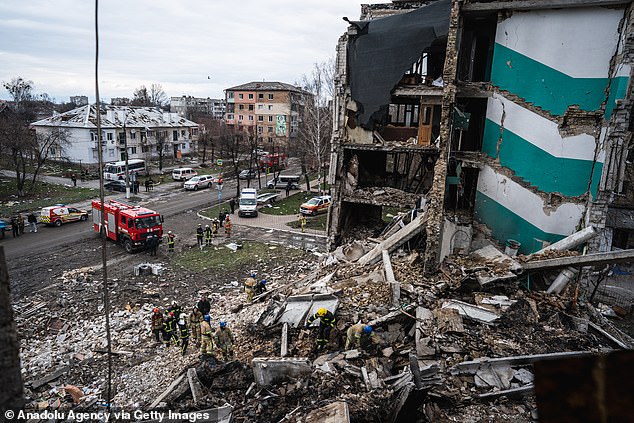 The devastation in the town that usually has 13,000 people living in it is plain to see 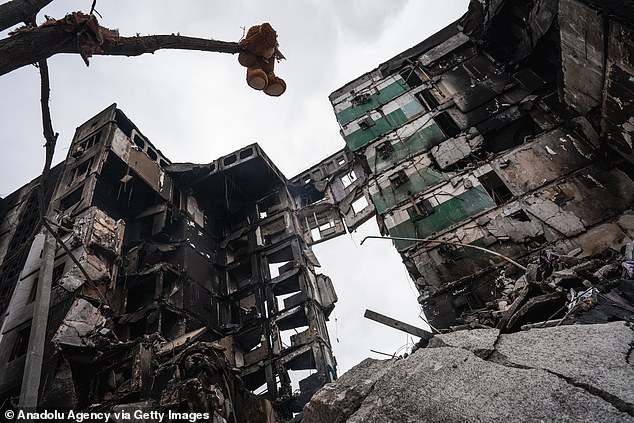 That road was originally named after Lenin. Now it is Central Street. They will have to think of something less prosaic, because what has happened here should not be forgotten.

In the park across the way there is a vast rubbish tip of personal effects: tea trays, quilts, a child’s pink plastic watering can, underwear, jumpers, puzzle books, a Turkish rug, dolls.

The evidence of whole lives being lived is now in the mud. Bath towels and a teddy from the same flats are flapping in the trees. The rain intensifies. It is utterly miserable.

One can now pick out the wallpaper choices on every storey. The fifth floor has a fleur-de-lys pattern although the rest of the interior has followed gravity.

It takes us more than two hours to reach Borodyanka because bridges have been blown up by the Ukrainians to stop the Russian advance. We skirt around the now infamous satellite town of Bucha, which has its own horrors, and out into a flatland of huge fields, copses of silver birch and a highway of domestic vehicle wrecks. 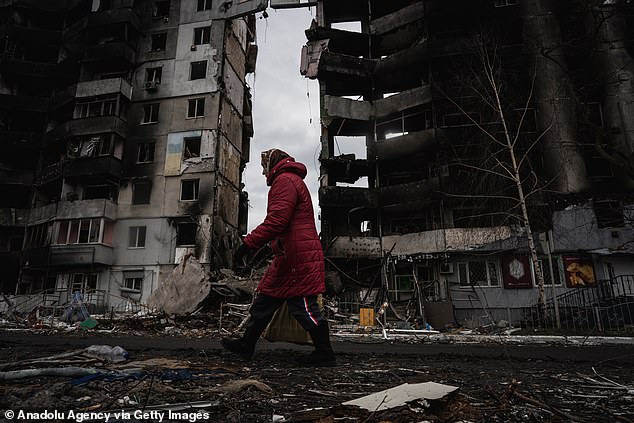 Most of these had been marked by Ukrainian wags with the letter ‘V’ – the identification sign used on many Russian tanks. Those military wrecks can be seen here too.

Shortly before Borodyanka, we passed a marsh in which a couple of dozen magnificent white storks were standing. They are Ukraine’s national bird. It is considered lucky here if they visit your village.

As we approach Borodyanka, via a satellite village, there are signs of extensive looting of a parade of two dozen shops, with shutters ripped out or windows smashed. One of the shops had been full of display mannequins, which now spill grotesquely out on to the pavement.

Then we reach the roundabout where Borodyanka begins. Carnage. It appears that a major battle was fought here. Two armoured vehicles are burned out. Every building within my eye line has been eviscerated.

The damage is more intense than in Bucha, a much larger community. Tank tracks have churned the mud. Tank rounds and heavy machine guns have churned everything else. ‘When the Russians came our men did not have enough heavy weapons,’ a woman with a bicycle tells me. ‘They fought tanks and aircraft with only rifles and Molotov cocktails.’

Many of the residential buildings on either side of Central Street are – were – high-rise Soviet-style blocks. A number have collapsed into rubble or had great bites torn out of them by air strikes. The ruins crack and groan in the bitter wind.

Rescue teams are at work, shifting the tons of rubble from a block destroyed by an air strike next to the roundabout.

‘Emergency workers from the whole of Ukraine have come here to help,’ a female firefighter explains. ‘We do not know the precise number of casualties yet.

‘We are waiting for heavy equipment. We plan to reach the basements within a week, but some buildings might take more time. We do hope to find people alive. But you have to bear in mind that it’s been almost a month and the weather has been very cold.’

A faint hope. There is talk of 300 to 400 civilians missing and dead in the rubble.

Another elderly woman – the daughter of a Soviet army colonel – tells me how the local hospital could not cope with all the bodies found after the fighting.

Anton Herashchenko, official adviser to President Zelensky, is at the scene.

‘We will make sure we will rebuild this place, but we would like the whole world today to see what Putin and the Russian army have done,’ he says.

‘In Bucha they killed people in the streets with guns. Here, it was by airplanes and bombing.’

The only sound is the thump of bricks being thrown by firefighters from the rubble mountains behind him and the cawing of rooks in the trees around.

For the foreseeable future, Borodyanka is a dead town.

The Most Anticipated Gaming Novelties Of This Year

How To Be Anxiety Free Reviews 2022

How To Be Anxiety Free Reviews 2022