Rishi Sunak is drawing up a compensation package to help firms stuck in Tier Two, senior Treasury figures have indicated.

Treasury minister Jesse Norman yesterday told MPs complaining about a lack of support that the financial package was ‘evolving’.

Tom Scholar, Permanent Secretary to the Treasury, said the Chancellor was considering a range of measures to help businesses and individuals hit by the sudden imposition of the new ‘traffic light’ system.

Mr Sunak yesterday underlined the damage caused by Covid restrictions, citing forecasts that the lockdown would make GDP 3 per cent smaller in the long term.

He said it was clear that lockdown measures ‘cause economic damage’.

He added: ‘Whether it’s the OBR (Office for Budget Responsibility) or the IMF (International Monetary Fund) they project 3 per cent scarring which will mean our economy potentially being £70-80billion smaller in the future than it would have been. 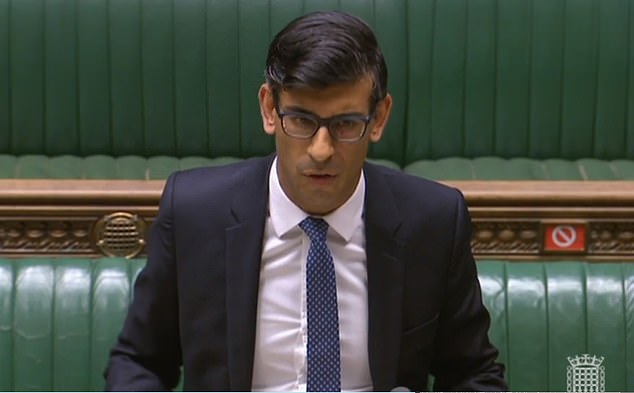 It has been indicated Chancellor Rishi Sunak, pictured, is drawing up a compensation package to help firms stuck in Tier Two as he underlines damage caused by Covid-19 restrictions

‘That will obviously have an impact on our ability to fund public services and protect people’s jobs and livelihoods.’

Labour MP Abena Oppong-Asare said ministers needed to do more to help Tier Two firms ‘that realistically cannot operate but are not legally required to close’.

Mr Norman replied: ‘We are acutely aware of the financial costs on those businesses, as we are of those on businesses that have been forced to close, and that is why we have put in place an evolving and comprehensive programme of support.’

The Treasury declined to comment on possible support last night. But options could include allowing firms in Tier Two to access the new Job Support Scheme (JSS).

In areas where Tier Three restrictions have been imposed, firms forced to close are able to access the JSS, which will pay two-thirds of wages of staff unable to work.

In Tier Two areas, people from different households are not allowed to socialise indoors in pubs and restaurants, leaving many venues facing a severe decline in trade.

In evidence to the public accounts committee, Mr Scholar acknowledged that firms in Tier Two would face a ‘greater’ economic impact than those in Tier One, where only standard social distancing rules apply.

Asked whether Mr Sunak was looking at extra aid for Tier Two, Mr Scholar said: ‘Ministers are considering the economic impact of the pandemic.’

Tory MP Gareth Bacon, whose Orpington constituency was caught up in the decision to place London into Tier Two, said the move will ‘force many companies into bankruptcy’ unless more help was given.