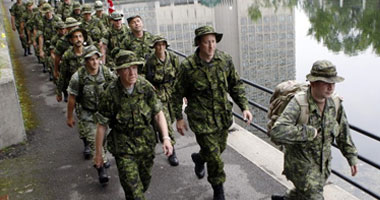 The rise in extremism and hatred among the Canadian army has caused increased anxiety among federal officials, especially Canadian Defense Minister Harjit Sajan, who confirmed that Ottawa took a number of measures to enhance awareness among members of the armed forces.

This follows a number of high-profile incidents in recent years that have raised concerns about the extent to which hate groups and right-wing extremists have reached the ranks of the military, which also deals with more systematic discrimination.

In a press interview, the Minister of Defense announced the formation of a special advisory team consisting of former military personnel, whose mission is to research how the armed forces can eliminate discrimination and hatred in their ranks, especially the rights of indigenous people and people of dark skin.

And Canadian Prime Minister, Justin Trudeau, said this week in a separate interview that confronting hatred and extremism will be a top priority for the next chief of staff who will succeed General Jonathan Vance, the current chief of staff.

The liberal federal government has long distanced itself from directly inserting itself in the internal affairs of the military in recent years, and has taken a largely hands-off approach to dealing with misconduct and other issues, leaving it to senior officers to deal with.

This was before a series of incidents linking some service members to far-right groups and other obnoxious behaviors, which coincided with growing concern in Ottawa about the rise in such incidents among the Canadian public and elsewhere.

Trudeau’s focus on tackling extremism, when asked about the qualities he is looking for in the next Canadian defense minister, underscores the degree to which the liberal government is concerned about the presence of extremists in the military.

The past few years have seen a number of high-profile cases of alleged extremism in the armed forces, including a former Canadian Army reservist who was an alleged recruiter for a group of neo-Nazis who is now in detention on gun charges in the United States.

The military is also investigating the fourth group of Canadian Ranger Group over concerns that some members may associate themselves with far-right groups. Authorities arrested a member in July after a truck drove through the gates of the prime minister’s residence. He was accused of wandering and heavily armed near the residence of the prime minister and governor-general this summer.

Dozens of other active service members have previously been identified by Military Intelligence as belonging to hate groups or who have made racist or discriminatory statements. While some were forced to leave the army, others were permitted to remain after being disciplined.

The Minister of Defense believes that the armed forces have come a long way in raising awareness among their members about racism and hatred and taking measures to combat them, although he believes that the number of incidents committed with their motive within the military establishment is still high.

Everything a Band-Aid Can't Fix: A Teen's Guide to Healing and Dealing with Life