Housing prices are expected to fall next year after the post-lockdown market boom fizzles out, experts have warned.

The initial housing boom was partly fuelled by pent-up buyer demand as the nation emerged from lockdown, various housing market reports have suggested.

But online searches for the UK’s main property websites have dropped after their initial surge, with forecasters warning this signals the end of the market upturn. 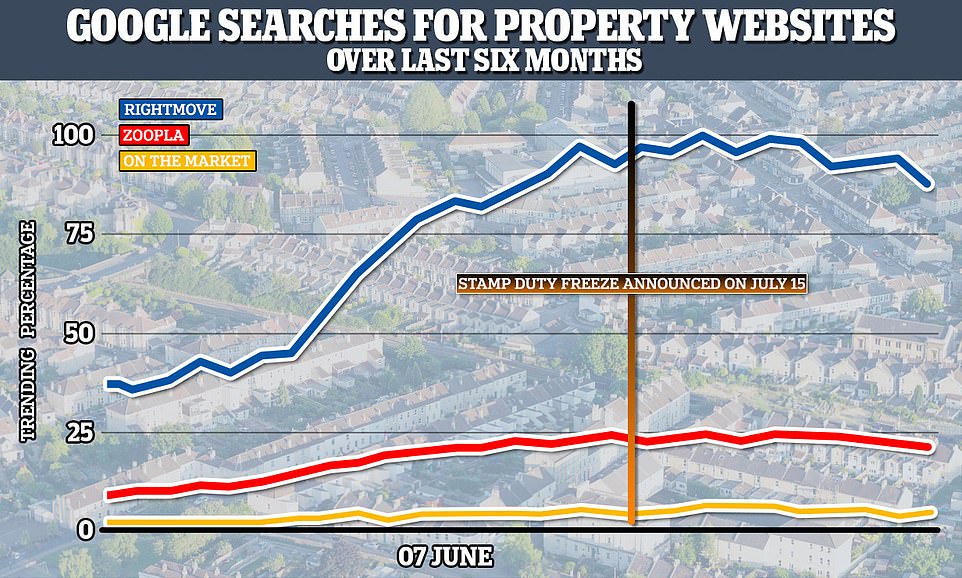 Google searches of the main property websites has dropped, data from the online search engine shows, indicating that the UK housing market boom is set to fizzle out 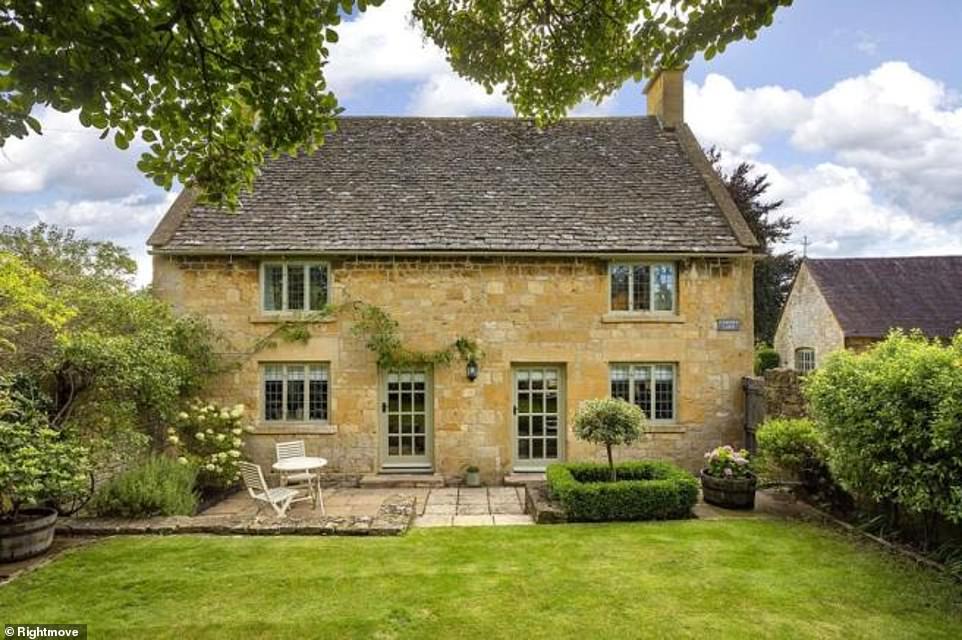 This home in Chipping Campden in Gloucstershire is on sale on property website Rightmove for £1,450,000, but if house prices fall as Pantheon Macroeconomics forecasts, it will be worth £1,406,500 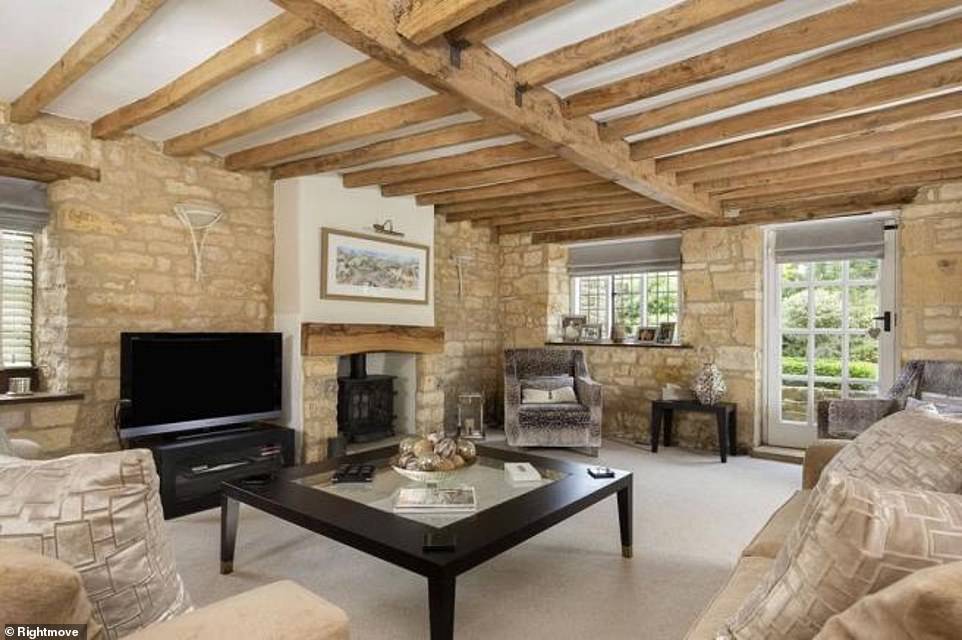 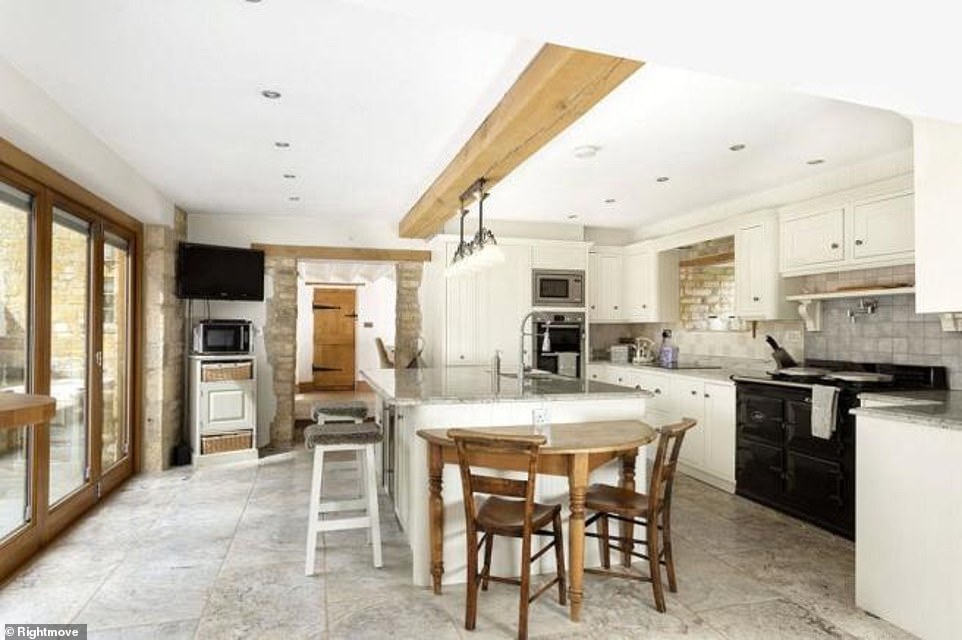 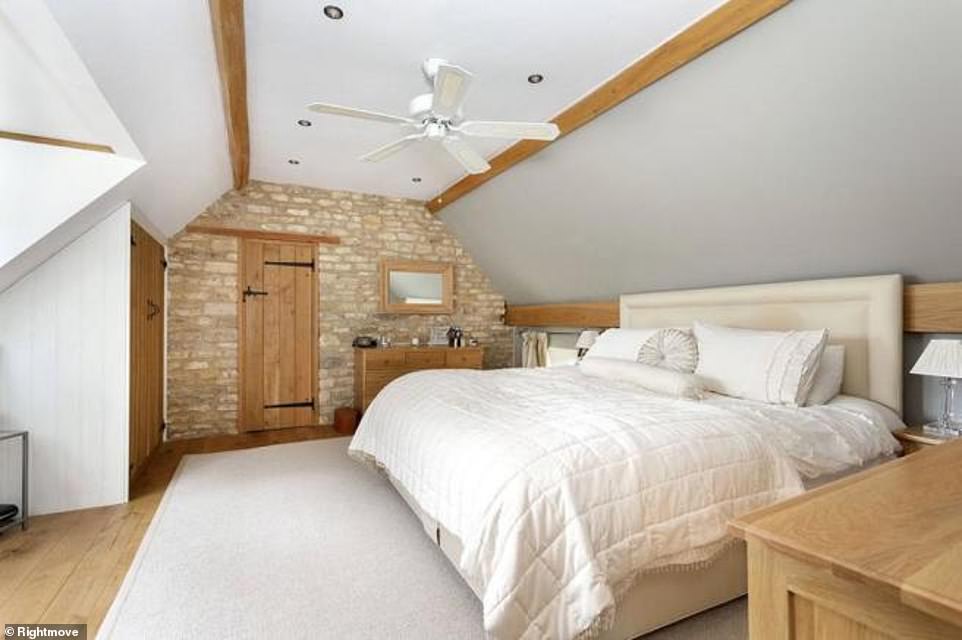 Estate agents have seen a rise in people buying homes in villages and rural areas of the UK, like this home in Gloucestershire

Google search data suggests showed a drop off in the number of potential buyers visiting the three main property sites.

Analysis by Pantheon Macroeconomics found interest in key phrases, such as ‘Rightmove’, ‘Zoopla’ or ‘On The Market’ slowed from a peak in late August, dropping by seven per cent in September. 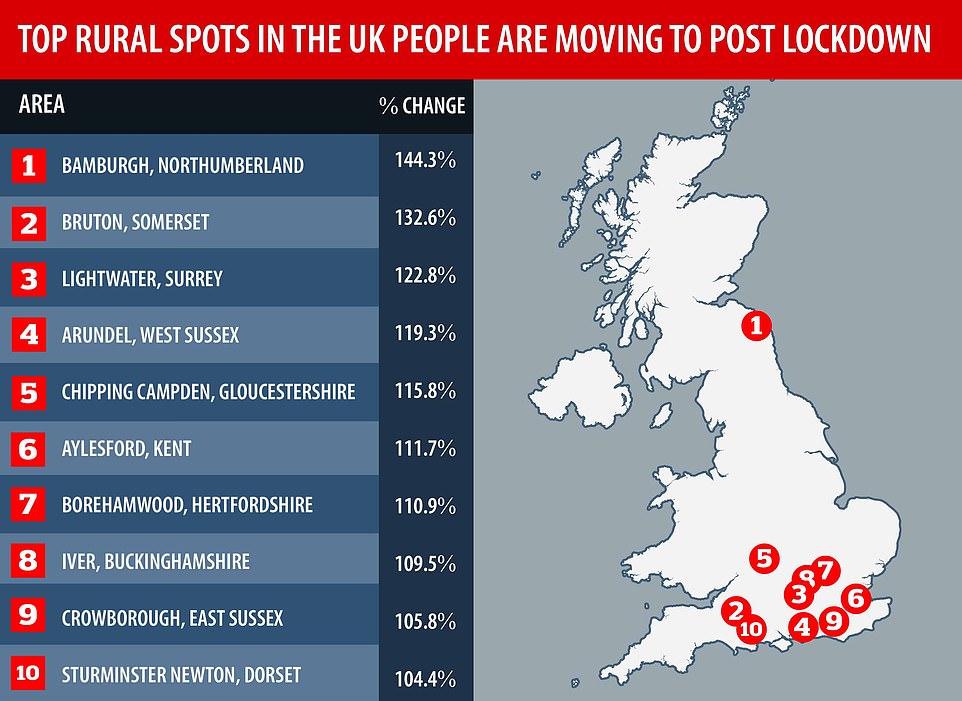 ‘We expect the official measure of prices to peak in October, to around three per cent above its pre-Covid level in March, and then fall by three per cent over the following 12 months.’

A report from Halifax earlier this month said property prices were 5.2% higher than the same month a year earlier and property values were up by 1.6% month on month.

The report said that the price of the average home in Britain had risen to £245,747. 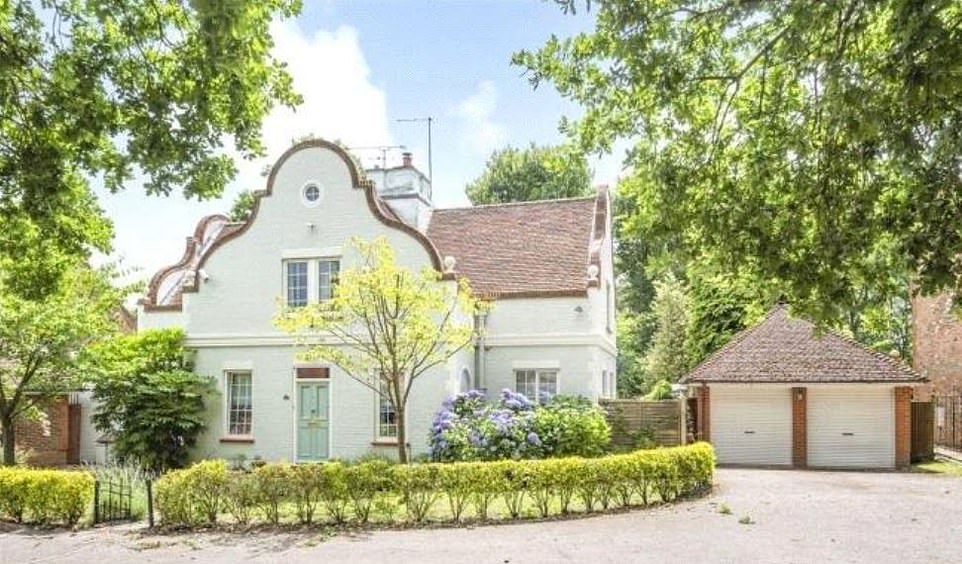 This five bedroom detatched home is one of the properties for sale in the popular spot of Lightwater, Surrey, where estate agents have seen a surge in buyer demand post-lockdown 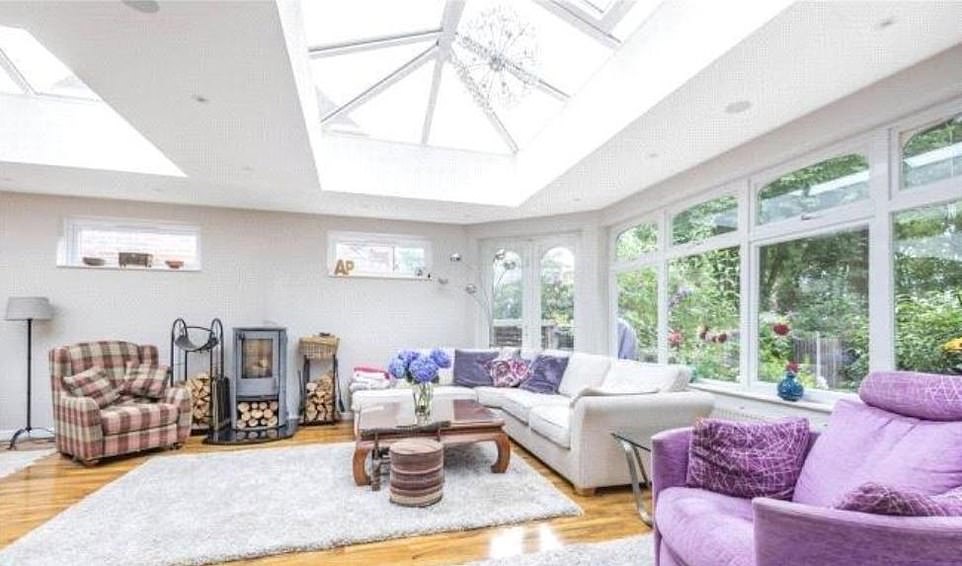 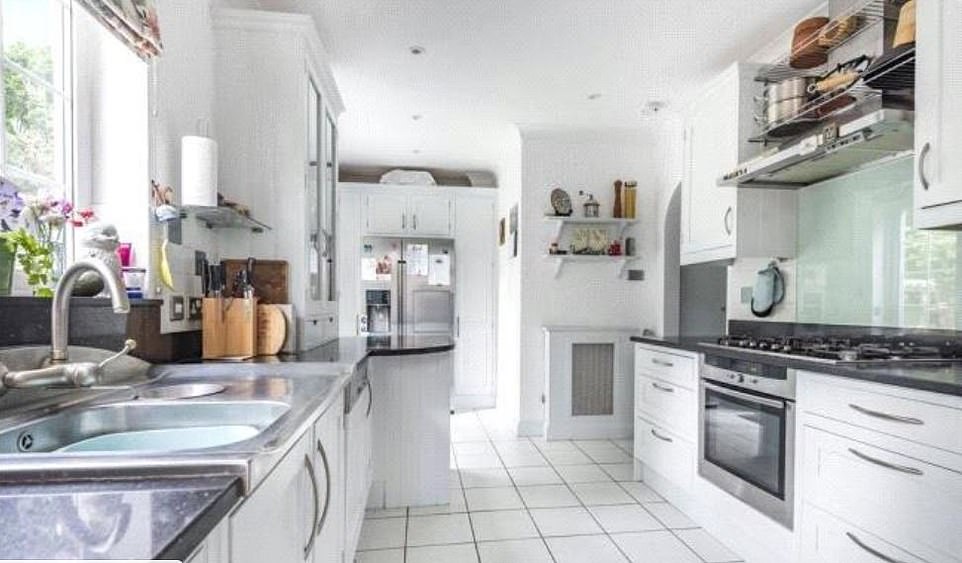 The Rightmove listing on this property says it was originally built in Dutch style, and converted into a family home in 1986 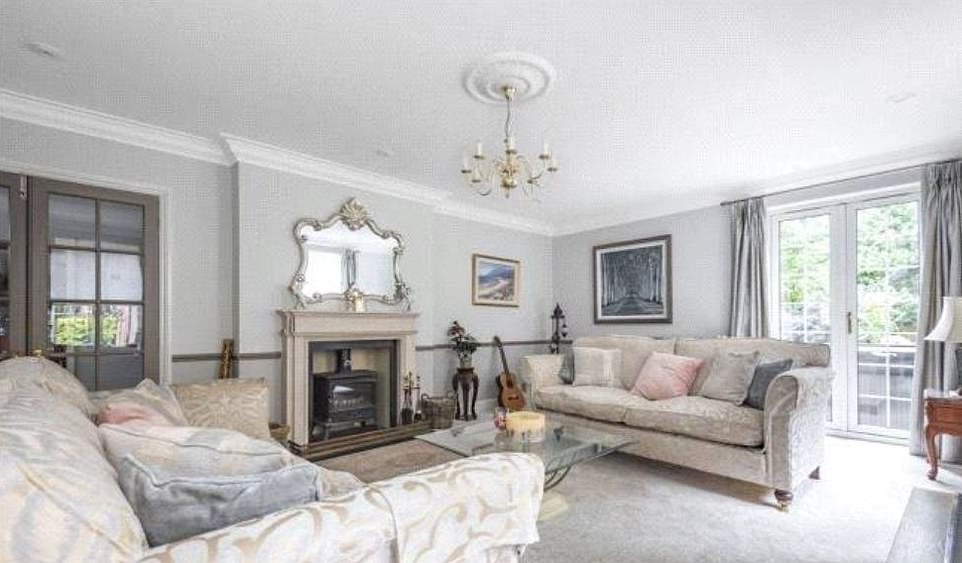 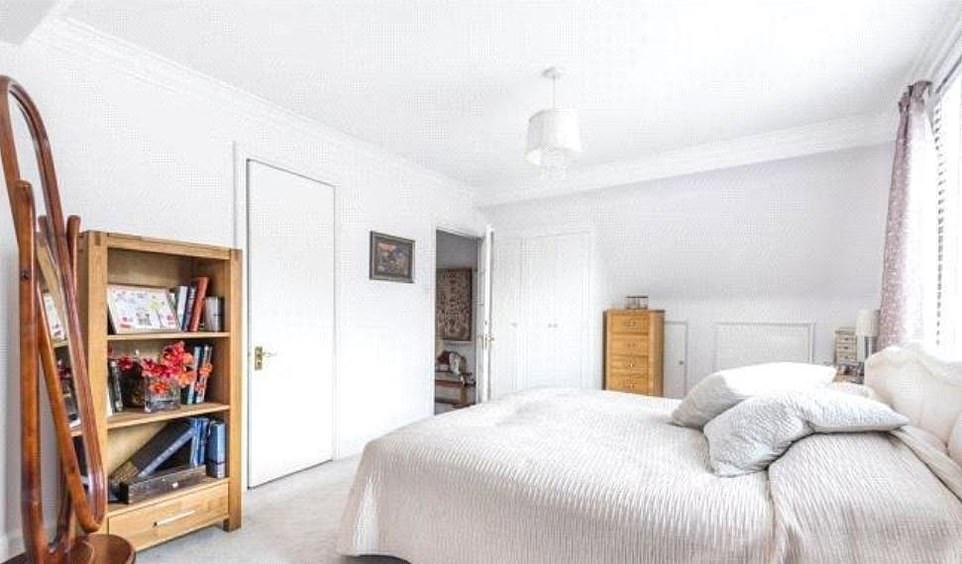 UK house prices hit a record high in early September, but this is set to end in 2021 for a host of factors, including the end of the government furlough scheme, which could affect prices of properties like this one in Surrey

Around one in eight homes that were sold in August also went for more than the original asking price – marking the highest proportion in nearly five years.

Some 13% of properties sold last month went for over their initial price tag, which was the highest proportion recorded by NAEA (National Association of Estate Agents) Propertymark since November 2015.

In July, 8% of properties sold went for above the asking price.

But with prices set to fall by three per cent over the next year from the September highs of £245,747, the drop could wipe off up to £7,350 of an average homeowner’s property value.

Russell Galley, managing director at Halifax, warned in their report that the price of inflation would drop when the impact of the pandemic on the labour market was clear. 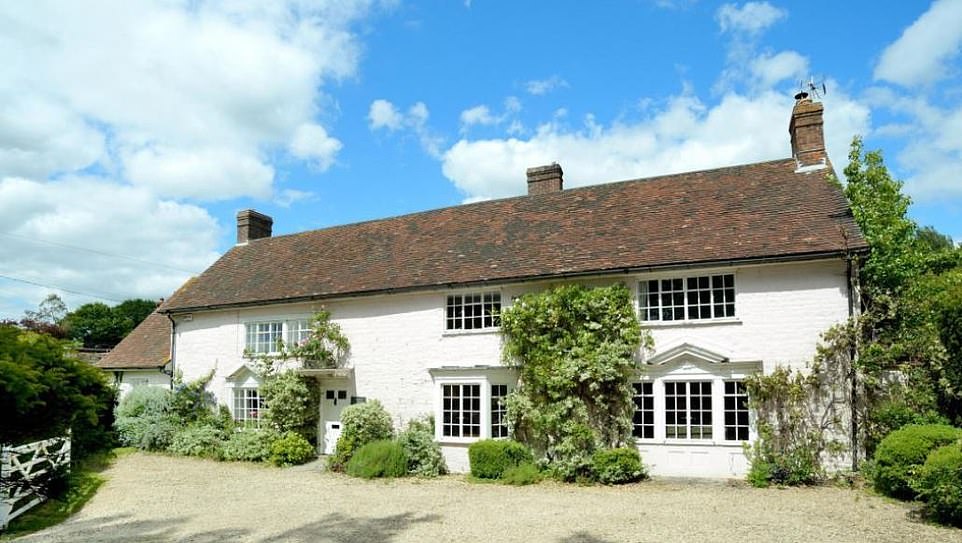 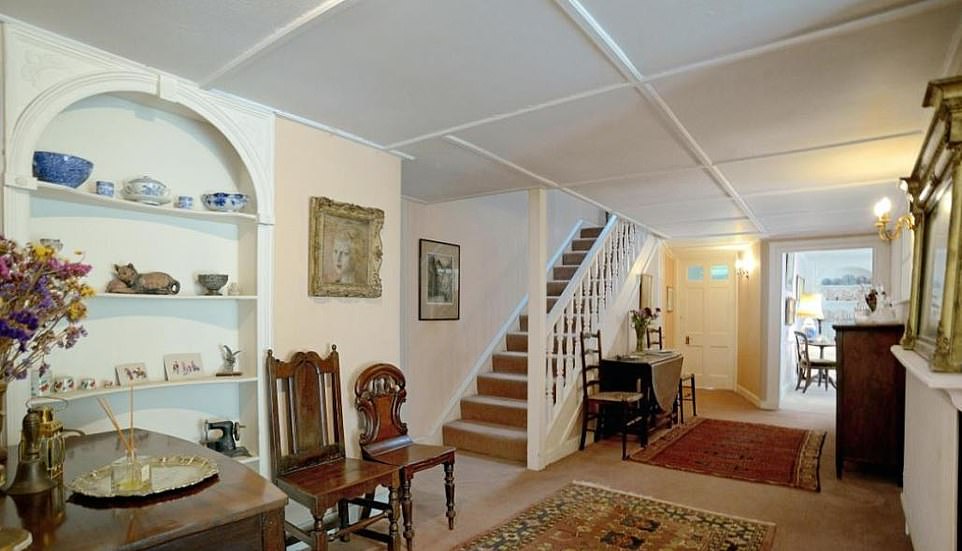 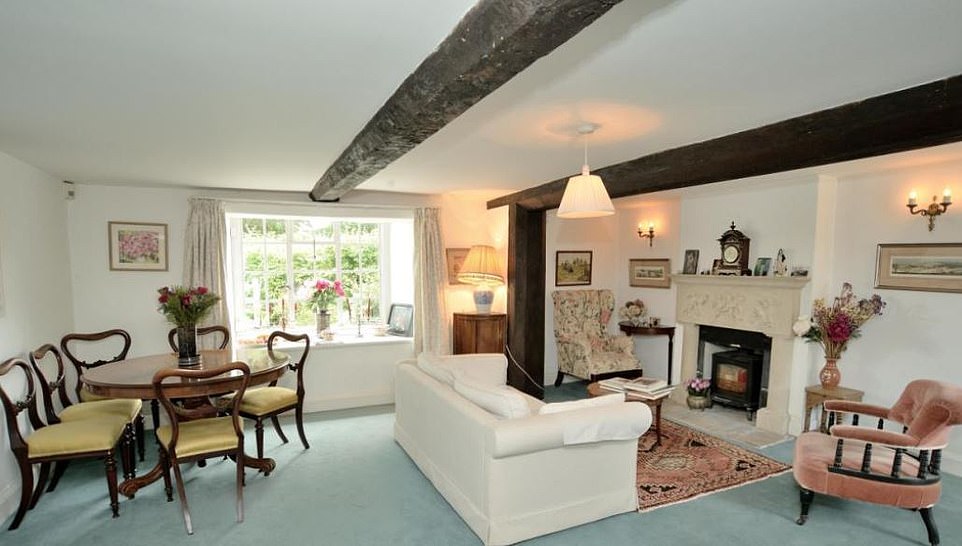 The period home for sale in Dorest is believed to date back to the 16th century and still has original features like exposed beams, pictured here in the property listing 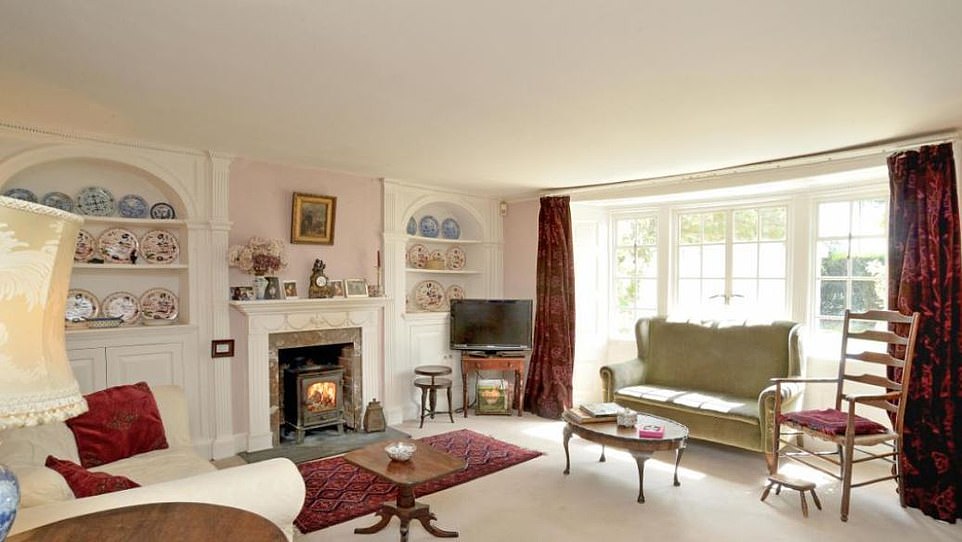 The UK housing market saw robust summer growth, with many properties like this Dorset home being put on the market after the Chancellor’s stamp duty cut, the Bank of England’s ultra-low interest rates and the desire amongst some buyers to move to bigger properties after lockdown 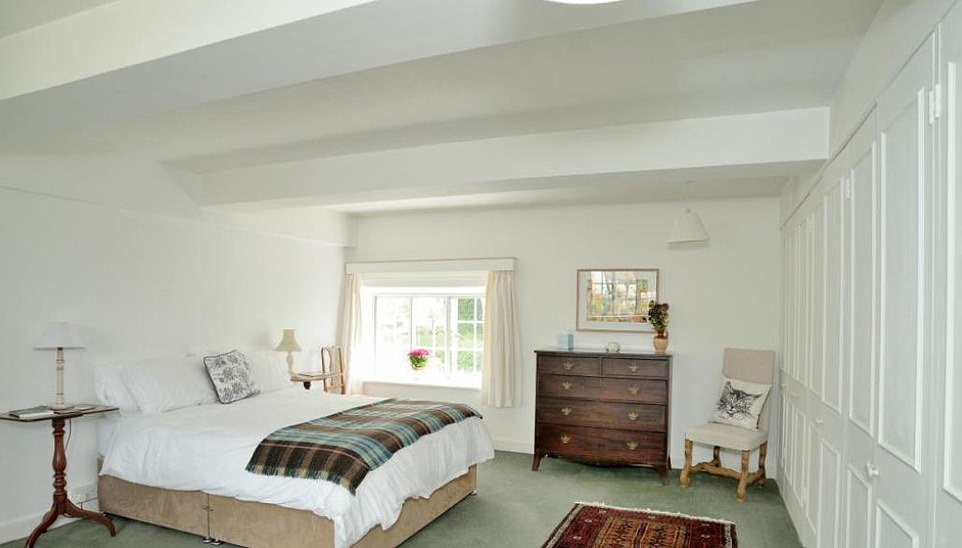 The government’s payment holiday for homeowners struggling to keep up with their mortgage bills ends at the end of next month, so buyers looking to purchase new homes, like this Dorset bolthole, need to be aware

The robust summer growth brought on by the Chancellor’s stamp duty cut for purchases under £500,000, the Bank of England’s ultra-low interest rates and the desire amongst some buyers to move to bigger properties after the lockdown would only go so far.

Mr Galley said: ‘The macroeconomic picture in the UK should become clearer over the next few months as various Government support measures come to an end, and the true scale of the impact of the pandemic on the labour market becomes apparent.

‘Rising house prices contrast with the adverse impact of the pandemic on household earnings and, with most economic commentators believing that unemployment will continue to rise, we do expect greater downward pressure on house prices in the medium term.’

In the meantime, homes are selling much faster than normal, with houses selling faster than flats.

According to estate agent Zoopla, time to sell decreased by 31% across the UK, averaging just 27 days in the period since lockdown, compared to 39 days over the same period in 2019. 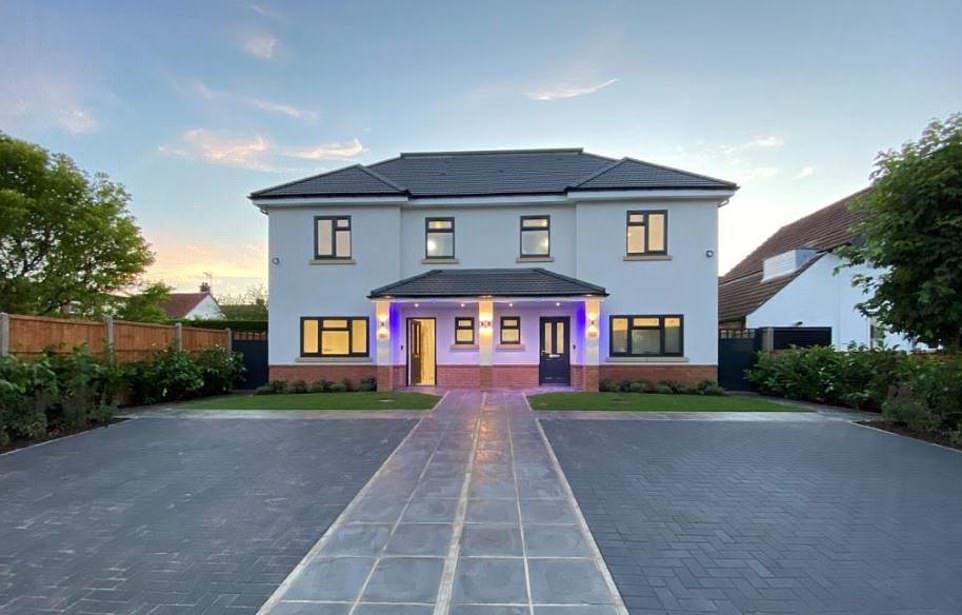 This three bedroom semi-detached house is listed on property website Rightmove as up for sale in Iver, Buckinghamshire. The newly built property is in a popular area where buyers are increasingly looking to move to at the moment

Buyer searches also rose for homes in countryside villages such as Lightwater in Surrey, Sturminster Newton in Dorset and Iver in Buckinhamshire, reported Rightmove, who released a list of the top 10 rural hotspots where they saw an increase in demand.

By comparison, statistics from Online Mortgage Advisor showed that properties in Oxford take an average of 152 days to sell, 51 days longer than average making this the slowest area in the UK.

Surprisingly, houses in London are left on the market for 138 days on average, making it the fifth worst city, while selling houses in Edinburgh sell in average of just 45 days.

The end of the furlough scheme on October 31 is likely to trigger a wave of redundancies and job losses, which is set to bring an end to the housing boom.

And despite further job support measures announced by the Chancellor to replace furlough, the unemployment rate is forecast to rise as high as 12 per cent this year.

The government’s payment holiday for homeowners struggling to keep up with their mortgage bills also ends at the end of next month. 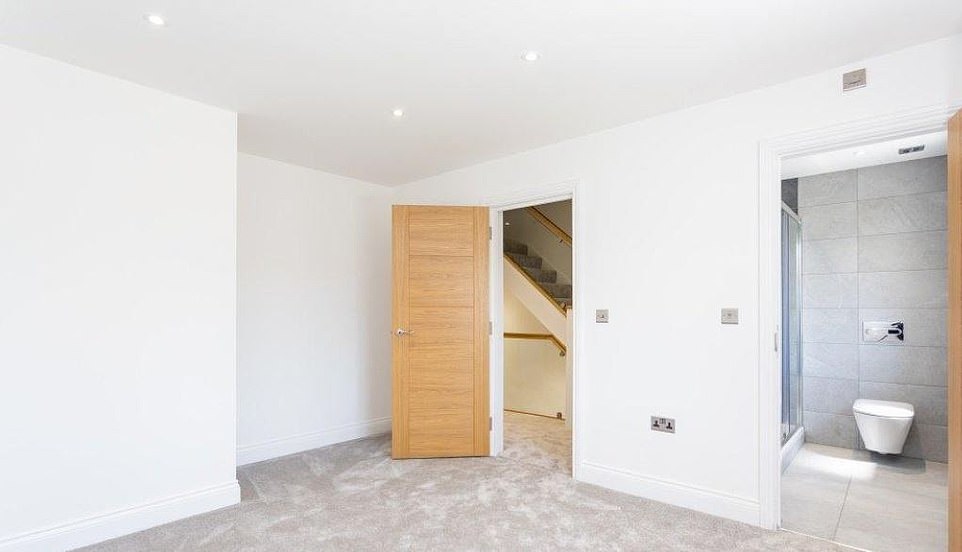 The property is requesting offers in the region of £750,000, but if house prices fall by 3.7 per cent after the post-lockdown housing boom fails, it could be worth £727,500 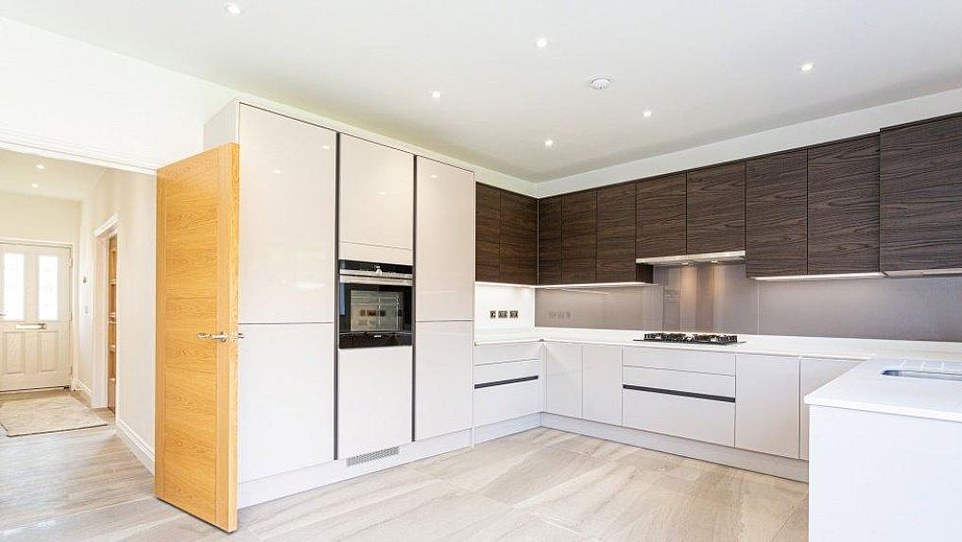 Properties like this one in Iver are looking to benefit from the surge in buyer demand. Around one in eight homes sold in August also went for more than the original asking price, marking the highest proportion in nearly five years 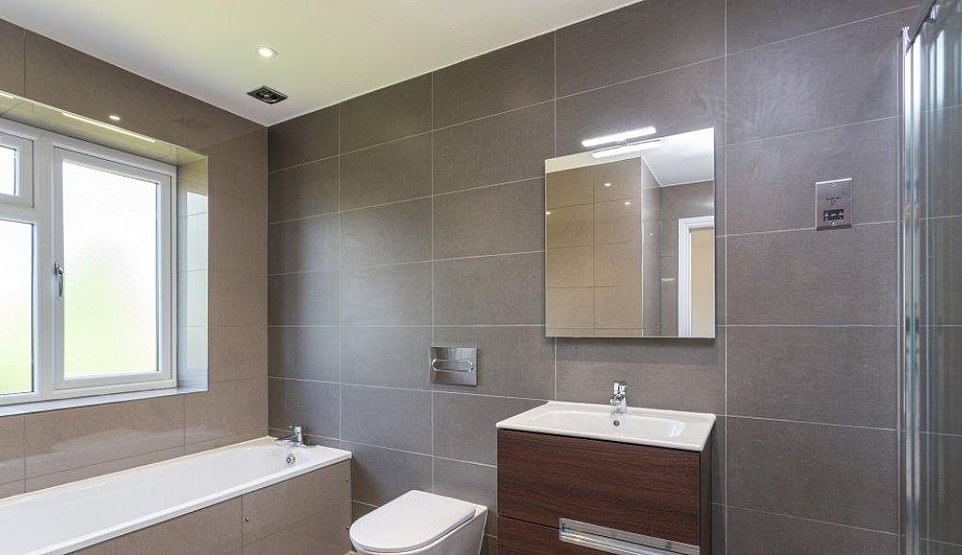 Experts fear that the prices of homes, like this one up for sale in Buckinghamshire, could be badly affected by rising unemployment, with job losses set to soar when the government furlough scheme ends in October

While a further scheme to come to an end in March next year is the stamp duty tax cut that fuelled the lockdown boom when it rose to a threshold of £500,000 from £120,000 previously.

The last time a tax break like this was introduced was in 2008, where the holiday prompted a spike in housing transactions which rapidly fell away when the offer ended.

The same downturn is predicted in 2021 in another blow to the UK housing market.

He told the Financial Times: ‘We’re going to see the bad news ramping up.

‘Redundancies among friends and families — when those things become real for people we’ll see the knock-on impact [on their willingness to buy properties].

‘Then factor Brexit on top. Is that going to start creeping back into people’s thinking?’