The RNLI has taken down its website following a ‘suspected hacking attempt’ after the charity said it experienced ‘suspicious activity’ and staff received threatening emails.

Anyone visiting the charity’s website is being directed to a landing page saying the service is ‘currently unavailable’.

The move came as 100 migrants, including babies and small children, were pulled from the rough seas of the English Channel last night and in the early hours of this morning.

An RNLI spokesperson said on Friday: ‘The RNLI’s website has been the subject of suspicious activity today.

‘As a precaution, the RNLI has taken the decision to take down its website while investigating the activity.

‘We’re sorry for any inconvenience caused and we’re working to resolve the situation as quickly as possible.’

The RNLI said it had reported the ‘threatening emails’ it had received to police. 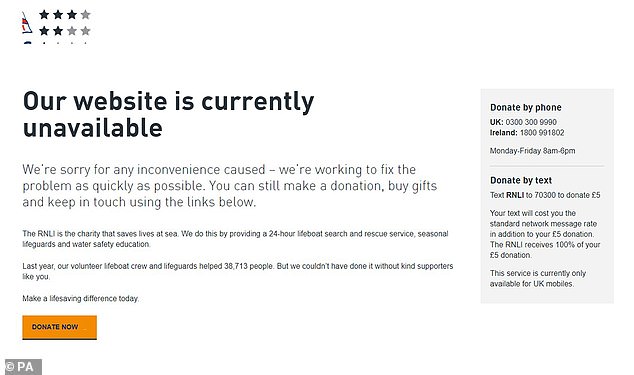 ‘The RNLI has taken the opportunity to remind its staff and volunteers to stay vigilant to keep themselves, their colleagues and RNLI systems safe,’ the spokesperson added.

‘We are focused on our core purpose to save lives at sea and our 24/7 lifesaving service remains fully operational.’

It comes after far-right organisation Britain First encouraged its members to complain to the charity over its rescues of people crossing the English Channel.

However RNLI’s decision to take down its website is not believed to be linked to the email campaign.

The group said online: ‘Britain First has launched a complaints drive aimed at the RNLI to pressure them to abandon their support for illegal immigration and people trafficking and focus instead on saving British lives along our coastal areas.’

A link shared to its Telegram channel purports to allow users to send one of three pre-written messages to RNLI chief executive Mark Dowie.

The group claims more than 3,000 emails have been sent so far.

In response to RNLI’s website being taken down, international refugee law specialist Dan Sohege, director of Stand For All, blasted Britain First on Twitter.

‘Absolute and total support for RNLI and the amazing work they do,’ he wrote.

‘The bottom feeding likes of Britain First, and anyone attacking them for saving asylum seekers, are just the dregs of society.

‘They definitely don’t represent the majority of people.’

It came as dozens of migrants were rescued from the English Channel last night after emergency services were scrambled to respond to calls for help amid treacherous conditions.

Around 100 people including babies and small children are believed to have been pulled from just four dinghies found floating in the busy shipping lane.

Pictures show a Lifeboat vessel pulling in at the Port of Dover with emergency workers helping the woman and children onto dry land. 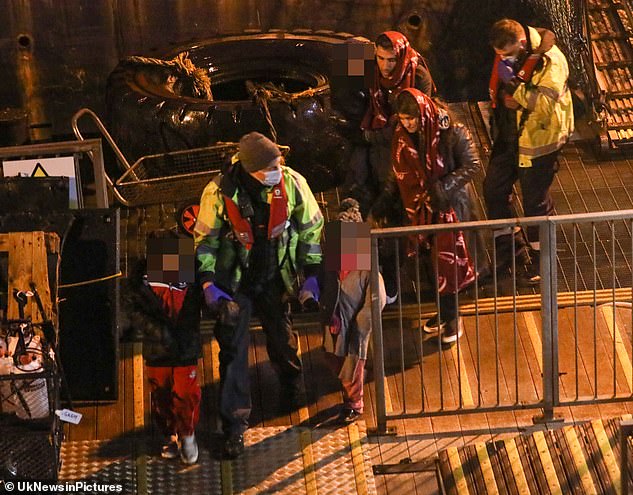 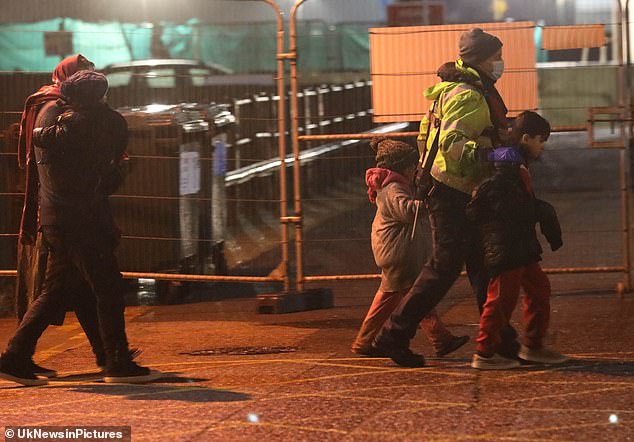 The large number of arrivals comes despite the deaths of 27 people, including a pregnant woman, in the Channel last week after their small boat took on water.

The migrants’ dinghies are understood to have entered the water at the French commune of Gravelines, just south of Dunkirk, in the early hours this morning.

Reports suggest that a Coastguard Spotter plane was called in from Doncaster after being alerted to ‘torches flashes’ coming from boats in the Channel at around 2am.

An RNLI vessel is said to have found around 100 migrants on different vessels in choppy waters. They were taken onboard the lifeboat and brought in to Dover. 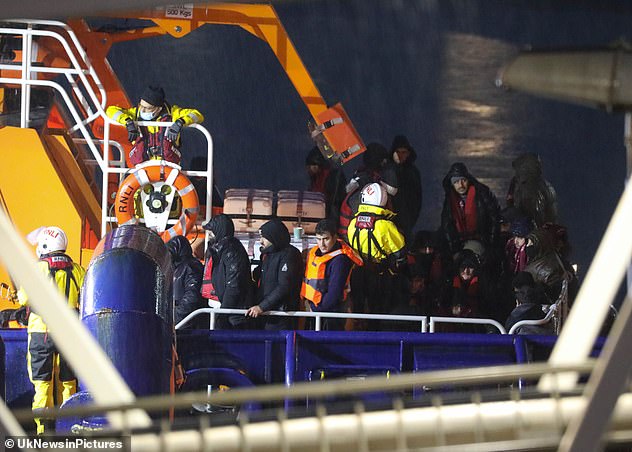 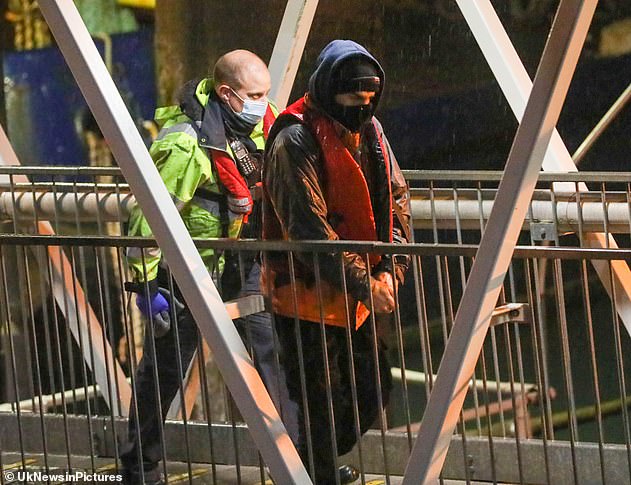 The migrants’ dinghies are understood to have entered the water at the French commune of Gravelines, just south of Dunkirk, in the early hours this morning 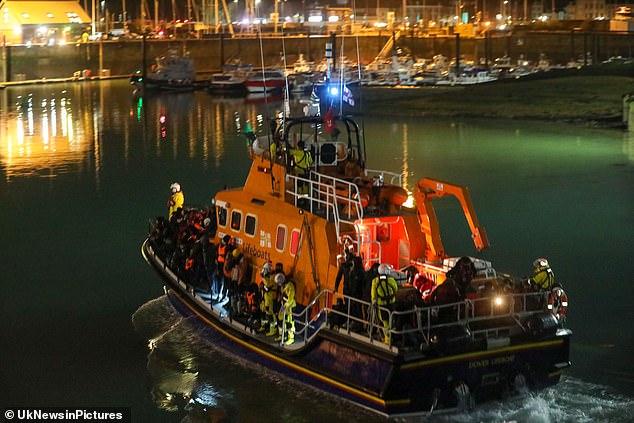 Poor weather conditions this morning have been hampering operations, mostly through fog and a two-metre swirl

Poor weather conditions this morning have been hampering operations, mostly through fog and a two-metre swirl.

It comes after 27 people, including seven women, one of whom was pregnant, and three children, perished when their boat capsized in the Channel on Wednesday.

At least 14 others have died attempting to make the journey this year.

The two sole survivors – an Iraqi and a Somalian – told police their poorly made dinghy was hit by a container ship, puncturing its thin rubber hull.

Five people have been arrested in France over the 27 deaths, including one man held overnight driving a German-registered vehicle packed with inflatable ribs, although there is ‘no provable link’ with the sinking, according to prosecutors, despite French Interior Minister Gerald Darmanin insisting all were ‘directly linked’ to the drownings. 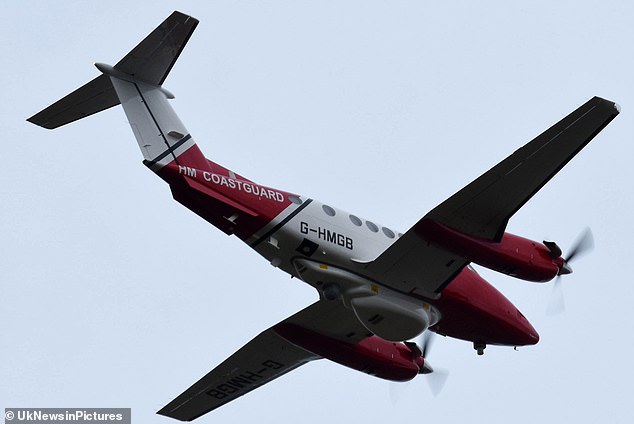 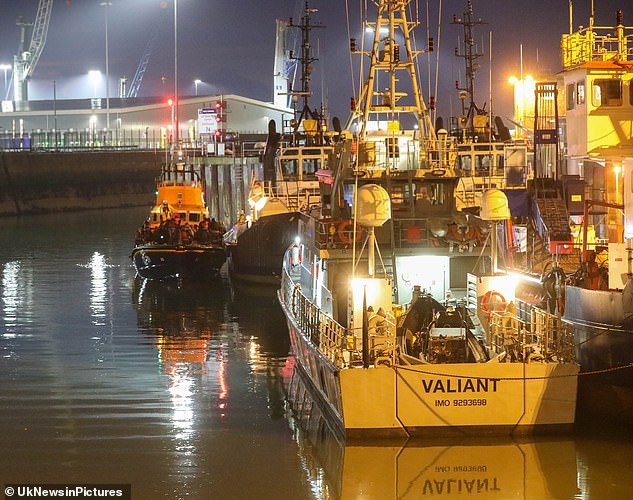 It comes after 27 people, including seven women, one of whom was pregnant, and three children, perished when their boat capsized in the Channel on Wednesday

Those wanting to make their way to the UK are willing to pay thousands of pounds to people smugglers who can buy the vessels for a very small fraction of their takings.

It comes as furious Tories warned Emmanuel Macron’s ‘petulance’ could cost lives in the Channel after the French president lashed out at Boris Johnson and uninvited Priti Patel from a crisis summit.

Mr Macron delivered a furious rant after the PM sent him an open letter demanding action on the migrant flows, branding Mr Johnson ‘not serious’ during a press conference on a visit to Italy.

Meanwhile, a spokesman for the president said the premier’s ‘mediocre’ proposals ‘don’t correspond at all’ with discussions the leaders had on Wednesday.