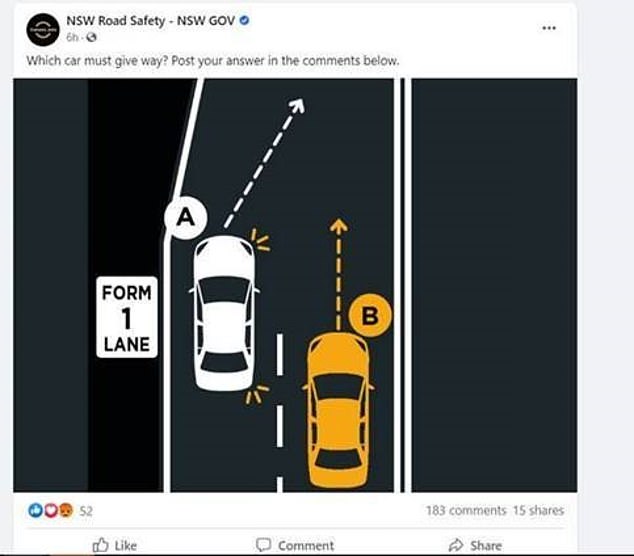 NSW Road Safety took to Facebook with a simple diagram and the question: ‘Which car must give way?’

The graphic showed two vehicles, with car A slightly ahead of car B, having to merge together to form one lane.

More than 180 people debated the baffling question on Sunday. Scroll down for the answer

The two lanes are merging in what is called a ‘zipper merge’, so the car in front (Car A) has right of way.

But some motorists were left confused by the question.

‘Whoever waves at the other driver first?’ wrote one.

Another wrote a long and convoluted piece about what possible circumstances could surround the cars.

‘We have indicators, so the driver of car A must have seen the indicator of the ending of this lane , so he must have taken precaution to change lane earlier. Car B must go ahead as he is on his lane, but if the driver is courtesy he will give car A space to enter in front of him but not necessarily,’ wrote one man.

This immediately provoked a response from people who knew he was wrong.

‘Go back to driving school, A has right of way, it’s always nice to be courteous but the question was who has right of way , so answer is vehicle A,’ wrote a man in response.

‘I have more than 25 yrs driving experience,’ retorted the first man, convinced he was right.

Car B gives way to Car A as the markings for the lane come to an end – making this a ‘zipper merge’ and not a ‘lane change’. The car behind must give way to the car in front

Car A must give way to Car B as the lane marking continues – meaning A is ‘changing lanes’. This confuses many drivers as if the lane markings end first, the car behind gives way instead

One driver who knew the right answer voiced his frustration with bad drivers.

‘Hopefully B,’ he wrote.

‘But these days road rules are a lucky dip with the amount of people getting their licence on eBay.’

Another cracked a joke about annoying Uber riders.

‘Neither A or B cause just out of picture there’s a Uber rider coming up between both of them, causing the rider to squeeze in and get right of way,’ he wrote.

‘Whoever have the biggest ball have the right of way,’ joked another.

Other commonly confused road situations include roundabouts,  giving way to pedestrians when turning, how to use mobile phones to talk or navigate with maps without touching them, keeping left unless overtaking, and the requirement to stop at amber lights.

Own Your Career Own Your Life: Stop Drifting and Take Control of Your Future

Own Your Career Own Your Life: Stop Drifting and Take Control of Your Future