ROBERT HARDMAN: And the real winner on Sunday? Wembley


The calibre of the home team is not the only thing that has lately improved beyond all recognition in this part of the London Borough of Brent.

Compared to the crumbling wastescape which stood here the last time Wembley staged an international football tournament final, this looks like another planet. And I’m not just talking about the stadium.

Even the approach down Olympic Way (Wembley Way as many call it) has been transformed. This is one of Britain’s great avenues, football’s equivalent of the Long Walk at Windsor. And it is now vastly improved – wider, cleaner, smarter.

Instead of those concrete ramps, built in the Seventies, which used to take fans up above the traffic to the stadium entrance, the traffic has been diverted altogether. Supporters arrive at Euro 20 via a vast, gently sloping staircase that only opened last month (with a bank of lifts for the disabled, it is now the largest staircase in Britain). 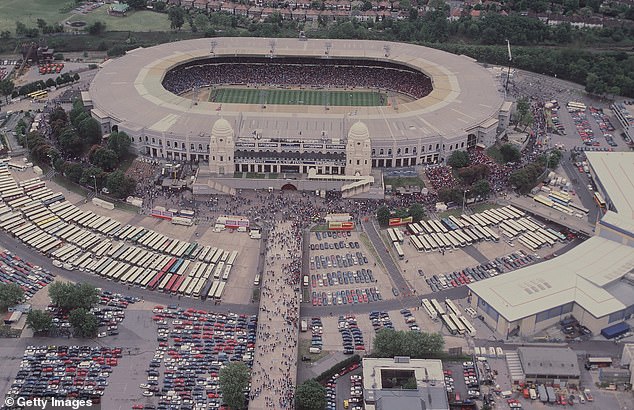 Last time Wembley staged an international football tournament final it was a ‘crumbling wastescape’ (pictured before in 1995), says Robert Hardman

Rewind to the final of Euro 96 (I was there) and the first thing you saw outside Wembley Park station was a run-down public toilet. You then walked past empty industrial units and across a giant car park to the ground.

The only food options were a few burger vans. As for a pre-match drink, it was a half-hour walk to a suburban pub.

And once the match was over, Wembley would revert to what Wembley always was for 99 per cent of the time: A temporary structure built for the British Empire Exhibition in 1924 and surrounded by a sea of tarmac with an unexciting claim to fame. It was Britain’s biggest coach park.

Frankly, for all the dewy-eyed sentimentality about the ‘Twin Towers’, 1966, Live Aid and all that, the place was a dump. So how come it is now, time and again, Europe’s stadium of choice? Why, in a post-Brexit Europe which loves to give Britain the nul-point treatment at every Eurovision, is Wembley the go-to ground when Europe wants to put on a show?

The clue is in the ‘before’ and ‘after’ photos. For make no mistake, Wembley is now UEFA’s favourite European stadium for the really big games (as it will be again three years from now). 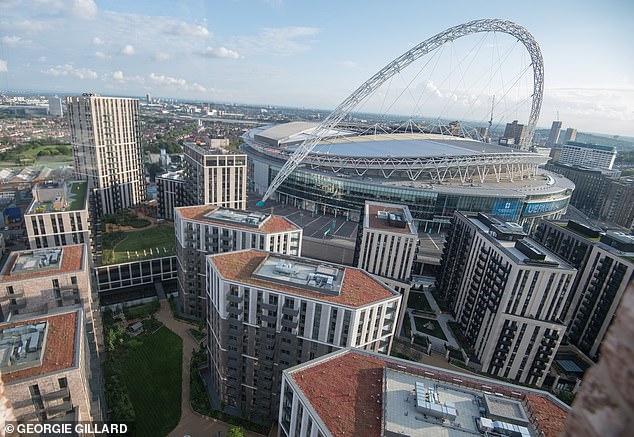 Thanks to Covid, the timetable has been pushed back a year so Wembley will stage the game in 2024 instead. In the meantime, UEFA have also booked it for next year’s women’s Euro 22 Final.

It is not nostalgia that appeals to the corporate mob who run UEFA these days. It is commercial common sense. Wembley is one of Europe’s largest, newest stadia (second only to Barcelona’s Nou Camp in capacity but half a century younger). It has excellent transport connections and it has no resident club (which makes planning a major tournament so much easier).

Because of a series of deals with its neighbours, it also offers total control of the surrounding area in terms of catering, security, parking, hotels, advertising and all the other key considerations that are today’s UEFA priorities.’

The fans are of passing interest. The organisers are much more interested in TV revenues and keeping the sponsors happy, which means access to all the hospitality boxes and suites for the ‘UEFA family’. They certainly do not want to see any ‘ambush marketing’ by rival brands on the surrounding streets.

The International Olympic Committee makes this a precondition of hosting the Olympic Games. It is harder to impose at a football match – but it’s no problem at Wembley. Chuck in the fact that UEFA executives, their sponsors and (crucially) their spouses actually enjoy coming to London and it all adds up to a key strand of the UK’s next big sporting ambition: hosting the 2030 World Cup. The bidding process is still in the early stages but it is boiling down to a battle between North Africa (Morocco and its neighbours), Iberia (a joint Spanish-Portuguese affair), the Balkans, and the British Isles (UK plus Ireland).

FIFA, the governing body of world football, will be paying close attention tomorrow night. This final has big implications far beyond the state of the nation’s mood on Monday morning and Gareth Southgate’s knighthood prospects.

When the FIFA inspection teams come to look at Wembley, they won’t give two hoots about the result of Euro 20. They will be more interested to find that the old Wembley estate now houses a designer outlet centre full of top brands (I find a queue around the block – leading to Nike) plus 40 new restaurants ranging from Pizza Express and Nandos, to artisan bakery Bread Ahead.

Try as I might, I can’t find a KFC and the nearest McDonald’s is half a mile away. Right next to the ground, though, is Britain’s newest pub. Called The White Horse (after Billie, the police horse who famously restored order at the 1923 Cup Final), it is actually a two-storey gastro-pub.

Another new arrival, which will take up residence when its HQ is completed soon, is the Royal Philharmonic Orchestra.

Perhaps the most incongruous addition to the Wembley landscape, though, is a pink, floral-themed, alcohol-free luxury waffle shop and patisserie called Haute Dolci. Fancy an éclair before the big game?

The biggest change since Euro 96, though, is the 3,000 homes that have gone up on the old coach park and car parks. Another 4,000 are on the way, nearly all of them apartments. Not only do they all have balconies, but none is for sale. They are all for rent at a range of prices, aimed at young professionals, families and keyworkers who have had enough of crammed inner city digs. I notice none has any cladding.

‘We try to use traditional brickwork everywhere,’ explains James Saunders, chief executive of landlords, Quintain Living. ‘It looks better, feels timeless and has more of a village feel.’

He takes me to the communal terrace on top of one block. It is a 26th-floor garden with hanging chairs, barbecue areas, sun loungers and views across to the Chilterns, the City and the Surrey hills. You can even see inside part of the stadium from here (though not the goals). With rents starting at around £400-a week for a one-bedroom flat, you don’t need to be a footballer to live here.

Above all, Wembley and its precincts now have what they never had in the old days: Life. Street theatre is actively encouraged. In a couple of weeks, these pedestrian-only precincts will stage the International Busking Festival. Walking down Olympic Way on a non-football evening this week, I find plenty of punters going in to BOXPARK, a huge sports-bar-cum-nightclub with 30 different food outlets and an indoor golf range. I chat to James, Hamza and Jay enjoying a drink and a pizza. All are 22 and newly graduated and they all grew up in the streets round here (just like Raheem Sterling). All say the area has changed beyond recognition.

‘This place had nothing when we were kids,’ says James. ‘It felt like a building site. Now look at it – 100 per cent different.’

It is indeed. So what still remains from that buzzing summer of Euro 96? Just two things. The old Grade II-listed indoor music venue at Wembley Arena is still in one piece, albeit completely different within.

And then there is the hit we sang that summer as ‘Three Lions’ shot to No 1. As the old song goes: ‘I know that was then. But it could be again…’

PROFESSOR ROBERT TOMBS: The daftest lecture in wokery yet