Robot and 14 surgeons work on a single cancer patient


A robot and three teams of surgeons worked simultaneously on a single patient to perform what is thought to be a first-of-its-kind cancer operation, slashing recovery time by a third.

The astonishing procedure, involving 14 surgeons, was carried out in July on a married father-of-one with advanced rectal cancer.

The experts behind it hope the breakthrough will throw open the doors for further operations involving more than one surgeon working at the same time.

About 43,000 Britons are diagnosed with bowel cancer each year. The majority of cases occur in the rectum.

Symptoms include changes in bowel patterns and bleeding, and more than 50 per cent of cases are diagnosed at a late stage when extensive surgery may be required. 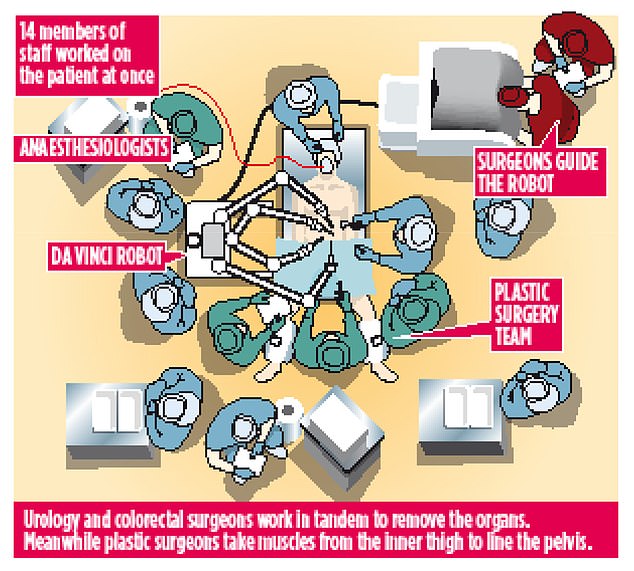 The astonishing procedure, involving 14 surgeons, was carried out in July on a married father-of-one with advanced rectal cancer. Pictured: An illustration of the procedure

An example of the type of surgery that may be needed is pelvic extenteration, in which the organs in the pelvic region, including the bladder, rectum, prostate and part of the kidney, are removed to stop the disease spreading.

It requires the expertise of at least three surgical teams, and the patient is left with colostomy and urinary bags for life.

Until now the operation has been done in shifts. One team follows the other, with a bowel doctor going in first, followed by a prostate specialist and finally plastic surgeons to repair the damage.

But doctors at Norfolk and Norwich University Hospital took the decision to do all three stages simultaneously with a £1 million Da Vinci Si robot.

The procedure took less than ten hours, compared to the 12 hours required when done step by step.

But the greatest success of the operation was the recovery time. Pelvic extenteration patients typically spend three weeks in hospital – this patient was there for just seven days.

Colorectal surgeon Irshad Shaikh said the idea started as ‘just a thought’ but quickly became a concrete plan when he discussed with his colleagues the potential advantages. 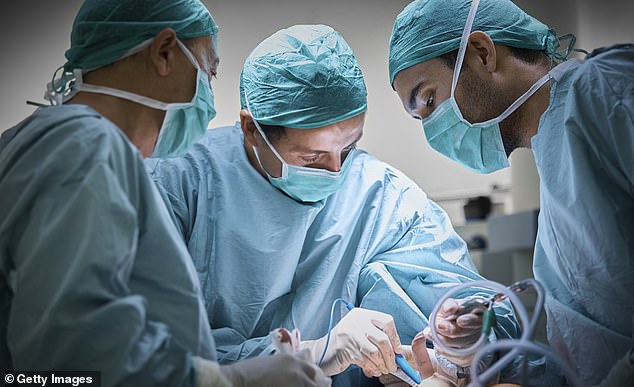 The experts behind it hope the breakthrough will throw open the doors for further operations involving more than one surgeon working at the same time. Pictured: Stock image

He says: ‘Pelvic extenterations are extremely traumatic because so much tissue has to be removed. Working together, we realised we could make the procedure less invasive and so could reduce tissue trauma significantly and blood loss.’

The patient, Peter Fabb, 53, from Heveningham, Suffolk, is thought to be the first person in the world to have the operation done like this. He was relieved to get out of the hospital so quickly and is now recovering with his family at home.

He said: ‘I’m still getting back on my feet, but the other day I managed a one-mile walk with the dog, which felt like an achievement.’

Peter was diagnosed with colon cancer in November after suffering discomfort and lower-back spasms while driving.

A beer delivery driver, he began to feel uncomfortable sitting in his truck as he did his rounds.

He was at first given antibiotics because his GP believed he had a prostate infection but when the pain didn’t go away he went for a scan, and that revealed cancer had spread from his rectum and into his prostate.

He was recommended for the surgery after chemotherapy failed to have the desired impact.

Mr Shaikh felt he would be the perfect candidate to trial the new ‘tandem’ pelvic extenteration.

In the past, pelvic extenterations have been an open surgery, where the pelvis area is cut open. Mr Shaikh and prostate surgeon Omar Al Kadhi performed the procedure through keyhole incisions with the helping hands of the Da Vinci Si.

Surgical instruments are attached to the robot’s four arms, each of which has fully rotating wrists. The arms are controlled by the surgeon, sitting at a console with two joysticks and a 3D screen.

In the weeks before, the teams at Norfolk and Norwich carried out a dress rehearsal – mapping out everyone’s positions in theatre.

Peter arrived the morning of the procedure and was in the operating room, under general anaesthetic, less than an hour later. Throughout the ten-hour operation, Mr Sheikh and Mr Al Kadhi would take turns controlling the robot.

First, the colon and most of the rectum were removed, followed by the bladder and prostate.

At the same time, plastic surgeons Anais Rosich-Medina and Richard Haywood took muscles from Peter’s inner thighs, which were transplanted into the pelvis to provide support once the organs had been removed.

Finally, Peter’s colostomy and urinary bags were attached, via stomas (ports) in his mid-abdomen.

Mr Shaikh said the team had to be careful of the robot’s arms, which are capable of knocking people off their feet, but he said the operation went very smoothly thanks to ‘fantastic teamwork’.

Returning home seven days later, Peter says he was surprised at how small the scars were considering the size of the procedure – and he is now cancer-free.

I’m about to have a child and turn 50 – should I get life insurance now before it’s too expensive?