Just a few months ago, James Franklin was struggling to do everyday tasks because of constant pain in both of his hips.

The pain that had built up over five years had become so severe that getting up from his office chair, or carrying shopping, would leave him wincing with agony. Even what should have been a ten-minute stroll to the supermarket took half an hour, and over-the-counter painkillers had little effect.

‘It got to the stage where the pain was 24/7,’ says James, 60, who works in telecommunications and lives in Newton Aycliffe, County Durham, with his wife Sharon. ‘At night, I could feel the pain as I lay still in bed. I could never get comfortable and it was getting me down.’ 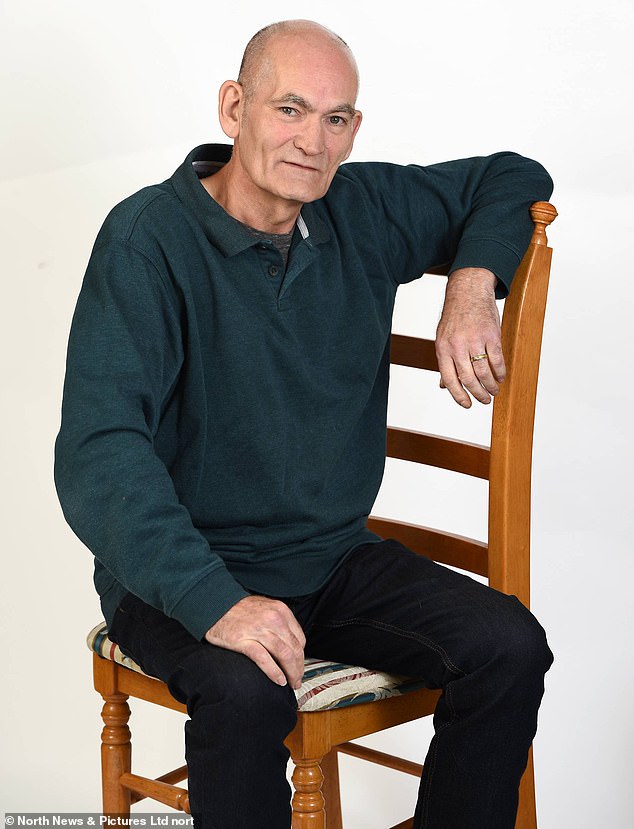 James Franklin, 60, from County Durham, was struggling to do everyday tasks

Like 2.4 million people in England, James had osteoarthritis in his hips, where the spongy cartilage covering the joints becomes damaged and leads to pain, swelling and difficulty moving, and he was told both hips needed replacing.

Now following two hip replacements, James’s agony is becoming a distant memory. But what is more remarkable is that James was up walking and ready to be discharged just five-and-a-half hours after arriving at the hospital — all thanks to his surgery being carried out, in part at least, by a robot.

According to James Webb, a consultant orthopaedic surgeon who carried out the operations on James’s hips, this high-tech technique — where surgery is guided by a robotic arm — is a ‘game changer’ for not just hip, but knee replacements, too. 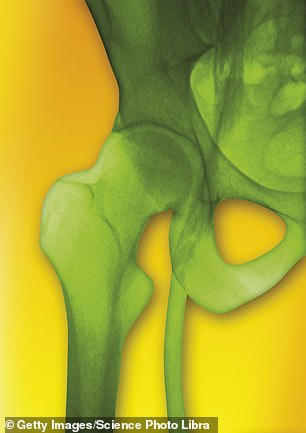 Like 2.4m people in England, James had very painful osteoarthritis in his hips (stock image)

‘When I started my surgical training in the Nineties, it was usual for a hip replacement patient to be in bed for days and stay in hospital for a week or more,’ says Mr Webb, who works at Tees Valley Hospital in Middlesbrough and BMI Woodlands Hospital in Darlington. ‘Then there were six to eight weeks of at-home recovery, plus physiotherapy to get full movement back again.

‘Now, with robotic assistance, the operation is much more accurate and refined, so patients can be walking in about two hours and back home soon after on the same day. They can even be driving within a week and resume their active, normal lives. It’s a game changer for patients.’

For some years, surgical robots have been used to carry out cardiac, gastrointestinal and gynaecological operations, as well as in prostate and bladder cancers.

The approach is not without controversy and risks, not least because they require highly specialised training for the surgeon and can be prone to electrical faults.

In 2015, a 69-year-old man died while having a heart operation, where a surgeon was using a robot, called Da Vinci, to repair a valve. It led to a suspension of cardiac surgery at the Freeman Hospital in Newcastle.

The use of robotic assistance in joint-replacement surgery is a relatively new innovation.

Traditionally, an arthritic hip is treated with painkillers and anti-inflammatories, followed by physiotherapy to mobilise the stiff joint, and possibly a steroid injection.

Surgery is an option in severe cases, where the damaged joint is removed and replaced with an artificial one. Each year, more than 100,000 patients have their hip replaced in the UK. It takes away pain in 85 per cent of cases and lasts at least 15 years.

However, if the fit of the artificial joint is even slightly off, it can lead to patients having legs of different lengths, poor muscle function, or a joint that easily dislocates.

James was offered the chance to have both hips replaced using the Stryker Mako robot, a device about the size of a small fridge, which has a mechanical arm attached to it that guides the surgeon during the procedure.

As the £1 million technology is relatively new, just a few NHS hospitals — in Birmingham, Exeter and Portsmouth — are using it, along with around a dozen private hospitals across the country. The robot is used both before and during the operation, which costs £13,500 privately for each hip.

Before the procedure, a CT scan is taken of the hip, which the Mako software uses to build a detailed, 3D model of the joint and surrounding area. This shows the surgeon how much bone to remove, the cuts to make into the damaged joint, the size of the implant to use and precisely where it should be placed (although the same type of implant is used as with conventional surgery).

The data is then uploaded to a computer which guides the robotic arm during surgery.

The idea is that it means the implant will fit perfectly, with less of the healthy tissue and bone being damaged during the operation, which can often occur in traditional surgery.

James used his work medical insurance to have the operations done privately.

He had his right hip replaced in March, and the left in September — both with the Mako robot. It was the promise of a rapid recovery which appealed to him.

The procedure starts with the surgeon making a 10 cm vertical incision (smaller than with traditional surgery) in the side of the hip. The hip joint is dislocated and the femoral head, the ball part of the ball-and-socket joint, is removed from the socket and cut off with a saw on the robot’s arm, with any remaining cartilage inside the socket cleared away by the robot, too.

Information about the procedure is displayed on a screen throughout, allowing the surgeon to check the robot is cutting the bone as planned. The new implant is then guided into place by the robot, making sure it is correctly aligned.

‘Traditionally it would be a surgeon’s experience and expertise that would decide where to make the cuts when carrying out this surgery and which size implant to use,’ says Mr Webb.

‘But with this approach all the cuts are already worked out and programmed into the robot’s arm. Each cut will be within 1 mm of accuracy and it is programmed to stop instantly if it veers away by only a fraction.’

Despite the robot doing the work, the surgeon remains in control of the procedure the whole time, he says. ‘I still make the incision and expose the joint, but use the robot as a precise tool to prepare the bone and align the correct implant,’ says Mr Webb.

MEMBERS of the public are almost as good as trained pathologists at identifying breast cancer cells, suggests an online research project called Cell Slider by the charity Cancer Research UK.

The two-year project, launched in 2012, asked almost 100,000 members of the public or ‘citizen scientists’ to analyse 180,000 images to look for breast cancer cells.

Each underwent online training before. The study was set up to see whether the public could be reliably used in medical research, to free the time of pathologists who analyse samples to diagnose disease. The slides used in the study were from breast cancer patients who had already been treated. When the results were checked against 3,000 samples that had been previously analysed by a pathologist, the public were found to give the same answer in nine out of ten cases.

Paul Pharoah, a professor of cancer epidemiology at the University of Cambridge and senior author on the study, published in the journal EBioMedicine in 2015, said: ‘The availability of citizen scientists ought to make it possible to do research on a much larger scale. The results from this study were very promising.’

‘All hip replacement surgery carries the risk of infection, bleeding, blood clots, dislocation of the new joint and a leg length difference —but the Mako aims to reduce these as the procedure is more precise — in particular, the risks of dislocation and difference in leg length.’

Research, including a study of 80 patients published in The Bone and Joint Journal in 2018, shows patients who have this robot surgery suffer less post-operative pain and have a much faster recovery — usually about two weeks compared to six with the conventional method. Most patients are out of hospital within 24 hours, instead of three or four nights.

However, whether a total hip replacement using a robot will last longer than the traditional method is not yet known.

‘If it [joints via robotic surgery] does last longer, it may be more suited to younger patients, who tend to be more active,’ says Professor John Skinner, a consultant orthopaedic surgeon at the Royal National Orthopaedic Hospital in Stanmore.

James had his operations with a spinal anaesthetic, which numbs the body from the naval down.

While James had some pain and soreness in the days after the operation, he is keeping active to avoid the joint becoming stiff.

The first hip took about three months to feel completely pain-free after surgery and he expects the same will happen with the left one, too.

‘For the first time in years I don’t worry about my hips and everything being a struggle,’ he says.