Robotics: World’s smallest origami BIRD created that is 20 times smaller than a grain of sand

The world’s smallest origami bird — which is just 60 microns wide, or 20 times smaller than a single grain of sand — has been created by researchers from the US.

Made from sheets only some 30 atoms thick, the robots are made of so-called ‘shape memory actuators’ which fold and stay folded when an electric jolt is applied.

The team hope their self-folding origami bird will be recognised by Guinness World Records. The team already have the record for the world’s smallest walking robot.

‘We want to have robots that are microscopic but have brains on board,’ said paper author and physicist Itai Cohen of New York’s Cornell University.

‘So that means you need to have appendages that are driven by complementary metal-oxide-semiconductor (CMOS) transistors, basically a computer chip on a robot that’s 100 microns on a side,’ he added.

‘Imagine a million fabricated microscopic robots releasing from a wafer that fold themselves into shape, crawl free, and go about their tasks, even assembling into more complicated structures. That’s the vision.

‘The hard part is making the materials that respond to the CMOS circuits.

‘And this is what [first author and microroboticist Qingkun Liu] and his colleagues have done with this shape memory actuator that you can drive with voltage and make it hold a bent shape.’ 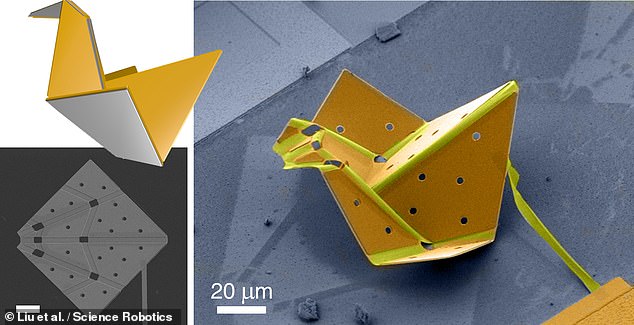 The world’s smallest origami bird — which is just 60 microns wide, or 20 times smaller than a single grain of sand — has been created by researchers from the US. Pictured: the tiny origami robot (left) is able to fold from a flat sheet (bottom right) into a bird shape (top right)

The folding bird is the latest in an array of nanoscale machines and components that the team have created, with the robots getting steadily faster and more elegant.

Each requires  just a single volt of of electricity to be brought to life, fold up within 100 milliseconds and can be unfurled and reshaped thousands of times before they begin to wear out.

The team is presently working to integrate their shape memory actuators with circuits — which would potentially allow them to make walking robots with foldable legs, as well as sheet-like robots that move by undulating like a worm.

In the future, the team said, these innovation may lead to researchers being able to create nanoscopic bots than clean bacterial infections from human tissue and robotic surgical instruments that are ten times smaller than current devices.

They may even pave the way to micro-factories — tiny versions of the kind of robots we presently use to build cars on the production line — that completely revolutionise manufacturing processes.

The full findings of the study were published in the journal Science Robotics.

THE ANCIENT ART OF ORIGAMI 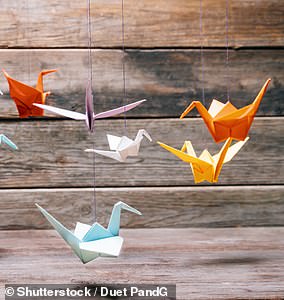 Origami is the art of paper folding, which is typically associated with Japanese culture.

In Japan, origami is believed to have begun sometime in the 6th Century, after Buddhist monks from China brought paper to the island.

The monks records indicate that their paper folding (or ‘Zhezhi’) was practiced as early as 200 AD.

Origami typically involves the folding and sculpting of a square sheet of paper — which may feature different colours or patterns on each face — into a three-dimensional pattern, such as the classic paper crane.

Modern origami discourages the cutting, gluing or marking of paper. In Japan, designs that require cuts are referred to as ‘kirigami’.

WHO advises against vaccine passports as EU debates ‘green pass’

WHO advises against vaccine passports as EU debates 'green pass'