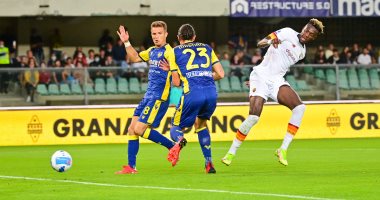 The Italian team, Roma, suffered its first defeat, under the leadership of Portuguese coach Jose Mourinho, after falling 3-2 away to its host Hellas Verona, in the exciting confrontation that took place between them on Sunday evening, at the “Marc Antonio Bentegodi” stadium, in the fourth round of competitions. The age of the Italian League competition for the current season 2021-2022.

The first half ended with Roma advancing with a goal scored by Lorenzo Pellegrini in the 36th minute of the match, and in the second half Hellas Verona scored two consecutive goals signed by Antonin Barak and Gianluca Capari in the 49th and 54th minutes, before Ivan Ilic scored Roma’s second goal by owning an own goal in the 58th minute. the match.

Marco Davidi scored the third goal and won for Hellas Verona in the 63rd minute of the match.

With this result, Rome’s balance is stuck at 9 points in fourth place in the Italian league table, while Hellas Verona raised its score to 3 points to advance to the 14th place, where it achieved its first victory in the competition this season.

For his part, Jose Mourinho, coach of the Italian club Roma, confirmed that the players did not perform well during the confrontation with Hellas Verona.

Mourinho said, in his statements after the match: “We did not play well, I will return to evaluate the match via video later. We had difficulty playing and exaggerated the long balls.”

Mourinho added: “We had difficulty controlling and building in the midfield, we need to manage the difficult times better.”

The Roma coach concluded his statements by saying: “There were a lot of individual matches that we lost, when there is a change, there is usually a mental and emotional reaction.”