Ronaldo: I want to make history with Manchester United and differ from the rest of the players 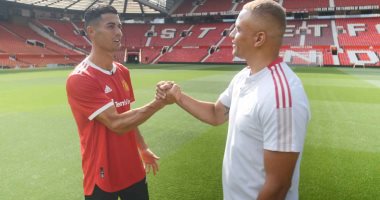 The Portuguese star confirmed Cristiano Ronaldo He is looking forward to making a new history with Manchester United, after he joined his ranks during the summer transfer season, noting that his advancing age does not at all reduce his effort on the field, explaining that he differs from the rest in this part.

Ronaldo is preparing for his first appearance with Manchester United, during the confrontation with Newcastle United, which is scheduled for tomorrow, Saturday, in the fourth round of the English Premier League..

Ronaldo said in an interview with Wes Brown on the Manchester United channel: “I am very happy, very happy to return to Man United, I never thought I would come back again but I am very proud, I am very excited and looking forward to starting in the best way, I am happy and my family is happy My kids are happy too, everyone is happy in Manchester.”

“We have good memories at Manchester United, but this is a new time, a new generation and I’m here to win again,” Don continued.

Ronaldo continued, “The new players and the young players, I think they have great potential, I am here again to win and to make history with them.”

And about his age, Ronaldo said: “Everyone always talks about age, but they should know that I am different from the rest, I am good all the time from year to year and this year will be the same.”

And about his beginnings with Manchester United in the first period, Ronaldo said: “I did not expect to start or even play in 2003, so I was very nervous, of course I will be nervous on Saturday but I am more mature and more experienced, and I will be ready and I will press Solskjaer to start (laughs).” .

He continued, “It is a great feeling, I know that people here are different. Since I set foot on the airport grounds on my first day, I feel the feelings of people towards me, and this is not because I am a Manchester United player, but because they have seen me older since I was 18 with my passion and everything like that, I I feel great love with strong desire.”

YAY Games (YAY) registers a 55% rise in 24 hours: here are the best places to buy it