Ronaldo scores in 36 teams in the Champions League equally with Messi.. Video 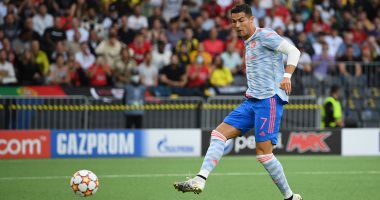 Portuguese star Cristiano Ronaldo scored his first goal in the European Champions League after returning to the ranks of the English team Manchester United, during the last summer transfer market, against its host, Young Boys of Switzerland, which brings the two teams currently in the first round of Group F in the group stage of the competition. .

The “Opta” network, which specializes in monitoring statistics, stated that Young Boys, the 36th team that has scored against Portuguese star Ronaldo in the Champions League, equals the record registered in the name of Argentine star Lionel Messi, player of Paris Saint-Germain.

Portuguese star Cristiano Ronaldo scored the first goal for United against Young Boys of Switzerland, in the 13th minute.

Portuguese star Cristiano Ronaldo, Manchester United striker, is playing his 177th match in the Champions League, equaling the record set by former Spanish goalkeeper Iker Casillas, as the most participating in the history of the competition.

Manchester United is seeking to win to ensure competition for the final price in front of the stubborn duo Villarreal and Atalanta, rivals with him in the group competitions, who also meet today.

Rockets and John Wall agree to seek a trade