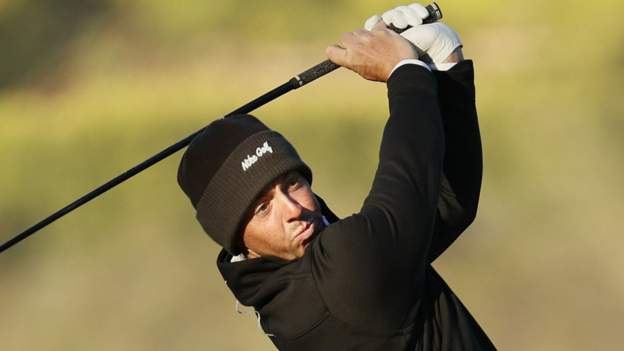 Rory McIlroy missed his first cut since the 2019 Open Championship after recording a second-round 76 at the Genesis Invitational.

McIlroy had played in 30 events since his Friday exit at the Open in his native Northern Ireland.

The Northern Irishman carded one birdie, four bogeys and a double bogey to drop down to seven over par.

Sam Burns hit a bogey-free 66 to go 12 under, which put him five clear of a group which includes Dustin Johnson.

Burns led after an opening 64 and his 12-under-par total tied the 36-hole course record.

Padraig Harrington, competing in his first event since returning after testing positive for Covid-19, will also miss the weekend’s play after Europe’s Ryder Cup captain shot a 76 to fall to nine over par.

Hoping to bounce back after an opening 73, McIlroy dropped a shot at 12, his third hole, and while he responded with a birdie at 13, the four-time major winner let further shots slip at 14, 17 and 18.

After a run of seven straight pars on his back nine, a double-bogey six at the eighth capped a disappointing week for the 31-year-old, who prior to this week held the longest active cut streak on the PGA Tour with 25.

McIlroy will return to action on Thursday at the World Golf Championship event in Florida, which was relocated from Mexico due to the pandemic.

Jordan Spieth is in a group a further stroke off the pace, with England’s Matthew Fitzpatrick remaining on his overnight position of five under after a 71 and Brooks Koepka among those on four under.

McIlroy wasn’t the only big name to miss the cut as Bryson DeChambeau exited on two over, with Justin Thomas a stroke behind the Northern Irishman on eight over.