‘Tell us true scale of ward cases’: Row erupts as data shows a third of Covid patients are in hospital for reasons other than the virus

A row erupted over the Government’s Covid figures last night as it emerged almost one in three in hospital with the virus was admitted for unrelated reasons.

NHS statistics revealed the proportion of so-called ‘incidental’ coronavirus admissions had risen to a record 29 per cent – sparking claims that official figures were misleading.

These cases are from patients taken to hospital for an unrelated reason, such as a fall or broken bone, who just happen to then discover they also have the virus.

It means thousands of those who are being counted as Covid admissions – which would suggest they are severely ill with the condition – are not actually suffering seriously with the virus.

Many only tested positive once they were on wards – and may have simply caught the virus while there.

It has raised concerns that the headline statistics – which drive Government decisions on restrictions and lockdowns – are overestimating how many people are dangerously sick with Covid.

A row erupted over the Government’s Covid figures as it emerged almost one in three in hospital with the virus was admitted for unrelated reasons. Pictured: Boris Johnson visiting a Covid vaccination centre in Milton Keynes on Wednesday

‘We cannot make decisions based on hospital admissions when we don’t know how many were admitted for other reasons and subsequently tested positive.’ He went on: ‘It also speaks very badly to the NHS’s ability to control Covid in hospitals when so many people are catching it there.’

He called for the independent Office for National Statistics to publish the figures for true Covid admissions, rather than the NHS.

Tory backbencher Sir Geoffrey Clifton-Brown said: ‘We need to be much clearer about what the primary purpose was of someone being admitted to hospital.

‘If they’ve got Covid later it’s wrong to ascribe that to a Covid admission. We should be much more straightforward with the statistics.’ Because hospital inpatients are now routinely tested for Covid, admissions data in England have always included those who were brought in for entirely separate reasons but were later found to be infected, either because they had it already or caught it in hospital.

From July, trusts were told to provide a breakdown of those who were primarily admitted because of acute Covid symptoms and those who were in hospital for other reasons. 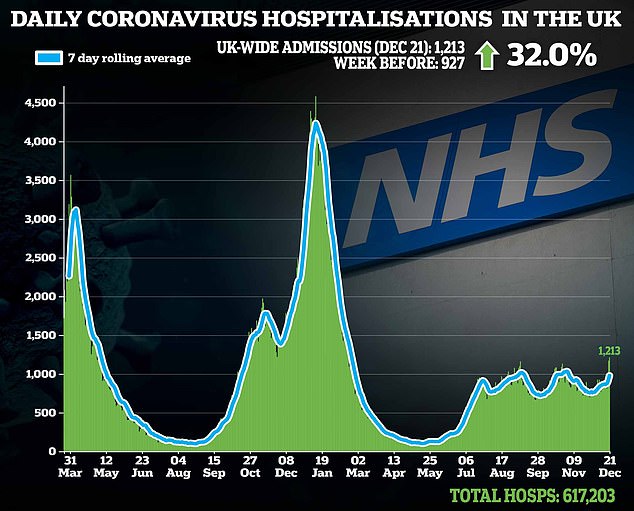 Many only tested positive once they were on wards – and may have simply caught the virus while there. Pictured: a graph showing 617,203 Covid hospitalisations recorded up to December 21

Initially the figures showed that 20 per cent – one in five – of those in hospital with Covid were admitted for another condition. But the proportion has steadily grown before reaching a series of new highs in recent weeks.

It stood at 25 per cent – one in four – on December 12 before reaching 27 per cent five days later, then 28 per cent on the 19th. The most recent figure in the dataset, published each week by NHS England, was 29 per cent on December 21. This proportion is certain to go up even further in the next set of figures due to rising cases in general.

The most recent figures show that, of the 6,245 beds occupied by patients with Covid, only 4,432 were being primarily treated for the virus.

Further analysis shows that just a fifth of the latest weekly rise in Covid inpatients was down to ‘true’ cases, with 45 sufferers admitted because of the virus while the other 214 arrived for other conditions. 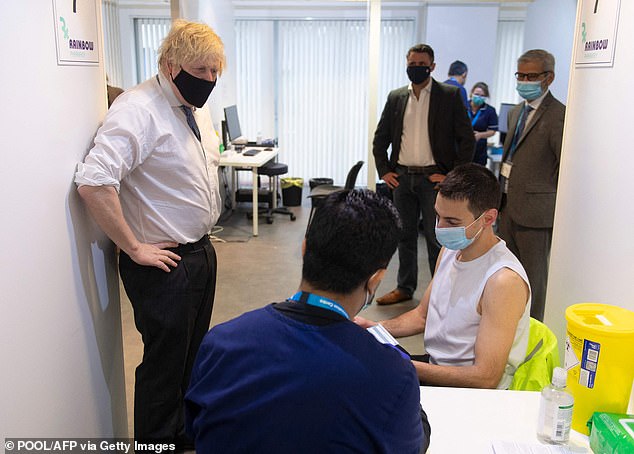 The Prime Minister is seen visiting a Covid vaccination centre at the Rainbow Pharmacy in the Open University Campus, Milton Keynes, on Wednesday

The number of incidental admissions is likely to have risen still further since then because of the rapid spread of the milder Omicron variant, with cases covering the week to Christmas Eve to be published on New Year’s Eve.

The growing phenomenon has been discussed by top hospital bosses in recent days.

Chris Hopson, chief executive of membership body NHS Providers, wrote on Monday: ‘Talking to trust chief executives this morning, what’s very interesting is how many are talking about number of asymptomatic patients being admitted to hospital for other reasons and then testing positive for Covid. Some are describing this as “incidental Covid”.

‘As [the] Covid community infection rate rises rapidly due to Omicron, we will get more cases of this type of incidental Covid-19 in hospital.’

He pointed out that these cases will also cause problems because the patients will have to be isolated to avoid cross-infection, but added: ‘These cases are, obviously, not same as Covid driven serious respiratory illness.’

INE will meet this Thursday to continue revocation of mandate

INE will meet this Thursday to continue revocation of mandate