Royal experts hit out today at what they called ‘shameful tantrums’ thrown by Princes Harry and Andrew about what uniform to wear to the Duke of Edinburgh‘s funeral this weekend, saying it is ‘not about them’.

Among the most scathing was royal biographer Angela Levin, who said the Queen had ‘got much, much more to cope with than deciding on what male family members should wear for her adored husband’s funeral’.

Former BBC royal correspondent Peter Hunt was also unimpressed, saying it was ‘striking that Andrew thought he could use his father’s funeral to advance his rehabilitation’ amid talks over him wanting to dress as an Admiral.

But royal expert Robert Jobson said he hoped Harry and Andrew would be allowed to wear their military uniform to the funeral ‘because they are two guys who have served their Queen and Country on the front line’.

The commentators reacted after the Daily Mail revealed that all senior members of the Royal Family will now wear mourning dress at the Duke’s funeral at Windsor Castle which will take place at 3pm on Saturday.

The Mail understands that, in an unprecedented about-turn, a last minute decision, approved by the Queen, has been made that no royals will wear military uniform in order to present a united family front. 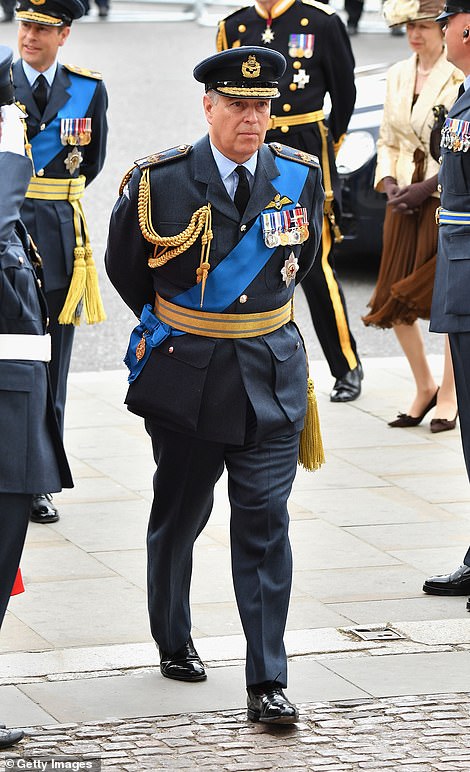 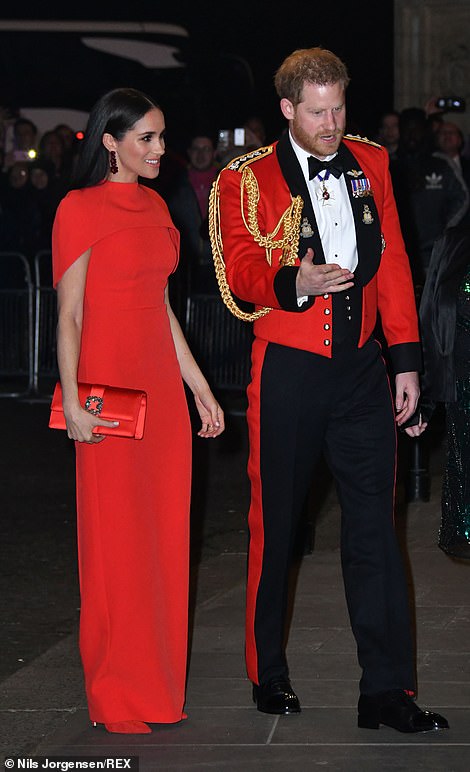 Prince Andrew in ceremonial dress at a service to mark the centenary of the RAF in London on July 10, 2018 (left); and Prince Harry attending Royal Albert Hall with Meghan in his dress as Captain General of the Royal Marines on March 7, 2020 (right)

Today, Ms Levin, who has written books about Harry and William, tweeted: ‘Due to Princes Andrew and Harry throwing tantrums, none of the Royal Family will be wearing military uniforms on Saturday.

‘You’d think the Queen and Duke’s exemplary behaviour would have passed down. Their behaviour is shameful. The funeral is not about them. Actions have consequences.’

She later added: ‘Hasn’t our Queen at 94, got much much more to cope with than deciding on what male family members should wear for her adored husband’s funeral?’

Mr Hunt also gave his view in a series of tweets, saying: ‘Adapt to survive is a mantra that has, once again, served the royals well. Now, Harry won’t be the loner in a suit and Andrew won’t wear a uniform with extra lace. His attempts to accelerate his rehabilitation have stuttered.’

”Uniform gate’ might just prompt thoughtful royals to reflect on the mistakes they made when they removed Prince Harry’s military appointments and shut the door on Harry and Meghan – rather than leaving it slightly ajar.

‘It’s striking that Andrew thought he could use his father’s funeral to advance his rehabilitation and that it took the leak of news about his uniform choice, to stop him.’ 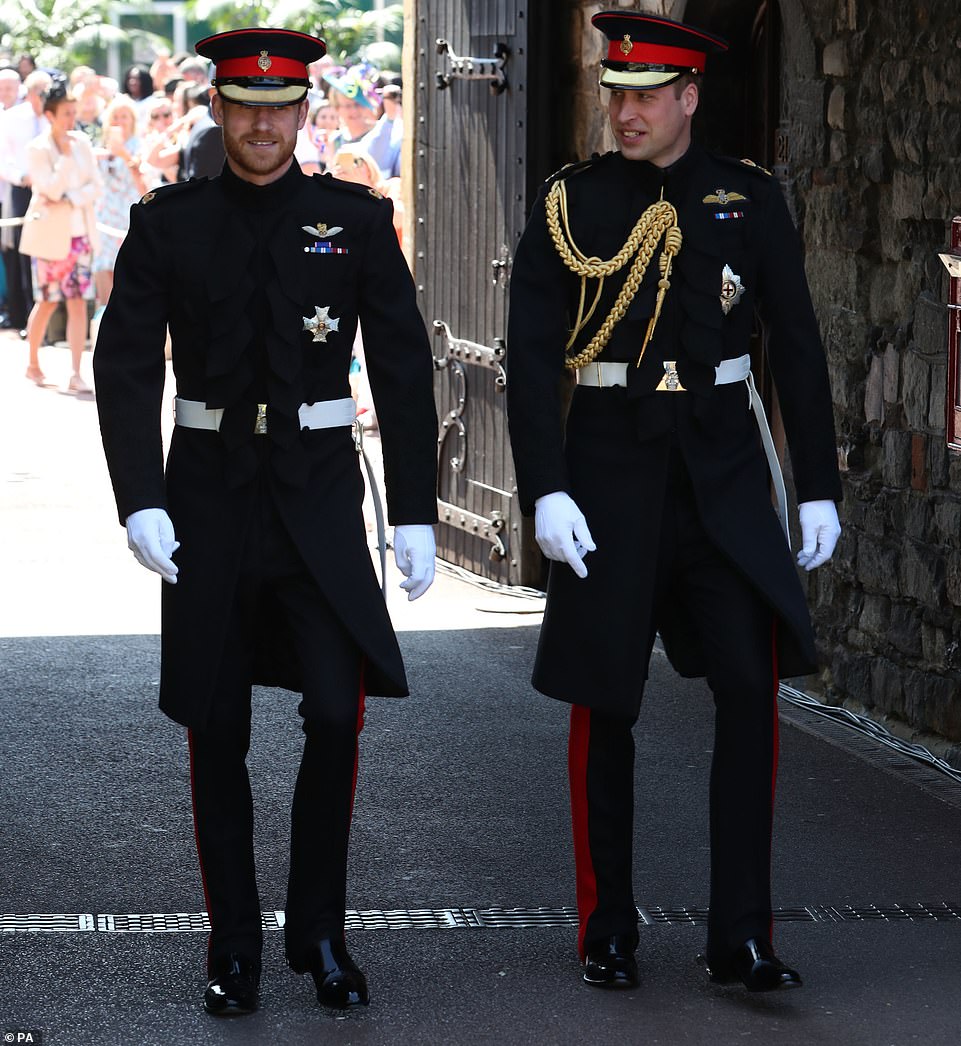 Harry, 36, is understood to have wanted to wear the Blues and Royals dress uniform he wore on his wedding day in May 2018

The Prince of Wales, Duke of Cambridge, Earl of Wessex and Princess Royal would have been, by convention for a royal ceremonial funeral, in full military uniform

But Mr Jobson, author of the upcoming book Prince Philip’s Century: The Extraordinary Life of the Duke of Edinburgh which is out next month, said he hoped Harry and Andrew would wear military uniform.

Royal Family members with a military rank have worn uniforms at state occasions since the 19th century.

At the Queen Mother’s funeral in 2002, the last funeral of a royal consort, Prince Philip, Prince Charles, Prince Andrew and Princess Anne all wore uniforms.

Prince Edward, who quit the Royal Marines after four months’ service, wore a black morning coat, as did his nephews William and Harry, who had yet to serve in the Armed Forces. Anne had not served in the military but held the honorary rank of Rear Admiral.

By contrast, at the funeral of Princess Diana royals wore dark suits and not military dress. The funeral was considered a ceremonial event rather than a full state occasion.

In 1952, at the funeral of the Queen’s father King George VI, his brothers the Duke of Windsor and the Duke of Gloucester wore military dress alongside Prince Philip. The Queen and Queen Mother wore mourning clothes, including heavy black veils.

Illustrations from Queen Victoria’s 1901 funeral show her sons Edward VII and the Duke of Connaught in military dress on horseback in her funeral procession.

Speaking on the Royal Beat on True Royalty TV, he said: ‘I hope they are allowed to wear their uniform, both him (Harry) and The Duke of York, because they are two guys who have served their Queen and Country on the front line.  It is only appropriate. I think Harry will and I think the Duke of York will as well.’

Behind the scenes, courtiers have been racked by concern that Harry, who had to give up his honorary military titles after he acrimoniously quit royal duties and moved to the US, would be the only senior royal not in uniform.

Harry, 36, is understood to have wanted to wear the Blues and Royals dress uniform he wore on his wedding day in May 2018.

As a former captain with the Household Cavalry, however, he is entitled only to wear a suit, with any medals he has been awarded in the course of his duties or by the Queen.

By contrast the Prince of Wales, Duke of Cambridge, Earl of Wessex and Princess Royal would have been, by convention for a royal ceremonial funeral, in full military uniform.

The issue was compounded when Prince Andrew demanded to wear the uniform of admiral, a position he had offered to defer taking up after stepping back from public duties in the wake of the Epstein scandal.

Crucially Andrew has not been stripped of his honorary military titles and remains a vice-admiral in the Royal Navy.

It led to concerns within the Royal Household that if Andrew were denied his request to go in uniform, he and Harry would be the only ones in civilian dress who had seen active service in the military. A source said: ‘There was the risk of real embarrassment.’

The Queen has decided that, to retain family unity and spare Harry any public humiliation, everyone will dress the same – morning coats and black ties for the men, simple black outfits for the women.

It is believed to be only the second time in more than a century that members of the Royal Family have not worn uniform to the funeral of a monarch or their spouse.

It will, however, be seen as a significant public olive branch to Harry in the wake of his and Meghan’s devastating interview with Oprah Winfrey last month, in which they criticised members of his immediate family and accused the institution of racism. 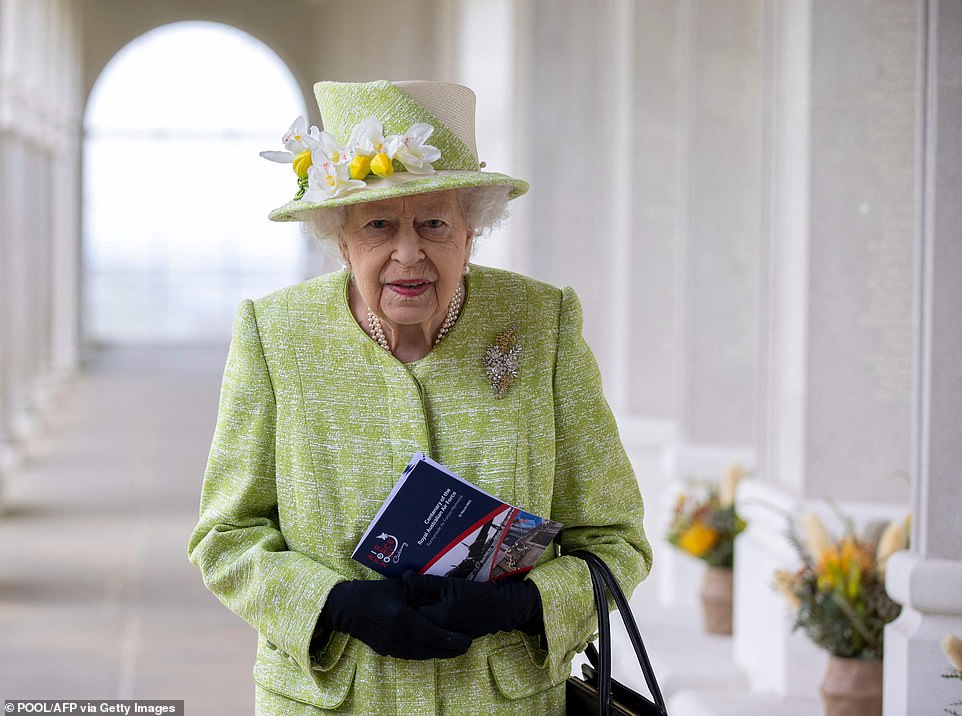 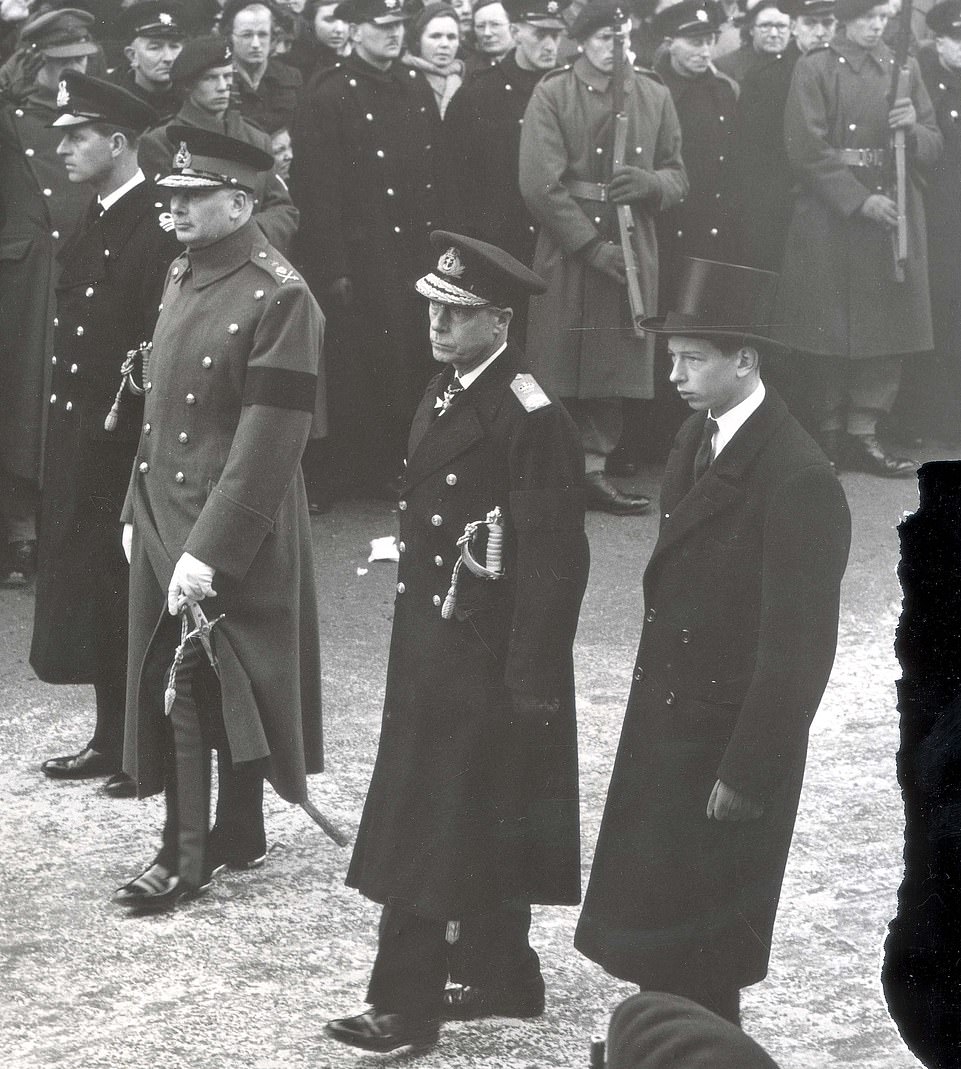 The Duke of Edinburgh (left) walks in procession with the Duke of Gloucester, Duke of Windsor (Edward VIII) and the Duke of Kent as the funeral cortege of King George VI makes its way from Windsor Station to St George’s Chapel in 1952

Buckingham Palace last night declined to comment, but the Mail understands the decision will be officially announced today.

It is believed that there is a genuine desire to try to start to repair stricken family relationships, particularly the rift between Harry and his older brother William, and the funeral of their beloved grandfather may be a good place to start.

Discussions on the issue went to the wire, with senior aides including the Master of the Household, Vice-Admiral Tony Johnstone-Burt, trying to negotiate a solution. The final decision rested with the widowed Queen.

A source close to Andrew said yesterday that he would ‘do what is appropriate’ and had no intention to distract from his father’s funeral.

But he requested to forgo the promotion until he is able to clear his name and fully resume royal duties. However it is understood that he still asked to go to his father’s funeral as an admiral.

Saturday’s event is known as a royal ceremonial funeral – based on one held 19 years ago for the Queen Mother, wife of George VI – at Philip’s specific request. 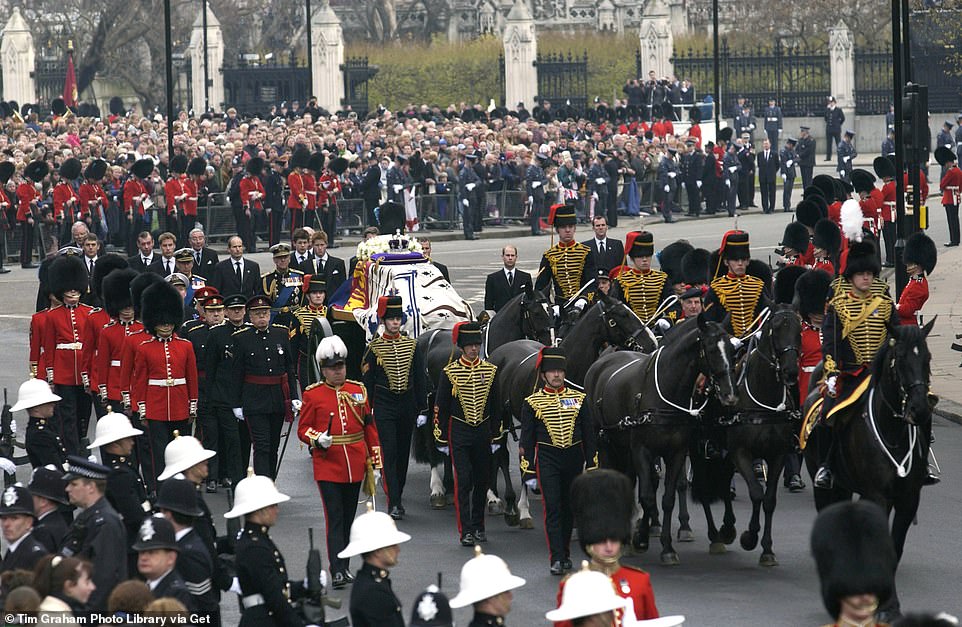 Prince Charles, Prince Philip, Prince Harry And Prince William walk behind the coffin of the Queen Mother as it arrives at Westminster Abbey in April 2002 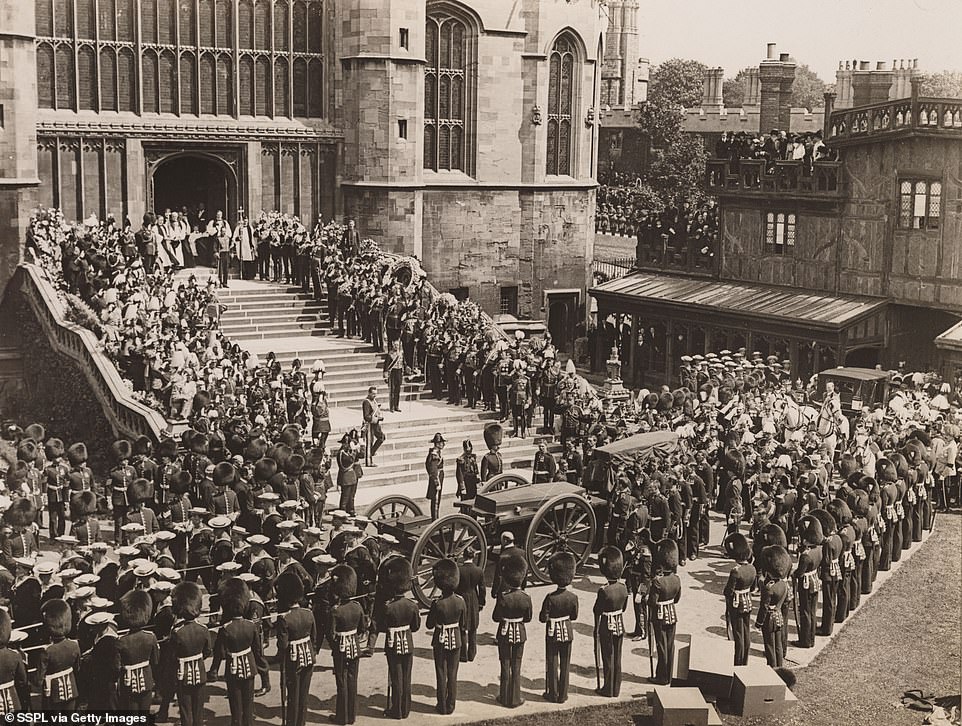 A photograph by Horace W Nicholls of the funeral of King Edward VII at St George’s Chapel, Windsor, in November 1910

It is not as large or as grand as a state funeral, but many of the ceremonial elements are the same.

All senior royals entitled to wear uniform, including the Duke of Edinburgh, did so in April 2002. This was in contrast to the private funeral of the Queen’s sister, Princess Margaret, weeks earlier, where mourning dress was worn, as well as five years earlier at the funeral of Diana, Princess of Wales, by then a former royal.

Initially the plan was for senior royals to wear military uniform on Saturday in line with convention. But it quickly became clear this was a thorny issue given how vocal Harry, currently quarantining at Frogmore Cottage at Windsor after flying back from the US, has been over the loss of his military titles.

Sources close to Harry have revealed the depth of his anger, particularly given he had served ten years in the military with two frontline tours of Afghanistan.

Last month he told Oprah that losing his official positions ‘hurt’ but added that he ultimately respected his grandmother’s decision.

However, he pointedly attended – with Meghan – a military cemetery in Los Angeles wearing his lounge suit and medals, after the Queen denied his request to have a wreath laid at the Cenotaph on his behalf on Remembrance Sunday as he is no longer a working royal.

Citigroup’s profit jumps to a record high in the fiscal first quarter.