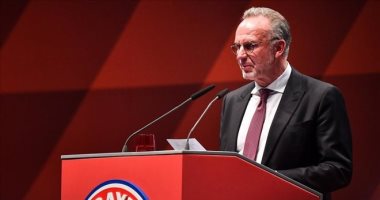 Karl-Heinz Rummenigge, former CEO of Bayern Munich, expressed his happiness with the great victory that his team achieved at the expense of Barcelona by 3-0 on Tuesday evening in the European Champions League..

The Bavarian giant began its campaign in the group stage of the Champions League, with a precious victory away from the home, at the expense of Barca, with three clean goals..

In statements to the German newspaper “Sport Bild”, Rummenigge said: “Bayern played great and won well, the team is in very good shape, but it is too early to talk about the candidates for the title, the expectations really start in the knockout stage.“.

And the former CEO of Bayern Munich added: “When I looked at Barcelona and how it performed tactically, without Messi, their souls were torn, they are facing difficult times. “.

Rummenigge continued: “Lewandowski is a goal machine, he flirted with Real Madrid at the beginning, but we always told him that he could win champions with Bayern Munich.“.

Rummenigge continued: “Thomas Muller was lucky because his shot deflected, he scored an important goal at that time, with the 1-0 win, Bayern’s dominance paid off. Thomas Muller is a self-motivator, he was one of the biggest beneficiaries of the move from Kovac to Flick, he is a player very valuable“.

He continued: “Alfonso Davies’ speed, his top speed is 38 km / h technically, he can still improve a little, contracting with Dayot Opicano, is a very important transmission, he is fast, aggressive and physically great.”“.

On the prospect of Leon Goretzka’s renewal, he said: “I think he is a good and very important player for Bayern Munich and advises both parties to stay together. “.

He commented on the dispute between Bayern and Dortmund, saying: “Football lives with a bit of harassment. It is evidence that Bayern sees Dortmund as a contender for the championship. You also want to stimulate a little bit.” “.

On signing Erling Haaland (21) as a potential newcomer to Bayern: “Lewandowski is the best attacking player in the world, Haaland is the second best. Also it could be that they open their wardrobe a bit more in the summer and maybe get Haaland and Kylian Mbappe “.

He also spoke about Cristiano Ronaldo’s return to Manchester, saying: “He is a phenomenon! He is 36 years old and has been playing at the same level for 20 years.. “.

“Don’t Touch My Clothes” .. Online campaign for Afghan women to show the beauty of their traditional clothes