News of Limbaugh’s death was announced by his fourth wife Kathryn on his radio show.

‘I know that I am most certainly not the Limbaugh that you tuned in to listen to today,’ Kathryn, who was married to Limbaugh for a decade, told his viewers.

‘I, like you, very much wish Rush was behind this golden microphone right now, welcoming you to another exceptional three hours of broadcasting. It is with profound sadness I must share with you directly that our beloved Rush, my wonderful husband, passed away this morning due to complications from lung cancer.’

Limbaugh, who pioneered the conservative media revolution, had been diagnosed with Stage IV advanced lung cancer back in February 2020.

Days after revealing he had cancer, Limbaugh attended President Donald Trump’s State of the Union where he was awarded the Presidential Medal of Freedom.

First Lady Melania Trump presented him with the nation’s highest civilian honor after her husband lauded Limbaugh as ‘a special man beloved by millions of Americans’ and ‘the greatest fighter and winner that you will ever meet’. 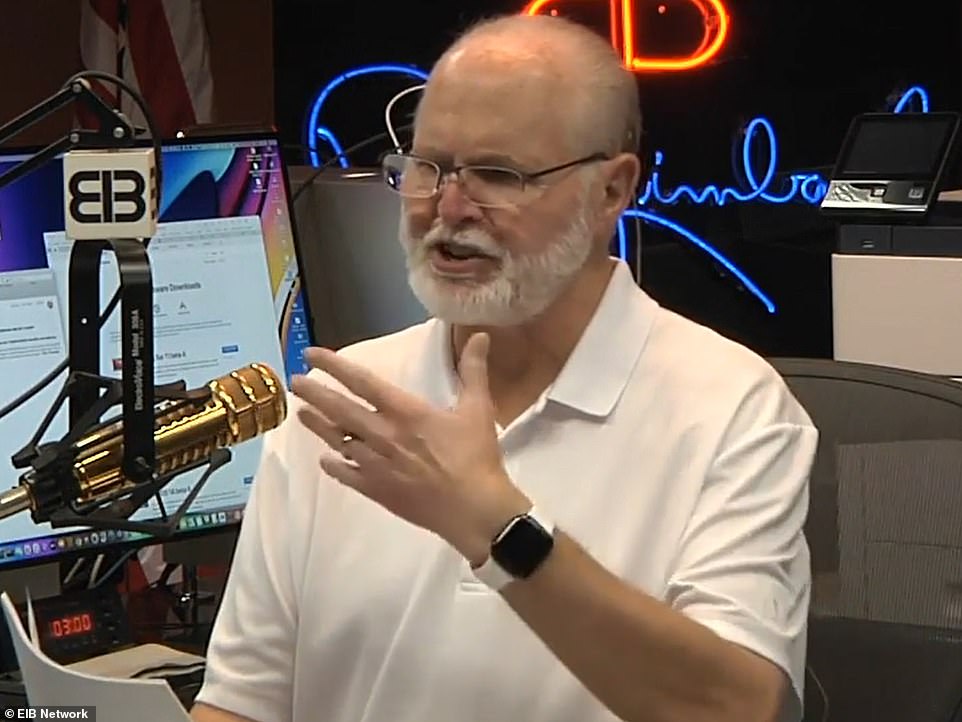 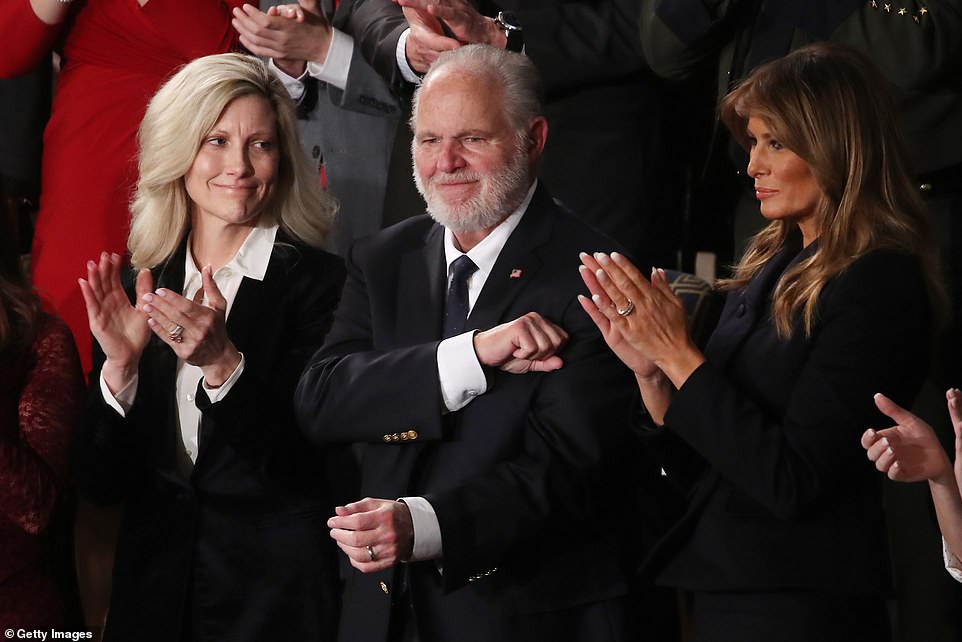 The day after revealing he had cancer, Limbaugh was invited by President Trump to attend his State of the Union where he was awarded the Presidential Medal of Freedom. He is pictured alongside his wife Kathryn and First Lady Melania Trump

Limbaugh was one of Trump’s most ardent supporters.

In his first interview since leaving office, Trump on Wednesday paid tribute to Limbaugh in a phone interview with Fox News.

‘Rush is irreplaceable,’ Trump said. ‘Unique. He had an audience that was massive.’

‘People, whether they loved him or not, they respected him.’

Despite his diagnosis, Limbaugh continued to host his radio show, which had been in national syndication since 1988, throughout much of last year.

He had vowed to do his program ‘as normally and as competently’ as he could while undergoing treatment. He missed only a few shows in October.

In his last broadcast of 2020, Limbaugh thanked his listeners for their support as he opened up about his fight with terminal cancer.

Tributes immediately poured in from high-profile Republicans and conservatives, including Donald Trump Jr., who called him a ‘true American legend’.

Unflinchingly conservative, wildly partisan, bombastically self-promoting and larger than life, Limbaugh galvanized listeners for more than 30 years with his talent for vituperation and sarcasm. 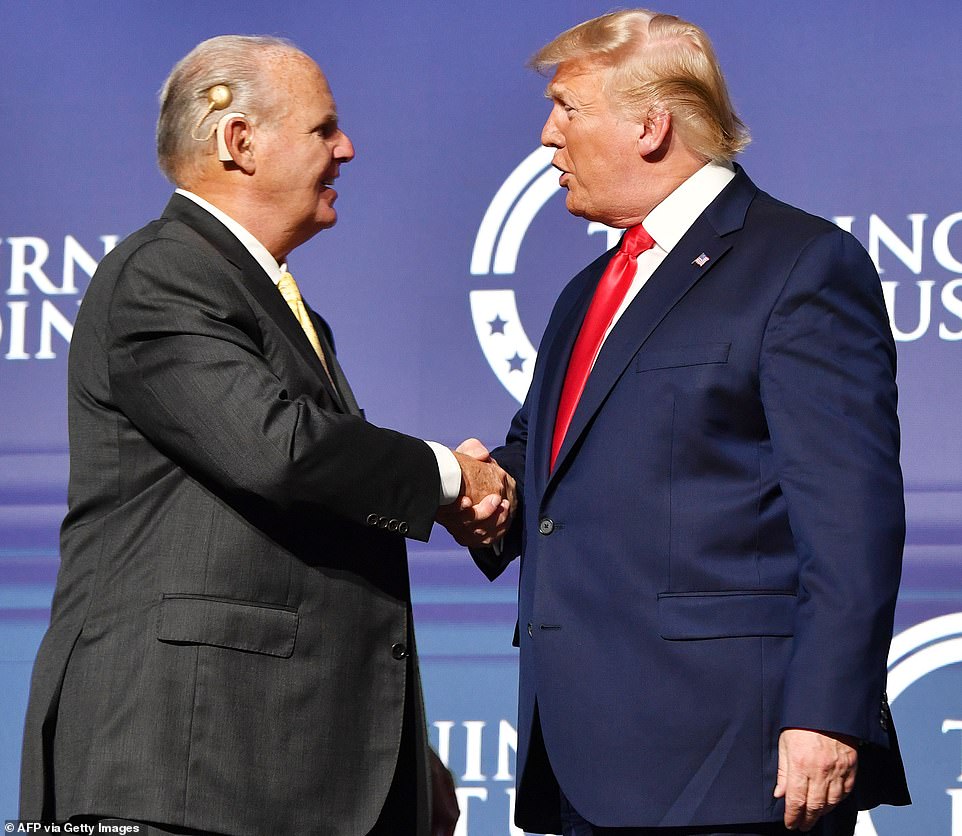 Limbaugh, who pioneered the American media phenomenon of conservative talk radio, was one of Donald Trump’s most ardent supporters 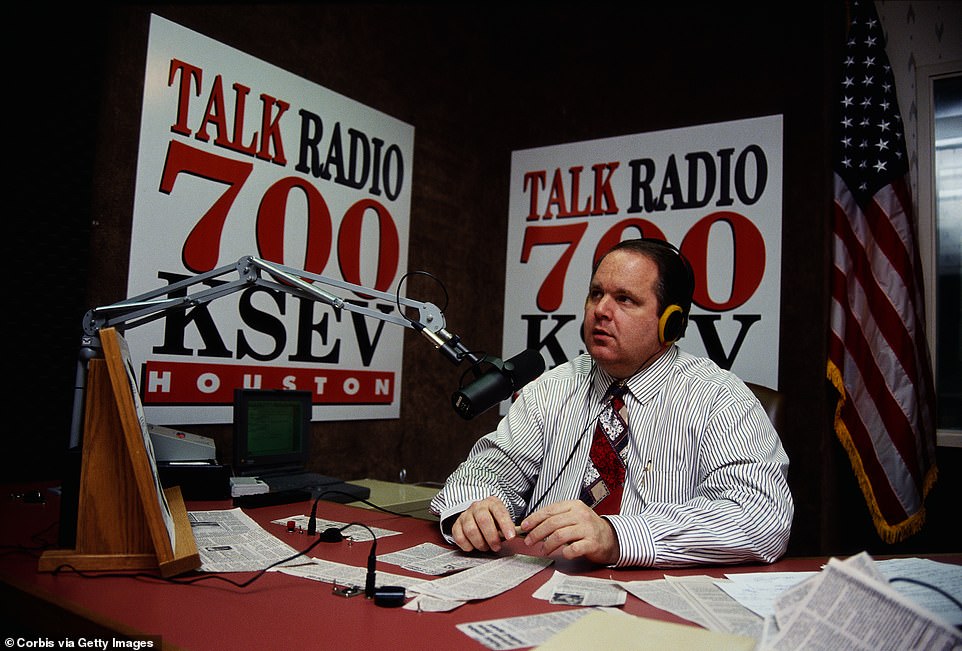 His radio show became nationally syndicated in 1988 and quickly built a large and committed following, making him wealthy in the process

His radio show became nationally syndicated in 1988 and quickly built a large and committed following, making him wealthy in the process.

Forbes magazine estimated his 2018 income at $84 million, ranking him behind only Howard Stern among radio personalities.

He called himself an entertainer, but his monologues during his three-hour weekday radio show broadcast on nearly 600 US stations shaped the national political conversation, swaying ordinary Republicans and the direction of their party.

Limbaugh’s appeal and the success of his top-rated radio show arose from his brash and colorful style, his delight in baiting liberals and Democrats and his promotion of conservative and Republican causes and politicians.

Blessed with a made-for-broadcasting voice, he delivered his opinions with such certainty that his followers, or ‘Ditto-heads,’ as he dubbed them, took his words as sacred truth.

‘In my heart and soul, I know I have become the intellectual engine of the conservative movement,’ Limbaugh, with typical immodesty, told author Zev Chafets in the 2010 book ‘Rush Limbaugh: An Army of One.’

Limbaugh took as a badge of honor the title ‘most dangerous man in America.’ He said he was the ‘truth detector,’ the ‘doctor of democracy,’ a ‘lover of mankind,’ a ‘harmless, lovable little fuzz ball’ and an ‘all-around good guy.’

He claimed he had ‘talent on loan from God.’

Long before Trump’s rise in politics, Limbaugh was pinning insulting names on his enemies and raging against the mainstream media, accusing it of feeding the public lies. 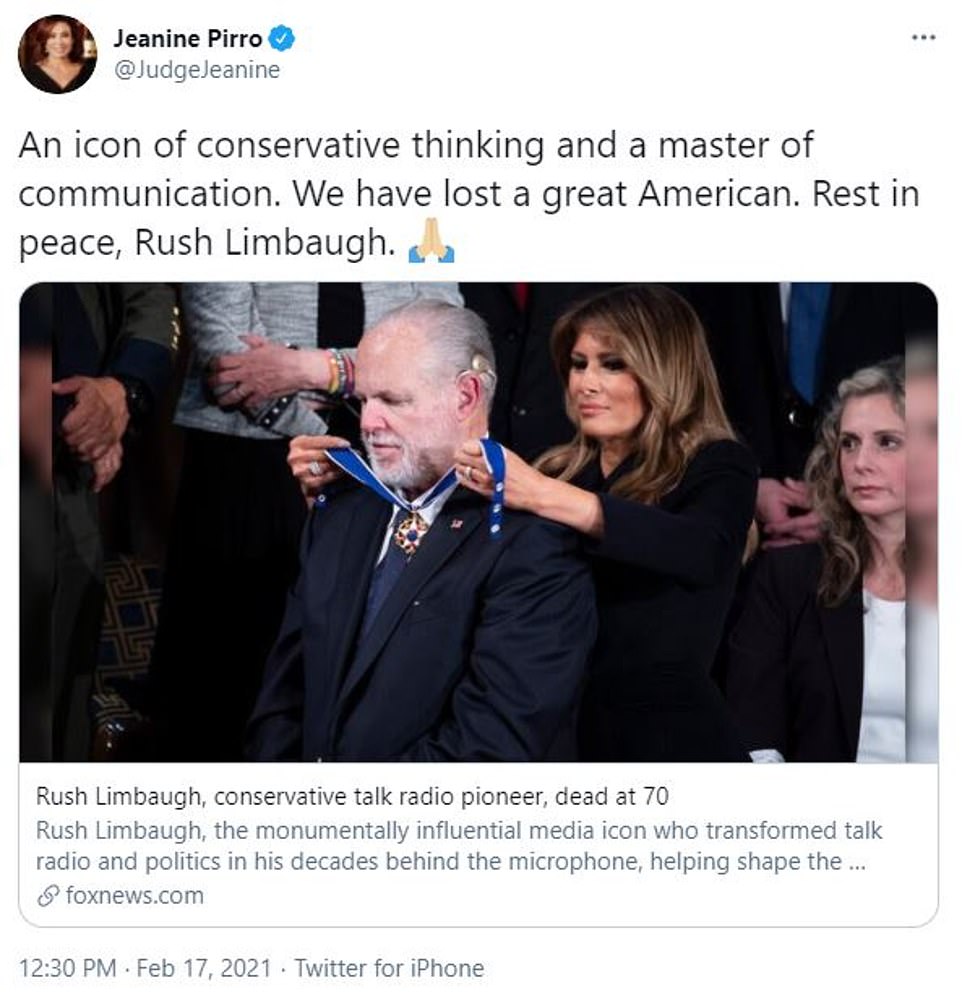 He called Democrats and others on the left communists, wackos, feminazis, liberal extremists, f*****s and radicals.

When a Washington advocate for the homeless killed himself, he cracked jokes. As the AIDS epidemic raged in the 1980s, he made the dying a punchline. He called 12-year-old Chelsea Clinton a dog.

He suggested that the Democrats’ stand on reproductive rights would have led to the abortion of Jesus Christ. When a woman accused Duke University lacrosse players of rape, he derided her as a ‘ho,’ and when a Georgetown University law student supported expanded contraceptive coverage, he dismissed her as a ‘s**t.’ When Barack Obama was elected president in 2008, Limbaugh said: ‘I hope he fails.’

Limbaugh often enunciated the Republican platform better and more entertainingly than any party leader, becoming a GOP kingmaker whose endorsement and friendship were sought. Polls consistently found he was regarded as the voice of the party.

His idol, Ronald Reagan, wrote a letter of praise that Limbaugh proudly read on the air in 1992: ‘You’ve become the number one voice for conservatism.’ In 1994, Limbaugh was so widely credited with the first Republican takeover of Congress in 40 years that the GOP made him an honorary member of the new class.

During the 2016 presidential primaries, Limbaugh said he realized early on that Trump would be the nominee, and he likened the candidate´s deep connection with his supporters to his own. In a 2018 interview, he conceded Trump is rude but said that is because he is ‘fearless and willing to fight against the things that no Republican has been willing to fight against.’

Trump, for his part, heaped praise on Limbaugh, and they golfed together. (The president’s Mar-a-Lago estate is eight miles down the same Palm Beach boulevard as Limbaugh´s $40 million beachfront expanse.) 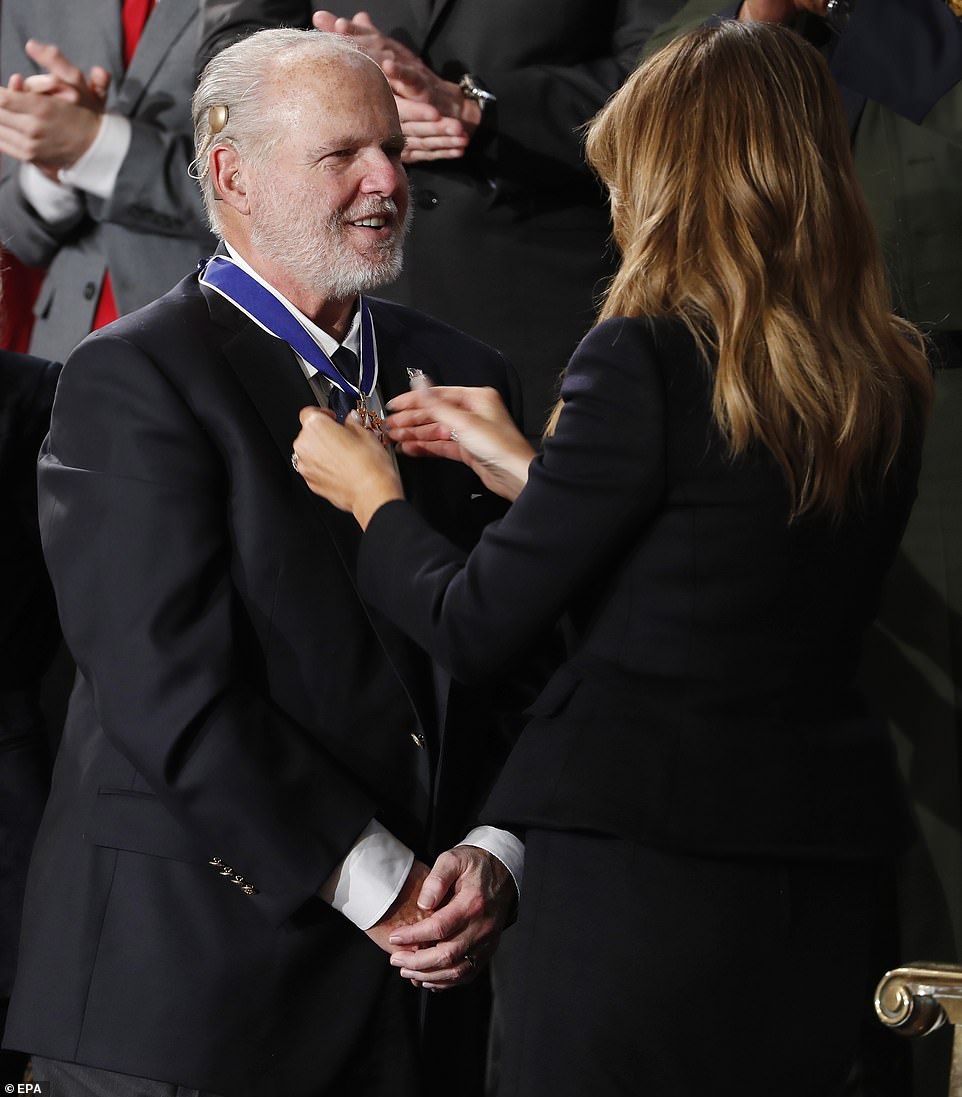 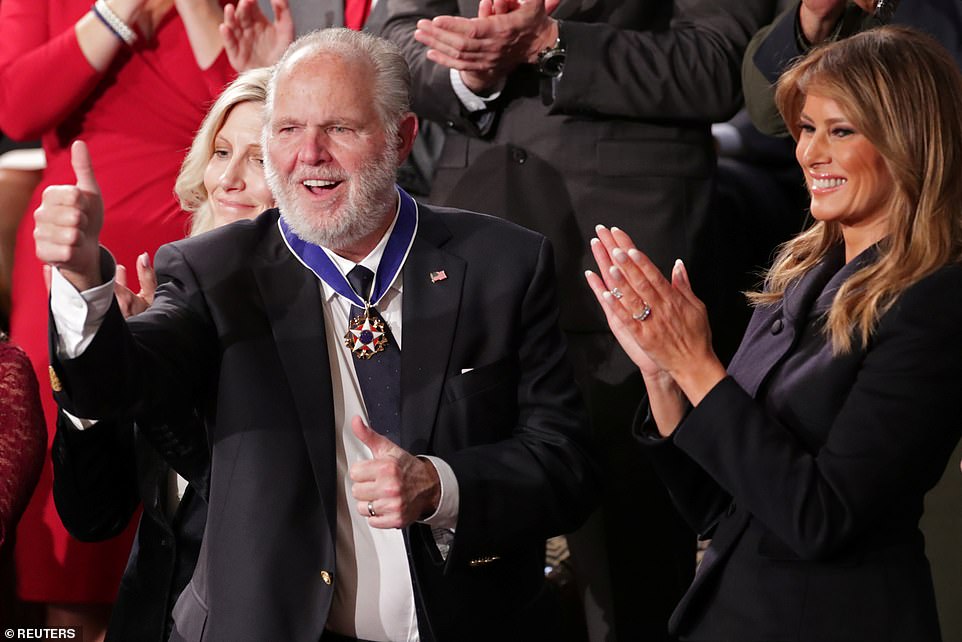 In honoring Limbaugh at the State of the Union, Trump called his friend ‘a special man beloved by millions’

In honoring Limbaugh at the State of the Union, Trump called his friend ‘a special man beloved by millions.’

Limbaugh influenced the likes of Sean Hannity, Glenn Beck, Bill O’Reilly and countless other conservative commentators who pushed the boundaries of what passes as acceptable public discourse.

His brand of blunt, no-gray-area debate spread to cable TV, town hall meetings, political rallies and Congress itself, emerging during the battles over health care and the ascent of the tea party movement.

In 2003, Limbaugh admitted an addiction to painkillers and went into rehab. Authorities opened an investigation into alleged ‘doctor shopping,’ saying he received up to 2,000 pills from four doctors over six months.

He ultimately reached a deal with prosecutors in which they agreed to drop the charge if he continued with drug treatment and paid $30,000 toward the cost of the investigation.

He lost his hearing around that time. He said it was from an autoimmune disorder, while his critics said hearing loss is a known side effect of painkiller abuse. He received cochlear implants, which restored his hearing and saved his career.

A portly, round-faced figure, Limbaugh was divorced three times, after marrying Roxy Maxine McNeely in 1977, Michelle Sixta in 1983 and Marta Fitzgerald in 1994.

He married his fourth wife, Kathryn Rogers, in a lavish 2010 ceremony featuring Elton John. He had no children.

Rush Hudson Limbaugh III was born January 12, 1951, in Cape Girardeau, Missouri. His mother was the former Mildred Armstrong, and his father, Rush Limbaugh Jr., was a lawyer. 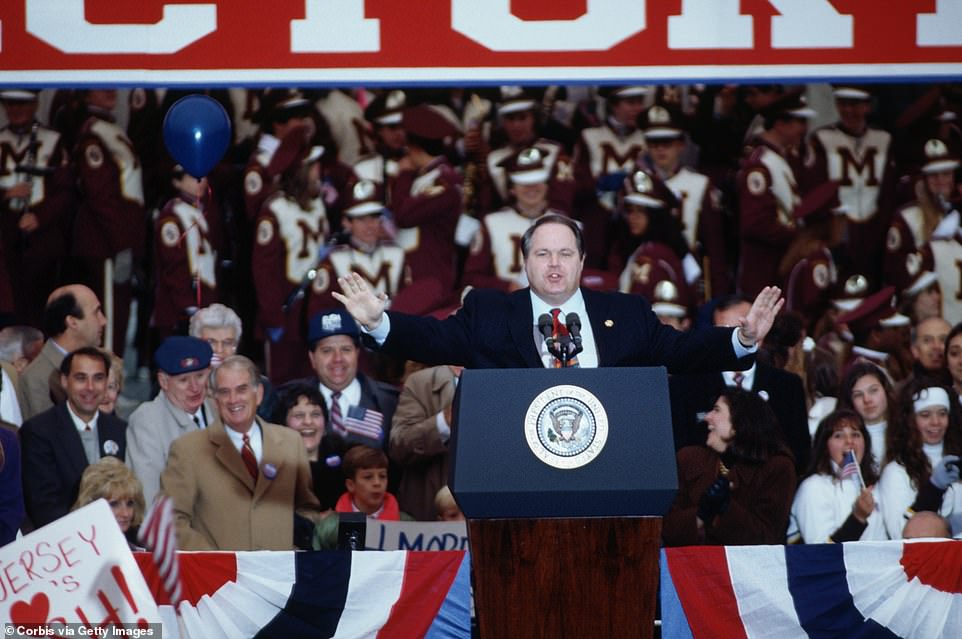 Limbaugh often enunciated the Republican platform better and more entertainingly than any party leader, becoming a GOP kingmaker whose endorsement and friendship were sought. He is pictured at a rally for President George Bush’s re-election campaign 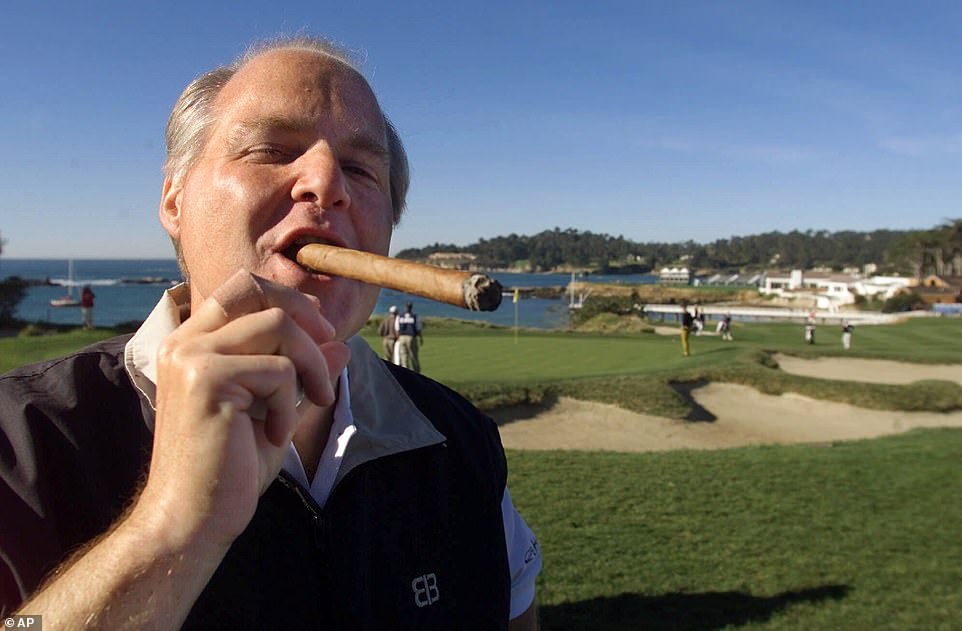 Limbaugh, an outspoken lover of cigars, is pictured above in 2001 in California

Rusty, as the younger Limbaugh was known, was chubby and shy, with little interest in school but a passion for broadcasting. He would turn down the radio during St. Louis Cardinals baseball games, offering play-by-play, and gave running commentary during the evening news. By high school, he had snagged a radio job.

Limbaugh dropped out of Southeast Missouri State University for a string of DJ gigs, from his hometown, to McKeesport, Pennsylvania, to Pittsburgh and then Kansas City. Known as Rusty Sharpe and then Jeff Christie on the air, he mostly spun Top 40 hits and sprinkled in glimpses of his wit and conservatism.

‘One of the early reasons radio interested me was that I thought it would make me popular,’ he once wrote.

But he didn’t gain the following he craved and gave up on radio for several years, beginning in 1979, becoming promotions director for baseball’s Kansas City Royals. He ultimately returned to broadcasting, again in Kansas City and then Sacramento, California.

It was there in the early 1980s that Limbaugh really garnered an audience, broadcasting shows dripping with sarcasm and bravado. The stage name was gone.

Limbaugh began broadcasting nationally in 1988 from WABC in New York. While his know-it-all commentary quickly gained traction, he was dismayed by his reception in the big city. He thought he would be welcomed by Peter Jennings, Tom Brokaw and Dan Rather.

‘I came to New York,’ he wrote, ‘and I immediately became a nothing, a zero.’

Ultimately, Limbaugh moved his radio show to Palm Beach and bought his massive estate. Talkers Magazine, which covers the industry, said Limbaugh had the nation´s largest audience in 2019, with 15 million unique listeners each week.

Limbaugh expounded on his world view in the best-selling books ‘The Way Things Ought to Be’ and ‘See, I Told You So.’

He had a late-night TV show in the 1990s that got decent ratings but lackluster advertising because of his divisive message. When he guest-hosted ‘The Pat Sajak Show’ in 1990, audience members called him a Nazi and repeatedly shouted at him.

He was fired from a short-lived job as an NFL commentator on ESPN in 2003 after he said the media had made a star out of Philadelphia Eagles quarterback Donovan McNabb because it was ‘very desirous that a black quarterback do well.’ His racial remarks also derailed a 2009 bid to become one of the owners of the NFL´s St. Louis Rams.

‘Do you ever wake up in the middle of the night and just think to yourself, `I am just full of hot gas?´’ David Letterman asked him in 1993 on ‘The Late Show.’

‘I am a servant of humanity,’ Limbaugh replied. ‘I am in the relentless pursuit of the truth. I actually sit back and think that I´m just so fortunate to have this opportunity to tell people what´s really going on.’