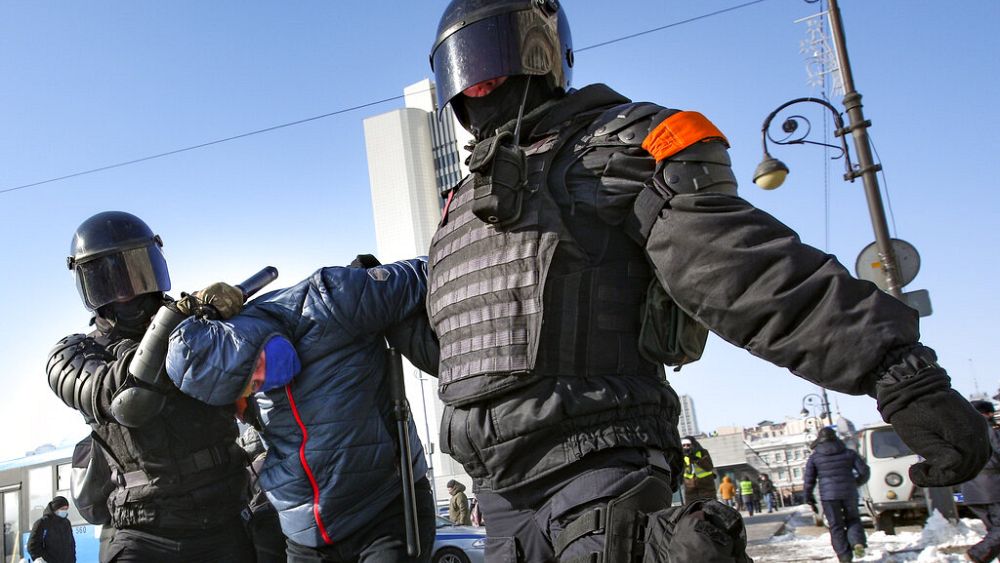 Russian police planned to restrict movement in the centre of Moscow on Sunday as the authorities warned supporters of jailed opposition leader Alexei Navalny against taking to the streets.

Protests are planned in multiple Russian cities, and early pictures from the Associated Press showed demonstrators being arrested in Vladivostock, in the far east of the country.

Meanwhile, prominent associates of Navalny have been detailed along with opposition journalists, and in St. Petersberg barriers have been erected to deter protesters.

His arrest came as he tried to enter the country after flying back from Germany, where he had spent five months recovering from nerve-agent poisoning.

Sunday’s demonstration in Moscow is planned for Lubyanka Square, where the Federal Security Service that Navalny claims committed the poisoning is headquartered.

Last week’s protests were the largest and most widespread in many years, and authorities aim to prevent a repeat.

Police conducted a series of raids this week at apartments and offices of Navalny’s family, associates and anti-corruption organization.

His brother Oleg, top aide Lyubov Sobol and three other people were put under two-month house arrest on Friday, as part of a criminal probe into alleged violations of coronavirus regulations during last weekend’s protests.

Irina Volk, a spokeswoman for the Interior Ministry that runs Russia’s police, also cited the pandemic in a Saturday warning against protests.

She said participants found in violation of epidemiological regulations could face criminal charges.

The city police department said much of central Moscow from Red Square to Lubyanka would have pedestrian restrictions on Sunday and that seven subway stations in the vicinity would be closed.

Restaurants in the area also are to be closed and the iconic GUM department store on Red Square said it would open only in the evening.

Navalny fell into a coma on August 20 while on a domestic flight from Siberia to Moscow and was transferred to a Berlin hospital two days later.

Labs in Germany, France and Sweden, and tests by the Organization for the Prohibition of Chemical Weapons, established that he was exposed to the Soviet-era Novichok nerve agent.

Russian authorities have refused to open a full-fledged criminal inquiry, citing a lack of evidence that he was poisoned.