Russian advance troops are already operating in Ukraine ahead of a possible invasion, a defence minister warned today.

James Heappey said a’ significant’ number of Vladimir Putin’s soldiers were already operating behind the lines.

His comments came amid a deepening east/west stand-off and a growing military build-up, with the US readying to send 8,500 combat troops to the region.

An estimated 100,000 Russian troops have massed at the border with Ukraine and intense diplomatic activity has failed to ease tensions.

Britain has already supplied Kyiv with thousands of anti-tank weapons and Mr Heappey likened the situation to the Nazi invasion of Poland in 1939 that triggered the Second World War.

Writing in the Sun he said: ‘To be British is to go to the aid of others and defend those who cannot defend themselves.

‘That’s why we went to the aid of Poland in 1939. That’s why we were one of the founding allies of Nato after the Second World War … we are being tested again.’

Russia has been warned it will be swiftly hit with an ‘unprecedented package of sanctions’ in the event of a fresh incursion in Ukraine after Boris Johnson joined Joe Biden and world leaders to present a united front to combat a feared invasion.

The Kremlin today expressed concern over what it said was an ‘exacerbation of tensions’ by Western nations. 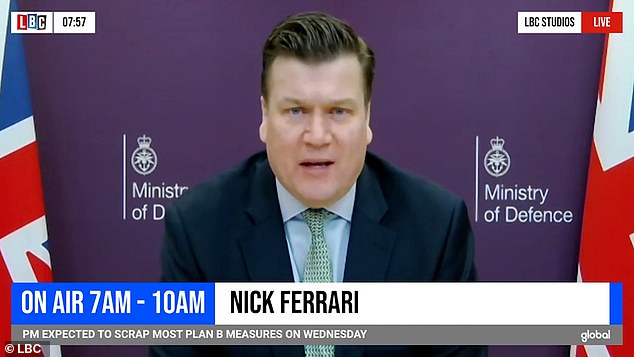 James Heappey said a’ significant’ number of Vladimir Putin’s soldiers were already operating behind the lines. 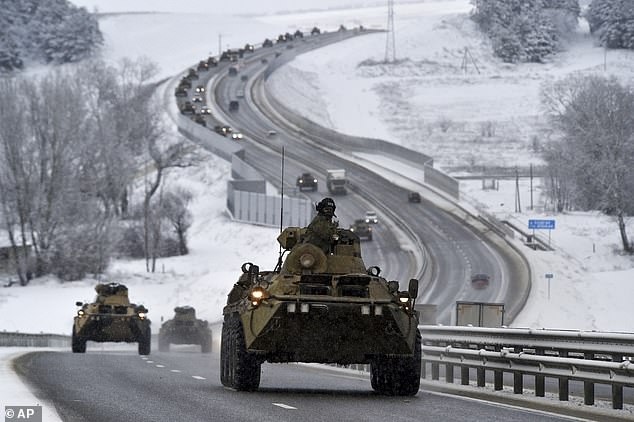 A convoy of Russian armored vehicles moves along a highway in Russian-occupied Crimea. An estimated 100,000 troops have massed at the border with Ukraine 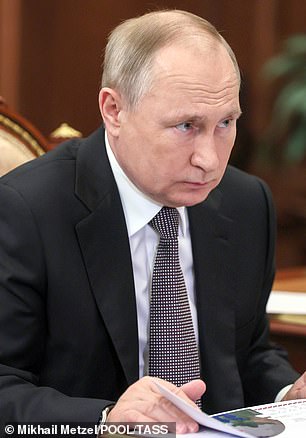 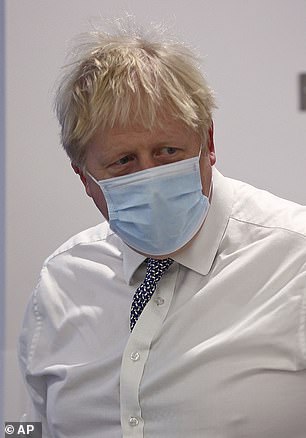 Boris Johnson (right) has delivered a stark message to Vladimir Putin (left at the Kremlin last night) as he admitted that the prospects of averting a confrontation in the area were ‘gloomy’. 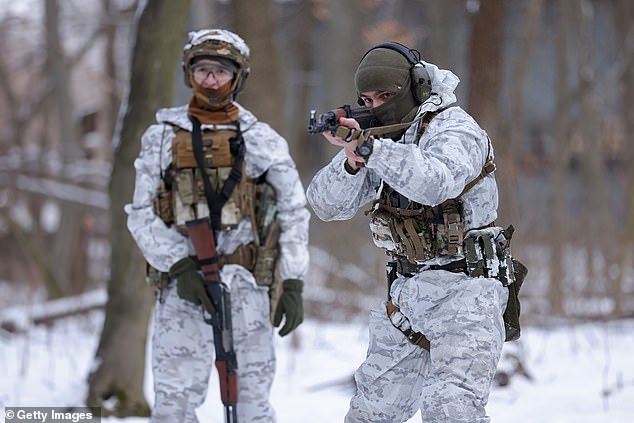 The Prime Minister and the US President met virtually with the leaders of Nato, the EU, Italy, Poland, France and Germany last night as they hoped to avert what Mr Johnson warned would be a bloody and protracted conflict for Moscow.

Downing Street said they stressed diplomatic discussions with Russia remains the first priority, but said the nation would be hit with ‘swift retributive responses’ if a ‘further Russian incursion into Ukraine’ takes place.

Mr Heappey said today: ‘Where we see Russian plans we will expose them, such as their ”false flag” attacks and plots for puppet regimes.

‘As I write, we are becoming aware of a significant number of individuals that are assessed to be associated with Russian military advance-force operations and currently located in Ukraine.’ 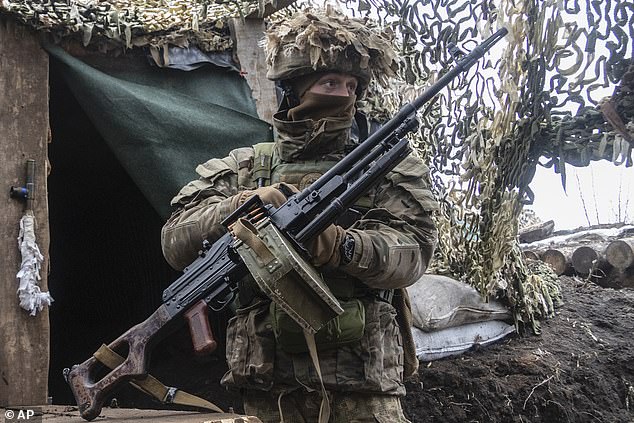 A Ukrainian soldier stands at the line of separation from pro-Russian rebels, Donetsk region, as fears grow of an invasion 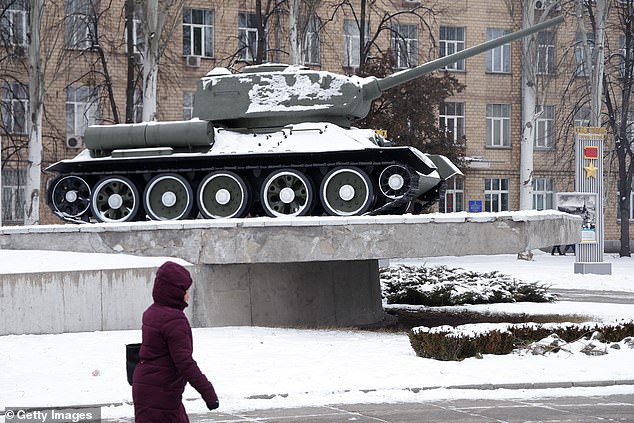 Ukraine was a part of the Soviet Union until it was disbanded. A young woman walks past a World War II-era Soviet T-34 tank at an outdoor commemorative display extolling the battles and victories of the Soviet Red Army in Kyiv.

Under efforts to deter Russian ‘aggression’, Mr Biden said the leaders discussed preparations to ‘impose severe economic costs’ against Moscow while seeking to ‘reinforce security on the eastern flank’.

The Pentagon put 8,500 US troops on heightened alert, preparing them for a possible deployment to reassure Nato allies amid rising tensions.

Earlier in the day, Mr Johnson warned in an interview that ‘gloomy’ intelligence suggested Russia was planning a lightning raid on Kyiv, as British staff and their families began leaving the Ukrainian capital.

The Prime Minister warned Russian President Vladimir Putin, who in 2014 led a Russian annexation of Crimea from Ukraine, that a fresh invasion would be a ‘disastrous step’.

‘The intelligence is very clear that there are 60 Russian battle groups on the borders of Ukraine, the plan for a lightning war that could take out Kyiv is one that everybody can see,’ Mr Johnson said.

‘We need to make it very clear to the Kremlin, to Russia, that that would be a disastrous step.’

He warned that the people of Ukraine would resist any invasion and ‘from a Russian perspective, (it) is going to be a painful, violent and bloody business’, he said.

‘I think it’s very important that people in Russia understand that this could be a new Chechnya.’

‘The leaders agreed that, should a further Russian incursion into Ukraine happen, allies must enact swift retributive responses including an unprecedented package of sanctions,’ Downing Street said following the discussions lasting over an hour. 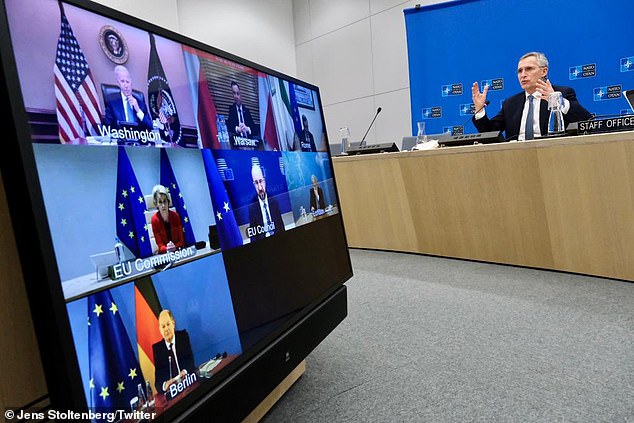 An online meeting between  the US President, UK Prime Minister and the leaders of France, Germany, Italy, Poland, the European Union and Nato (Jens Stoltenberg pictured)

Mr Johnson, according to No 10, emphasised the need to support Ukraine’s defences ‘against the full spectrum of malign Russian activity’.

The United States also ordered the families of all American personnel at the US Embassy to leave the country in response the the risk of an invasion.

But the European Union’s foreign policy chief Josep Borrell said: ‘We are not going to do the same thing’ and Ukraine’s foreign ministry spokesman Oleg Nikolenko said the US decision was ‘a premature step’ and a sign of ‘excessive caution’.

Downing Street said British combat troops would not be used to defend Ukraine.

The Prime Minister’s official spokesman said around 30 British diplomats, including the ambassador, remained in Ukraine.

The Foreign Office said: ‘Some embassy staff and dependants are being withdrawn from Kyiv in response to the growing threat from Russia.

‘The British Embassy remains open and will continue to carry out essential work.’

Putin may avoid an incursion of Ukraine because it could damage his popularity, the former head of the British Army said this morning.

Lord Dannatt believes ‘the Ukrainians will fight and fight hard’, and that would mean Russian fatalities and casualties.

He told Times Radio: ‘He is very powerful but he does not have universal popularity. There is quite an opposition movement to him.

‘If Russian television screens get filled with body bags and casualties coming back from a bloody incursion in Ukraine, that will damage his popularity and damage his standing as opposed to boosting his position – so he has got a calculation to make.’

Meanwhile Gordon Brown has said a show of strength is needed to face down Putin. The former prime minister recalled that, during his dealings with Mr Putin, the Russian leader had said he ‘would not co-operate in any way’.

He told ITV’s Good Morning Britain: ‘You have to be able to stand up to him. Remember the assassinations on British soil? He was going to assassinate other people if we hadn’t stood up to him. The only thing that Putin understands is strength.

‘Perhaps belatedly, the right thing to do is a show of strength from Nato and unity from Nato, and that is something that has got to be fought for and making it clear that we will not accept Russian incursions.

‘I think it will be financial and economic sanctions that are going to have to be so severe that the Russian autocrats, the Russian oligarchs and Putin himself and his government is affected by them.’

New Orleans clings to the ‘play-in’ option by beating Indiana

Bitcoin To Take The Entire Crypto Market’s Capitalization Down To $250 B? 2021

Bitcoin To Take The Entire Crypto Market’s Capitalization Down To $250 B? 2021