An emergence of new respiratory viruses means a ‘pretty miserable winter’ is ahead for the UK with further lockdowns a possibility, scientists have warned.

Professor Calum Semple, member of the Scientific Advisory Group for Emergencies (Sage), which advises the Government, has said that children and elderly people will be vulnerable to endemic viruses at the end of the year.

Another health expert and Government advisor warned that there may be the need for winter lockdowns if hospitals become ‘overwhelmed’ at some point.

On Sunday morning, Professor Semple told Times Radio: ‘I suspect we’ll have a pretty miserable winter because the other respiratory viruses are going to come back and bite us quite hard. But after that, I think we’ll be seeing business as normal next year.

‘There’s a sting in the tail after every pandemic, because social distancing will have reduced exposure, particularly of pregnant women and their newborn babies, they will have not been exposed to the usual endemic respiratory viruses. 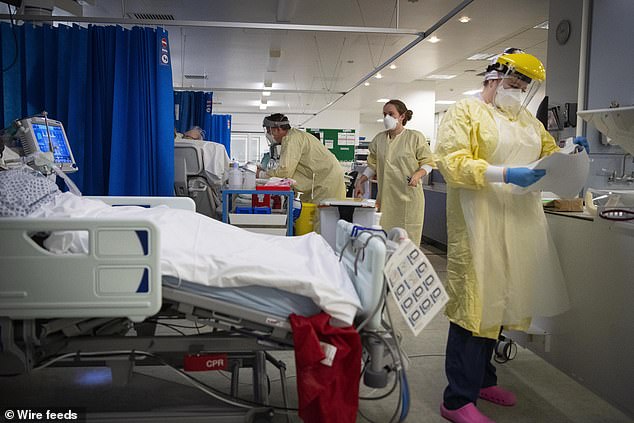 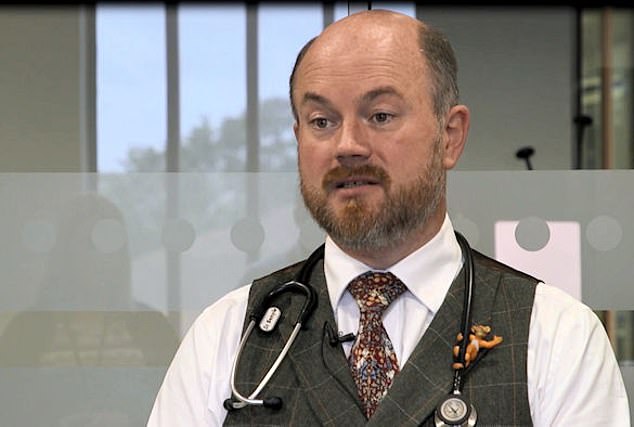 Professor Calum Semple, member of Sage, which advises the Government, has said that children and elderly people will be vulnerable to endemic viruses at the end of the year

‘The protection that a pregnant woman would give to their unborn child has not occurred.

‘So we are going to see a rise in a disease called bronchiolitis, and a rise in community acquired pneumonia in children and in the frail elderly, to the other respiratory viruses for which we don’t have vaccines.

‘So that’s why we’re predicting a rough July, August and then a rough winter period.’

Professor Semple called it the ‘fourth wave winter’ but added it would be much milder than the previous ones.

Dr Susan Hopkins, the strategic response director for Covid-19 at Public Health England (PHE) also warned of a possible rise in cases at the end of the year.

She told the BBC’s The Andrew Marr Show: ‘We may have to do further lockdowns this winter, I can’t predict the future, it really depends on whether the hospitals start to become overwhelmed at some point. 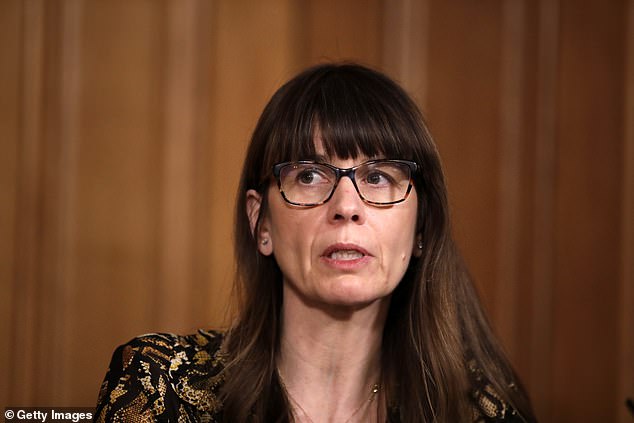 Dr Susan Hopkins, the strategic response director for Covid-19 at Public Health England (PHE) has warned of a possible rise in cases and said more lockdowns could be needed this year

‘But I think we will have alternative ways to manage this, through vaccination, through anti-virals, through drugs, through testing that we didn’t have last winter.

‘All of those things allow us different approaches rather than restrictions on livelihoods that will move us forward into the next phase of learning to live with this as an endemic that happens as part of the respiratory viruses.’

It comes as thousands of Covid-19 jabs are being administered at stadiums and football grounds in London which were transformed into mass vaccination centres.

Smaller events are also taking place in local community venues in a drive to vaccinate as many Londoners as possible.

Mayor of London Sadiq Khan said he was ‘delighted’ to visit Chelsea’s ground at Stamford Bridge. 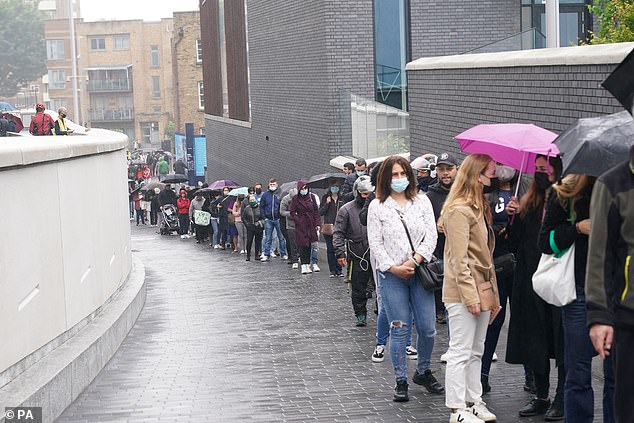 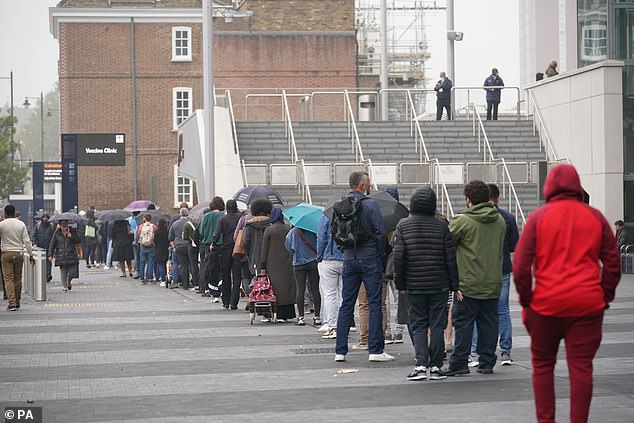 The NHS is braced for high demand for the jabs as anyone in England over the age of 18 can now book a Covid-19 vaccination jab. Pictured: queues at Tottenham Hotspur’s stadium

Chelsea FC had 6,000 Pfizer vaccines to administer on Saturday, with the jab being offered to all adults over the age of 18 yet to receive a first dose, as well as those awaiting a second Pfizer dose.

Mr Khan said: ‘Chelsea FC, West Ham at the London Stadium, Tottenham Hotspur FC, Charlton Athletic FC, are hosting large-scale pop-up clinics, and there are a huge number of events taking place in local community centres, so that as many people as possible get convenient access to the life-saving Covid jabs.

‘You do not need to be registered with a GP to get vaccinated.

‘It is great news that more than eight million doses of the life-saving Covid-19 vaccine have been given to Londoners, and now all adults over the age of 18 are able to get the jab. 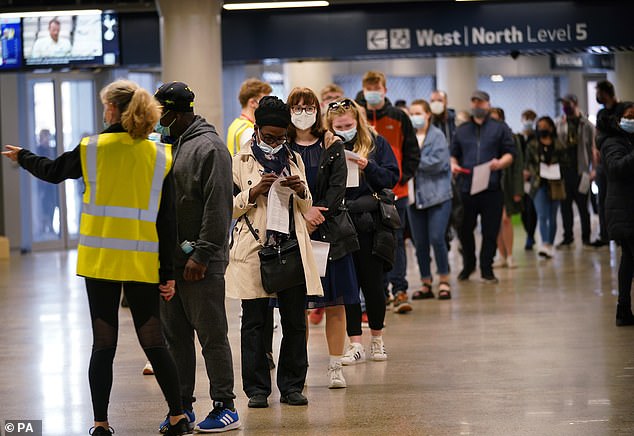 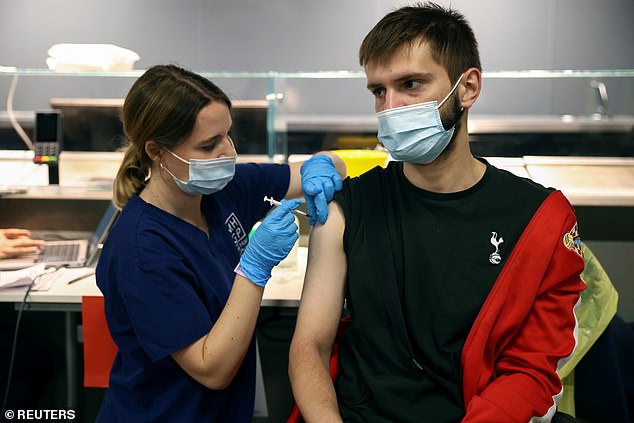 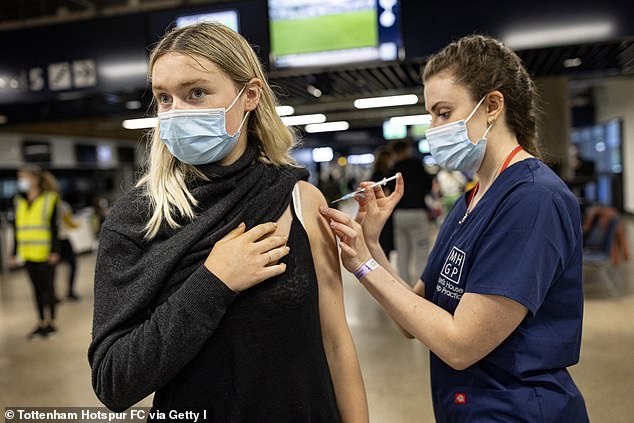 ‘We are seeing the big difference that the vaccine is making in our fight against the virus, so I strongly urge all adult Londoners to book their appointments or attend a walk-in centre as soon as possible, and to ensure you get your second dose.’

The ‘super pop-ups’ are expected to attract thousands of young Londoners on ‘super Saturday’ who are now eligible to receive their first Covid jab.

A huge queue was in place at the Olympic Stadium in Stratford, east London, as people got in line to get their jab.

Vaccines minister Nadhim Zahawi tweeted: ‘This is an incredible effort by the whole London team.

‘Happening across the City at Spurs, Arsenal, Charlton and West Ham too. Come on London let’s get vaccinated!’