Mandatory vaccines for NHS and social care workers are set to be scrapped, it was revealed last night.

The decision to scrap the controversial policy comes amid warnings of crippling staff shortages if the plan was imposed on NHS and social care workers.

Health Secretary Sajid Javid is on Monday expected to meet ministers on the Covid-Operations Cabinet committee to finalise the U-Turn, reported the Telegraph.

The mandatory jab requirement was meant to come into force on April 1, meaning this Thursday would have been the last day staff could book in for a jab. On Friday those without jabs would have faced dismissal warnings and been asked to work out their notice periods until March 31.

But now, ministers are set to scrap the plan amid fears it could force the NHS to sack around 80,000 staff who remain unvaccinated. One in 20 NHS staff – the equivalent of 77,591 people – have still not had their first jab. In London, one in ten staff are unvaccinated.

Martin Marshall, Chairman of the Royal College of GPs, said compulsory vaccination for health professionals was ‘not the right way forward’. 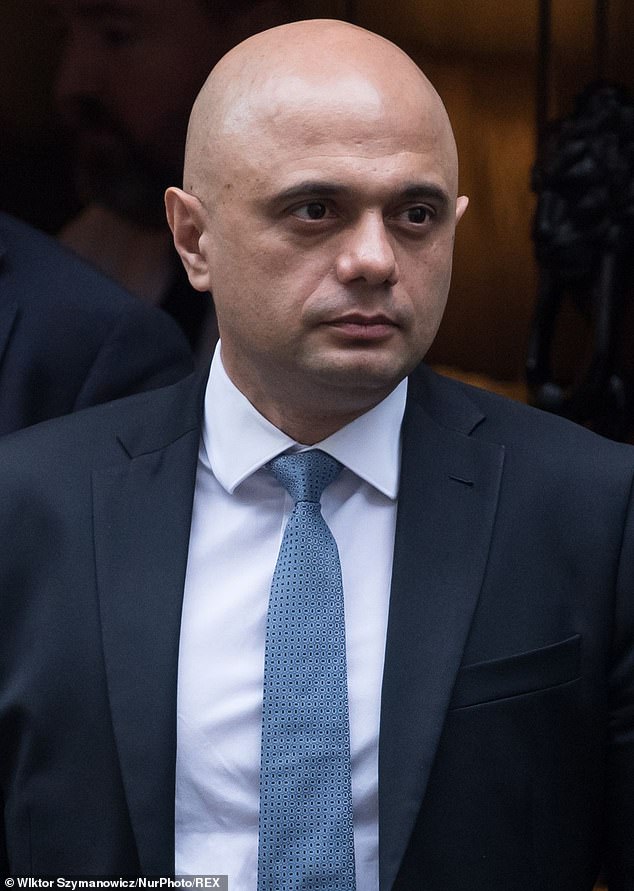 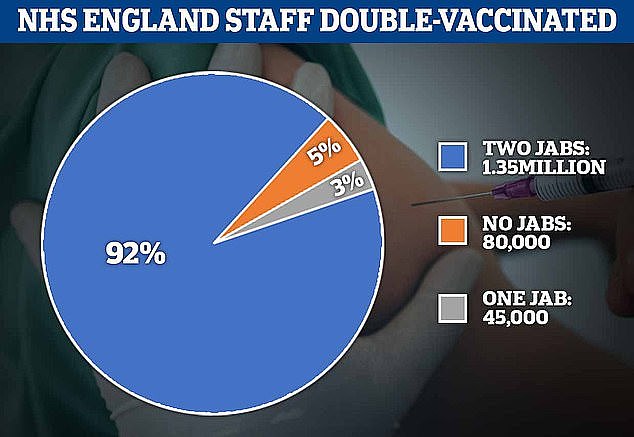 But now, ministers are set to scrap the plan after one in 20 NHS staff – the equivalent of 77,591 people – have still not had their first jab. In London, one in ten staff are unvaccinated

Under the new rules, care home staff, who were required to be double jabbed or lose their jobs in November, are expected to return to work in the sector. After the mandatory vaccination laws came into effect last year, around 40,000 people lost their jobs.

Care home bosses said the government’s indecision over mandatory jabs had ‘devastated our workforce and brought providers to their knees’.

A senior government source told the Telegraph that ministers are U-turning on the mandatory jabs policy because the Omicron variant is much more mild than previous strains.

‘Omicron has changed things,’ the source said. ‘When we first introduced the policy, it was delta that was the dominant variant. That was very high risk in terms of how severe it was.

‘For omicron, while it is more transmissible, all the studies have shown it is less severe. That has changed the conversation about whether mandatory jabs are still proportionate.’

Chris Hopson, chief executive of NHS Providers, said: ‘There were always two risks to manage here: the risk of Covid cross-infection in healthcare settings and the consequences of losing staff if significant numbers choose not to be vaccinated.’

Prior to the reported U-turn, NHS managers had been advised they could move unvaccinated medics from the frontline into roles which do not involve direct patient contact.

Bosses wouldn’t have to help staff find ‘suitable alternative employment’ and redundancy payments would not be made to those who are dismissed.

The Care Quality Commission (CQC) health watchdog has said it will not take action against hospitals which decide it is safer to keep unvaccinated staff in place. 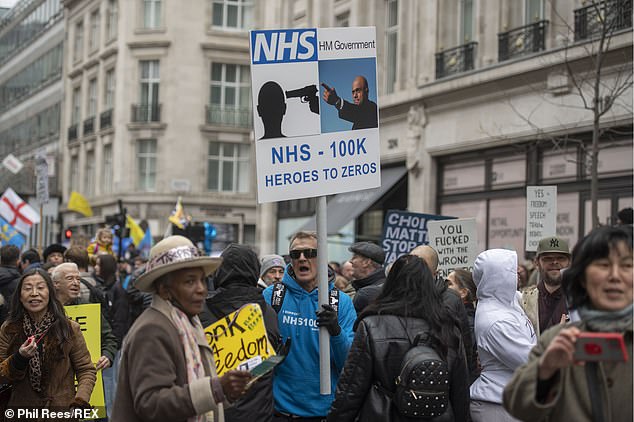 Mandatory vaccines for NHS and social care workers are set to be scrapped, it was revealed last night. Pictured: Demonstrators march through London to protest against mandatory vaccinations for NHS staff on January 22 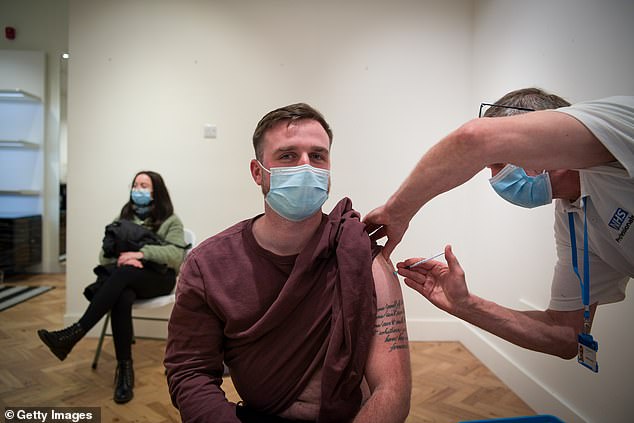 Last week Mr Javid said the policy was ‘under review’ and he did not want to lose a single worker to the mandate.

He hinted it may be scrapped because Omicron was less severe than Delta, meaning unjabbed workers posed less of a threat to patients.

Meanwhile, NHS chief executive Amanda Pritchard told a board meeting on Thursday that the compulsory jabs policy posed ‘a real element of risk’ to services.

She said that aiming for universal uptake was ‘of course the right’ objective, but added: ‘At the same time, there is a real element of risk in this that local teams are facing and there’s a risk for our national level targets including the expansion of the workforce, particularly in nursing.’

Speaking about the U-turn over mandatory jabs for NHS and social care staff, Nadra Ahmed OBE, who chairs the National Care Association, told the Telegraph: ‘This decision epitomises the lack of foreside by the ministers in choosing to drive the implementation of this policy without producing impact assessment prior to taking it to the vote.

‘Every parliamentarian who voted for it in social care needs to take responsibility for the loss of staff our sector have suffered because of an ill-thought out policy. Social care has been used as a pilot which has devastated our workforce and brought providers to their knees.’

Mike Padgham, chairman of the Independent Care Group for York and North Yorkshire and boss of Saint Cecilia’s Care Services said: ‘It feels like a bit of a slap in the face.

‘I like to think that all those staff that lost their jobs would get them back again, because we need them. It’s what we argued in the beginning – the vaccine was a good thing, but it shouldn’t be mandatory.

‘Common sense seems to have prevailed now, but there’s been a lot of heartache and sleepless nights for people – unnecessarily – in the midst of a pandemic, when we all said at the beginning that this wasn’t the right approach.

‘This just shows that they don’t understand the difference between the NHS and social care sectors and both need to be strong to support each other. ‘ 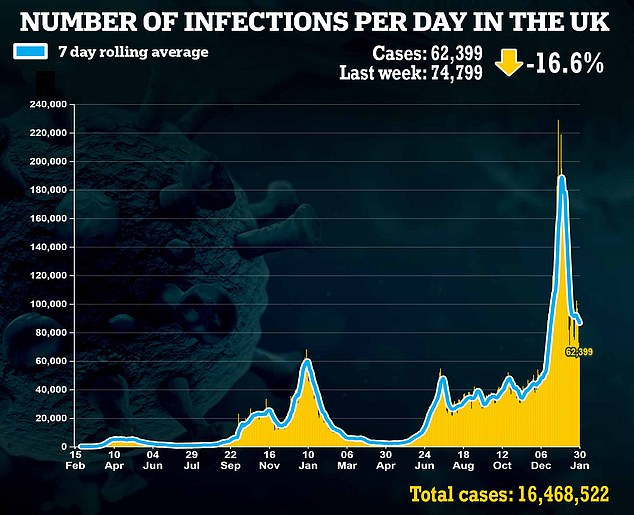 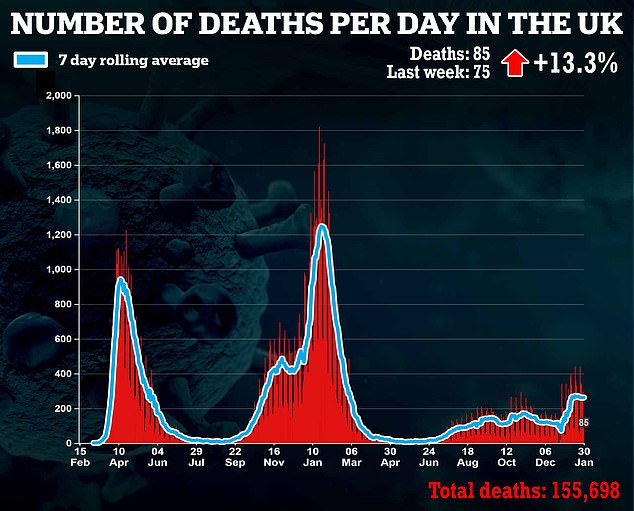 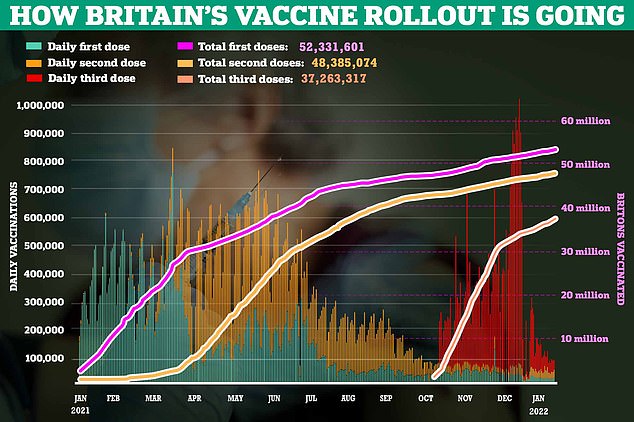 ‘We fully recognise there are concerns that the introduction of mandatory vaccination rules risk exacerbating existing staff shortages.

‘Hospital trusts may need to make difficult risk-based decisions in order to determine the safest possible approach in different circumstances.’

Mr Javid has previously expressed his disagreement at NHS workers who are against mandatory vaccination and urged the public to get boosted.

He said: ‘I understand it, and obviously we have to weigh all that up for both health and social care, and there will always be a debate about it.’

Mr Javid said earlier this month it was the ‘duty’ of NHS workers to get the jab in order to protect patients, and insisted that he does ‘not want to see anyone have to walk away from their job’.

‘This is all about patient safety, we know vaccines work, we know that they reduce the risk of you being infected, so it reduces the spread of an infection,’ he told BBC Radio 4’s Today programme.

‘People whether they are in care homes or a hospital bed, they are particularly vulnerable to this virus, it could be fatal. It is our duty to everything we can to protect them.’

The Royal College of Nursing had previously said the move toward mandatory vaccination was ‘an act of self-sabotage’, while the Royal College Midwives warned compulsory vaccines will ‘only see staffing levels fall further’ and have a ‘catastrophic impact’.

And the NHS Confederation, which represents NHS trusts in England, said hospitals’ frontline staff would be pushed out of their roles, leading to ‘more gaps in capacity at a time of intense pressure and patient demand’. 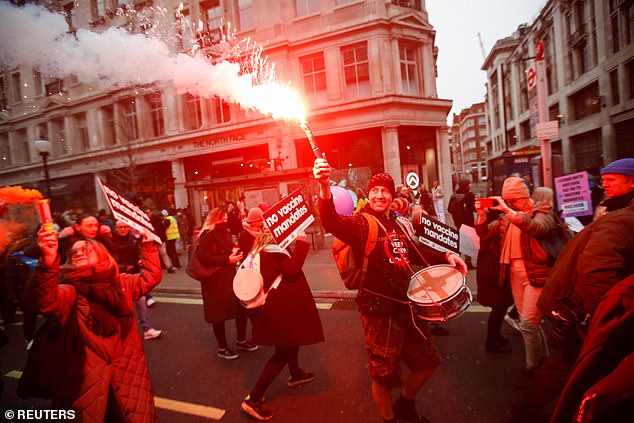 Meanwhile, the Royal College of Obstetricians and Gynaecologists has warned the mandate could damage care for mothers and babies. It said even before the pandemic there was a shortfall of 500 doctors and 2,000 midwives on maternity wards.

President Dr Edward Morris said: ‘Maternity services require specialist staff whose skill cannot be replicated elsewhere in the NHS. The risk of doctors, midwives or maternity support workers being dismissed from frontline roles because they are unvaccinated creates a far greater risk to maternity services’ ability to deliver safe, high-quality care for women.’

It comes as Britain’s daily Covid cases fell 16 per cent on Sunday to their lowest level in a month and a half — while deaths rose slightly.

Latest Government statistics showed another 62,399 infections were recorded over the last 24 hours, down from 74,799 positive swabs last Sunday.

This marked the lowest daily tally since December 14 when Omicron was taking off across the UK, and the sixth day in a row that infections have dropped week-on-week.

But Sunday’s cases update does not include new infections from Northern Ireland, which has likely slightly skewed the statistics.

Another 85 deaths involving the virus were also recorded on Sunday, up 13 per cent in a week. And in England latest hospitalisations ticked down eight per cent after 1,342 admissions were registered on January 28.

Britain’s Covid outbreak has been gradually ticking downwards since early January, giving ministers the confidence to lift most Covid curbs aimed at limiting the spread of the virus.

Cases did appear to plateau in recent days amid the emergence of a version of Omicron that may be slightly more transmissible (BA.2), but scientists have not raised concerns over the mutant strain.

Expanding the battle against the virus, Britain on Sunday opened its vaccination drive to five and 11-year-olds who are vulnerable to the virus or live with some one who is. Eligible youngsters are being offered two doses.

“There is no need to panic” .. Is the President of Ukraine ignoring a war for which there are reasons? | Politics news