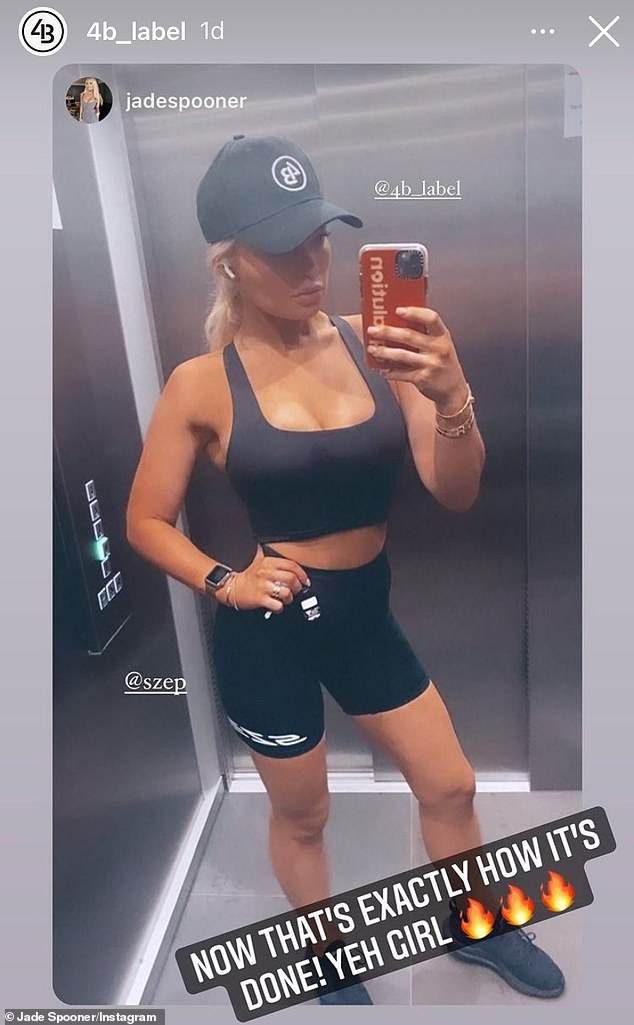 
A leading Sydney nutritionist who is friends with Sam Burgess has been spotted wearing the former NRL star’s clothing label.

Jade Spooner, the founder of science-based healthy eating program Equalution, posed for an elevator selfie wearing a 4B label cap.

The activewear brand was launched earlier this year by Burgess and his three siblings, older brother Luke and younger twin brothers, Thomas and George.

Ms Spooner looked casual in the picture – which was reshared by the brand on Instagram – wearing an activewear set with her hair tied back in a bow ponytail.

Jade Spooner, the founder of science-based healthy eating program Equalution, posed for an elevator selfie wearing a 4B Label cap

The woman in the photo, Jade Spooner (pictured), is the founder of science-based healthy eating program Equalution

The photo comes after the blonde shared a gushing post about the South Sydney Rabbitohs legend for his 32nd birthday.

‘Happy Birthday to this one of a kind,’ she wrote alongside the snap of the pair together.

Burgess split from his wife and the mother of his two children in late 2019 and is now defending charges of assaulting and intimidating her father Mitchell Hooke.

Ms Spooner has previously been pictured alongside Burgess’ mother Julie and socialite Tori May – who is in a relationship with Sam’s older brother Luke.

The businesswoman founded nutrition program Equalution in January 2015 and describes herself on her website as an author and entrepreneur.

Embattled footy star Sam Burgess has celebrated his birthday with a leading Sydney nutritionist (pictured, together) following his split from his wife Phoebe

Burgess is fighting claims he threatened her father at the Hooke family home in the New South Wales Southern Highlands shortly after their split.

Phoebe – a 31-year-old social media influencer – also admitted leaking a damning 50-page police statement she made about Burgess to a newspaper which published allegations against him of domestic violence and drug misuse.

At the start of her evidence Phoebe was asked to clarify the status of her relationship with 31-year-old Burgess. ‘I’m his ex-wife,’ she told Moss Vale Local Court.

Under cross-examination she was questioned about whether she was still Phoebe Burgess or had reverted to calling herself Phoebe Hooke.

‘As long as my children are Burgess I will always be Burgess,’ she said.

The South Sydney Rabbitohs legend split from his wife Phoebe (pictured, together) in 2019 after first separating in late 2018

Mitchell Hooke, pictured with daughter Phoebe, claims Burgess stood over him in a menacing manner, called him a ‘piece of s***’ and said ‘I’m going to get you’ during a confrontation at the Hooke family home. He says he feared being hit by the footballer

The Burgesses, who married in December 2015 and separated in October last year, have two children: Poppy, who turns four in January, and Billy who turns two this month.

Burgess has pleaded not guilty to intimidation and common assault arising from the alleged incident at the Hooke home on October 19 last year.

Mr Hooke claims Burgess stood over him in a menacing manner, called him a ‘piece of s***’ and said ‘I’m going to get you’.

He says he feared being hit by the footballer.

This picture of the former couple is still on Phoebe Burgess’ Instagram account. The Burgesses married in December 2015 and separated in October last year

Covid UK:New cases DOUBLE in a week with 36,804 more infections

Covid UK:New cases DOUBLE in a week with 36,804 more infections