A woman who had ten miscarriages and three stillbirths is determined to become single mum using a surrogate in Greece – months after she ‘cried herself to sleep’  because her relationship broke down while they were losing their 13th baby.

Samantha Rowe’s eight-year nightmare began in 2014 when she gave birth to her son Cooper, who was born on Valentines Day at just 21 weeks – too early to survive outside the womb.

Hudson was stillborn at 19 weeks, identical twins Emma and Zoe tragically passed away in 2015 because they were tangled in their umbilical cords, and in 2018 little Noah came into the world too soon at 22 weeks.

Each year was dotted with miscarriages, so the Melbourne woman and her ex fiancée forked out $40,000 to use donor eggs in what they thought was a ‘miracle solution’ to their problem, but were left heartbroken when that pregnancy lasted only a week.

The now 42-year-old told Daily Mail Australia she was overjoyed when her pregnancy test came back positive for the 13th time in November 2020 but, eight weeks later, she began to bleed. 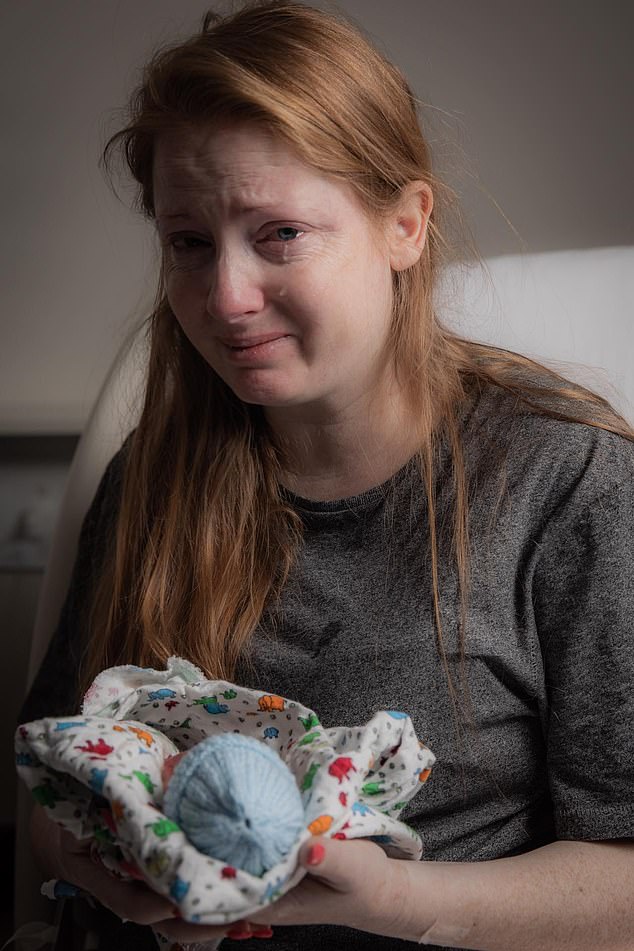 Samantha Rowe is pictured holding her son, Noah. The little boy was born at just 22 weeks in 2018 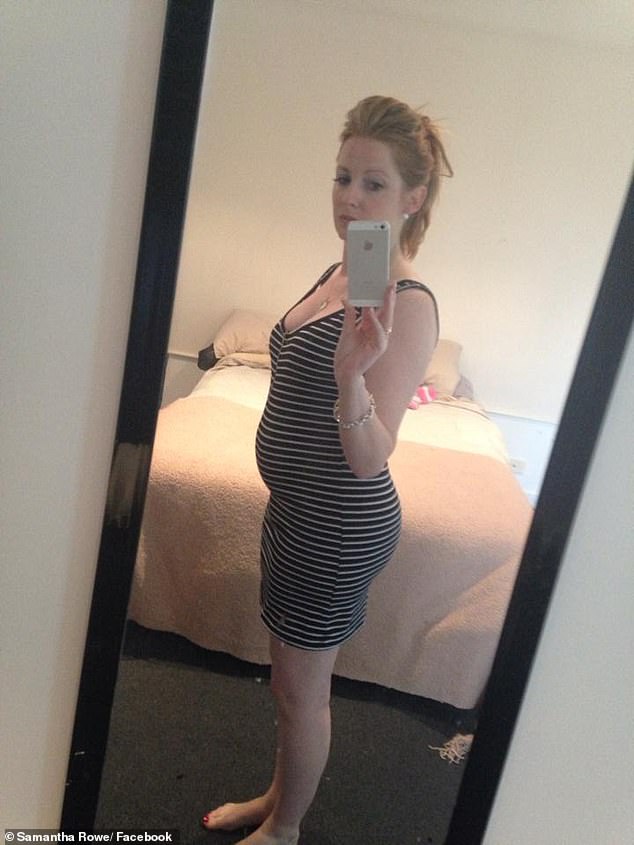 Ms Rowe was pregnant with Cooper in 2014, but the baby died because he was born too early, at 21 weeks

As she lost her baby, her relationship with her fiancée broke down.

‘I was heartbroken,’ she said.

Ms Rowe said the breakup was possibly worse than losing a baby because, even after losing so many babies, they still had each other.

‘I thought we were a team, but then I lost him as well and I was alone.’

Unable to afford the rent for their home on her own, the devastated woman was forced to pack the house up, including eight years’ worth of baby items, and move into a small two-bedroom apartment. 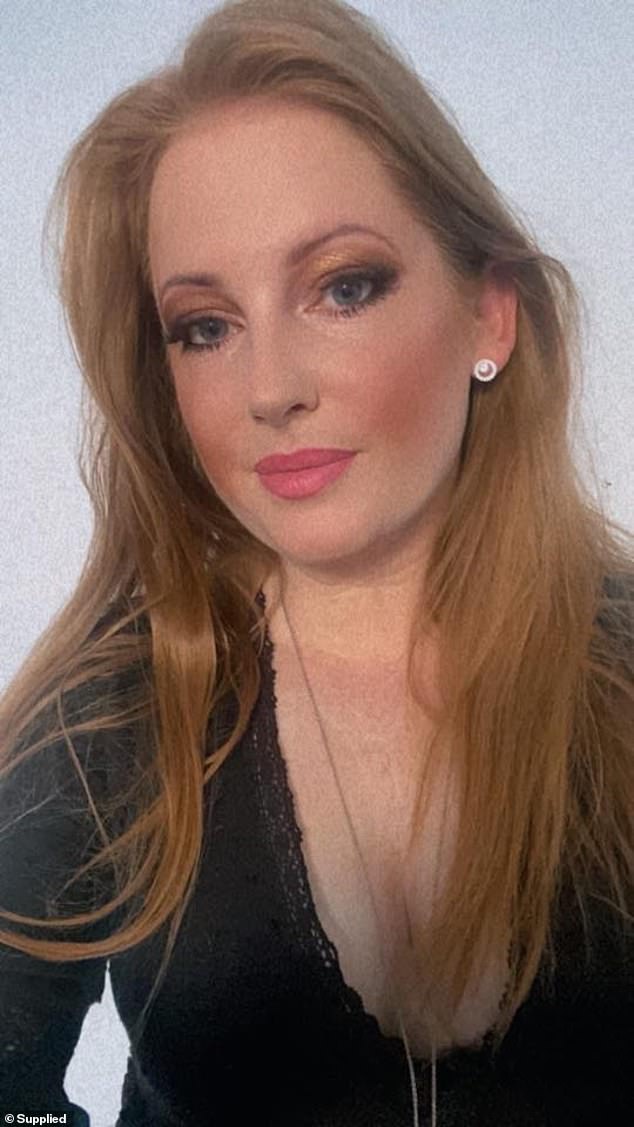 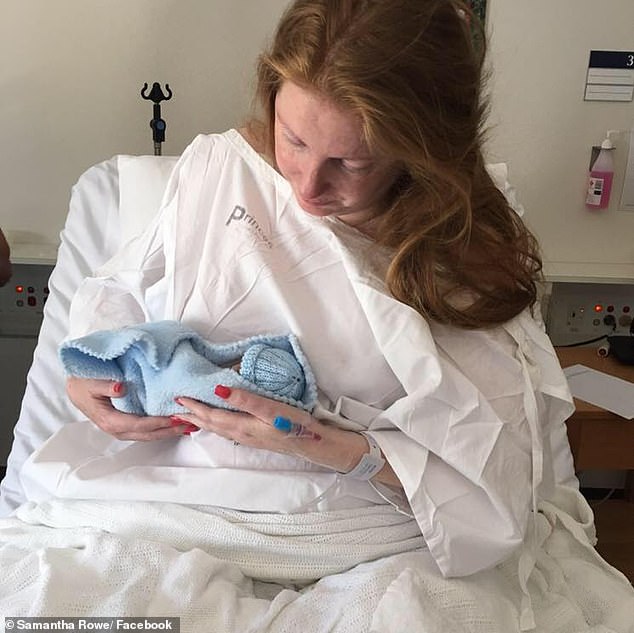 Samantha is pictured with baby Noah in 2018. She still buys him birthday presents each year and donates the gifts to charity

It was during one of Melbourne’s Covid-19 lockdowns and, while she managed to hold on to her job as an executive assistant at a disability service during the pandemic, she cried herself to sleep for three months.

‘I thought long and hard about how willing I was to have a baby, and about whether I was OK not to pursue it, and for this to be my life,’ she said.

‘But longer I sat with that, the more unhappy I became.’

While using a surrogate as a single woman wasn’t the life she dreamed about, Ms Rowe thought ‘if I had $120,000 in the bank to pay for a surrogate baby, I’d do it’.

Surrogacy Australia put her in touch with a group of couples and single parents who used a program in Greece, which is designed to help women who are unable to have their own children. 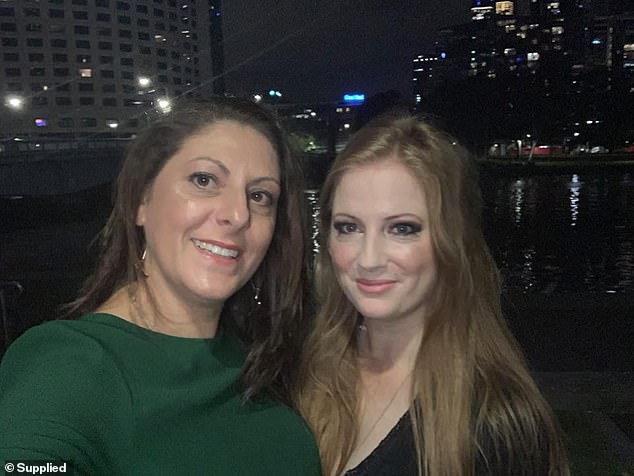 Samantha asked her best friend Eleni (pictured left, with Samantha) to develop biscuits for her boxes 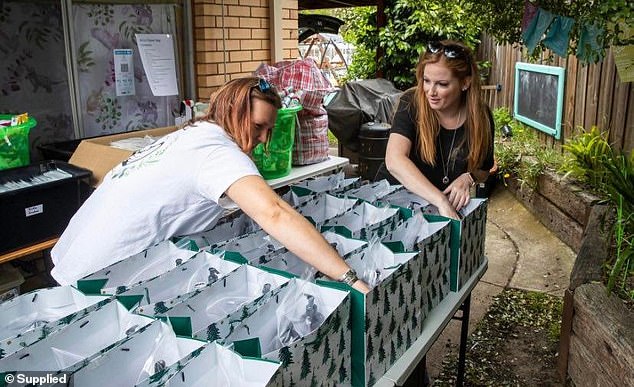 Samantha donates money, time and gifts to charities. She is pictured volunteering to help compile NICU cheer packages for parents with premature babies

‘They had a meetup and I met these families who all went to Greece and came back with their bundles of joy and had no regrets,’ she said.

‘It reignited the fire in my belly, even though it costs a truckload.’

Ms Rowe bought an investment property before she met her ex, and has to refinance it to pay the $120,000 surrogacy fees.

The prospective mum will use donor eggs and sperm, which means the child won’t genetically be hers, but ‘I’m pretty confident I’ll love it anyway,’ she added.

Her application could be processed by the Greek courts as early as February, which mans she could finally have a baby in her arms in little more than a year.

In the meantime, Ms Rowe still celebrates the birthdays of her five children who were stillborn. 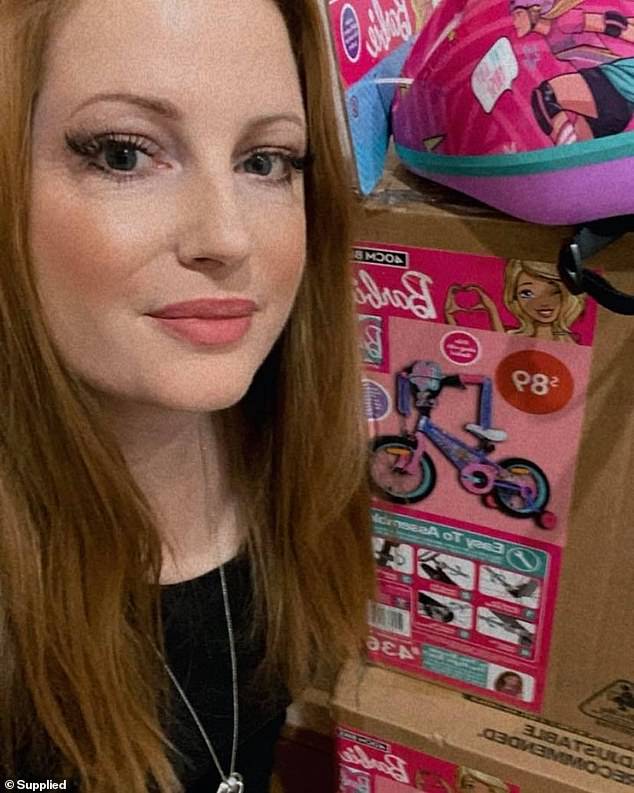 Samantha bought her twin girls Emma and Zoe bikes and helmets for their birthday. She donated them to charity 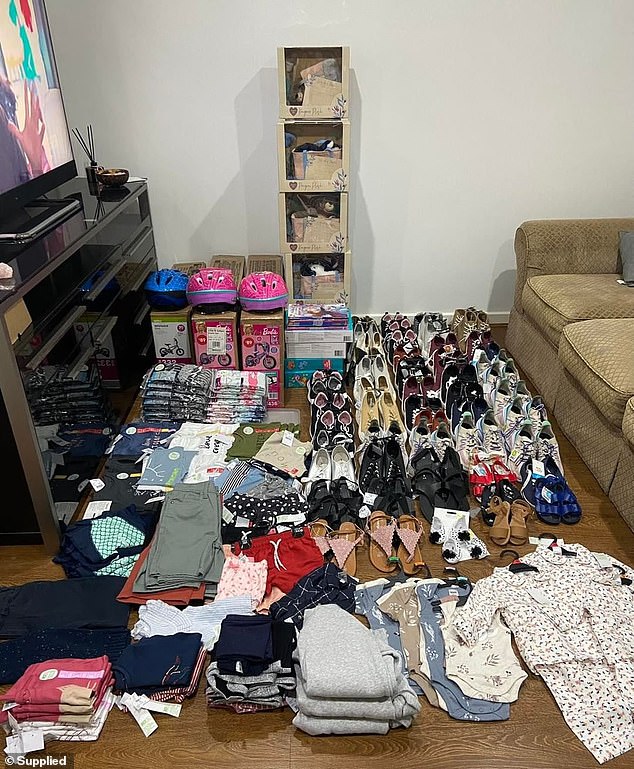 Pictured: Gifts for children in need. Samantha buys items on sale throughout the year and donates them to charity

She buys them birthday presents, depending on how old they would be turning, and donates the gifts to children in need.

‘It feels very special to be able to buy Noah his first bike and then know that it will go to someone who really needs it,’ she said.

‘It doesn’t take away the pain but it does heal my heart a little.’

The hopeful mum also spends about $1000 each year on toys and gifts to donate to kids whose families can’t even afford shoes or school uniforms, at Christmas.

To help other families who have experiences infant loss, Ms Rowe set up her business Memories of an Angel. 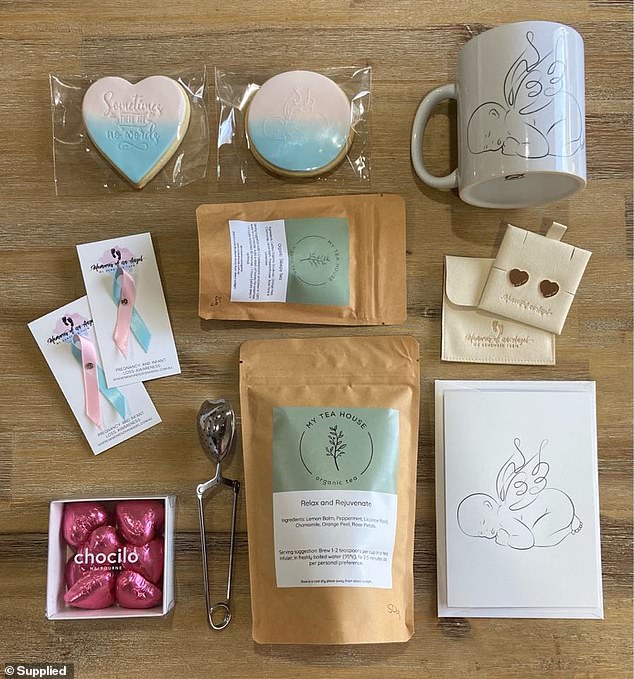 Pictured: A sample of the products included in the gift boxes. She carefully selected each item

Her company has provided ribbons all over the world for stillbirth organisations, she was contacted by a cemetery in South Australia that wanted to send thousands of ribbons to every family who had lost a child, and ships globally every week.

The company website is also being redeveloped to include an online store with mementos and keepsakes for deceased infants.

But her biggest achievement will be launching a care package for parents who lose a baby. 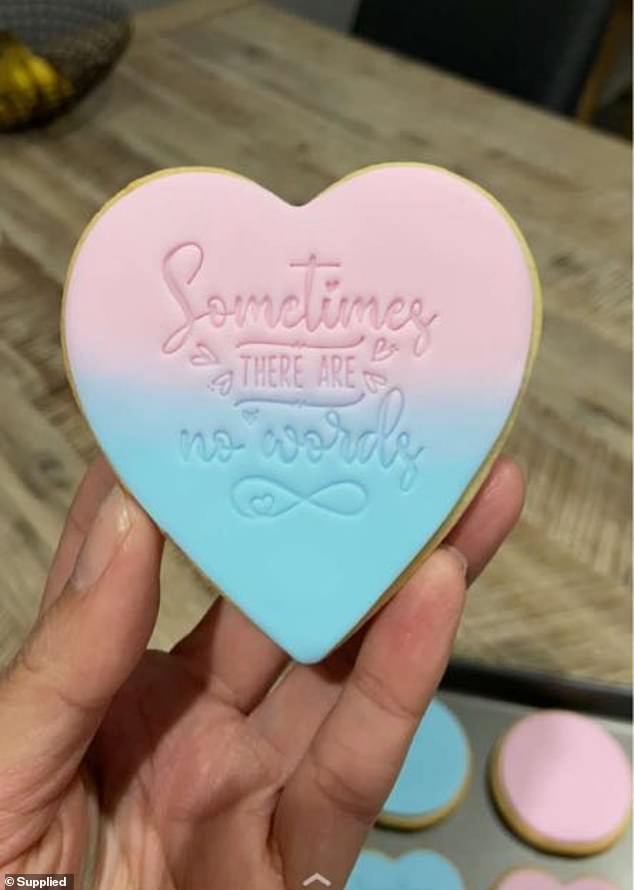 Pictured: One of the biscuits her best friend developed to be included in the gift boxes for parents who experience infant loss

‘People can either buy a gift box to donate to a hospital, or they can nominate an individual to send the box to.’

Ms Rowe explained the box will include a note with the name of the baby who dies, ‘because parents who experience loss often don’t get to see their child’s name in writing’.

‘Mums who go home without a baby often leave the hospital with nothing, so I wanted to focus on that – the box needed something that will bring them comfort and acknowledges them as a mother.

Ms Rowe said the launch has been delayed because of Covid, but she hopes to launch it early next year.

2013: Found out she was pregnant with Cooper. Pregnancy ran smoothly until she suddenly found herself in severe pain at 21 weeks.

Doctors sent her home twice, but after Ms Rowe passed a blood clot, she was taken to hospital where doctors told her they didn’t know what was going on.

The expectant mother eventually went to the bathroom and realised she was in labour because baby Cooper’s foot was coming out. Died on Valentines Day in 2014.

2015: Hudson was born at 19 weeks and six days because Samantha had an infection after doctors didn’t completely remove Cooper’s body from her uterus.

She was given antibiotics and they removed everything from her uterus again, but didn’t completely recover from the infection by the time she was pregnant with Hudson.

2015: Found out she was pregnant with twin girls, Emma and Zoe.

The pregnancy was high-risk because, while they had their own umbilical cords, the pair shared an amniotic sac and the same placenta.

In August 2015, Emma and Zoe became entangled in their cords and died at 15 weeks.

2018: Opted for IVF and found out she was expecting baby Noah.

‘We were sure he was our miracle baby,’ she said.

They were told that if Noah lived beyond 23 weeks. He was born at 22 weeks.

2019: Used a donor egg, but the pregnancy only lasted seven days.

Podcast Mexico 2022: 34 million Mexicans will listen to a podcast per month

Biden bitten by own blunders

Biden bitten by own blunders