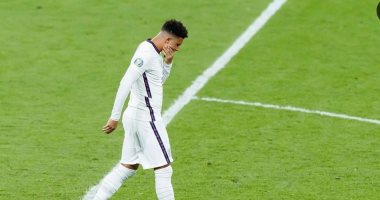 Jadon Sancho has left the England national team camp and will miss the two matches against Andorra and Poland in the World Cup qualifiers in Qatar, and returned to his Manchester United team injured.

Sancho, 21, suffered a minor injury in training earlier this week, and was forced to miss the team’s match against Hungary, which ended with the Three Lions winning 4-0..

According to the Metro newspaper, after undergoing further tests, England made a decision to allow Sancho to return to his club ahead of schedule.

And according to an official FA statement, he is likely to recover in time to face Newcastle next weekend..

Doubts about Sancho’s fitness increase Cristiano Ronaldo’s chances of making an appearance for Man United from the start against Steve Bruce’s side as he looks to restart his United career after a 12-year absence..

Ronaldo, 36, arrived in Manchester yesterday, and will train with his new teammates for the first time next week, once he completes the days of self-isolation..

With Marcus Rashford still injured and Dan James sold to Leeds, it looks increasingly likely that Ronaldo will play a role in Ole Gunnar Solskjaer’s side from the start..

Ronaldo received an extra boost, earlier this week, when it was confirmed that the Premier League had given United special permission to allow the five-time Ballon d’Or winner to take back his legendary No. 7 shirt from Edison Cavani, who will wear the No. 21 in his stead..

Ronaldo said: “I wasn’t sure if the number seven shirt could be obtained again, so I would like to give a big thank you to Cavani for this wonderful gesture.”.

Medical tips for cleaning and cleansing the colon, most notably foods rich in fiber