Millionaire residents of Sandbanks are battling developers over plans to build a ‘soulless’ block of flats on the site of an historic hotel where inventor of the radio Guglielmo Marconi established the world’s first wireless communications.

Almost 5,000 letters of objection have been lodged against the £250million development, which if approved by planning officers, would see the Haven Hotel at Poole Harbour, Dorset, bulldozed to the ground.

The 141-year-old building is where Italian engineer Marconi lived with his family and set up radio communications between France and England across the English channel.

Under the proposed plans the hotel would be replaced with a six-storey block of 119 luxury apartments.

It has been announced that Bournemouth, Christchurch and Poole Council will decide on the planning application in the coming months, and has prompted more than 1,700 fresh letters of objection in under a week. 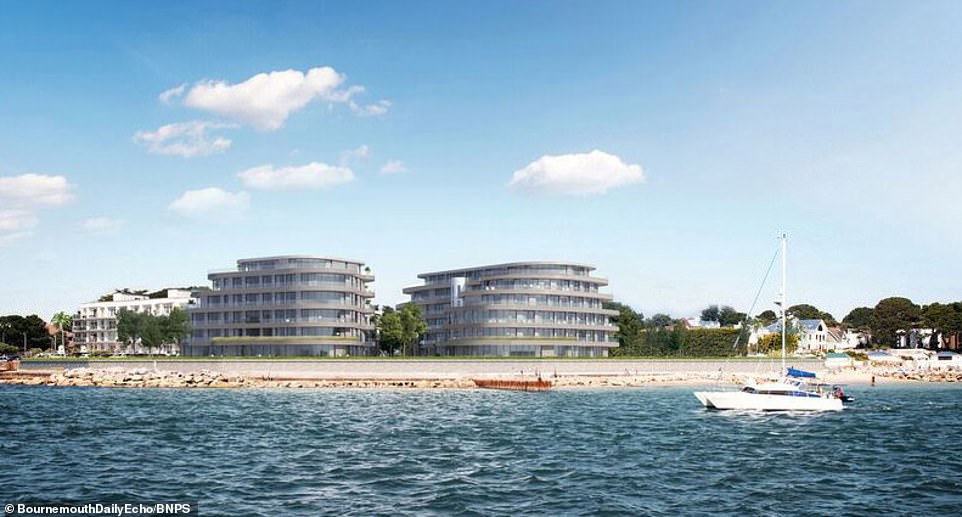 Almost 5,000 letters of objection have been lodged against the £250million development (pictured), which if approved by planning officers, would see the Haven Hotel at Poole Harbour, Dorset, bulldozed to the ground 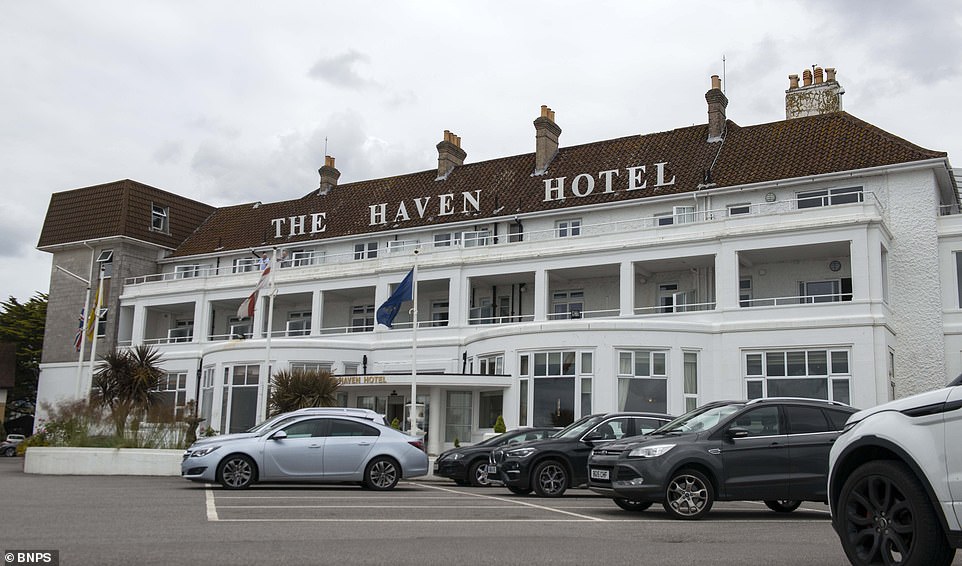 The 141-year-old building, The Haven Hotel (pictured), is where engineer Guglielmo Marconi established the world’s first wireless communications. Under the plans, it would be replaced with a six-storey block of 119 luxury apartments

The surge of opposition was prompted after a campaign group produced 10,000 leaflets which were distributed locally to highlight the issue.

Save Sandbanks, which boasts over 500 members, has also hired lawyers and set up a website and social media accounts to derail the plans.

Initial plans submitted in 2017 were met with outrage from well-heeled residents who formed a protest movement, Protect Sandbanks Group.

Protesters believe the apartment block would make Sandbanks resemble a British version of Benidorm, a Spanish resort known for its high rises and partying-culture.

The local council received more than 2,300 objections from people in the first year – with residents describing the block of flats as a ‘monstrous carbuncle’ that would overlook the multi-million pounds harbourside mansions. 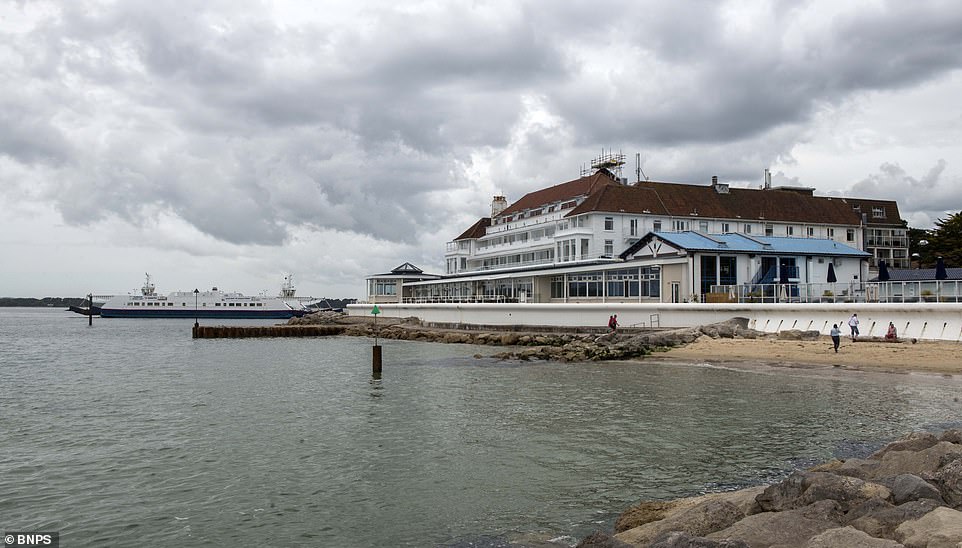 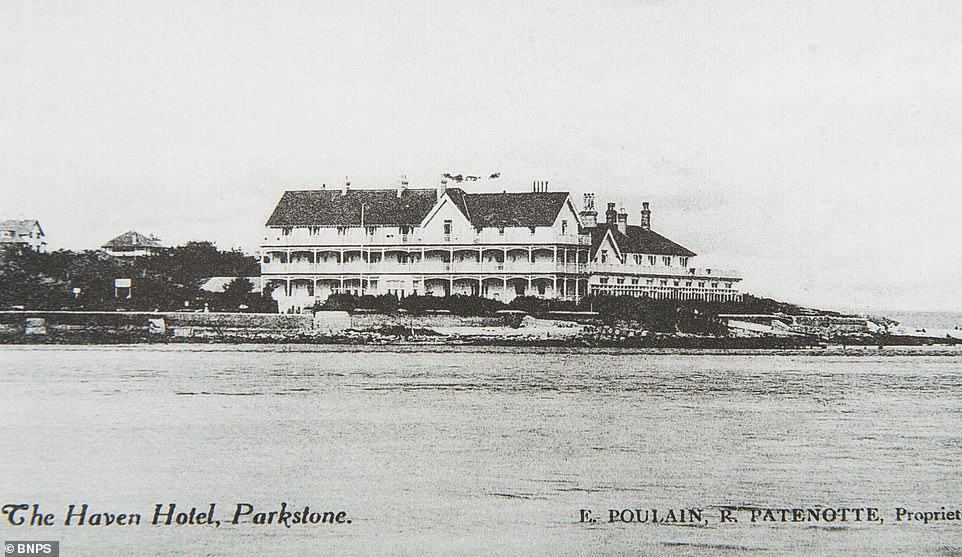 Old postcard of the historic Haven Hotel. The well-heeled residents of Sandbanks are steeling for a battle with developers over plans to replace a historic hotel with a ‘soulless’ block of flats 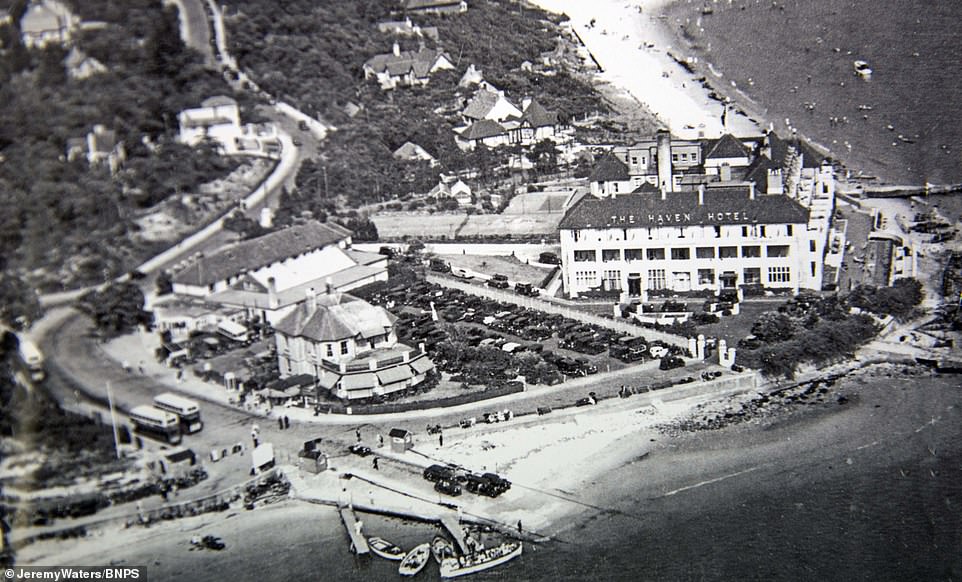 Objections have been lodged by the RSPB over the impact the new buildings will have on bird migration and the Environment Agency due to an inadequate flood risk assessment for the hotel site. Pictured: The Haven Hotel in 1938

Who was Guglielmo Marconi? The Italian radio pioneer who lived in Haven Hotel for eight years from 1898 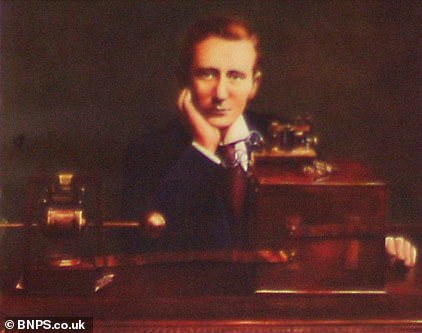 Guglielmo Marconi, 1874 to 1937, was an Italian inventor who is credited for inventing the radio.

Marconi developed the first radiotelegraphy machines in 1894 to 95, which were the first practical radio transmitters.

The inventor established a wireless transmitter at Sandbanks’ Haven Hotel in 1898, carrying out out some of his first experiments there.

Radiotelegraphy involves the transmission of ‘dots’ and ‘dashes’ which spells out text messages, like Morse code.

It continued to be the only form of radio transmission up until WWI.

In 1901, Marconi sent radio waves across the Atlantic Ocean, which led to the machines being used in ship-to-shore and ship-to-ship communication.

Marconi’s invention helped save the lives of more than 700 people on board the Titanic, which sank in April 1912, and orders for maritime wireless equipment were piling up.

In Chelmsford, Essex, Marconi opened the first ever wireless factory in 1912, from which he broadcast to the whole world.

The planning application has since been revised, although campaigners say it is ‘essentially the same’.

David Morley, chairman of Save Sandbanks, said: ‘The application was filed four years ago and things have been grinding away since then.

‘It has been through changes but essentially the proposal remains the same – to knock down the Haven Hotel and replace it with a block of flats.

‘It is part of a larger plan to demolish the Sandbanks Hotel and Harbour Heights Hotel and redevelop them as hotels.

‘But it is Haven Hotel element of the proposal which is the most controversial.

‘We have learnt that the proposal is likely to come before the planning committee in the coming months, although we don’t know this for sure.

‘As we are getting closer to a decision, we’ve gone out to the public again to draw people’s attention to the development, as most people would have forgotten about it after four years.

‘We had 10,000 leaflets delivered by the Post Office to households and since then 1,776 objections have been filed.

‘There were already 3,000 letters of objection before that so I think this shows the strength of community feeling.

‘Something really significant will be lost from Sandbanks if this goes through.’

Of the plans to knock down the Haven Hotel, he has previously said: ‘Sydney Harbour has the iconic Opera House, Poole Harbour gets a block of flats.

‘The first sight for millions of visitors would be this out of scale, soulless tower block on the beautiful face of Poole Harbour.’

Poole is home to the second largest natural harbour in the world behind Sydney and it is also an Area of Outstanding Natural Beauty.

Objections have been lodged by the RSPB over the impact the new buildings will have on bird migration and the Environment Agency due to an inadequate flood risk assessment for the hotel site.

If approved, as well as the Haven becoming flats, the Sandbanks Hotel would be redeveloped as a new five star 185-bedroom hotel and the Harbour Heights would become a 38-apartment hotel and spa.

The plans have been submitted on behalf of the owner of the three hotels, FJB Hotels. 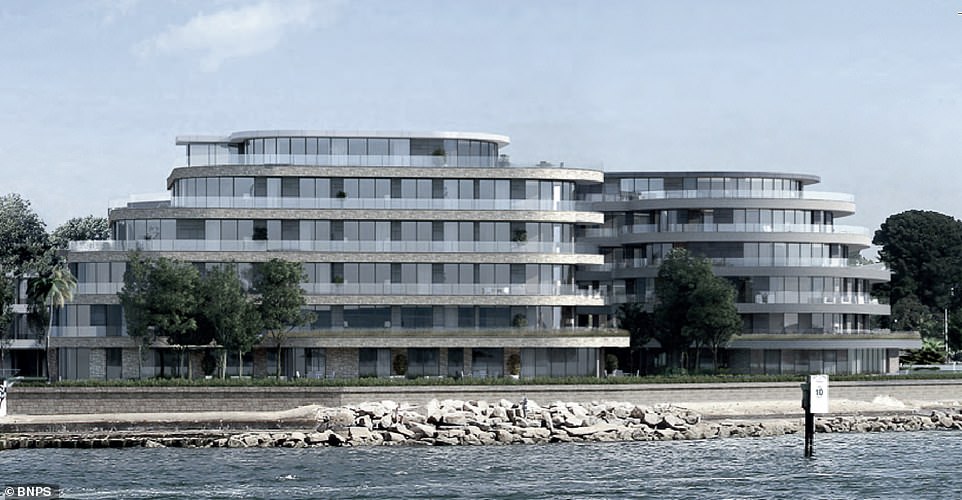 Recent CGIs of the proposed flats on the Haven Hotel site. The plans have been submitted on behalf of the owner of the three hotels, FJB Hotels 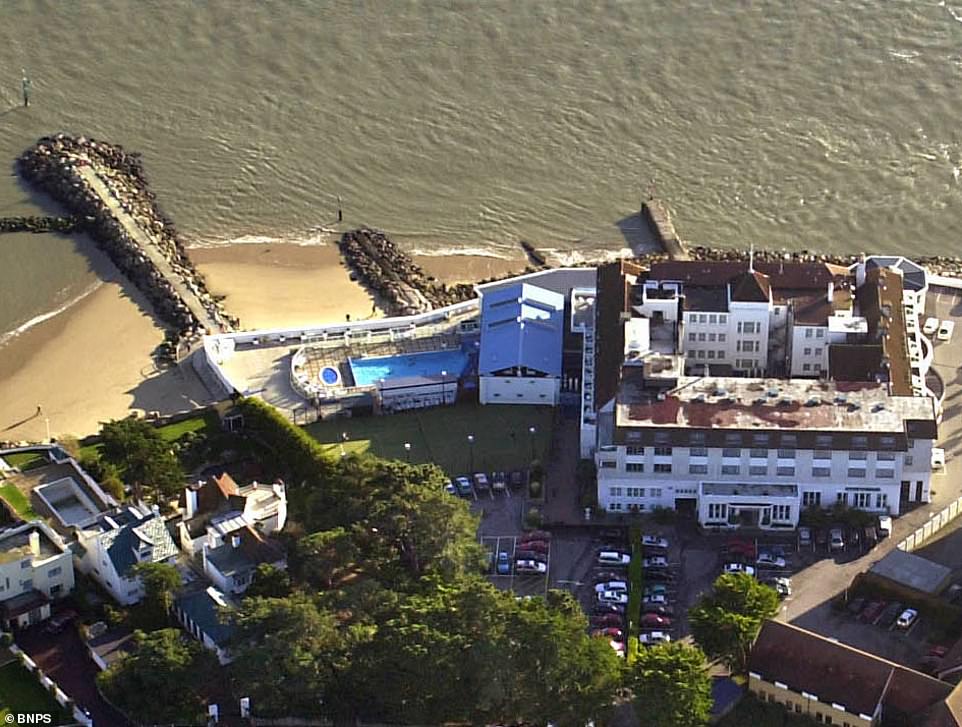 Marconi established a wireless transmitter at Sandbanks’ Haven Hotel in 1898, carrying out out some of his first experiments there 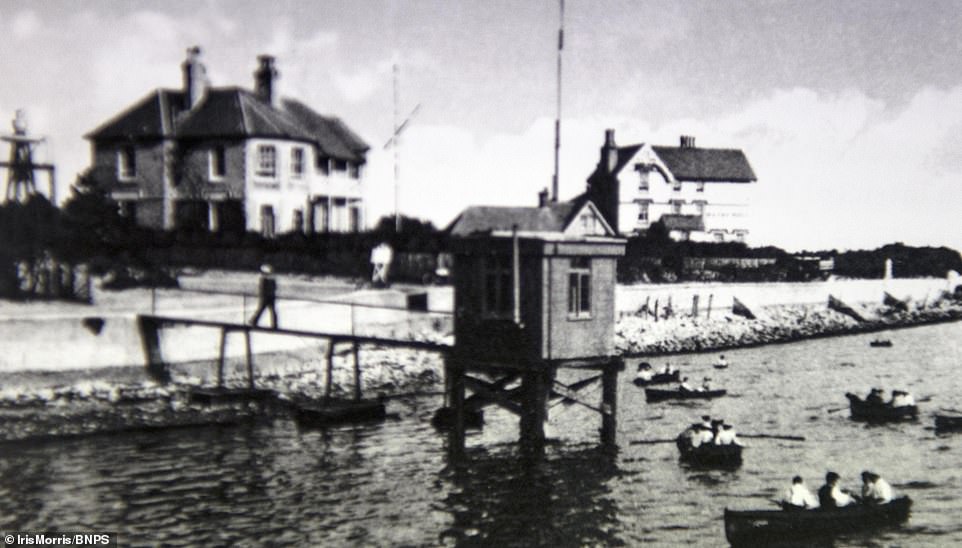 The residents of Sandbanks’ Millionaires’ Row…

The Sandbanks peninsula in Dorset is not so much a star-studded haunt of A-list actresses or pop stars, but more a permanent residence of millionaire football managers who have built their modern mansions on the seafront.

There are only 70 or so homes around the edge of the peninsula and many have been turned into luxury mansions – the average price of a property in Sandbanks is £1,134,647, far higher than in London.

Famous residents include former Queens Park Rangers boss Harry Redknapp, who recently sold his four-floor seafront home on ‘Millionaires Row’ for a cool £7million in a bid to downsize elsewhere in Dorset.

The sale is thought to have netted Redknapp £3million after the home fetched twice what he paid for it in 2015.

Graeme Souness, formerly of Stoke City, has also made his home in the exclusive millionaires’ row where in 2018 the Sky Sports pundit hived off a section of his garden and won planning permission for a vast modern house complete with four en-suite bedrooms and its own cinema and gym to be built there. 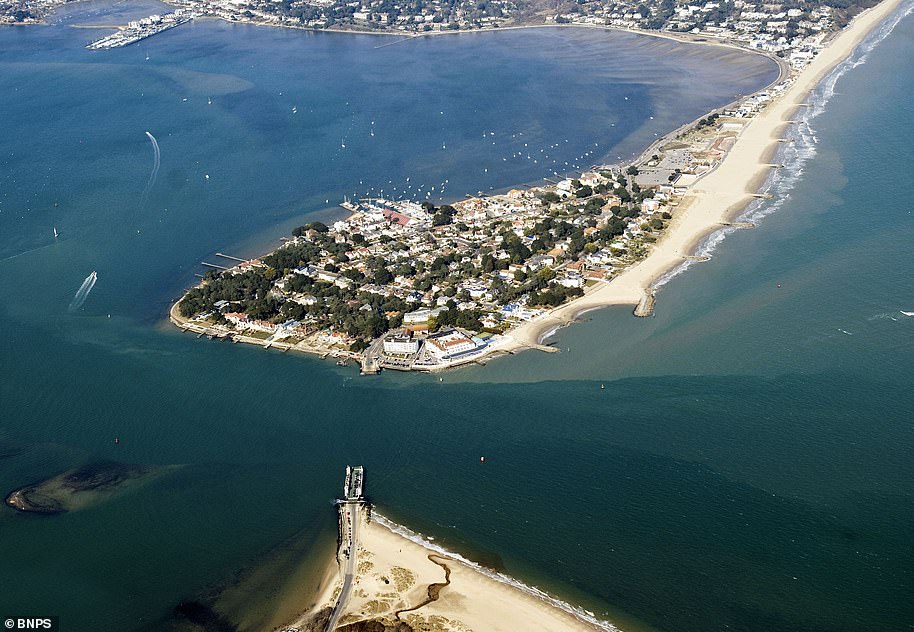 Computer magnate Sir Peter Ogden also has a home there.

Sandbanks’ popularity is attributed to its seclusion, and every home in the community is within just a few minutes’ walk of the beach, with most of them enjoying stunning views over the harbour or out to the English Channel.

Houses were first built on Sandbanks in the late 19th century, but it was not until the 1960s when a property boom saw the peninsula – measuring less than half a square mile – become more and more built-up, turning into a Millionaires’ Row filled with luxury beachfront mansions.

The property market on the peninsula has shot through the roof in the past few years, with many houses being demolished and replaced with cutting-edge new properties to meet demand.

Just 100 years ago, before it became one of the world’s most exclusive and expensive addresses, the Sandbanks peninsula in Dorset was little more than a windswept wasteland, cut off from the rest of the country and unrecognisable from the glossy coastal resort that exists today.

And while the mega-rich now compete to build bigger and better harbour-front homes, snapping up plots whenever they become available, in 1880 the tiny enclave in Poole was only home to a solitary hotel on the southern tip of the peninsula, where guests could get away from the rest of civilisation.

‘Start spreading the news’: Meet the town in war-hit Ukraine hoping to change its name to New York

A former Facebook exec tweeted that an employee when complained to a 'large tech' CEO about the excellent of the rest room paper throughout an all-hands assembly.  His...