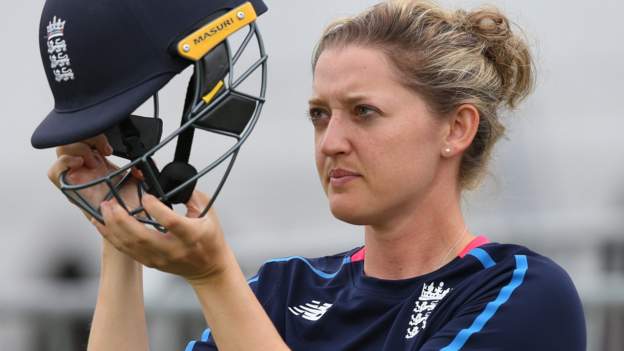 Among the myriad of restrictions brought to everyday life, lockdown is preventing Sarah Taylor from returning to the nets.

Perhaps the finest female wicketkeeper to have played the game, Taylor retired from international cricket because of a battle with anxiety in September 2019, a month after her last game for Surrey Stars in the Kia Super League.

Now a coach at St Bede’s School in Eastbourne and still only 31, Taylor is ready to test the waters.

“I took my cricket bag to school ready to have a hit this term, to see where my head was at, to see if I wanted to do it again, or if I was terrible and I’d lost it,” she says.

“If I had a good net, maybe I’d think ‘I’ve still got it, I still enjoy this, let’s give it a go’. I haven’t had the opportunity, so I genuinely don’t know.”

To be clear, this is not Taylor announcing a comeback, but she is also not ruling one out, either.

She admits to being tempted by the inaugural season of The Hundred, but can’t imagine adding to her 226 England caps.

“I would love to be a part of a tournament like The Hundred, given it would be its first year if it were to happen,” she says.

“If England really, really needed me – which I can’t imagine they would – I’d probably keep for them.

“I just want to have a hit and if I realise I’ve missed it, let’s go. If I haven’t, I’m still happy. I don’t feel the need to play again.”

At the moment, Taylor is a former cricketer. She says part of her job at St Bede’s is “standing on a football field, shouting at year five children to get them to run faster”, but with the school closed during lockdown, she had been placed on furlough.

She is speaking to launch Sussex’s Mental Health and Wellbeing Hub, the first-class county having developed an online resource to provide support to the local community.

By coincidence, the conversation is taking place almost eight years to the day since Taylor made front-page news across the world for revealing she had been in talks to play for the county’s men’s second XI.

“That blew up,” says Taylor. “It was an off-the-cuff comment. I said if they needed me I’d be happy to help out. Then boom.

Is there help for homeowners in arrears? And other Budget questions

“There’s half of me that wishes I’d given it a go, that wonders if I could have handled that situation.”

Although Taylor ultimately never played for the Sussex seconds, she did take steps into the men’s game.

In April 2013 she played in Walmley’s first team, becoming the first woman to feature in senior Birmingham club cricket, and in October 2015 made history as the first female to appear in an Australian A Grade match, turning out for Adelaide side Northern Districts.

“I like doing things that I probably shouldn’t be doing,” Taylor explains. “There was a lot of acceptance around it. People were saying ‘if she’s good enough, why not?’

“No woman had played grade cricket in Adelaide. It was thrown my way and the first reaction was ‘no’, then I thought ‘why not, let’s smash the ceiling’.”

However, it wasn’t long before anxiety was to have its first major impact on Taylor’s career. Nine months after her momentous achievement in Australia, she took time away from the game, revealing that she had suffered from panic attacks.

Looking back now, she concedes that the extra attention she was receiving contributed to the battle against the anxiety.

“There was expectation there,” Taylor says. “I didn’t want to be different from any of the girls, but I did feel different through my own insecurities. I ended up pushing myself away from the girls.

“I was even quite anxious before the game in Australia. I said that I didn’t want attention taken away from the fixture, then I played and spent two hours on the phone doing interviews. There were camera crews there, and all I wanted to do was play cricket with some friends.

“Other times I’d be playing England games and nearing a hundred, or towards the end of a match-winning innings, and rather than thinking about batting I’d be worried about doing the interview at the end of the game.

“I didn’t want the recognition. I just wanted to do my job and then go home.”

Taylor would return to be part of the England team that won the World Cup in 2017, but the remainder of her career was punctuated by spells away. She rarely played overseas again.

Even now, 18 months after retirement, Taylor’s 232 dismissals remains a record in women’s international cricket and only the legendary Charlotte Edwards can better her 6,533 runs for England.

The closest she has come to the elite version of the men’s game is coaching at Sussex, where she works with wicketkeepers in the academy and, occasionally, the senior team. She has rubbed shoulders with former Sussex head coach Jason Gillespie and incoming bosses Ian Salisbury and James Kirtley.

Taylor still believes another woman could dedicate even more time than her and break into the men’s game, but would prefer it if remuneration, coaching and opportunity for females was raised to such a level that switching wasn’t seen as progression for someone at the top of the women’s game.

“Even just in training,” she says. “They might say ‘Sarah’s here and she wants a hit’, and a man would be the one to do the bowling.

“A woman wouldn’t be seen as a woman, just another person, a fellow cricketer. That would be lovely.”

For now, though, Taylor will wait for the opportunity to return to the nets as she gets to the point where she is “OK with cricket”.

“I didn’t resent the game, but there were a lot of negatives given what I was going through,” she says.

“But, really, cricket did nothing wrong to me and I’m good, probably the best I’ve ever been.