SARAH VINE: A generation so warped they are PROUD to sell their own bodies

We need to talk about Lotties. The former Apprentice star, Lottie Lion, has been making ends meet through a so-called ‘sugar daddy’ website called Seeking Arrangement.

Having lost her job due to the pandemic, and missing her former lifestyle, she signed up hoping to meet someone who ‘would buy me a bag or a holiday’. 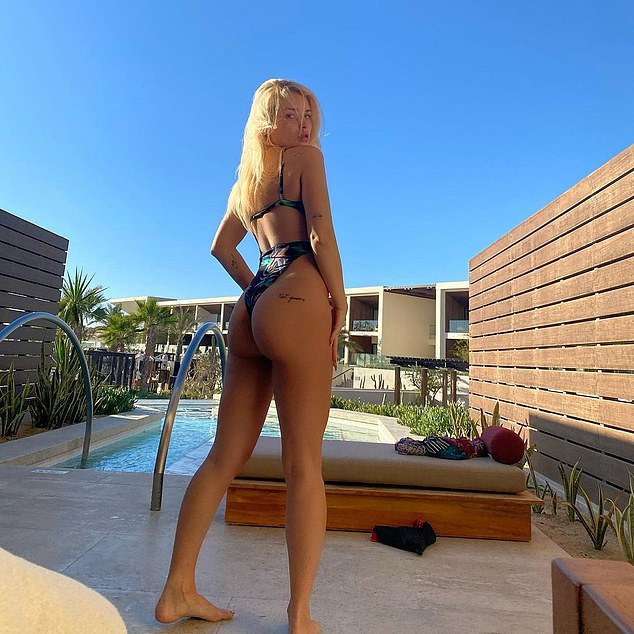 The fact that either of these women — who, let’s face it, are not exactly in the last-chance saloon of life — should be flogging their body parts in such a way may seem surprising. But today’s young women see nothing unusual about exploiting their bodies.

Indeed, many claim it’s a form of female empowerment. They are ‘owning’ their sexuality, they argue. The men who pay are not exploiting them — they’re the saps. And anyone who disagrees is just slut-shaming.

It is certainly true that if one is in the unenviable position of having to take up the world’s oldest profession, entertaining men from the safety of your own webcam is preferable to being exploited on the streets or in a studio by some ruthless pimp.

But the women on these sites don’t consider themselves prostitutes. Indeed, they would be horrified at the thought. They think of themselves as entrepreneurs — feminists, even. 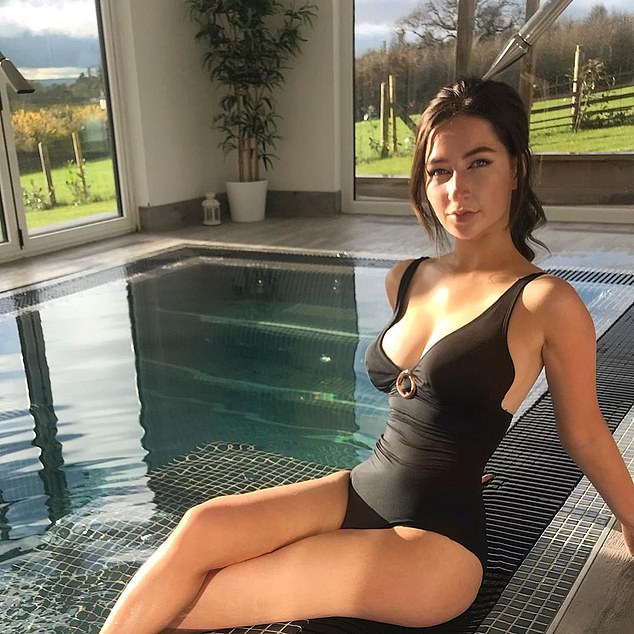 For women of my generation, this is a hard concept to get our heads around. We were taught that using sex to get ahead was demeaning and retrograde.

Liberation meant being more than just the object of a man’s desire, and you could make your way in the world regardless of whether you looked good in a bikini.

That is because, unlike women such as Moss and Lion — indeed like all of the young women we see posing online in various stages of undress — we didn’t grow up in a post-porn world.

Pornography has always existed, of course; but never before has it escaped censorship by adults, seeping virtually unencumbered into the consciousness of children and young adults. 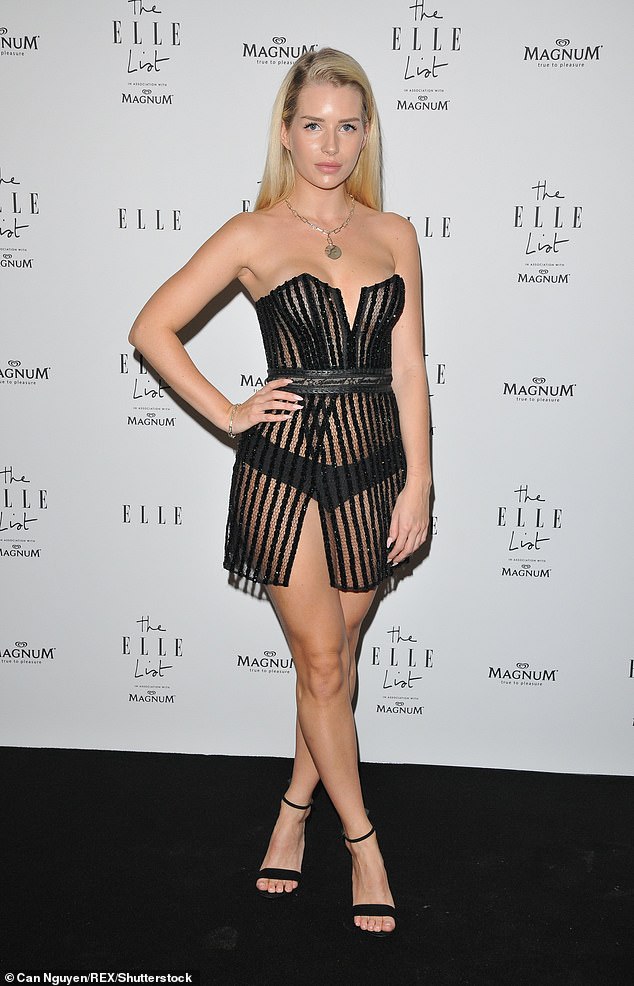 SARAH VINE: For £35 you can access her derriere, while £1,000 will reportedly unlock access to the Full Mossy

This translates into every aspect of youth culture, from oiled-up ‘influencers’ showing off their cleavages poolside to the rise in demand for plastic surgery such as breast enhancement and butt-lifts, and porn-centric pop stars such as Cardi B, whose videos legitimise obscenity in the name of ’empowerment’.

What used to be the shocking exception has become the acceptable norm, a self-perpetuating cycle of debasement reinforced at every turn by a prevailing culture that rewards with fame and fortune those who turn it to their advantage. Or to put it another way, Kim Kardashian didn’t end up on the cover of Vogue for her intellect and philanthropical work: she got there because she made a sex tape and ‘broke the internet’ by balancing a champagne glass on her bum.

Is it any wonder, then, that so many should want to do the same? That, in the minds of young women growing up in such an atmosphere, operating a pay-per-view system on OnlyFans seems like a viable alternative to a proper job?

I am even told that some young girls are using these websites to raise money for their university tuition fees. I can hardly think of a more depressing way to spend your gap year.

This, I’m afraid, is the price we pay for ignoring repeated calls for regulation of the internet.

This is what happens when you allow the worst of human nature to influence everyday standards.

The genie is well and truly out of the bottle. Sadly, I can’t see how we can ever put it back.

No sooner has Nobel Prize-winning novelist Sir Kazuo Ishiguro warned that cancel culture is stifling creativity in literature than the publishers of Dr Seuss cancel six of the author’s titles because of ‘racist’, ‘insensitive’ material.

It’s like tearing down the Sistine Chapel because of a lack of diversity in the heavenly host. Yes, it’s full of white males. But that’s Renaissance Italy for you.

Dr Seuss was also of his time, and many attitudes of his day were unpleasant. Racism and prejudice were endemic, and his books reflect that.

Airbrushing the ugliness doesn’t mean it never existed. Indeed, you could argue it’s important to have a record as a reminder of the suffering such attitudes caused — and why we must not tolerate them today.

The East Wing of majestic Hurst Castle — constructed by Henry VIII to protect the Solent against the French — slid into the sea last week.

Experts had long warned of a problem with the foundations, but despite repeated calls for action English Heritage — which owns the building — did not act in time to save it. Now it’s too late.

Perhaps if it had spent less time rewriting our heritage (last year it announced all 950 of London’s famous blue plaques would be reviewed for potential links to slavery) and more time looking after it, this important building would still be intact. 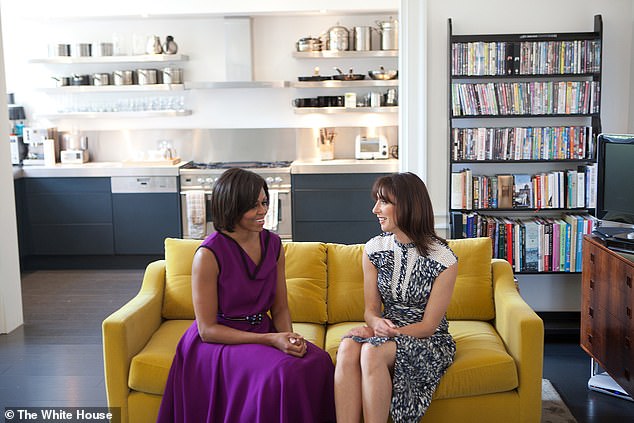 Apparently the cost of redecorating the No. 11 flat at Downing Street is causing a headache for the Prime Minister. Pictured: Samantha Cameron with Michelle Obama in Number 11

Apparently the cost of redecorating the No. 11 flat at Downing Street is causing a headache for the Prime Minister.

Nothing new there: when my old friend Samantha Cameron moved into the same flat in 2010, she was criticised for making it too modern. In reality, she rescued it from a nightmare of stained beige carpets, hideous built-in furniture and a downstairs loo that reminded me of the one in Trainspotting.

The No. 10 flat, meanwhile, still had one room that stank of fags (with matching tobacco-stained ceiling) from Denis Thatcher’s days.

I think the budget for maintenance at the time was around £20,000 a year, not nearly enough to cover the upkeep of such a historic, Grade I-listed building. Part of the problem was the fact Samantha was obliged to use ‘by appointment’ government contractors, who charged an entirely unjustifiable mark-up.

In the end she paid for the works herself, which Theresa and Philip May benefited from — and explains, of course, why they didn’t have to spend a penny on the place.

Should runners wear masks while exercising in public? Trish Greenhalgh, professor of primary care health science at the University of Oxford, thinks the answer is yes — and has been accused of whipping up hysteria.

Who knows whether masks stop the transmission of Covid-19.

But one thing is undeniable: our parks and pathways are packed with runners, breathing (understandably) very heavily and often passing by in such close proximity you can feel their breath on your face. Surely it’s not an unreasonable request?

I think we’re going to have to find a better way of naming these virus mutations.

Every time someone mentions the Brazilian one, all that comes to mind is the fact that it’s been far too long since I went to the beauty salon.

Technically, Mother’s Day is March 14. But we all know when it really is: Monday the 8th, the day the kids finally go back to school!

I never thought I’d be so excited at the prospect of the school run.