SARAH VINE: Did Boris want to be World King to protect his fragile and sick mother?


Earlier this year, I read – and very much enjoyed – Rachel Johnson’s mischievous political memoir, Rake’s Progress. Ostensibly it’s about her ill-fated efforts to get elected as a pro-Remain MEP for the doomed Change UK party.

But there are also some fascinating insights into her family life, and in particular her childhood growing up with three brothers, one of whom is, of course, our Prime Minister.

She writes about their chaotic childhood, their charismatic but absent father Stanley, their beautiful but troubled mother Charlotte. She paints a picture of benign neglect, a peripatetic existence often teetering on the brink of disaster.

‘Today the Johnson children would have been taken into care,’ she says, describing Charlotte as a ‘tethered brood mare’ who ‘it seemed to me spent most of her time when she wasn’t looking after us smoking or cleaning’. 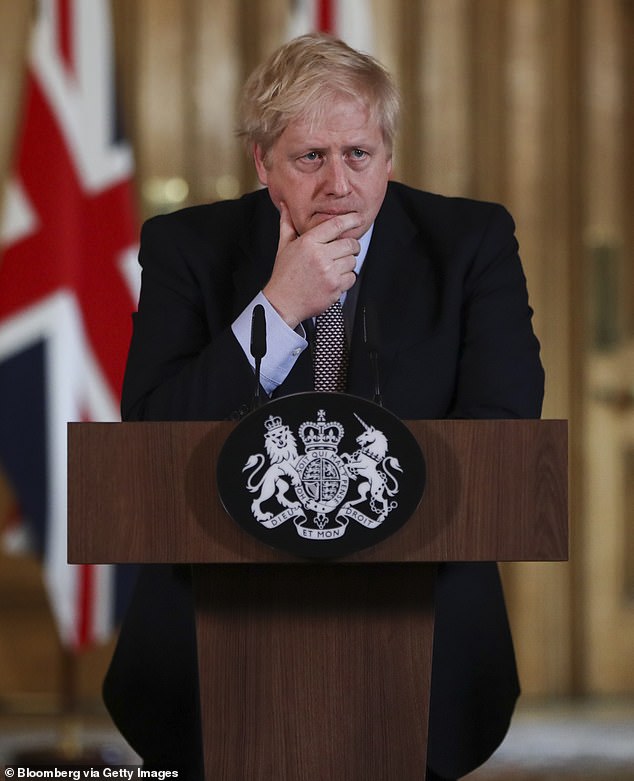 One of her brothers eats a strange mushroom he finds behind the cooker and ends up in hospital; Rachel herself almost chokes to death on a piece of eggshell. As for her mother: ‘She was admitted to the Maudsley Hospital with a case of OCD so severe that doctors ended up trying, and failing, to cure her with electric shock treatment, which was at least less violent than the other therapy most fashionable at the time, a lobotomy.’

At the time, I thought all this was just a case of Rachel being a bit over-the-top in her usual breezy, self-deprecating way.

But today’s frankly earth-shattering revelation that their father, Stanley, as well as being an absentee dad and a serial adulterer, also once hit his wife Charlotte so hard that he broke her nose, has shed an entirely different light on her recollections.

Suddenly, what seemed like nothing worse than a slightly eccentric upbringing is revealed as very far removed from the glamorous, bohemian image of an unconventional but otherwise happy family the Johnsons have always cultivated.

And it shows, in a way that Rachel only ever hinted at, the difficult family circumstances that characterised Boris’s early years. Because Rachel is right: as Tom Bower’s book details, today those children would have been taken into care.

This alleged incident, which will no doubt only serve to deepen the already existing differences within the Johnson clan, is very concerning indeed. And for once it’s not just malicious gossip: the story comes directly from Stanley’s former wife, Charlotte: ‘He broke my nose. He made me feel like I deserved it.’ An image emerges that is very far from the bumbling but broadly benign Stanley Johnson we know and love.

What fresh hell is this?

In their infinite wisdom, MPs have decided to legalise e-scooters.

That’s right, those overgrown toddlers hurtling along our streets at 40mph on souped-up skateboards: Government approved.

The other day I saw one on a dual-carriageway.

I’m no fan of the nanny state but do we really want to be encouraging such suicidal levels of stupidity?

Is it true? The broken nose incident has been confirmed by the family – but Stanley insists it was the only time he was violent and that it occurred in the midst of an argument, and that it was accidental. Boris and his siblings, it seems, were well aware of what was going on. On the occasion that he broke her nose, they were told their mother had been hit by a car door. But they were not stupid – far from it.

Charlotte herself says they knew the truth: ‘That was terrible for the children.’

It must have taken incredible bravery for Boris’s mother, who now suffers from Parkinson’s, to decide to tell her story to biographer Tom Bower.

It also, to my mind, shows how hard it must have been for her and the children that, 45 years on, she should want to dig up memories that many might have felt would have been better left buried in the mists of time. Of course, an isolated act of domestic violence doesn’t just affect those directly on the receiving end. It can have a long-lasting impact on those around it, children in particular.

The knowledge now that Boris might have been a witness to such a traumatic event, and that his early years could have been characterised by such heart-breaking scenes will, inevitably, make even the Prime Minister’s most vehement critics see him in a very different – and, I suspect, far more sympathetic – light.

For the young Boris, seeing his beloved mother being treated this way by a father he also adored and idolised, would only have led to deep feelings of confusion and hurt, compounded by the fact that when his parents divorced, the children were effectively left to fend for themselves.

‘We were abandoned as children after the divorce,’ says Rachel. ‘We had to bring ourselves up. We had no home.’

How much did all this shape the character of the man who now leads the country at this most testing of times?

We are all, inevitably, products of our upbringing. But this picture of a troubled, unstable childhood is not only a stark reminder that such things can happen in any family, regardless of wealth and class; it also perhaps answers some of the enduring questions about Boris himself, and the true nature of this most mercurial of politicians.

There can be no doubt that the Prime Minister has faced an impossible challenge over these past few months.

There are many, both throughout the country at large and within his own party, who feel that the Boris they elected – the grandiloquent libertarian, the gung-ho go-getter, the man whose infectious enthusiasm and indefatigable appetites have always inspired an army of followers – has been replaced by an entirely different creature altogether. 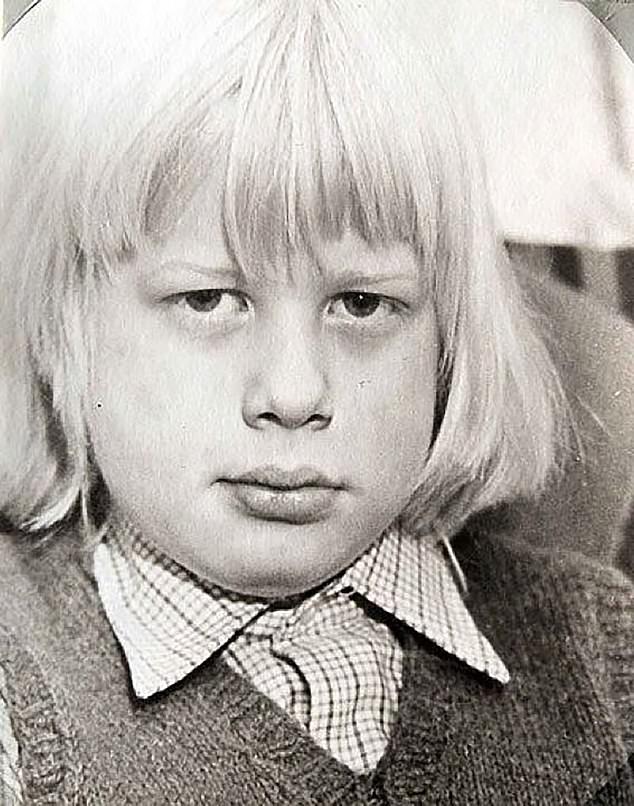 Interestingly, his mother also thinks Boris’s childhood informed another undeniable aspect of his character: his attitude towards women and his serial infidelities. ‘Boris’s adultery,’ says his mother, ‘is just like his father’s.’ Pictured, Boris Johnson as a young boy

Boris 2020 is very different from Boris 2019. And while much of it is understandable – after all, what man wouldn’t be changed in some way by a brush with the Grim Reaper, the arrival of a new baby and having to deal with a global pandemic – there are many who see him as too in thrall to his scientific advisers, overtly cautious, insufficiently maverick.

A more sombre, careful individual, a man who suddenly doesn’t seem quite so sure of himself. A man who sometimes stumbles over his words, who seems to be looking to others for validation. In short, not the ‘real’ Boris, the Boris of old.

But the question in my mind, having got a flavour of what he endured growing up, is the extent to which that Boris was ever ‘real’.

If women ruled the world…

We’d long ago have had clarity as to whether Christmas is cancelled or not.

I did have one thought that might help, though: the current school end-of-term date is Friday, December 18.

If that was to be moved to Friday, December 11, then children could have a two-week isolation from their massive year bubbles – and safely spend time with their grandparents on Christmas Day.

How much of Boris’s Boris-ness, as it were, was every truly him – and how much an elaborate defence mechanism designed to conceal a much more subtle, nuanced and complex personality?

Think, for example, of the now infamous incident when, as a young boy, he declared that he wanted to be ‘World King’.

This is often given as proof of his seemingly unquenchable thirst for power.

But if you are a little boy whose life is chaos, who longs for control, who wants to make things right, who is desperate to try to help your fragile and sick mother, wouldn’t you want to make it all right?

As his mother Charlotte herself says: ‘I have often thought that his being “World King” was a wish to make himself unhurtable, invincible, somehow safe from the pains of your mother disappearing for eight months.’

It’s heart-breaking, really, when you think about it.

Interestingly, his mother also thinks Boris’s childhood informed another undeniable aspect of his character: his attitude towards women and his serial infidelities. ‘Boris’s adultery,’ says his mother, ‘is just like his father’s.’

Whether that is true or not, I cannot say. Whatever their faults, both are undeniably hugely charismatic alpha males, and, as such, highly appealing to women.

But it is certainly true that fathers inevitably shape their children’s behaviour, and in particular that of sons.

It must have been hard for Boris growing up with a father who not only made his mother very unhappy, but who also made it clear by his actions that his family were not always his first priority.

Perhaps that left him, in some way, with an insatiable need to be loved.

Either way, there is little doubt that it will be incredibly painful for all the family, and Boris in particular, to relive these unhappy memories from so long ago, however much the revelation might represent a kind of closure for his mother.

It is the curse of all public figures that sooner or later someone will find that one bit of dirty laundry you had completely forgotten about. Boris, it has to be said, seems to have rather more than most.

On this occasion he can at least take solace from the fact that, for once, it is not his fault.