Smoke was billowing from the slopes of Mount Kilimanjaro today as firefighters battle for a third day to bring the blaze on Africa’s highest mountain to a standstill.

A satellite image showed smoke swirling near the summit of the 19,341ft mountain while other pictures showed it ablaze at twilight and vegetation on its slopes being reduced to cinders.

Preliminary findings have blamed the fire on porters who were heating up food for climbers on one of the mountain trails.

As many as 400 people from Tanzania’s national parks service were trying to contain the fire on Tuesday with local residents and students also joining the effort. 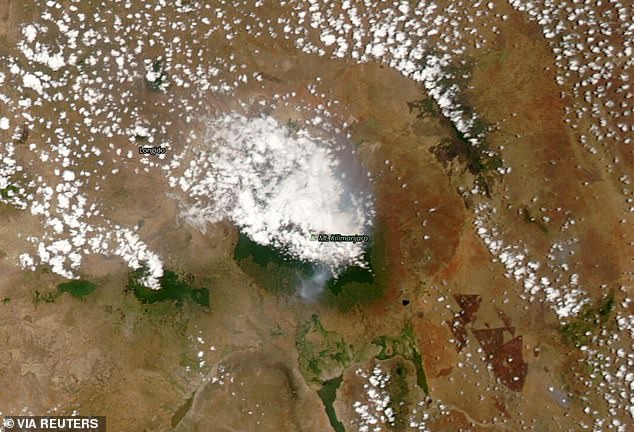 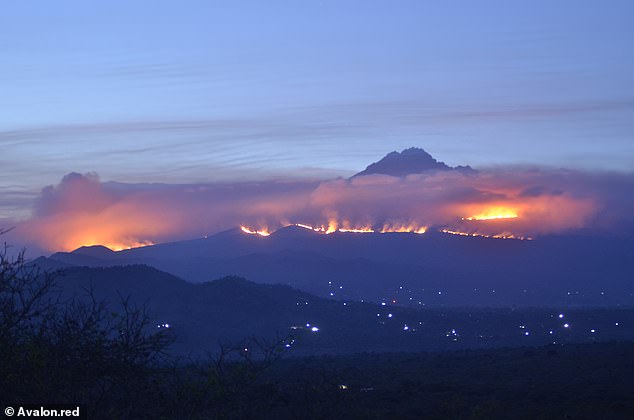 The fires burning on the slopes of Kilimanjaro at twilight, with flames visible a long distance from the mountain as the blaze enters a third day today 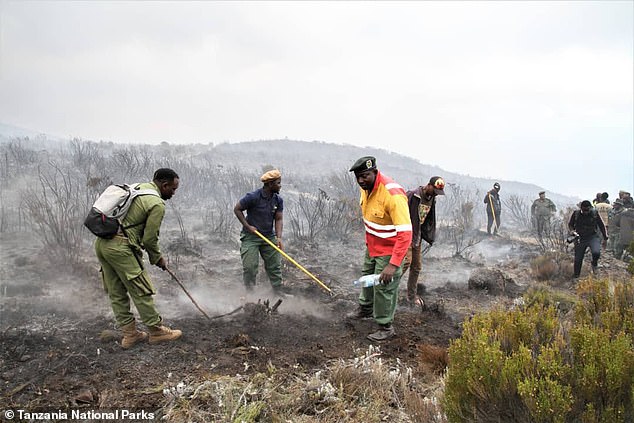 Hamisi Kigwangalla, Tanzania’s minister for natural resources and tourism, said that his ‘heart is broken’ following the ‘eruption’ of Kilimanjaro.

‘Our mountain is a legacy and is a major source of income for our country,’ the minister said.

‘The fire will have destroyed biodiversity in the area of between 2,000 and 3,500 metres, which is an Alpine zone with shrubs and very few species of animals.’

The fire was first detected in the Whona area, a rest centre for climbers using two routes to the summit called Mandara and Horombo.

Tanzanian park service official Pascal Shelutete told reporters that the dry grass had apparently caught fire while climbers were being served by porters.

‘Though there could be more to this fire, preliminary evidence points [to] Whona where visitors were warming their food’, he said, according to The Citizen.

‘As you know this is a dry season and fire spreads very fast.’

Officials said the winds which initially fanned the flames had weakened on Tuesday. 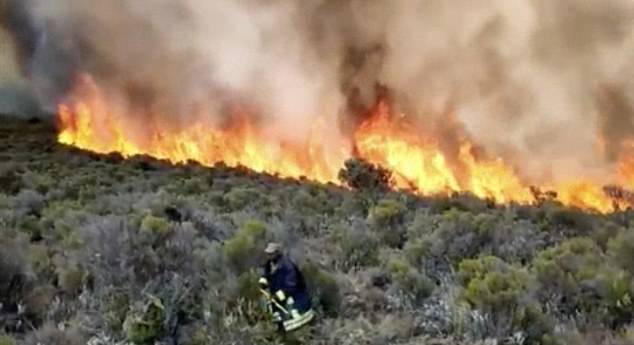 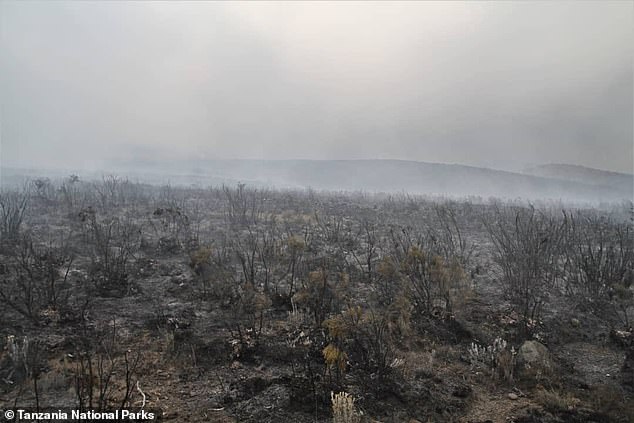 Vegetation was reduced to cinders after the fire swept over large swathes of the mountainside, with smoke obscuring the view 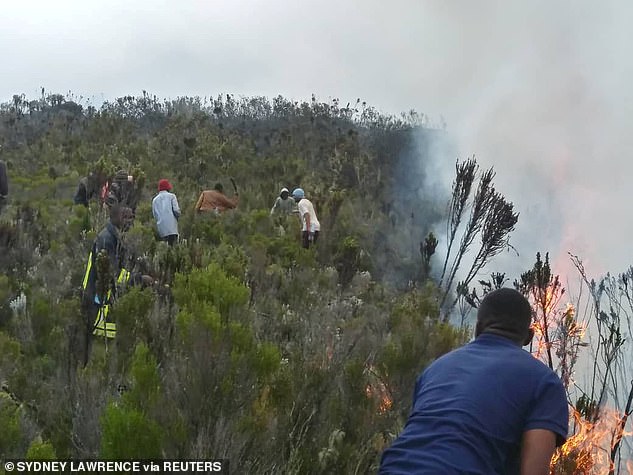 Some of the hundreds of people trying to bring the blaze under control including Tanzanian park service workers, local residents and students

Shelutete said that firefighters and others were getting the blaze under control, saying it was ‘almost contained’.

Hundreds of firefighters, residents and students in the area joined the effort to battle the blaze on Kilimanjaro, which usually attracts around 50,000 climbers a year.

‘The weather is calm and there is no heavy wind that can spread the fire to other areas,’ said Alex Kisingo, deputy head at the nearby College of African Wildlife Management, which has sent students and staff to fight the fire.

‘The fire could have been contained earlier but the mountainous fire is very tricky,’ he said.

Kisingo added that no one had been injured and private property had not been affected.

He said the blaze could be contained by Tuesday evening, if the calm weather continued. 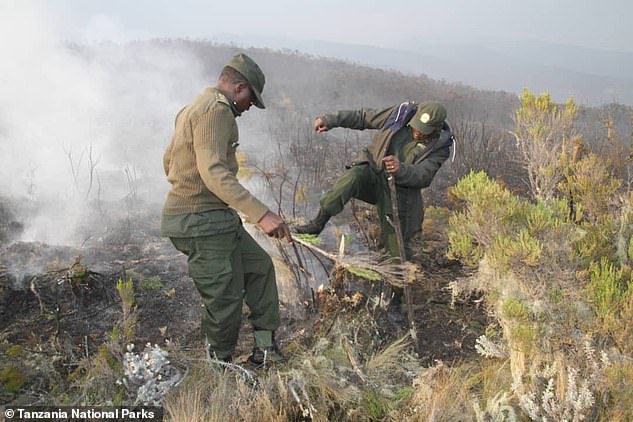 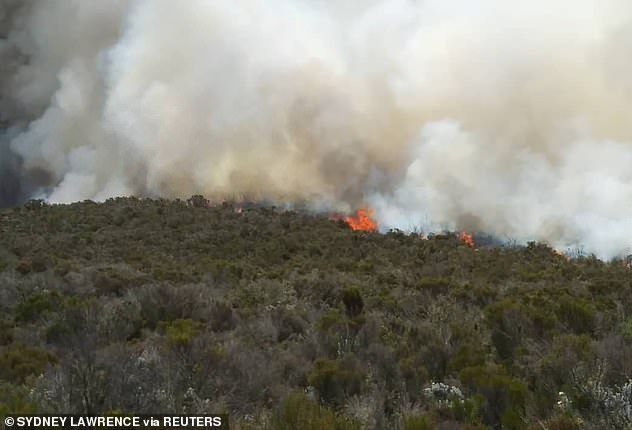 Fire races across grassland on Mount Kilimanjaro on Monday, a day after the fire broke out at a rest centre for climbers on Africa’s highest summit 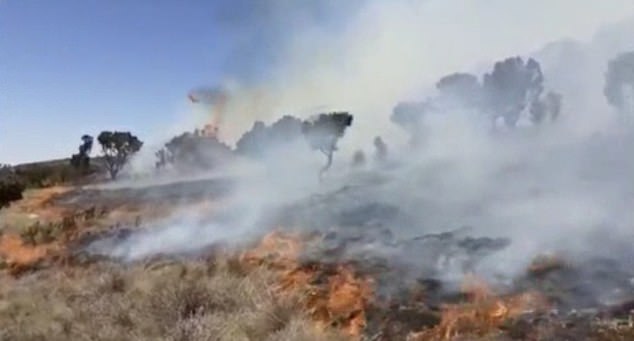 Top Chef Carla Hall is prepared for anything