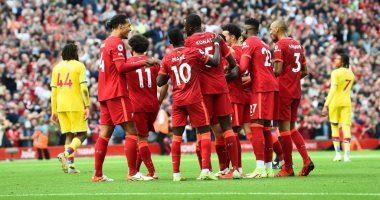 Yesterday, Saturday, many matches were held in various stadiums in the world, most notably star Mohamed Salah’s goal in Liverpool’s 3-0 victory over Crystal Palace in the English Premier League, in addition to Bayern Munich’s great victory over Bochum 7-0 in the German League, and Inter’s victory Milan beat Bologna 6-1 in the Italian League.

Brentford defeated its host Wolverhampton with two clean goals, in the match that brought them together on Saturday afternoon, in the fifth round of the English Premier League competition at the Molyneux Stadium.

Brentford scored two goals against Wolverhampton, Evan Toni and Brian Mbiomo in the 28th and 34th minutes of the match.

With this result, Brentford’s balance rises to 8 points in ninth place in the English Premier League standings for the 2021-2022 season, while Wolverhampton’s balance freezes at point 3 in 14th place.

Egyptian star Mohamed Salah led his Liverpool team to an important victory over its guest Crystal Palace, 3-0, in the confrontation that took place between them on Saturday evening, at “Anfield” in the fifth round of the English Premier League competition “Premier League” in the current season 2021-2022.

Arsenal snatched a deserved victory from the fangs of its host Burnley team, with a free goal, in the confrontation that brought them together at “Turf Moor”, as part of the fifth round of the English Premier League competitions for the current season 2021-2022..

Martin Odegaard scored the first goal for the Gunners in the 30th minute of the first half and the match, from a free kick from outside the penalty area, which he played brilliantly through a direct path.

With this result, Arsenal jumped 4 positions at once, as it occupies the twelfth place in the English Premier League table with 6 points, while Burnley is in the nineteenth and penultimate position with a single point..

Aston Villa scored a precious victory over its guest, Everton, by three goals, in the match that brought the two teams together this evening, Saturday, at Villa Park, as part of the fifth round of the English Premier League competitions for the current season 2021-2022..

Aston Villa’s goals came in the second half, as defender Matti Cash scored the first goal in the 66th minute, and Everton defender Lucas Digne added an own goal in the 69th minute..

With this result, Aston Villa’s balance rises to 7 points, and it occupies tenth place in the English Premier League table, while Everton’s balance stopped at 10 points in fifth place..

Rayo Vallecano deepened the injury of its guest, Getafe, by sweeping it with a white hat, in a meeting held on Saturday, at the Vallecas stadium, in the fifth round of the Spanish First Division..

The 35-year-old veteran Colombian went to the field in the 70th minute of the match, in his first participation with Rayo Vallecano, to return to playing in the Spanish League for the first time after he left the ranks of Atletico Madrid at the end of the 2012-2013 season..

With the victory, Rayo Vallecano raised his score to seven points and moved up to seventh place temporarily, pending the results of the remaining matches of the round..

Fiorentina defeated its host Genoa 2-1 in the fourth round of the Italian League competitions for the current season 2021-2022, which was hosted by the Luigi Ferraris stadium..

Ricardo Sabonara advanced for Fiorentina in the 61st minute, and Giacomo Bonaventura added his team’s second goal and match in the 89th minute, while Domenico Crisno scored Genoa’s only goal from a penalty kick in the last minute.

This is Fiorentina’s third victory in the Italian league this season, after falling in the first round match against Roma..

With his victory, Fiorentina raised its score to the 9th point, occupying fourth place in the Italian league standings, with a goal difference only from Rome, Milan and Napoli, who have one less game..

Inter Milan swept its guest, Bologna, 6-1, in the meeting that brought the two teams together, on Saturday evening, at the “Giuseppe Meazza” stadium, as part of the fourth round of the Italian League competitions for the current season 2021-2022..

Slovakian defender Skriniar added the second Nerazzurri goal in the 30th minute from a header after following Dimarco’s cross from a corner kick..

Nicolo Barilla concluded the Inter Milan hat-trick in the 34th minute, after following a rebound from the Bologna defense to easily put it in the net..

In the second half, the Nerazzurri continued their sweeping attack, and scored another hat-trick through Uruguayan Matias Vicino and Bosnian striker Dzeko, with two goals, in the 54, 63 and 68 minutes. Artur Thiat scored the only goal for Bologna in the 86th minute of the match.

Inter Milan rose to the top of the Italian league standings with 10 points, while Bologna’s balance stopped at 7 points in seventh place..

Atlanta, on Saturday evening, achieved a difficult victory over its host Salernitana, with a goal free of charge, in the match that was held at (Archi) Stadium in the fourth round of the Italian League confrontations for the current season 2021-2022.

Atlanta’s goal and the only match, Colombian striker Duvan Zapata scored in the 75th minute, taking his tally to two goals this season.

With his victory, Atalanta raised its score to the seventh point, occupying seventh place in the Italian League standings, while Salernitana is at the bottom of the standings after its fourth loss in a row without a balance of points.

Bayern Munich swept its Bochum counterpart, by seven goals, in the match that brought them together, at the Allianz Arena, in the fifth round of the German Bundesliga competitions for the current season 2021-2022.

With this result, Bayern Munich took the lead in the German Football League with 13 points collected from 5 matches, awaiting the stumble of its opponent, Wolfsburg, the runner-up, with 12 points.

On Saturday evening, the Cologne team drew with its guest, Leipzig, in the fifth round of the German League “Bundesliga” for the current season 2021-2022, which was hosted by (RheinEnergy Stadion)..

Frenchman Anthony Modeste advanced for Cologne in the 53rd minute, and Malian international Amadou Haidara tied for Leipzig in the 71st minute.

Mentionsed The Leipzig team failed to achieve a victory for the third match in a row in the “Bundesliga”, as it drew with Cologne and lost from Wolfsburg and Bayern Munich, in addition to losing from Manchester City by six goals for three in the first matches of the Champions League group stage.

Al-Hilal team topped the Saudi Professional League standings temporarily, after the exciting and difficult victory over its guest Al-Ittifaq team, with three goals against two, in the match that brought the two teams together, on Saturday evening, at the “Mrsoul Park” stadium, as part of the fifth round of the Prince Mohammed bin Cup League. Salman.

Al Hilal scored a double in the first half, through Malian striker Moussa Mariga in the 24th minute and French star Bafetimbi Gomez in the 56th minute..

In the second half, Gomez scored Al Hilal’s third goal in the 61st minute. Al-Ittifaq responded with two consecutive goals, through Abdullah Al-Hazzazi in the 69th minute, and Sanusi Muhammad Al-Hawsawi in the 84th minute..

Al-Ittihad Jeddah professional team, in its ranks, the Egyptian star Ahmed Hegazy, achieved a great victory over its host Al-Nasr team, by three goals against a goal, in the Saudi Clasico, which brought them together on Saturday evening, at the “Mrsoul Park” stadium, at the top of the fifth round of the league competition. Saudi “Prince Mohammed bin Salman Professional Cup League” for the current season 2021-2022.

Al-Nasr occupies the eighth place in the Saudi League standings, after its balance froze at only 6 points out of the total 4 confrontations it has played so far, where it achieved two victories and two defeats.